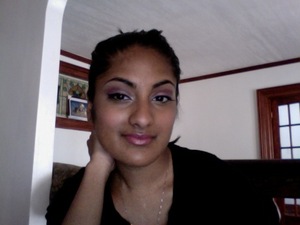 I love wearing bright eyeshadows, but I usually have a problem making the color appear on my skin because I'm darker. I feel like colors really get washed out on my skin, and they just aren't as intense. I usually use a white base after a primer to really make the colors pop.

Typically, I use the NYX Jumbo Pencil in Milk, but I wanted to try something else. I saw this as an eyeshadow primer, and thought it I could skip the primer.

Bad idea. I noticed right away that the color wasn't showing as intensely as I wanted it. By the end of the day, the colors were washed out creasing a bit.

This brush costs $25 and can be found at Philosophy counters/gondolas at Sephora's and Department stores.

I am the type of person who will try any foundation brush, just to find the one I really like. And I have to say, I really like this one. I love that it does give an airbrushed finish when you really buff it into the skin. it doesn't leave streak marks like some of the flat foundation brushes.

It also doesn't have that metal piece between the handle and bristles. I've noticed that if any water gets in the metal, it loosens the glue and ruins the brush. Water really can't go into this brush unless you basically hold it upside down. I love that, because I don't have to worry at all when I clean it.

Definitely a must have for a foundation routine.

I think I have pretty normal hair. It's also very straight, so I like adding some volume or curls from time to time. Before I started using a heat protectant, I noticed that my hair would feel dry when I was done. It would also smoke a lot when I was working on it.

I realized after some time that my hair was losing it's healthiness and the ends were becoming badly damaged, even singed on the ends. It lost it's shine, and silky feel. Truth be told, I didn't want to spend too much on a heat protectant because of how much I'd use it.

I bought this one because it was cheap, However, I noticed a difference in my hair right away. It held my curls longer, and I didn't have to leave the iron in it as long either. It kind of just curled right away. It also left a nice sheen on my hair. It's definitely worth the money.

Was it worth it?

I love Urban Decay products. They're probably one of favorite brands. I love the 27/7 liners in general and before purchasing this kit, I had a few of the colors. I had Whiskey, Zero, Flipside, Ransom, and maybe a few more. I thought I'd be getting a great deal when I bought it, but I found that I don't use as much of the colors as I thought I would.

I bought it basically for the color Perversion (though it bothered me that I realized Zero wasn't as black as I thought it was). I think it's a great kit if your new to the eyeliners and you want to build your kit. Since I had a lot of the liners already, I feel like I wasted money.

I was also left with some drab dark colors, which are great neutrals. It's just not what I wanted.

This foundation doesn't go very dark. I can't wear it because I'm not light enough. I'm actually disappointed because I heard such great things, but I look like a ghost if I put this on.

I probably have like 50 different tubes of Carmex scattered throughout my house, my room, various bags, the car, and in the most random places. I love Carmex. I always hear how bad it is for you, and how it's just a film over your lips, and how it doesn't really do anything.

I just love how it moisturizes. There's this slight burn that I also really love. I feel like my lips are healing because they no longer crack and become chapped. I love this for the winter.

It works on brows

I have pretty decent lashes. I'm terrified to use lash systems because of all the scary things I've heard. I received this product as a gift, and refused to use it on my lashes. I was scared about it staining, or changing my pupil color.

That same week I butchered my eyebrow by accident. My brows looked uneven and too thin on one side. I used the serum on my brows to help the growth process along. I saw a major difference within a few days. My brows are (thankfully) back to normal.

If you're scared to use on lashes, try it on the brows.

So this hasn't been released in stores, yet. I did get to play with some of the colors though. OMG, holographic eyeshadows. One color turns from a deep blue, to violet, to black. It's amazing.

I'm also excited about the new packaging. It's a little more glam being shaped like a flower, and it has like a cute little window to see the colors. I'm seeing a new uniformity within Too Faced, which is awesome.

I've tried to avoid foundation lately, and someone recommended this to me. I have to say that I wasn't sold at first because I was terrified it'd clog my pores.

It doesn't (just so you know). It's similar to the original, but it has a bronze tint that leaves a nice glow on the face. I use only a little to give me a warmer, summer look. I like the way it makes my pores seem invisible, and it also reduces oiliness.