First of all, I don't buy high-end mascaras. Ever. I normally wouldn't invest on something that has to be used up within 3 months.

Anyway, this was sent to me by the good people of Beautylish, and I must say, it's very impressive!

The brush itself is very interesting - it's basically made up of rubbery spikes, with a spiky domed tip to catch the shorter lashes. I wiggle the mascara over lashes, because touching up on areas that I've missed out with the tip. I also use to the tip on my lower lashes.

Overall, this is a lovely product. I have typical sparse Asian lashes, so finding a decent mascara can be tricky. This baby, however, is a dream to use. It's not clumpy and it does separate the lashes, leaving them silky. I like how it doesn't dry up too quickly, nor does it flake.

It doesn't volumize as much as I hoped it would though. Didn't see much of a curling effect either, but I highly doubt any mascara can curl your lashes - you'll still need a proper lash curler. 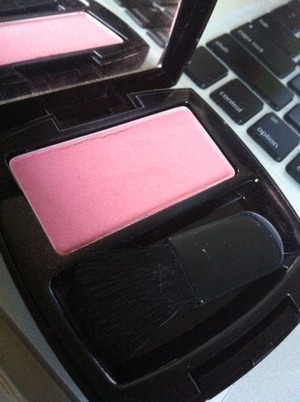 I have this in Rose Lustre - a rosy pink shade with very minimal flecks of shimmer.

The color looks lovely on my NC30 skin, and pigmentation is excellent. Definitely something you don't want to wipe on without first tapping off excess from the brush. Staying power is pretty decent - about 5-6 hours (even after patting compact powder over it to touch up) in humid weather, on oily skin.

The packaging is a tad too big for my liking, but it comes with a mirror. I don't use the inclusive blush brush though. Good price for a substantial amount of product.

Extremely gentle cleanser, perfect for sensitive and/or acne-prone skin. I use this in the mornings, and it does a good job of removing oil and whatever minute dirt I may have the night before.

I wouldn't recommend using this to wash off makeup - makeup should be removed separately with a cleansing oil or makeup remover anyway - and this just comes after that to get rid of residue.

Fragrance-free, comes in a big bottle for a good price and doesn't dry out the skin. Definitely a staple.

I tend to spend more when it comes to eyecare, and when my Clinique All About Eyes ran out, I thought I'd give this one a try.

The claim - refreshes, tightens, brightens. And I believe like all eye creams, it moisturizes to an extent. I've been using it for about 3 weeks now and I am quite impressed.

I used to have really fine lines, but those have somehow disappeared. I like how it's creamy but not oily, and it absorbs really fast so it's a breeze to apply in the mornings before eye makeup . No fragrance, which is a plus. It comes in a 20ml tube, which is a fair bit of product if you use sparingly. Plus, no messy application coz all you do is squeeze out the amount you want.

I'm giving it only 4 stars because of its price, and also despite claiming to brighten, my undereye circles have shown no signs of dissipating at all. But nothing a little concealer won't solve! 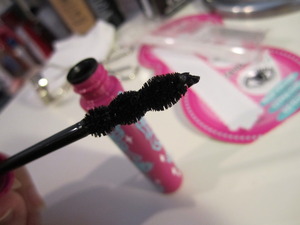 The mascara I'm reviewing is by Fairydrops, but looks kinda different from the picture above. Anyway, I love this mascara because it's perfect for Asian lashes.

It separates each lash, coats it evenly and holds the curl well. It probably has something to do with the bubble-shaped brush, but I find that it also helps define the curl of your lashes. No clumps either.

It doesn't flake nor smudge, which is a big plus point in every girl's book.

Highly-recommended, especially for those with short/sparse/thin lashes. This really helps make a difference. 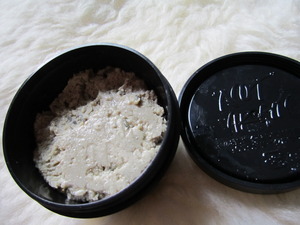 Decent but not really for oily skin

The LUSH SA recommended this product as an everyday cleanser for all types of skin. I have been using it for a week now, and so far so good.

I like the lavender scent, I like the creamy and not-too-rough texture and I love how my skin feels after. It's definitely not drying, but those with oily skin might want to give this a miss. I have a feeling the presence of lavender oil in the mix might give oily skin an extra layer of sheen. Not ideal.

With that said, its gentle exfoliating properties does wonders to prep skin for toning and moisturizing later on. I use this at night after I take off my makeup.

For those who have never used LUSH's cleansers, this product can be a little messy (you basically take a pea-sized amount of the creamy-grainy cleanser and make it into a paste with water) so I'd recommend using it in the shower. 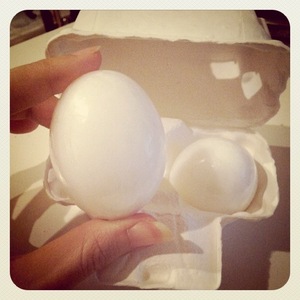 Holika Holika is a Korean skin care and cosmetics brand. I read about their Egg Soaps online and when a store opened up in Singapore, I knew I had to get my hands on them to try out.

I bought the Egg Soap White Original in a set of two. The white egg soap is a cleanser which claims to tighten pores, reduces sebum and smooths out skin. You wet your hands, run the egg under water, rub it on your palm till it lathers up and then use the foam like a regular face wash.

I must say it left my skin rather taut and smooth, without being drying (I have oily and acne-prone skin). A little goes a long way, and I reckon one egg can last about a month or so with daily usage. I'm not too crazy about it's rather overpowering floral-ish scent. I think most Korean brands are heavily-scented, but if you can get pass that, this is a rather interesting buy.

Hopefully in the long run, this soap will improve my skin. I'd love to try the Charcoal egg (reduces blackheads and controls sebum) and the Green Tea egg (exfoliating and moisturizing) as well!

The Lash Serum really does work, but of course within realistic expectations. My lashes aren't super long to begin with, but they aren't super short either, probably a bit in between.

After using this daily, I have noticed that my lashes have become healthier and they fall out less. Length-wise, I'd say it probably did make them a bit longer, because people have been pointing it out, when they hardly did in the past.

Overall, it's a good product and it lasts a long time too. Worth the price and also does what it claims.

I got this in Australia under the recommendation of the MA.

It's very, very watery, which is a terrible texture to control when squeezing it out of the tube. Plus, it leaks!

Coverage is too sheer for my liking - you'd have to apply lots of layers under your eyes, but that in turn will cause creasing and highlight fine lines.

MAKE UP FOR EVER Face & Body Liquid Makeup

After reading reviews all over the Web on this product, I caved in and got one in shade 34. I have combination, acne-prone skin, and a lot of liquid foundations make me look like an oily mess at the end of the day.

This, however, is fantastic. It literally melts into your skin, and yes, it is rather sheer but the awesome thing about this is that you can layer and layer until you achieve the coverage you desire. The texture is gloopy, but nothing a little shaking and blending won't fix. My face does not get too oily as the day go by (unlike when I use Revlon's Colorstay or MAC's SFF), although I would still have to blot a couple of times.

It photographs wonderfully - you won't look like you have foundation on - which is amazing.

And for the price you pay, it comes in a decent size and I reckon it can last you for a long time even with daily application. The half star was taken off because I think it made me break out a wee bit.