Exclusive! A Look Inside the Career (and Kit) of Makeup Artist Tabby Casto 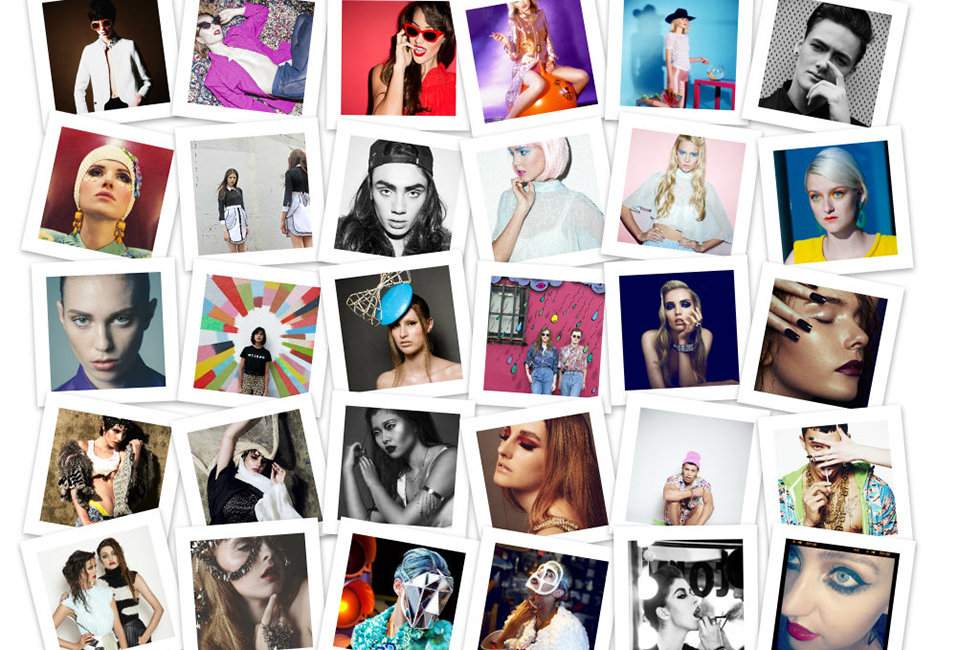 Applying makeup on a client and writing about makeup for a magazine are two totally different things, says Tabby Casto, but the London-based multitasker wouldn’t have it any other way. “I didn’t plan on becoming a makeup artist,” she explains. “From an early age I wanted to be a writer and focused my energy on writing and journalism until I realized that I felt more passionately about color and creating through this media.” 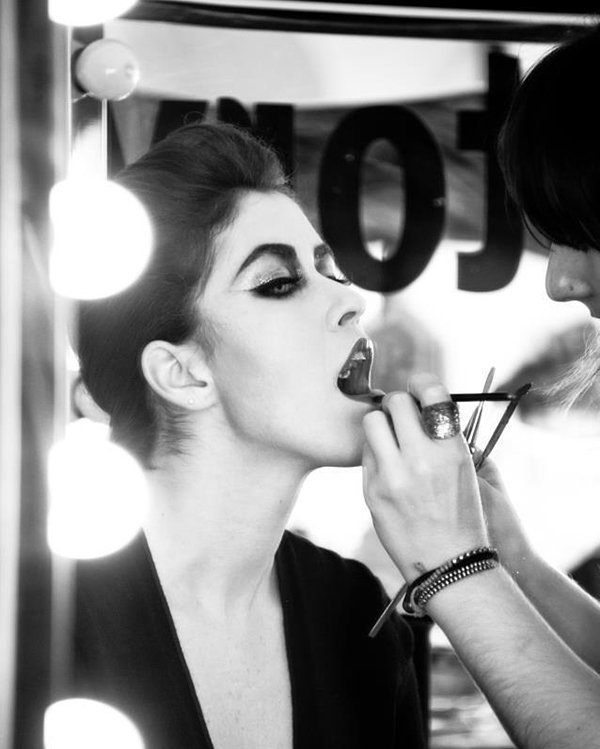 Although Casto was born in Norwich, she moved to small town America (Merkel, Texas) when she was six, which was a “culture shock”—one that brought out a rebellious streak that had her experimenting with creative makeup and goth culture. She ended up moving to the UK when she was 17, Casto surrounded herself with like-minded colorful characters. That meant assisting makeup artists, interning for magazines, meeting photographers, and lots and lots of networking. All of it helped her build up her career, which she describes now as “24/7 makeup, makeup, makeup.” Over the past seven years, she has freelanced on shoots for musicians like Bryan Ferry (Roxy Music) and All Saints, designers including Ted Baker, Lucy In Disguise, and Angie Leng, and done makeup for Harpers Bazaar, Vogue Turkey, and Vogue Italia. 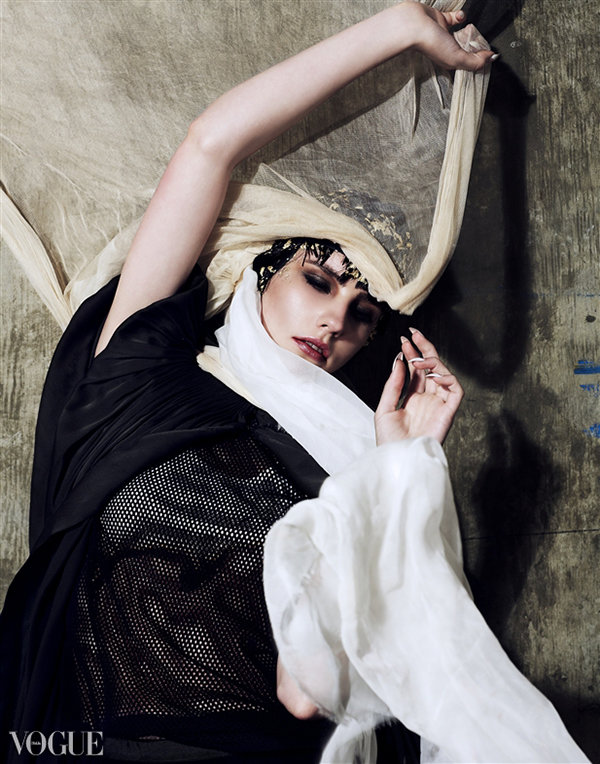 And Casto’s still hungry for more. “Although I’m proud of what I’ve achieved, I strive for more every day,” says Casto, noting she’s very proactive about keeping journals with her goals clearly written down. “I also don’t think there are breakthrough moments in this kind of career. Building up a network of clients comes through a lot of hard work,” she says. Being in her hometown, London, has certainly helped: “It’s literally the center of the world so there’s a lot going on here if you look at everything as an opportunist.”

Casto, now 29, is the first to admit how that city has shaped her creative style. “I always thought I would fall in love with more couture-style makeup, but I really love the experimental and punchy use of color that is affluent in London,” she says. She works with a lot of young designers, who influence her work as well. “Londoners in general are such a mixed group that anything goes, and being in an environment where there are no rules is great as you just tap into what inspires you.” 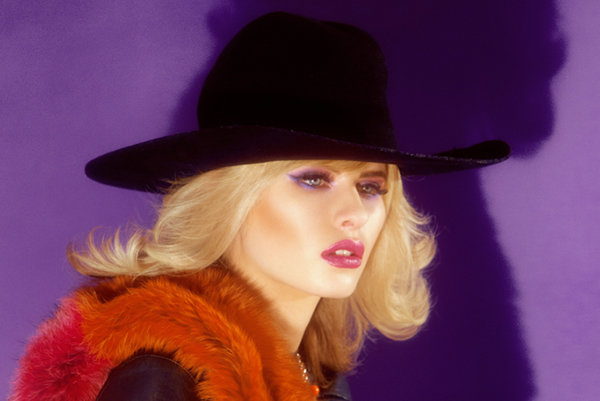 When we chatted with Casto recently, she told us about her oddest client request (involving PVC), the beauty mistake she’ll never make again, and her advice for budding artists.

So what’s biggest difference between doing makeup and writing about it?

“When writing about makeup, I think more objectively and plan a lot. I like to work on pieces over time because I can think about what I’m saying. When doing makeup I don’t really ‘think’ about it. I just see colors and a face and change the dimensions of each. With writing there is a lot more to consider. Words are powerful and can be misconstrued.”

You’re self-taught. How did you learn technique?

“I’m self-taught to some degree, with years of practice! You’ll hear a lot of makeup artists say ‘You’ve either got it or you don’t,’ and I feel there is a lot of truth to this. With makeup you either throw yourself in, get messy, learn from your mistakes, and then flourish—or you don’t have what it takes to be a makeup artist. There has to be a degree of no fear.” 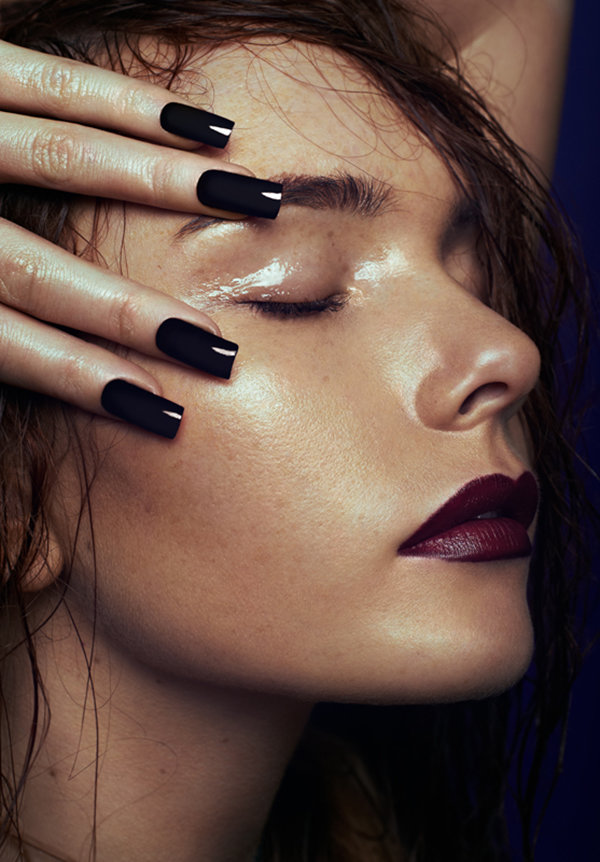 What was the first makeup product you purchased?

“I was 4 years old and my mum bought me a little white Tinkerbell Powder compact and lipstick. However the color pigment was like 2%, so there was no chance of me painting the walls with it. After that, I can remember buying blue eye shadow as a teenager. I had some awful makeup phases, one of the more extreme was a goth phase when I used to put red lip pencil in my waterline. It’s an edgy look that works for some but it wasn’t my best phase!”

Would you say that was your biggest beauty blunder?

“Yes, I think the blue eye shadow all the way up to my eyebrows when I was in high school was a little shocking! At the time I thought it looked pretty cool, but I probably looked a little crazy. In terms of the industry though, one of the blunders that I had to learn the hard way is that the community is actually quite small. Word gets around and everybody has a connection to someone.”

What would you call the look you now wear every day?

“Natural and glowy. I like simple makeup in the day: BB cream, coral blusher, lots of mascara, a mineral powder to set everything and lots of highlighter. If I can be bothered I’ll put on a black liquid liner with a flick as well. I like a more natural look because I need more sleep in the morning! It’s also better because it takes less maintenance in the day, when my concern is making a client or model look their best.” 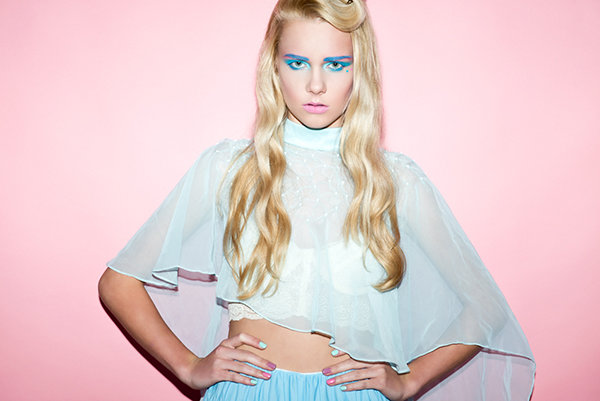 “I love playing with trend- and fashion-inspired makeup. I recently tried out the white eyeliner that was at the Kenzo SS14 shows. Surprisingly it brought a lot of compliments. It’s also nice to see the return of glitter. I know most makeup artists have their reservations, but personally I love it. For spring, Christopher Shanon, Haider Ackermann, Chanel Couture, Antipodium, and so many more were using glitter either full-on or touches here and there. In terms of street makeup, there’s crazy hype around highlighting and contouring, I think largely due to Instagram and celebrity culture. Makeup artists have been doing this for years, but suddenly everyone is requesting ‘contoured’ cheeks.”

What has been your oddest client request?

“A very mature lady came to me for pretty hardcore makeup. She was going to a party at the Torture Garden [a fetish club in London] and wanted something to match her PVC outfit!” 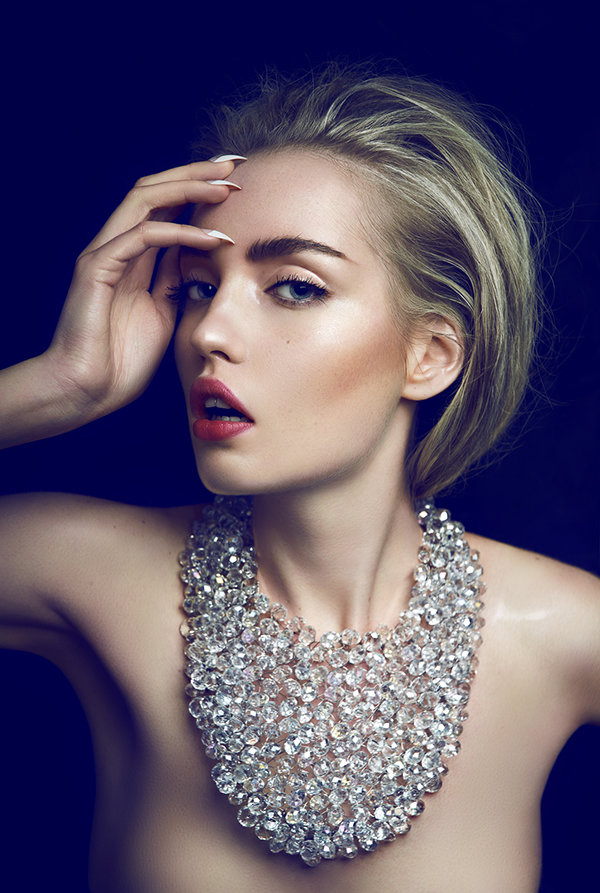 Any advice for budding makeup artists who’d like to make it their full-time career?

“Assist! Gain hands-on experience from people who inspire you. Stay true to yourself as well. The industry is all-consuming and not always glamorous so you need to hold your own. Listen to your instincts and if something doesn’t feel right, usually that’s a gut feeling that shouldn’t be ignored.”

Have you experienced anything that was not so glamorous?

“One of the more interesting things of being a MUA are the locations you end up working in. It’s not all studio dressing rooms and gorgeous natural light. I’ve had to do makeup in so many weird places: a coffee shop, a man’s cubicle, in the back of a van, on a windy beach. Putting fake eyelashes on someone in the back of a moving van is certainly not ideal, but you gotta do what you gotta do. I wouldn’t take back any of my experiences as each of them has helped to shape my professional manner today.” 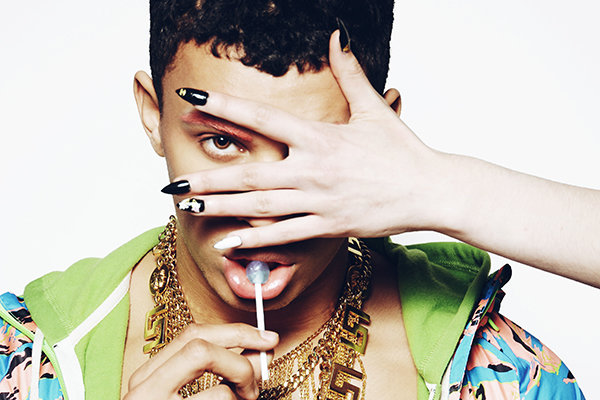 You’ve done work for a lot of bands including Bryan Ferry. Any stories you can share?

“I think a real highlight for me was getting the opportunity to make up the ’90s R &B girl-band All Saints. I used to listen to them as a teenager and had posters on my wall—I still listen to them actually. I had to really dial down the inner fanatic inside, but they were really lovely ladies and just so gorgeous. Nicole bought myself and the hairdresser some sushi for lunch, and it was interesting to sit around their kitchen hearing about their lives as a band traveling around in the ’90s.”

If you could have done makeup in any decade, which would you choose?

“Ooooh so hard to choose. Either the ’20s or the ’60s. The 1920s makeup style was not messing around—that was glamour at its best. I loved the blown-out smoky eyes paired with the little dark cupid’s bow lips. But the ’60s looked like great fun, too, with the Biba-esque smoky looks and the playful nature of flower power.” 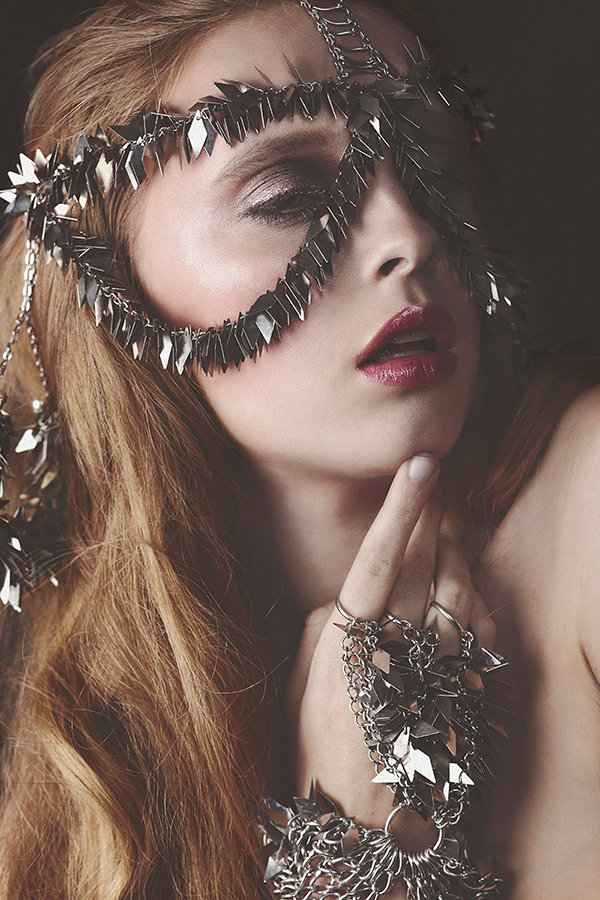 What are some of your all-time favorite products and products of the moment?

Who are some of the people you follow online?

“I follow a lot of agency MUAs and creatives such as Lan Nguyen, Kabuki & Timothy Hung. I’m interested in the new generation of artists who are doing things a little differently. I also follow a lot of illustrators; they’re the ones behind the scenes doing some pretty interesting work.” 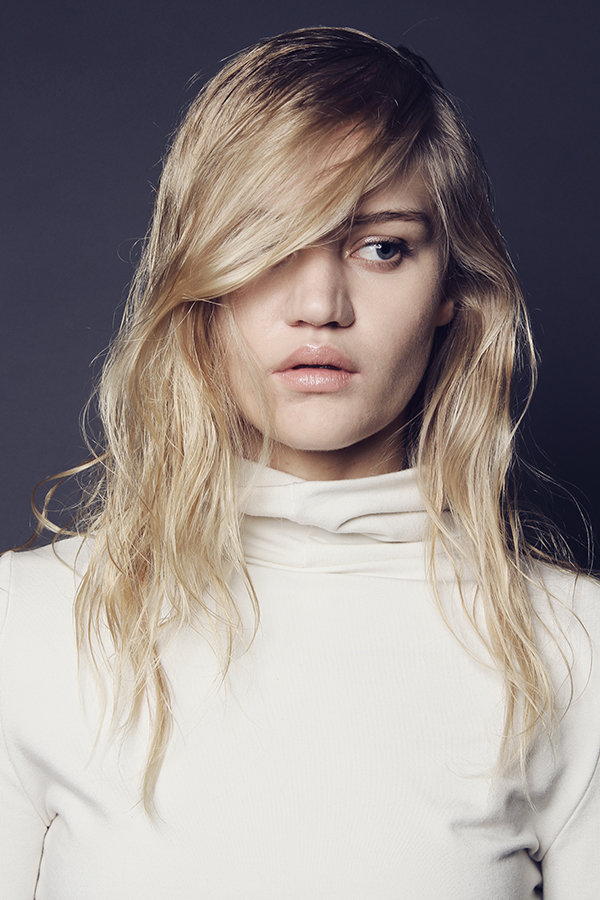