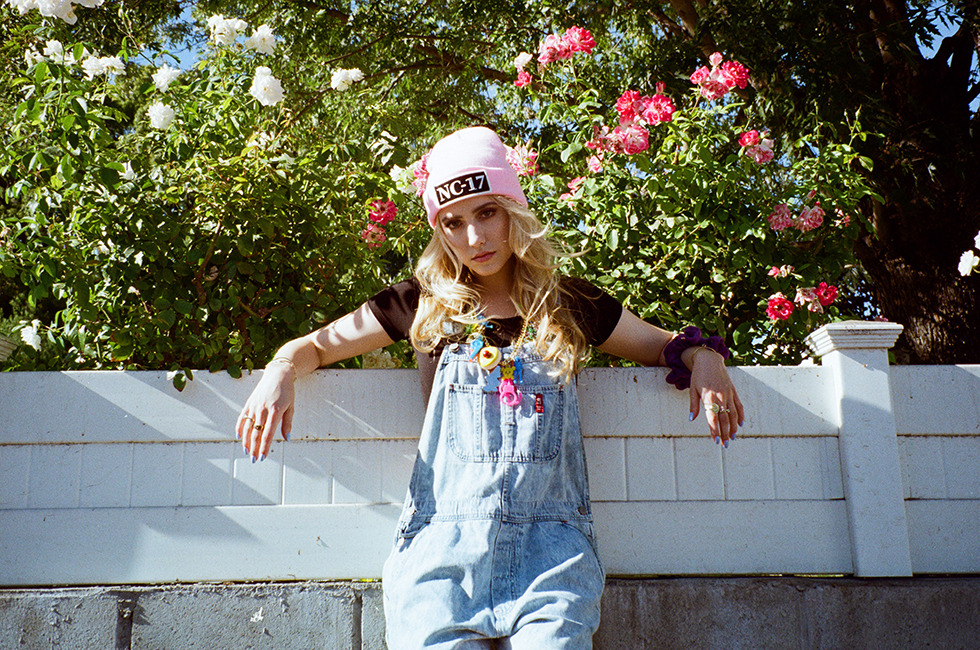 Over the past two decades, there was Beyoncé, Aaliyah, Brandy, and Ashanti; for 2014, there’s LIZ, a So-Cal one-named-wonder aiming to be the R &B superstar for a new generation. Just don’t call her retro...unless you’re talking about her fashion sense. With a rotating closet of brightly colored jerseys and beanies, high ponytails, and low-hanging gold chains her aesthetic is a mix of Lisa Lopes and Lisa Frank.

“I have gone back to how I used to dress when I was really little,” she says, laughing. “I would wear Timberlands when I was like seven, with big hoodies and leggings under shorts. There was a time when I tried really hard but now I’m just like, ‘I’m going to be comfortable and cool.’” 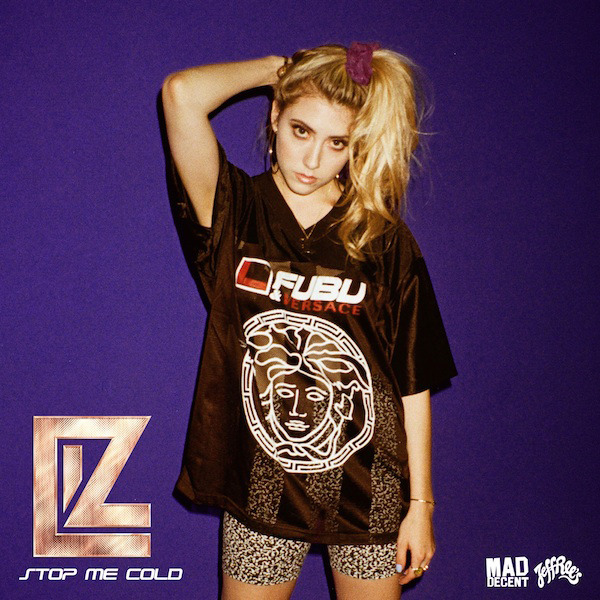 That carefree attitude applies to her music as well, where the 26-year-old admitted “pop star baby” also seeks comfort in the music styles she grew up on, including a steady mix of Mariah Carey, 3LW, and *NSync (see her doodling an ode to JC Chasez in the video for “Hush”).

“I’ve always had a soulful voice, so people call it R &B,” LIZ explains of the ’90s connection. Yet completing a new EP and full-length debut (arriving later this year) with modern producers like Diplo, LIZ’s work is far from a throwback—and the mix of old familiarity and new sounds have created quite a buzz for her the last few years. 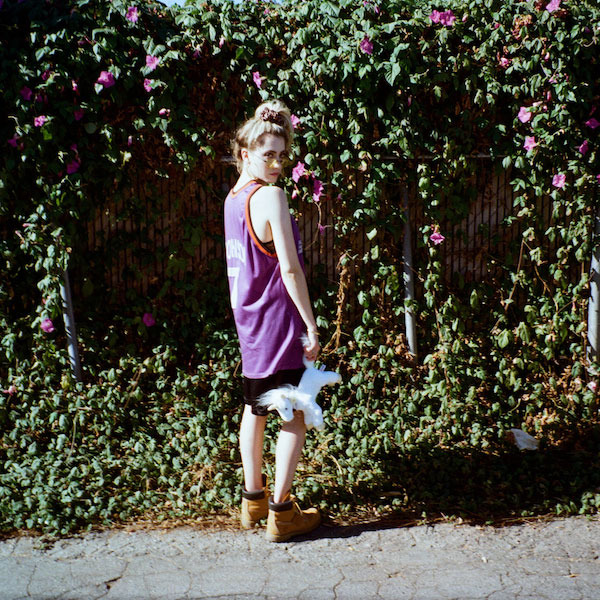 The Los Angeles–based starlet, who began her entertainment career working in TV and indie films when she was just nine years old, moved into music a few years later, earning acclaim for hyper-melodic songs like “Hush” and “XTC.” Though she’s been profiled twice in Interview magazine, received love from VICE, LIZ remained fodder for the underground scenesters who loved her ironic style. Then, last fall, she embarked on her first-ever tour with U.K. pop star Charli XCX. She hired two dancers to join her on stage (“totally TLC-style”) and found a not-so-surprising new audience: tweens.

“We did some all ages shows, and there were these kids that showed up who had so much energy and were singing along,” says LIZ. “I love that I can connect to a young fan base as well as my peers. Kids carve out what is popular and are really determining what the future of music will be.” Spoken like someone who was in that position not so long ago. 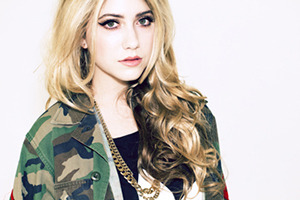 “My hair is naturally really straight and flat,” says LIZ, so it takes an arsenal of tools and products to get the loose, beachy waves she prefers. The singer starts with Enjoy Volumizing Dry Shampoo. “I like it because it’s sulfate-free, which helps preserve my highlights.” Next, she sprays on Big Sexy Hair Root Pump Mousse while her hair is still wet, and then blow dries it all the way through.

To get the waves, LIZ uses Conair hot rollers and a teasing comb. “I section out pieces of hair, apply hair spray at the root and then tease before putting in the roller,” she says; Redken Quick Dry 18 Instant Finishing Spray is her go-to. “Then after all the rollers are in and have set for awhile, I’ll spray my entire head with hair spray, take the rollers out, hair spray again, and then tousle it with my fingers.”

The look lasts about three days, even with all those hats she wears. “I somehow don’t get hat hair,” she says, though she advises avoiding hats that are too tight to prevent dents and creases. 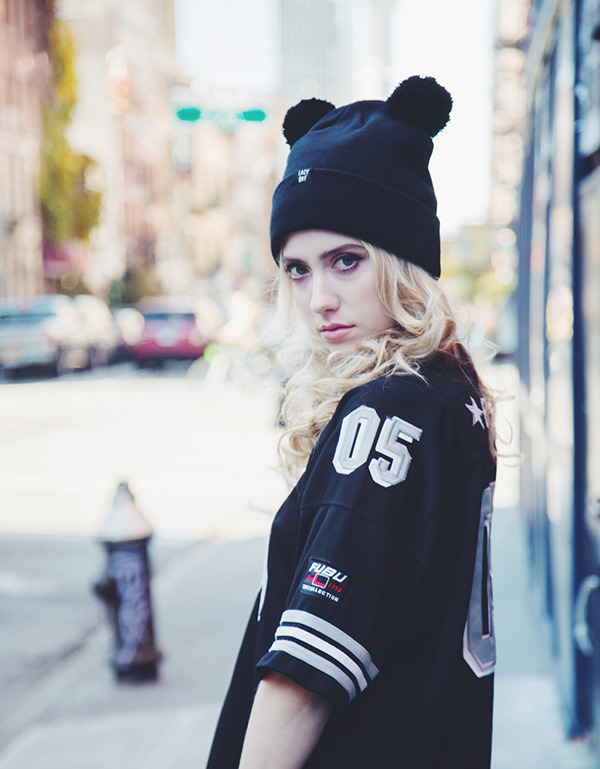 Eyes are LIZ’s favorite feature to play up. She uses a five-color combo of shadows to perfect the look, perfect for everyday and the stage, mixing MAC in Black-Tied Velvet and Antiqued with Stila in Twig and Kitten for her base, crease, and under-eye. To finish the look, she applies a bit of MAC in Vanilla to the corners of her eyes and along the brow bones. She also uses it as a highlighter on her cheeks, too. “I’ll put it on after my blush to get a shimmery, dewy cheek,” says LIZ. For a winged out cat eye, MAC’s Fluidline gel liner in Blacktrack does the trick, and occasionally, she adds false lashes, mostly when she’s going to be on stage.

For foundation, LIZ prefers ERA Face Spray-On Foundation: “It’s water-based, so it won’t clog your pores.” She sprays the product into her hand and then applies it using a BeautyBlender (an egg-shaped sponge) to blend. To set, she uses Make Up For Ever Super Matte Loose Powder. 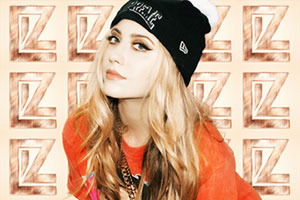 LIZ typically goes for a neutral lip, and gets her perfect shade by pairing Bobbi Brown Creamy Lip Color in Pale Mauve with Stila Long Wear Lip Liner in Aspiring. (It’s discontinued now, but an alternative would be Stila Stay All Day Liquid Lipstick in Bellissima—a neutral pale pink that works great as a base to prolong your lip color.) But when she does occasionally opt for a bolder lip look, NARS Pure Matte Lipstick in Mascate is the only red she trusts. “I have very pale skin so you can see everything, which means that dark lipsticks can get kind of feathery. NARS is great because it just doesn’t bleed—it stays put, even when you drink or eat.” Or sing your heart out.