Attention pale eyelash-owners! Did you know you can get them tinted? 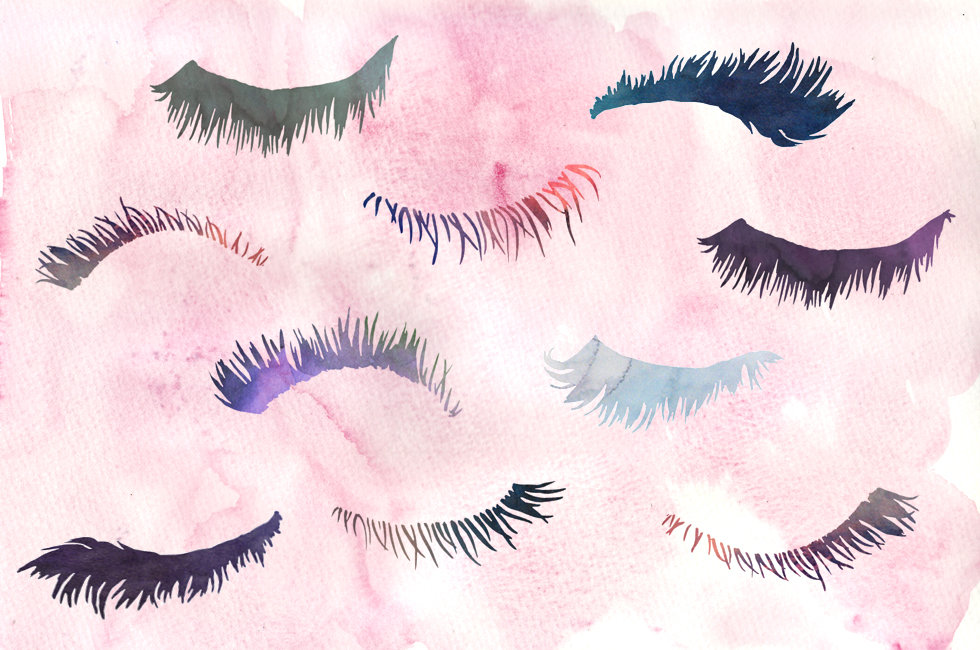 My girlfriend has very dark, very long, and very thick eyelashes. When she shuts her eyes, they shine glossily in the light, fanning out like a furry mink trim along the tops of her cheekbones. She does not wear mascara. She casually rubs her eyes when they itch with her fists. She cries freely during sad movies without dabbing at her lashes with tissues; she wakes up and looks as if she’s wearing perfectly applied makeup.

This fills me with jealous rage. I have very light blonde eyelashes; in fact, they’re pale blonde at the bottom and white—almost translucent—at the tips, meaning that they look as if they’re not there at all. If I don’t wear mascara, and lots of it, people ask me if I feel ok. “You look different,” they’ll say at work. “Late night last night?”

Harumph. What must it be like, I wondered, to wake up with dark lashes? To sweat without having inky streams run down your face, to rub your eyes lavishly and with abandon?

Enter eyelash tinting. I’d seen signs at salons advertising eyelash tinting for years, but I hadn’t tried it. Dye for your eyelashes? This sounded like a silly and needless procedure. This also sounded dangerous, as in plz do not put dye near my eyeballs, thnx. And yet...what if this was the answer? Worth a shot, right? It’s not like it was expensive—most eyelash tinting sessions can be had for between $12-$24. It was time to try. I googled “best eyelash tinting Chicago” and made an appointment at a salon with high ratings near my house.

Getting your eyelashes tinted doesn’t take very long, but it’s an interesting few minutes. I walked into the salon on Saturday and an esthetician chirped, “Oh! It’s 12:30 already! Are you here for the brow tint?” (Sidenote: I did not know you could get your eyebrows dyed.) “No,” I said. “Eyelash tint.”

“I could do them both at the same time,’” she said, giving my near-invisible eyebrows a quick once-over. “It would take the same amount of time.” I laughed, uneasy. “Just the eyelashes this time, I think.” Everything was moving too fast, you guys. She seated me in a tall chair and handed me some eye makeup remover and cotton pads so I could wipe off my mascara. “Wear contacts?” she asked. I did. The esthetician (we’ll call her Anna) handed me two little cups of saline to put my contacts in. Hooray, now I was blind in public.

Anna didn’t believe in babying her clients. Without warning, she set to, applying a thick layer of Vaseline under my bottom lashes, which felt bizarre. “So the dye doesn’t get on your skin,” she said as she smeared more on. She placed a sturdy, curved paper under each eye over the Vaseline and said, “Ok, so I’m going to apply the tint now. We’re going to be using a dark brown for you, and you’ll need to keep your eyes shut- totally shut - for eight full minutes. Do you think you can do that?”

I nodded, but inwardly I suddenly felt unsure. Could I actually keep my eyes shut for eight minutes while fully awake and in public without sneaking them open? Suddenly, eight minutes without peeking felt like a dare. Anna was mixing up the tint in a little cup. “Now, this might feel a little funny,” she said. “The only way I can describe it is ‘peppery.’ It just feels peppery—not burning, not stinging, but peppery, and it smells kind of peppery, too. It is really important you keep your eyes closed for the full eight minutes—I’m going to set a timer, but if the feeling gets to be too much, we’ll take it off early.”

I obeyed, and Anna proceeded to use a small brush to coat my top and bottom eyelashes in a cool liquid. It did! It did feel peppery! It also felt odd—I was sitting in a tall chair in a busy salon with my eyes shut while people chattered around me. Anna left my side, off to tint someone else’s eyebrows. I spent the first minute or so quietly freaking out that I wouldn’t be able to keep my eyes shut for eight minutes, but then decided to treat this like a mini-meditation session, and relaxed. I heard two girls talking about their brunch plans: “You want a benedict after this? You always want a benedict” and I heard a woman talking into her cell phone about a fitness class she’d just taken: “You’d love it! It’s like Zumba but fun and cool, with good music.” I was in the zone; I could have lasted for hours with my eyes shut.

The alarm for my lashes rang, startling me so much I almost fell out of the chair. Anna came bustling back, carefully lifting off the paper covers under my eyes and then wiping them with some kind of remover. “Oooh, they look good - OK, open!” I opened my eyes and there Anna was, standing over me with a big bottle of saline, which she squirted into my eyes without warning. “Blink, blink, that’s good,” she crooned, handing me some tissues with more remover on them. “Ok, wipe your eyes hard!” she said. “Reeeeallly wipe….great. OK, you’re done! Wanna see?”  She held up a mirror.

I blinked at my reflection. My eyelashes. They were....they were BLACK. And glossy! And long! They looked like they were naturally that way! I looked awake! I looked like I was already wearing mascara!  “Big difference, huh?” Anna grinned. “That’ll last for about six weeks. Enjoy your new lashes!” She patted me on the back and flitted away, off to do her good deeds for another soul, the Florence Nightingale of eyelashes.

I paid at the register. I kept touching my lashes, amazed that they were soft and black and that I could touch them as much as I wanted. Later that night, my girlfriend and I went to a sad movie, and I cried in the theater without dabbing at my eyes. In the morning, I woke up and rubbed my eyes lavishly and with abandon, and then went to breakfast with no mascara on whatsoever. My lashes look great. Y’all, lash tinting is a miracle. A MIRACLE.