Condragulations! By clicking on this interview you’ve just taken the first steps in becoming a scholar of drag history. Now turn off Logo and pay attention. 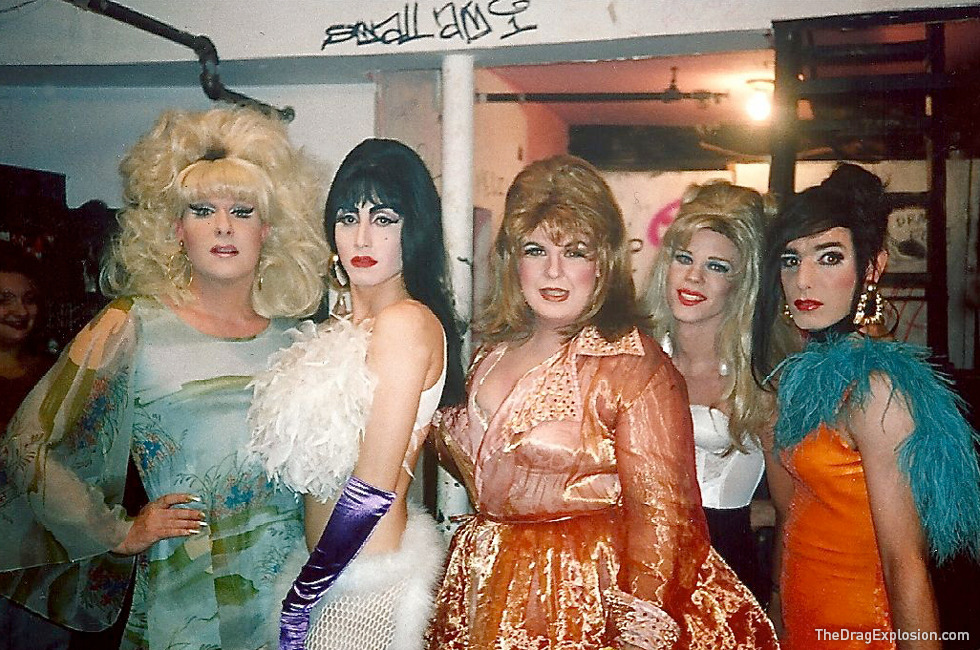 Before RuPaul’s Drag Race become a national phenomenon (what some call the “Ru-pocalypse”), before the days of step-by-step contour tutorials on Beautylish and YouTube, before the days of colored contacts, cheek implants, and pageant vs. comedy queens, there was drag magic happening in a little town called New York City.

Drag had been making waves in the underground scenes for decades, but it made it’s first big splash in the ’90s with the popularity of the city’s drag festival (and subsequent film) Wigstock, along with the iconic documentary Paris Is Burning, and, of course, the initial rise of RuPaul with his 1993 hit single “Supermodel.” So, the world of drag was making quite an impact while many of us were still in grade school.

What was this drag renaissance like? Thanks to NYC drag personality Linda Simpson, we don’t have to wonder. Armed with a camera, Linda was snapping away through the late ’80s and early ’90s, documenting the queens as well as club kids (and yes, even Ru) in and out of nightclubs in looks that have undoubtedly inspired many drag artists today. Now Linda has curated some of her most indelible images into an online collection, thedragexplosion.com, as well as published her first photo book with Peradam, Pages, an homage to her friend, the late NYC drag phenomenon Page. Pull out a pen and take a note or two—you’re in for an unforgettable lesson in drag beauty evolution! 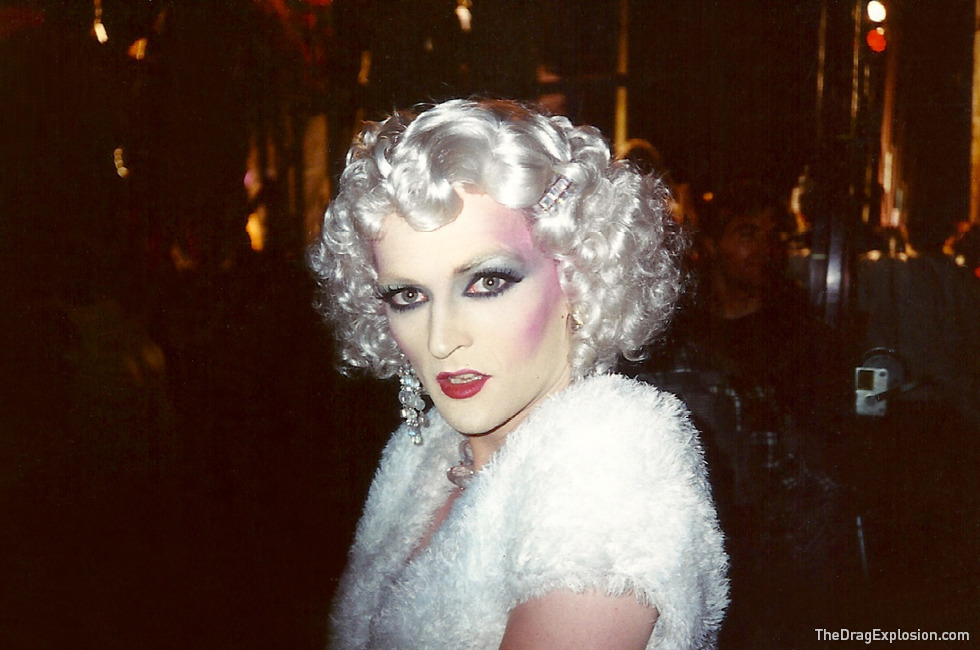 What drew you to the idea for The Drag Explosion and your book?

I’ve been carrying a camera since I was a teen, but my drag photography came together randomly. There were other photographers out documenting the scene at the time, but often they were journalists who really didn’t know the characters of the East Village nightlife as personally as I did. It was also popular then for photographers to shoot in black and white, which I rejected, because in reality, it was such a colorful time. Of course, these photos are not meant to serve as a definitive history of that era. They’re my history. 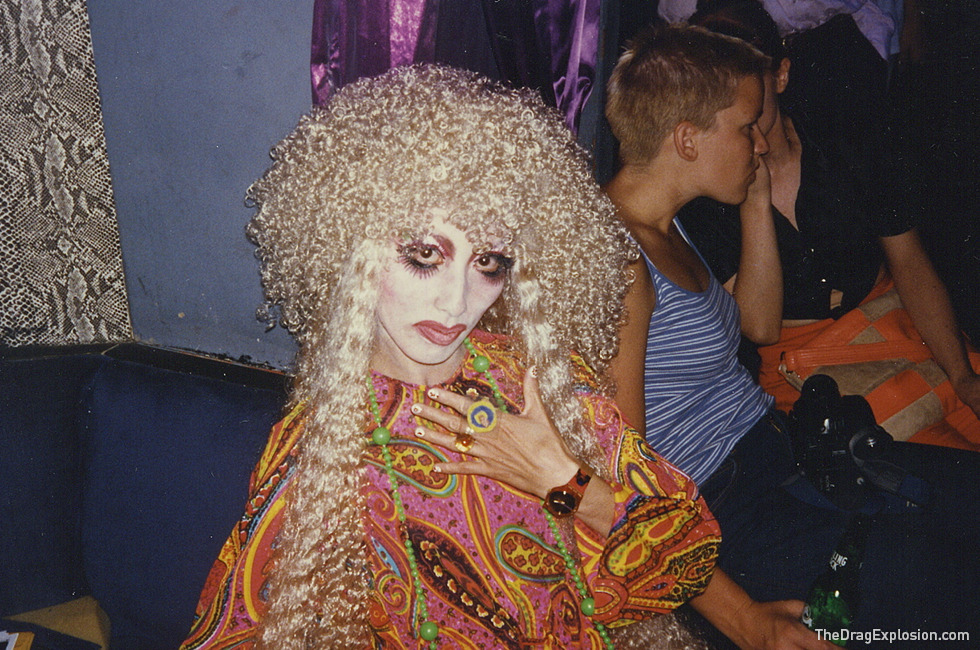 What was drag like in the days before Drag Race? Today it’s become almost the norm!

In the early days, drag was still widely misunderstood. You really had to watch your back, even in a place as accepting as New York. People today are more understanding of what drag means. Back then, those who weren’t involved didn’t know the difference between a drag queen and a transvestite. They thought drag was a sexual thing, or that the point was to pass as, or even become, a woman.

The language is different now, too. In those days, if a person was trans, we might refer to them as “pre-op” or “post-op” which sounds crude by today’s standards. Because no one ever really used the word “transgender,” people that weren’t necessarily drag queens got kind of lumped into the drag category because the right language wasn’t part of the vernacular. 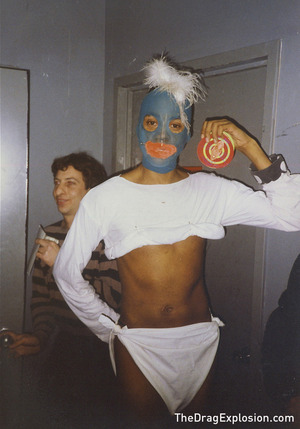 From your photos, it looks like RuPaul was making just as big a splash then as she is now!

Ru was very experimental with her looks, but she hit it big when she went glam and recorded “Supermodel” Around that time, Arsenio Hall had Ru on his show as a guest, which was groundbreaking. The ’90s was the era of the TV talk show, and after Ru made her TV debut, the media came running. Suddenly, many of us were appearing as guests on talk shows. They would bring us on and ask stupid questions like “When are you gonna get a real job?” or “Why do you hate women?”RuPaul did change the world of drag, and when you think about it. The correlation of drag really followed along with Ru’s career—when she was up, drag was, too. When she was down, it wasn’t as popular. Now that she’s back up with her show, it’s a phenomenon again. Ru has also done a lot to give drag a warm and fuzzy element. Not to say she’s exactly G-rated, but she’s definitely a very accessible character. 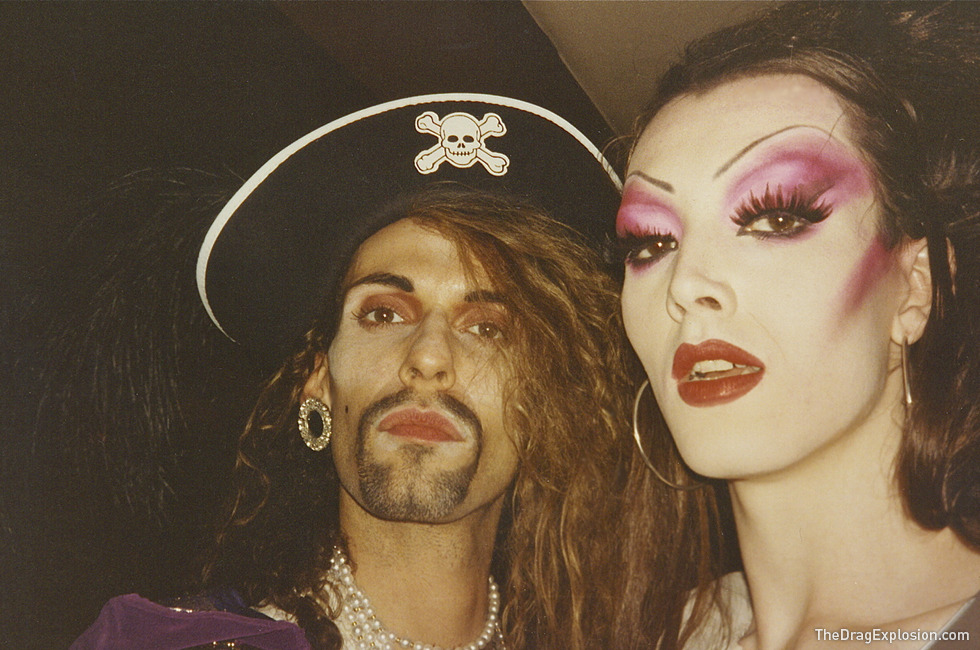 Describe the beauty trends in drag at the time you were taking photos.

The East Village drag look in the early ’90s was very underground: found and vintage items and cheap wigs. No one spent more than $10 on an outfit. At the same time, the Patricia Field store was really the epicenter of the trendy downtown scene and the tight, colorful spandex clothes she was selling were very popular. Queens would bring their store-bought wigs to the shop to get styled as well.

As for makeup, Dermablend was popular for a full-coverage foundation option. You’ll notice in the photos that a lot of people’s foundation appears lighter than their skin tone, because we just didn’t have as many options as we do today. It was an era of experimentation. People would turn to face paint for coverage sometimes. Alcone was another popular resource because it sold both drugstore and theatrical makeup. Also, plastic surgery was not as prevalent in the drag scene as it is now, so we had to get extra creative. Overall, East Village drag was really a parody of drag, and a sort of rejection of the generations of drag that came before it. It wasn’t until our looks became more polished that drag really took off and many of us found a career in it. 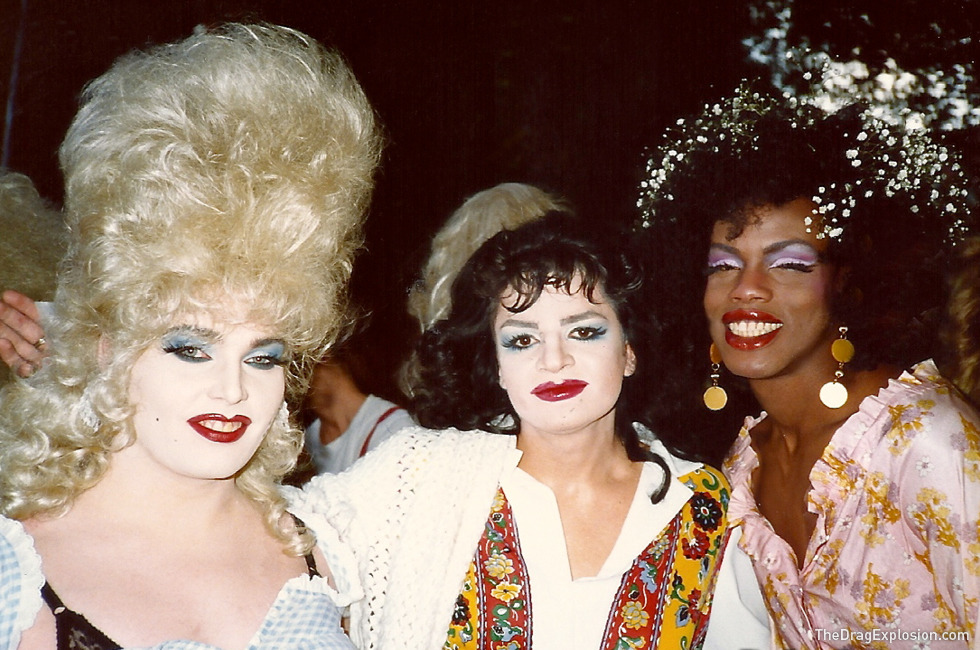 You’ve been quoted mentioning that contouring wasn’t such a big trend in those days. Why do you think that was? Lack of product? Knowledge?

You’ll notice in a lot of my photos that this era was very much, as I like to say, BC: “before contouring.” I don’t have anything against contouring, but I think there’s a typical contouring look that’s very common now. There’s a difference between the naturalistic contouring we did in the ’90s, and what people are doing today. Amanda LePore put it really well: “For men, it’s sports, for drag queens, it’s makeup.” I think a gold standard for many queens today is to show off that they’re really good at contouring. Yes, it shows a paint-by-numbers ability to do makeup, which can be kind of arresting, but it’s becoming homogenized. Back then, we were a bit naive, and didn’t have access to the instruction and tutorials that are available today. Our main inspirations were supermodels, makeup artists, and really, just women. 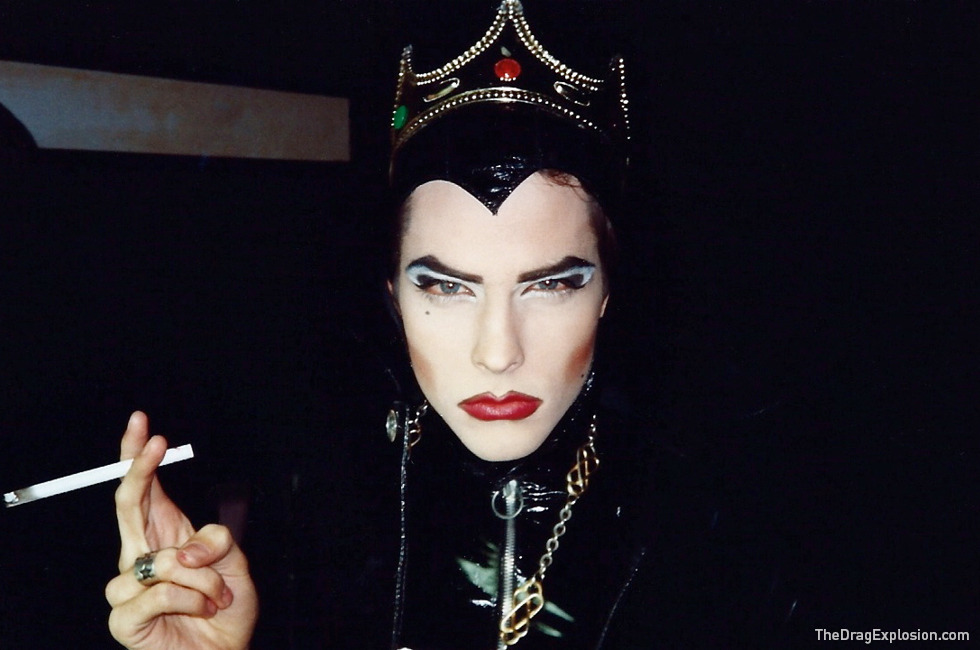 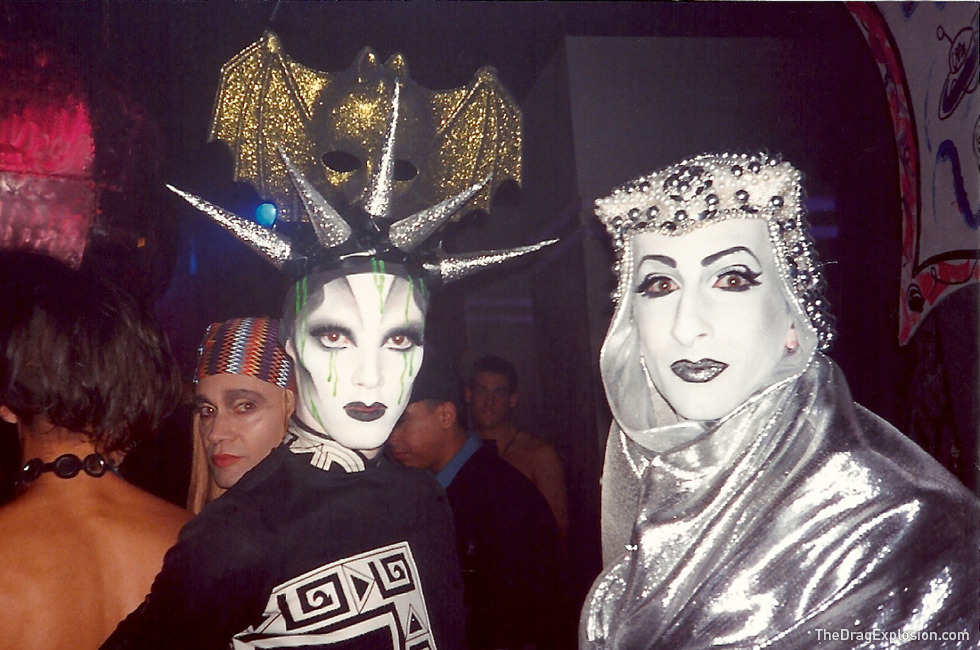 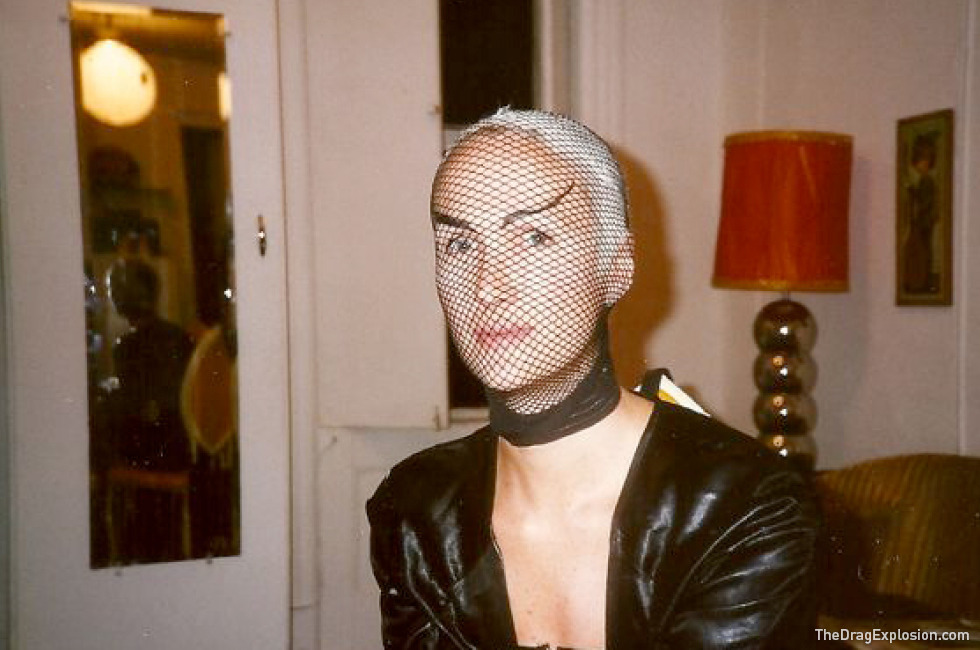 Did biological women participate as much in drag inspired looks back then?

As far as the drag scene goes, there was not a lot of female involvement. The girls working at Patricia Field would do a drag-inspired look with big wigs and corsets, but I think because there wasn’t a burlesque scene at the time, there wasn’t much of a gateway for girls into the world of drag. The club scene was always very full of prominent women—maybe even more so in the ’80s with personalities like Anita Sarko, Diane Brill, and Maripol. As the ’90s progressed, the gay and drag worlds just happened to serve up anything else that was going on in the area at the time. 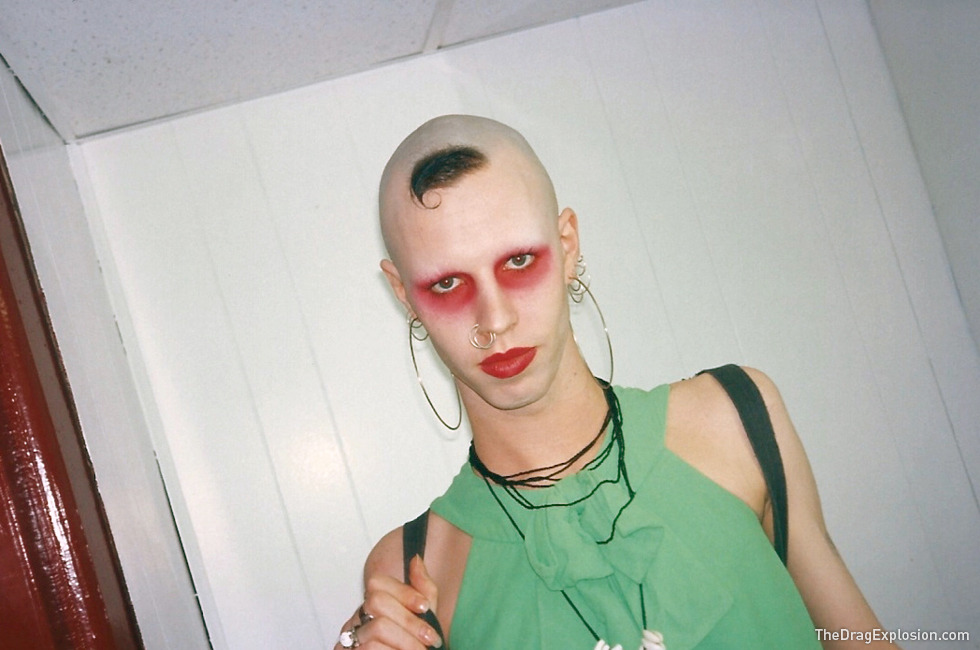 Today we are jaded by Instagram, sharing our looks instantly. How important have your photos been to the creative subjects you’ve shot, as well as yourself?

I would always get copies of my photos to share. Cameras were bulkier back then, and the process of getting film developed was tedious. I’d use the photos as payment sometimes, since there wasn’t always much money involved when I would hire people on to host parties and shows, and people really did appreciate it. I think that documentation is so vital—even if a photo doesn’t strike you as being the best, it’s alway good to keep documentation of your looks.

Advice to young queens of all orientations?

Learn your history. Understanding the drag continuum will help expand your mind as well as your outlook. Also, don’t take yourself too seriously. Drag is silly, ultimately. In fact, it can be downright childish. It’s all about keeping a fine line. Adding an air of snottiness or superiority is a real turn-off. RuPaul’s Drag Race is great, it’s fun, but just remember that it’s only part of the equation.