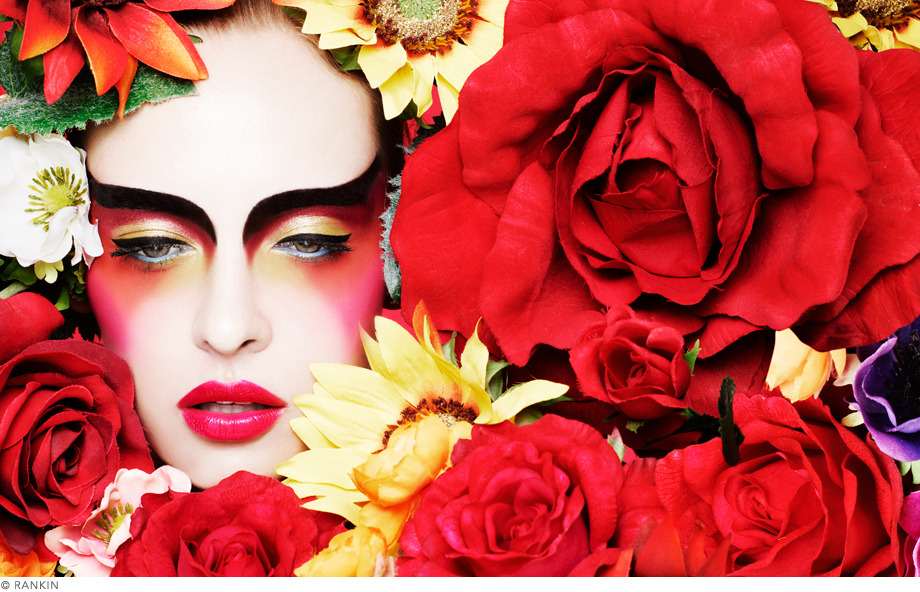 After the success of Alex Box’s makeup monograph, Rankin is back for his second beauty book installment (of five planned total)—this time with acclaimed editorial makeup artist Ayami Nishimura. Known for her extraordinary use of color and no-fear approach to makeup design, the Japanese-born, England-based artist's work has graced the high-profile covers of both Vogue and Rankin's Dazed & Confused alike. A visionary with an intangible makeup mystique all her own, it was only a matter of time before she reunited with close friend Rankin for yet another industry beauty bible. Fascinating color play, mixed media surprises, and pure aesthetic innovation—Ayami Nishimura X Rankin celebrates the makeup artist and photographer’s most impressive feat of visual storytelling to date. Fresh and excited from the book's London gallery opening, Ayami chats with Beautylish about the challenges and delights that come from an anthology two years in the making.

B: What made you want to move to London from Japan back in 1993?

I started makeup in London—before that I was a salon hairdresser. I was trained in small salon in Tokyo and moved to London to do more hair. I went to Vidal Sassoon Academy then worked in a salon in Islington for a few years. In the beginning, people were asking me to do hair for their test shoots and there was no one doing makeup, so I just started to do both. That's how I started my makeup career, and it's been 14 years. I never studied at college and didn't assist any artists apart from fashion shows. I'm sure I took a longer path than other people.

B: How long have you known Rankin, and when did the idea spark for a book collaboration?

We met at Dazed & Confused about seven years ago, and we have worked on so many shoots since then. He is fun to work with! He published his first beauty collaboration book with makeup artist Alex Box in late 2009 and he asked me if I wanted to do the second of the series, we started to shoot straight away from January 2010. 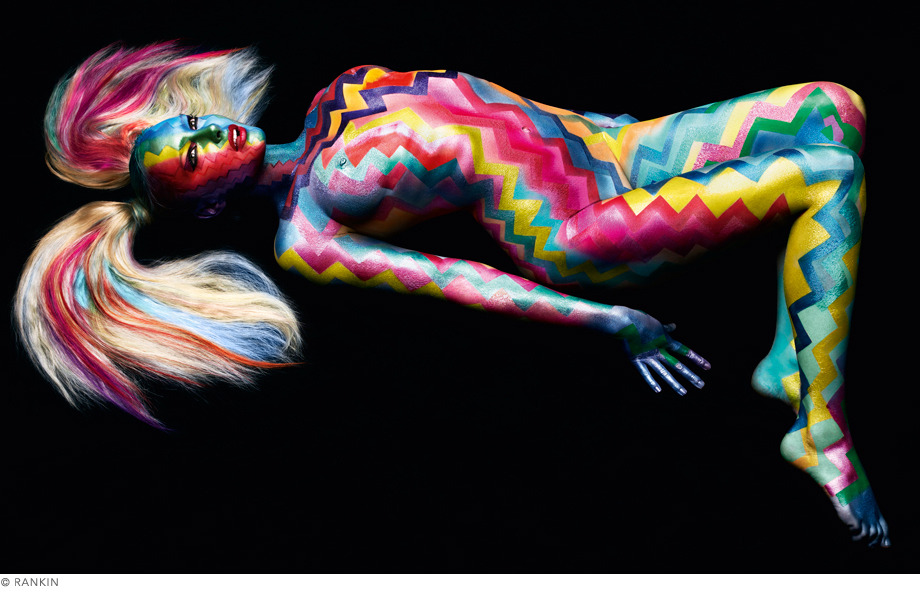 B: How many looks did you create and how much time was spent on each image?

There are about 46 images. It took 15 days, but they were spread out over two and a half years—it was hard to organize a shooting date as we are both busy. If I had all day to shoot we did four images, depending on the idea. Some body makeup took five or six hours to finish—like the Zig Zag or camouflage pattern, but normally it takes around one or one and a half hours to do any ideas on the face. And to be honest, I use anything as long as it's not bad for the skin. Pigments, stickers, acrylic paints... anything to make the look I want.

B: Can you define your aesthetic in words?

I would say my makeup has classic beauty—anything I do. Edgy, yet at the same time classically beautiful. Makeup is feeling, and it's my life.

B: How do you approach your makeup design? Does inspiration hit on set, or do you plan ahead with sketches or written ideas?

I have always done lots of research in many areas—old magazines, photos, animals, paintings, nature, illustration—it really helps to give me ideas and inspiration. I am now in the position of choosing jobs, but [before], I did any shoots that came to me or I planned my own beauty test shoots. Work all the time, then you will find your style.

Regarding this book, I had it all planned before. I had so many ideas in my head and each idea was drawn through sketches, then tried on my assistant's face at home. I had spoken to a prop designer or stylist if I needed something for the shot. Then, I explained to Rankin through email with references if I could find them. It was very fun process approaching other collaborators like prop designers, stylists, hairdressers and nail artists—they put their own spice to make it more delicious. 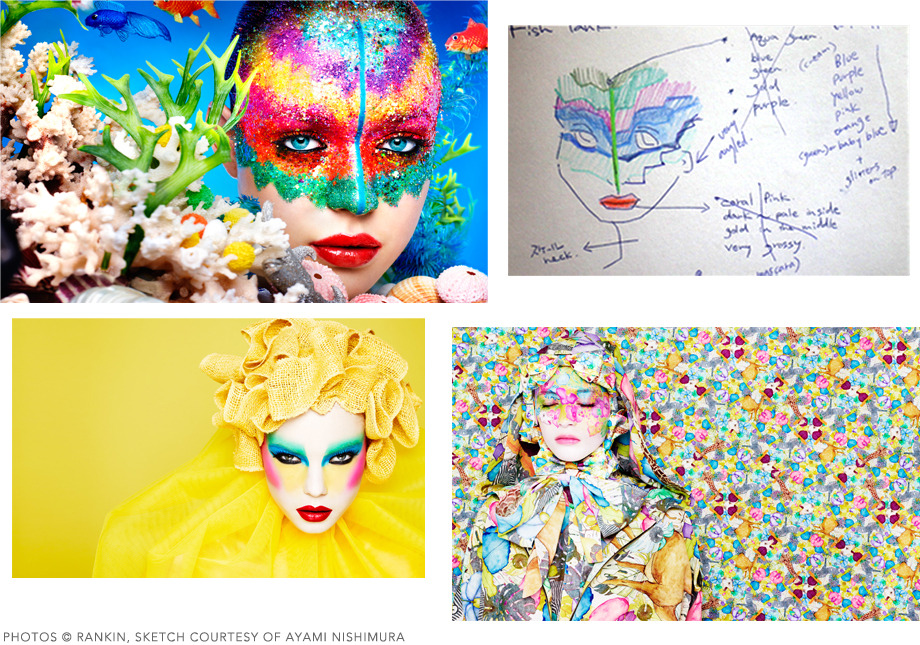 B: The set designers, stylists, and hair artists are so integral to every image—what were those conversations like?

All artists who were involved in my book are top artists in London and are all good friends of mine. I met them before the shoot, showed them my references and explained the story. All of them were excited and put their own ideas and made it even more special, but there are some spontaneous stories.

I was working very closely to set designer Anna Burns who did a lot of props for this book. I visited her studio one afternoon and we went downstairs where she stored all of her props. We were having a look and found plastic seaweeds and shells, and I remembered I had little plastic goldfishes at home—suddenly we were talking about creating a fish tank and doing fish scale makeup on the girl.

B: Rankin gave you directional reign and you went for themes of cyber and Japanese art—both traditional and contemporary. Tell us about the otherworldly cover.

I was interested in H.R. Giger's alien illustration and also the human spine and joints in X-ray. I wanted to come out with makeup that combined these two ideas, and it wasn't easy. I did so many drawings and practiced on my poor assistant—maybe around 15 times? Anyway, there was a lot of time spent developing this makeup.

I had a few meetings with my friend and hairdresser Angelo Seminara, who I think is the best for creating shapes and hair colors. He somehow brought the Geisha feeling, which I love about this hair.

I really wanted to have a Gareth Pugh dress from his 2010 collection and spoke to my friend who is a consultant for the designer Katie Shillingford. She brought few dresses from his archive. Everything looks perfect in this shot. 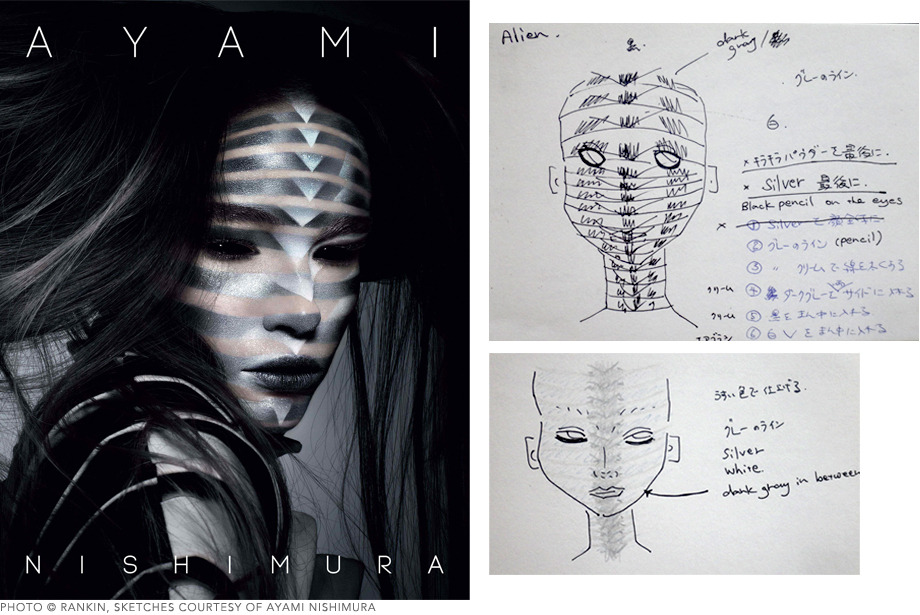 B: So this was probably the most challenging shot, and your favorite?

Alien-meets-X-ray was not easy to do, and it is the most beautiful ever.

B: Perhaps the hardest task of any creative is to take what's in your head and translate it to something tangible. How did you accomplish this with Rankin?

It's not so difficult. My ideas were always very clear and each idea has a story to tell, so I just had to find the closest images to show him as a reference and explain what I was trying to say.

I normally like to mix two completely different ideas—like Alien meets X-ray and Geisha hair, Fish scale meets ‘80s style, or Chinese Opera idea meets flowers. It clicks with Rankin first and he always gets what I’m talking about straight away.

B: Some artists have a certain worldview on beauty and makeup that they take into their makeup—what’s yours?

I would like to see what is going to happen after this book has been out now. I am a fashion makeup artist and would like to be successful in the field, having a big show in Paris, working on campaigns, big editorials.  I still like traveling so it would be great to visit places I haven't been yet.

I think this book will be like bible to young creative people, hopefully not only in the makeup area. Everyone thinks any ideas have already been done and nothing is new but here, you can still find something you have never seen in this book, and I hope that excites and encourages young creators. 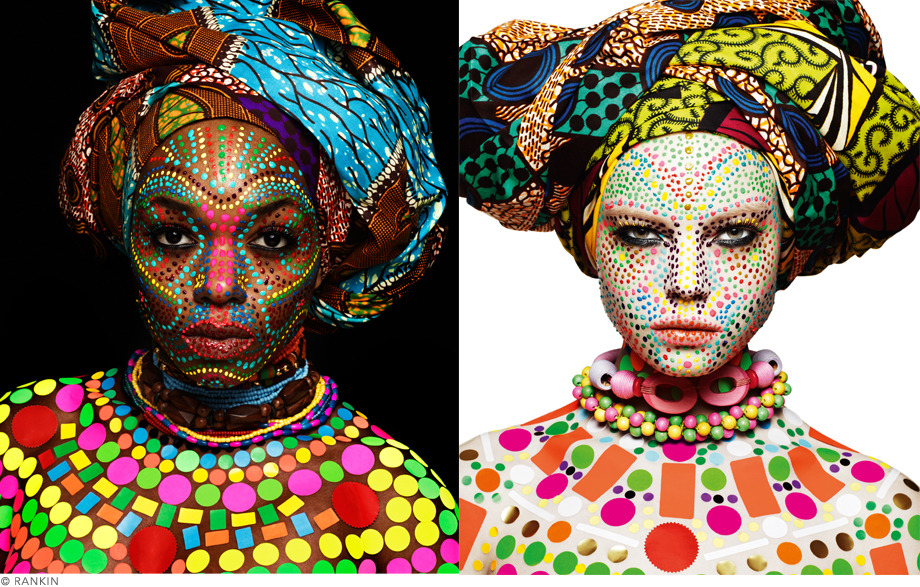 B: What advice can you give to those hungry artists looking to pursue a similar path as you?

I think the quickest way is to find an artist you love and become their assistant. Work for them for a few years and learn their technique, and also how they deal with situations on shoots. You should work hard to develop and find your own identity, and just enjoy and believe what you are doing. It's fun. 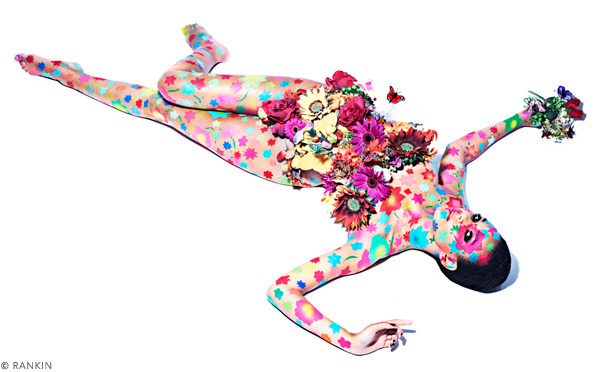 AYAMI NISHIMURA by Rankin, © Rankin, is distributed in the UK by Turnaround, priced £40, www.turnaround.-uk.com, and available online at www.amazon.com.