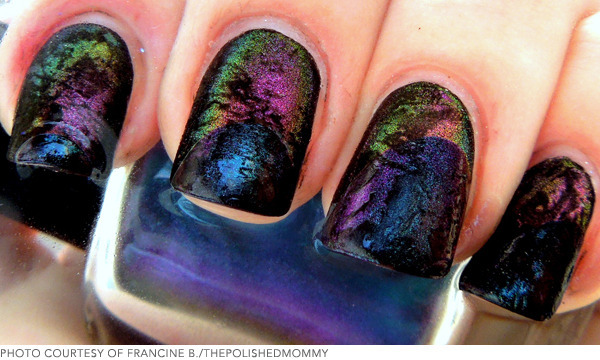 I scan the latest and greatest looks from the Beautylish collective daily, and while I'm always impressed, I recently came across a nail design that stopped me in my eye-gazing tracks. A manicure gone magical. Light-reflective, prismatic, multidimensional, and utterly captivating. Was it duo-chrome interference? Light reflection? Fourth dimensional digits? The unclassifiable tips belong to nail blogger extraordinaire and Beautylish member Francine B., whose experimental techniques have become fan favorites on the site. In line with her innovative yet unorthodox techniques, I soon discovered she used a pigment often applied as car paint to achieve the look.

With the right paycheck, gas-guzzlers small and large can have just about any look in the book painted onto their hoods. It’s often that the technology invested in automotive pigments sets the trend for other applications. In this case, Francine showcased Chromaflair, a pigment made of 20 micron-thick particles coated in magnesium fluoride, which reflects and refracts light from different angles much like a glassy beetle’s wing.

Francine stealthily managed to get her hands on the pigment online (the legality in all of this is fuzzy, but all in the name of nail art?), then mixed it with a suspension base and layered the color, dubbed “The Dark Side of the Rainbow,” over black polish. Her photos—especially the underwater shots—do justice, showing just how multifaceted a nail color can get. While Chromaflair manufacturers JDSU declined to comment on the cosmetic applications of the pigment (used strictly for paints, coatings, plastics, textiles, and packaging at the moment), we can’t deny that maybe Francine has uncovered a potentially revolutionary application for the nail industry. But of course, curious as ever, we wanted to know more. Francine was kind enough to answer a few more burning questions on her custom-car paint polish below.

B: Your nails look amazing. Chromaflair isn’t readily sold in pigment form—how did you obtain it?

I swapped for a tiny amount of Chromaflair pigment. The redditor I swapped with has a boyfriend that works in a chemistry lab and he was running tests on Chromaflair and she was able to get a small sample of what he was testing.

B: What’s the recipe for this color?

I mixed maybe an 1/8 of a teaspoon (or less) of Chromaflair pigment with suspension base. Unlike regular clear base, suspension base is very thick so it keeps the pigments suspended rather than having them sink to the bottom of the bottle. I used two coats of it over black polish.

B: Why shoot underwater?

I've seen other bloggers use underwater pics to more accurately show difficult-to-photograph colors but never put much thought into it until I saw this post by the amazing blogger at nailXchange. I figured I'd give it a try but I never imagined I would capture the completely gorgeous pictures I did. When I was reviewing my pictures I was blown away by the rainbows and color shifts. The underwater pictures impressed me so much I now take underwater pics for all my manicures in hopes of capturing another stunning shot, however not every polish gives me that shot.

B: How did you decide on the “The Dark Side of the Rainbow” moniker?

When I was looking at the pictures all I could think was "Look at that rainbow!" and since I layered it over black, The Dark Side of the Rainbow just seemed to describe it perfectly.

B: Do you see yourself or indie nail companies creating more lacquers with the Chromaflair pigment?

I would love to create a collection using Chromaflair, unfortunately I've learned that Chromaflair is used in counterfeiting so it's not sold to the public. The government is also doing a crackdown on the sale of Spectraflair [a similar, light-diffractive pigment]. It will no longer be available in powder form, so the only way for someone to buy it is already mixed with base. I see this being a huge problem for indie polish makers who mix it with other pigments to create different colored holographic polishes. 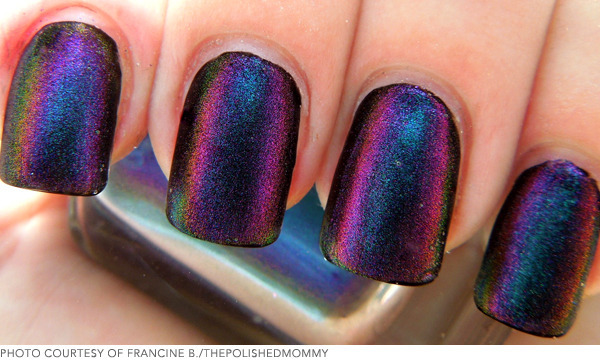