I have yet to use this as an eyeshadow base, but I have been using this as an eyeliner so far. I absolutely love the way it works! You can use around any brush with it - I use an angled brush, and it's super easy to create a quick line on the lids. Creating a winged cat eye is super easy with this product. It's not too liquidy, nor too dry. Just make sure you ensure you close the cap quickly after you use it. I wouldn't want to risk drying this up. I remember the second day I had this, I got scared that it dried a little. That's only the surface of the eyeliner, but just move it arounda bit and it's great. I love it so much that I suggested it to my friends and cousins. :)

Only worked for a while! :\

To be honest, I got this in my April Glambag. I loved it so much when I first started using it - it instantly "requenched" my lips and made them soft and smooth. It was my go-to lip moisturizer for a while, but its effect gradually faded. Now I'm back to chapped lips even though I've been applying this quite liberally. Still, I enjoyed it while the effect lasted

This lip gloss also has a sheer pink color to it. It's not very visible on darkish lips like mine, but would probably give a nice shimmer to lighter colored lips. :)

Great but not the best either!

This purple color is so lovely! I wear it once in a while to give a pop of color to my normal makeup. The eyeliner is really smooth to apply, but I have to run back and forth a couple of times to have true color pay-off. It's also pretty blendable, which is good when I want to smudge it out. However, I also don't like the fact that it's blendable in a different aspect- that it always smudges when I don't want it to. Maybe that's just my problem, but it doesn't stay on all day. Still, it's a great eyeliner and I would like to repurchase another 24/7 glide on eyeliner in perversion or a different color.

My mother used to get this when I was younger and I always wanted to use it. When I took it from her one day, she never got it back. I absolutely love this scrub and always repurchase it. I use it every other day if you're wondering - I don't really have sensitive skin, so it's fine by me. You can really feel it exfoliate your skin as it removes dead skin cells and gives your face a glowing sensation. I love how soft it leaves your skin afterwards too. :) 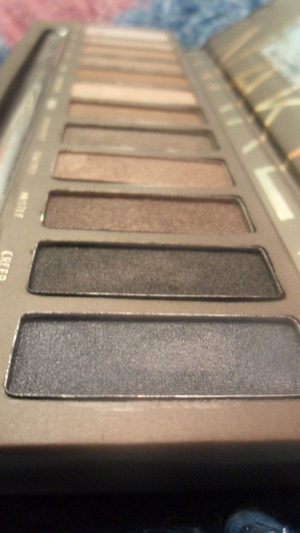 When I found the package in the mail box, I ran inside the house and immediately opened it. Next thing you know, I’m swatching all the colors on my hand - they’re all so beautiful! For my review, I’ll start with appearance first, because that is an important aspect for the sellers. Buyers will likely get attracted to something more if it’s pretty.

So the NAKED Palette gives out a really sophisticated, chic aura because of its design. It’s definitely a design that was very successful. The outside of the palette features a brown, velvety material with golden words that spell out NAKED. On the back, there is more information about the product and the company in tiny golden words. One thing I really like about the palette is the opening mechanism. It’s made like a book, so you can just open it and pull the flap back easily. It also has magnets on both ends, so it snaps shut securely. In the inside, there is a mirror behind the cover, and the shadows themselves.

I’ll first start off with their theme consistency. I really think that their consistent theme throughout the palette helps with the linkage of it. It really makes the palette look even more sophisticated. The rectangular mirror overlaps the word NAKED (in gold) again on the inside. The word is stretched to the area of the binding, also helping with the linkage and design. I like how they kept the color and font consistent throughout the thing (even the names of the shadows underneath are written in gold)- they’re definitely following the rule of thirds. Sorry for all my Yearbook talk - my analyzing is a habit now when it comes to advertisement and design. xD

Also-I forgot to mention this earlier- The size is really nice. It can definitely be taken on vacation easily!

The eyeshadows themselves are soo pretty! The palette also features an area for the karma eyeshadow brush- which has a really sleek and nice appearance as well. The only con I have about the appearance of the palette would be the placement of the eyeshadows. I don’t know if it would be possible, but I’d like them to be glued in the palette better. They seem like they’d fall out any second because their edges are not fully connected to the palette. But overall, I really like the look of this palette! :)

So now on to the actual makeup. I’d like to start of saying that they’re EXTREMELY pigmented. They’re really good eye shadows. You can use them for day, or even night looks! But to make them even better, I would use a primer potion. Unfortunately, I didnt get it along with my purchase, so I’ll just buy a full sized one separately - probably the Urban Decay Primer Potion or the Too Faced Shadow Insurance.

I also forgot to mention my review on the Karma brush. The bristles are EXTREMELY soft. I also love how the tip of the brush is white, so I can see the pigment of my eyeshadow. However, I would rather have the 24/7 eyeliner pencil than this. I have a ton of eyeshadow brushes already and would love to try the eyeliner.

Overall, I really love this product. I don’t have *too* much experience with these shadows, cause I’ve only had these for less than a week, but I still really like ‘em so far. :)

When I first bought this lip balm, I was really excited to use it. My chapped lips were going insane and I heard a lot of good reviews about it. Let me say this - the packaging is adorable. My friends and I thought it was similar to an egg! Anyways, unlike others, I actually liked the waxy feeling. It made me feel like my lips were being fully hydrated. However, although it felt hydrating, I noticed that my lips weren't any better than before - in fact, even more chapped! I also found that it actually brings more emphasis on my chapped lips, as the sheer color outlined the cracks. Additionally, the lip balm didn't say too long on the lips. I had to reapply it every 40 minutes or so between class periods. Not too pleased - will just stick to Burt's Bees lip balm for now.