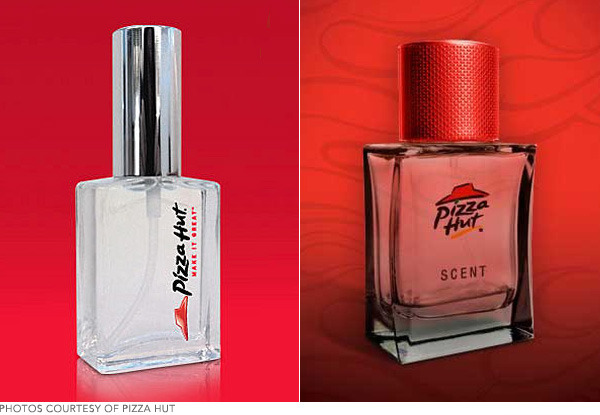 It started as a joke. Pizza Hut Canada posted a mock photo of a Pizza Hut-branded fragrance on their Facebook page (above, right), saying, “Do you love the smell of a box of Pizza Hut pizza being opened? We thought so. If that smell was a perfume, what would it be called?” Silly social media trick, right?

Well, hundreds of ‘likes’ and “I-want-one”-comments later, this goofy product was on track to becoming a reality. Pizza Hut teamed up with Canadian marketing agency Grip Limited to create a limited-edition (reportedly only 100 bottles) release. The bottles (above, left) were only given to 100 lucky fans, but you can find a bottle on Ebay for upwards of $90(!).

The fragrance was conceived as a marketing tool for Pizza Hut fans—a way to engage the social media community and reward users for their participation. “It was about letting consumers know that we do take them seriously,” added Pizza Hut director of marketing Beverly D’Cruz. “And having some fun. That’s what pizza’s all about.”

Grip’s Managing Director of Digital Adam Luck describes the scent as “dough with a little bit of seasoning added.”

They say the way to a man’s heart is through his stomach, and according to some sources, the smell of cheese pizza is a turn-on for men. Who doesn’t drool a little when you first pop that smokin’ hot pizza lid? Still, I don’t see myself spritzing my wrists with this scent anytime soon. What do you think? Would you wear it?

No word yet on whether Pizza Hut has managed to bottle that feeling of shame brought on by scarfing down a large pizza in one sitting.