Our Favorite Nail Colors for Spring 2014 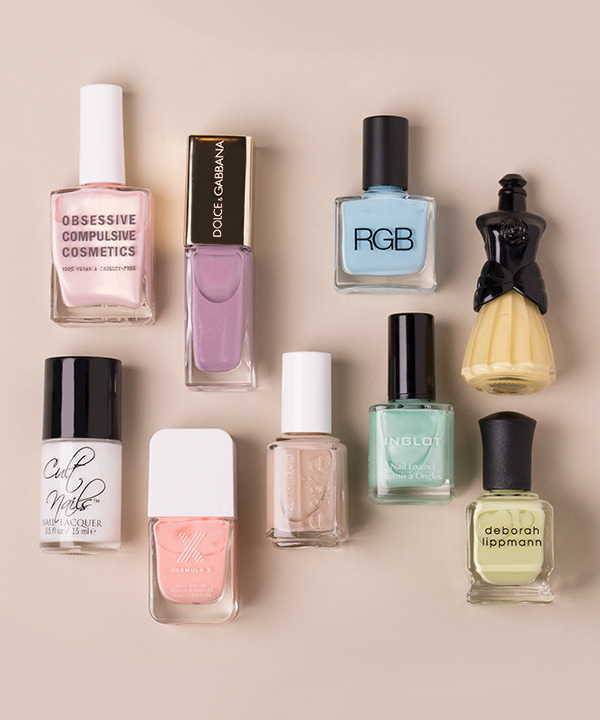 We’ve already accepted the fact that we’ll be stuck with six more weeks of winter. But that doesn’t mean, that, in terms of makeup and nails at least, we’re not already pretending it’s spring. Even though the weather may be crummy, the quickest way to brighten things up is with a cheerful mani. Pastels are the major thing this season, so move your vampy polishes aside to make way for everything from pale blues, pinks, and lilacs to greens, melons, taupes, and whites. With so many beautiful options out there, we’ll be wearing this color family all season long, and into summer!

We like to think of white as the new go-to neutral. Don’t be fooled though, there are tons of finishes, which means there are more variations than you might expect. From super opaque and semi-sheer to shimmer, you’ll find a flattering white no matter your skin tone.

While these won’t necessarily become a lifelong staple in your polish wardrobe, we’re kinda into the somewhere-between-mustard-and green color right now. If you’re completely averse to pure pastels, this is a fun hue to experiment with.

Taupe polishes are a dream come true. They’re pretty much always in style, won’t clash with anything else you’re wearing (makeup, bag, outfit), and when they chip, it’s not so noticeable. What’s not to love?

Coral polishes will always be a favorite during warmer weather, but this season, we’re gravitating toward soft melons. They don’t feel as in your face as full-blown corals, and because there’s such a range (e.g. muted, sheer, opaque), you get to decide how much you want the color to pop.

If you’re tired of mint but don’t want to wear rich, emerald polish anymore, let seafoam green be your new go-to. While it’s similar to mint, there’s more of a blue undertone which gives it a bit of an unexpected twist. A subtle difference, sure, but enough to make for a fresher take on pale green nails.

When blues are really muted, they’re similar to whites in that they become almost neutral. The right pale blue goes with just about anything, yet makes your nails really pop. If full-on white feels too stark, this is your next best thing.

Who hasn’t been a longtime fan of pastel pink polish? There’s something so refreshing and delicate about how the shade looks on nails—perfect for welcoming the warmth!

Polishes with a dusty-grey undertone are tops this season, and these picks get that just right. They’re kinda the perfect compromise between grey and purple, which puts them into neutral territory. Okay to wear to work? We think so!

If you’ve been wanting to try a yellow but haven’t been able to find one that suits you, these may do the trick. The buttery pale quality tones down the showiness of a lemon yellow, but still gives your nails a nice subtle burst of color.