I’ve always wanted long, beautiful nails. The kind that stop other women in their tracks, so that they grab your hands and go “Oh my god are those real?” Nails so long and perfectly polished that they’re a little scary. Nails that scream, “STAND ASIDE, dangerous and mysterious female coming through!”

But after years of trying to grow them only to nibble them down to the quick during scary movies and boring meetings, I accepted my fate: I would never have nails like that. I was destined for a life of short nails that never drew attention to themselves. Until one day when my friend with amazing nails suggested I try acrylics. “You think these are real?” she said, waving her own long, lacquered claws temptingly under my nose. “Go to my salon and ask for ‘almond-shaped’ acrylics. Really long ones. It’s $25 for a full set.”

DUH. Why hadn’t this occurred to me before? I could have fake, perfect nails! So I made an appointment and drove across town to my friend’s (slightly battered) salon. I was seated at a mani station that looked different from all the rest—there were objects that looked like drills hanging over the table, some brushes drying next to them, and a HUGE wall behind the table made up of stacked, clear plastic boxes full of thousands of tiny beads, rhinestones, and vials of glitter.

A man wearing a surgeon-like face mask sat down across the table. “What do you want?” he asked.

“It’s my first time getting acrylics,” I said. “My friend told me to get long almond-nails.”

“Almond nails,” I repeated. “Nails shaped like almonds—like, normal at the bottom but thin and almost pointed at the top.”

“Oh, POINTY NAILS!” my technician said, rolling his eyes. “Why didn’t you tell me pointy nails?”

Now, folks, I was expecting a basic mani to commence. Soak, cuticles, buff, file, and then the fake-nail attachment. But my nail technician surprised me. He reached across the table, turned on the thing that looked like a drill, and grabbed my hand. He lowered the machine to my hand, and I saw what it was—a cylindrical file, rotating quickly and buzzing menacingly. I cringed. He touched it to the full surface of my nail, roughing up the whole nail uniformly. It didn’t hurt—it just felt weird. “We have to give the glue something to stick to,” he said over the buzzing, and I nodded wisely. I had no idea what he was talking about.

He did this to all my nails, and then took out a little plastic box. Inside were incredibly long, semi-translucent fake plastic nails in all different sizes. The tech began matching up different sizes to the tips of my nails, and took out what looked like a little tube of superglue. In just a few seconds, he had dotted the tips of my nails with glue and expertly attached the crazy-long things (we’re talking 2 to 3 inches long). I looked like Freddy Krueger. Gingerly, I tried waving the long, curved claws on my finished hand in the air. This was insane.

“These are, um, these are way too long,” I said, wishing to communicate this before it was too late.
“Don’t worry, don’t worry,” the tech said, bent over his work. “I know what you want.” OH DO YOU? Now I was extremely nervous. He took out a thick silver nail clipper that looked like it operated on the same principles as a guillotine. With a wince-inducing clipping sound, he chopped a good two inches off the ends of each nail. When he finished, they were still too long, and squared off.

There were still many steps to go, during which I kept quiet, betraying my ignorance of acrylic nails: a sandy pink powder mixed with a clear liquid was brushed over both my real nails and fake tips, and the substance quickly hardened into a gel and BOOM: my fake nails were formed. The scary guillotine nail clippers came out again, and each nail was clipped into a terrifyingly sharp point. Then it was back to the buzzy-file machine, which is the thing that ultimately transformed the points into the elusive almond shape I’d been after. I suddenly got it: the man was a damn artist. Even when the nails weren’t yet painted, I could see that they looked exactly how I’d been hoping they would—long, feminine, and slightly intimidating. I nodded, ashamed at how I’d tried to micromanage him.

“What color?” he asked, after sending me to wash all the filed-off grit off my hands. “Shiny black, please.” He painted my nails perfectly, not one mistake, in less than 30 seconds. I was in awe of this man. When I sat at the drying station for a few minutes, a girl looked over and said, “Ooh, scary,” raising her eyebrows. “I like that. Makes you look like a dominatrix or something.” OMG THRILLING. A stranger just said I looked like a dominatrix—these were the nails of my dreams. I tipped the technician lavishly and floated out of the salon, holding my hands out in front of me as I danced to the car. 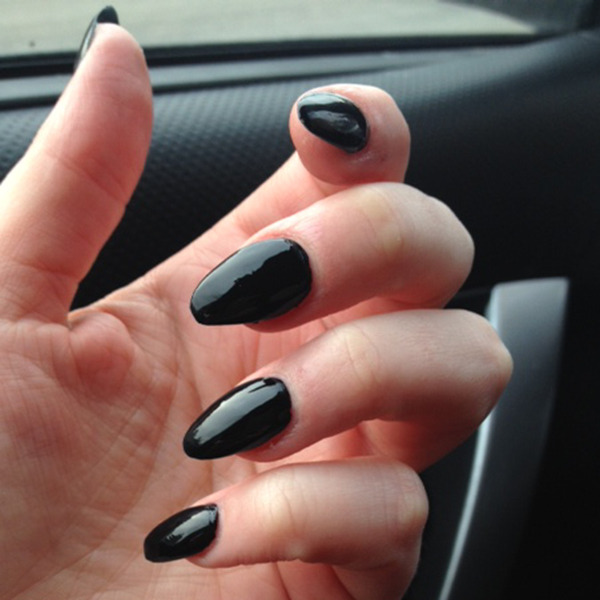 Now here’s something about having long, sharp, and dramatic acrylic nails: You will be getting into a lot of conversations.

A man on the train sharing the same pole as me: “Whoa! Look at them daggers!”

My girlfriend Jen (edging backwards): “You just stay away from me with those things.”

A woman at the bank: “How do you get anything done with those things?”

A toddler sitting in front of me on the bus and eyeing my hands: begins crying noisily 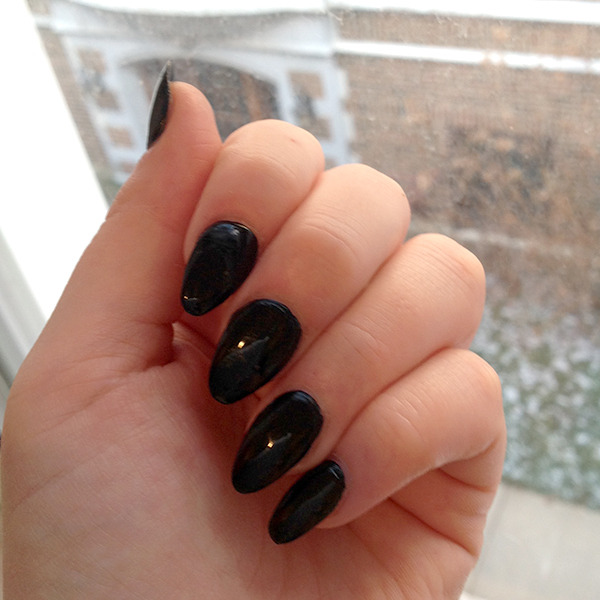 Here’s a list of things I suddenly cannot do, now that my nails are insanely long:

1: Get a knot out of my shoelaces.

2: Put on lotion without getting it all under the backs of my nails.

3: TYPE. I would estimate that it took me 4x as long to write this article as it normally would, since I hit the wrong key every other word.

4: Pick up my bunny and give him a squeeze without causing him deep unease.

5: Take out my contacts.

6: Clench my own fists without stabbing self. 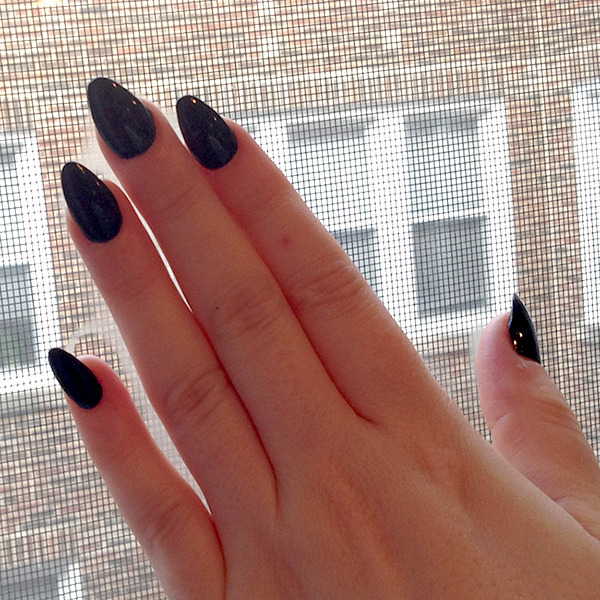 And here’s a list of things I suddenly CAN do:

1: Tap my wonderful fingernails on counters impatiently to great effect

3: Scratch my own back in places I couldn’t previously reach.

It’s what I always wanted, y’all. One thing no one tells you: The night after you get acrylic nails put on, your fingertips begin to ache. And then they begin to straight-up hurt—they feel oddly tender, like you’ve bruised all your nailbeds at once. This feeling lasts for about 24 hours, and I can only assume it’s from having the top layer of your nail buzzed off so the glue sticks to your nails better. The ache goes away, and when it does, your nails feel invincible. So strong! (Even though I suspect my natural nails might be actually weaker when these come off.) The nails look perfect and flawless for about 1.5 weeks, and then you need to get them touched up, or “filled” (meaning have more gel applied to the base, where your new nail grows in) every two weeks or so after that. At my salon, a fill session is $15, so if I got them filled every two weeks, I’d ostensibly have perfect nails for a long time for $30 a month. If you want to get rid of acrylic nails, you have to either 1) get them taken off at a salon, 2) soak them in acetone remover for around half an hour, or 3) grow them out.

It’s so weird to suddenly have strong-feeling nails, and I can’t stop staring at my hands. I’m thinking I might be hooked on acrylics. Love them!