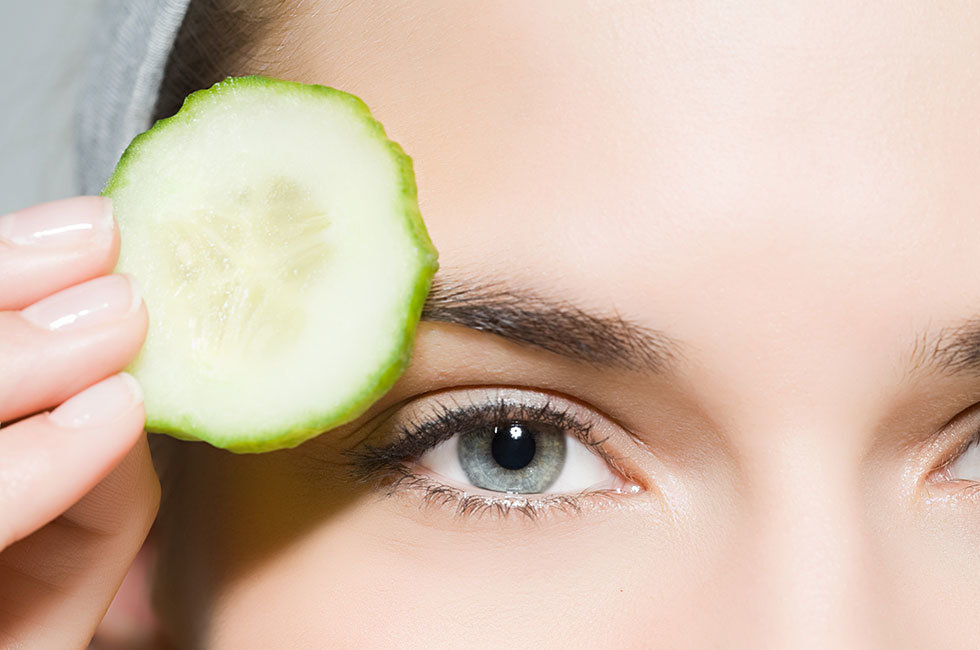 It’s Thursday night, and it’s your friend’s birthday! Everyone’s got to work tomorrow, so it’s just going to be a chill celebration—a couple of people going out for a few drinks.

Four beers, two whiskey sours, three tequila shots, and one loud rendition of TLC’s “Waterfalls” at the karaoke bar later, you wake up in your bed, fully clothed, and hitting snooze over and over again until it finally dawns on you: it’s Friday. And you’re supposed to be at work. You stumble into the bathroom and survey the damage. Oh god. You’re hungover. And you need to look not-hungover. Right now.

This is the (totally hypothetical!) situation I presented to Moani Lee, Global Brand Ambassador for Hourglass Cosmetics. When I asked her if she’s ever had to work on a model at a shoot or show who was very, very hungover, she of course said yes. “I’ve experienced this quite a few times in my ten-year career. But it’s nothing that a few tricks can’t fix,” says Lee. One thing she always advises in these situations: “keep all makeup choices simple.”

While Lee generally loves a good bright lipstick and blush, she recommends using one or the other, not both. Same idea for eye makeup: stay away from heavy eyeliner and eye shadows, as they’ll only enhance the fatigued look of hungover skin. All you really need to do, she says, is “curl your lashes, use a cream-based brightening shadow, and add one or two coats of mascara. With that, you’re good to go.” Here Lee shares five other hangover-hiding skin and makeup tricks for the morning after.

An ounce of prevention...

If you know you’re going to be drinking, plan ahead, before you set one foot out the door. “My best beauty tip is drink lots and lots of water,” says Lee. The simple act of hydrating prior to partying can do wonders for your skin’s appearance the next morning. Lee also notes that coconut water is fantastic for hydrating the body. Aside from getting lots of liquids, washing your face before bed is a must. “Take off all your makeup so that your skin has a moment to breathe and recover as you rest,” says Lee.

I don’t know about you, but my eyes get really puffy the morning after I’ve been out all night. “Eyes are typically the first to show signs of a late night of heavy drinking,” explains Lee. She recommends putting chilled tea bags or cool cucumber slices over each eyelid for 10 to 15 minutes, if you have the time. Chamomile tea bags are best, says Lee, since they contain anti-inflammatory properties that help to reduce swelling and keep delicate skin hydrated. And the phytochemicals in cucumbers can help tighten and de-puff. “Cucumbers are also great for lessening the appearance of dark circles and reducing fine lines and wrinkles,” explains Lee. “And they’re an excellent moisturizer, since they’re over 90 percent water,” she says.

Makeup is secondary to your natural complexion. “Any other color products prove irrelevant if the skin is dehydrated or dull,” says Lee. Her easy post-party trick: fill a gallon-sized zip-lock bag with ice, and use it as a cool compress all over your face for about 10 to 15 minutes. “This helps to improve circulation of fresh, healthy blood to the skin and helps to quickly brighten up a dull complexion,” she says.

Next: Those CIRCLES, aka the dead giveaway that you pretty much drank whatever your friends handed you all night. To deal with bags, Lee always recommends two things. The first is a hydrating primer that’s rich in essential oils and vitamins to help add life and moisture to the complexion and eye area, like Hourglass No. 28 Primer Serum or Kevyn Aucoin The Primed Skin Developer. The second is a skin-like full-coverage concealer with a peach undertone, which helps color-correct green- and blue-tinged shadows. Lee recommends Hourglass Hidden Corrective Concealer in Warm, and our go-to is RCMA Makeup Olive 5 Part Series Palette.

“Eye drops can be used to temporarily lessen redness on skin and blemishes,” says Lee. She also uses hemorrhoid cream in a pinch, as “a surprising insta-fix for under the eyes, because it helps reduce inflammation and swelling,” she says. And for an instant lift, Lee reaches for cream—not powder—highlighter, “because creams create the illusion of hydration,” she explains. And diffusing powders are a morning-after godsend. “They give the skin a soft-focus appearance with a healthy glow,” says Lee. Try Too Faced Candlelight Glow Duo or Hourglass Ambient Lighting Blush, and check out more illuminating powder tips here.

Note: These makeup tips are obviously not an advertisement for heavy drinking, but it’s entirely possible I will feel more confident the next time a Wednesday night going-away party comes calling.