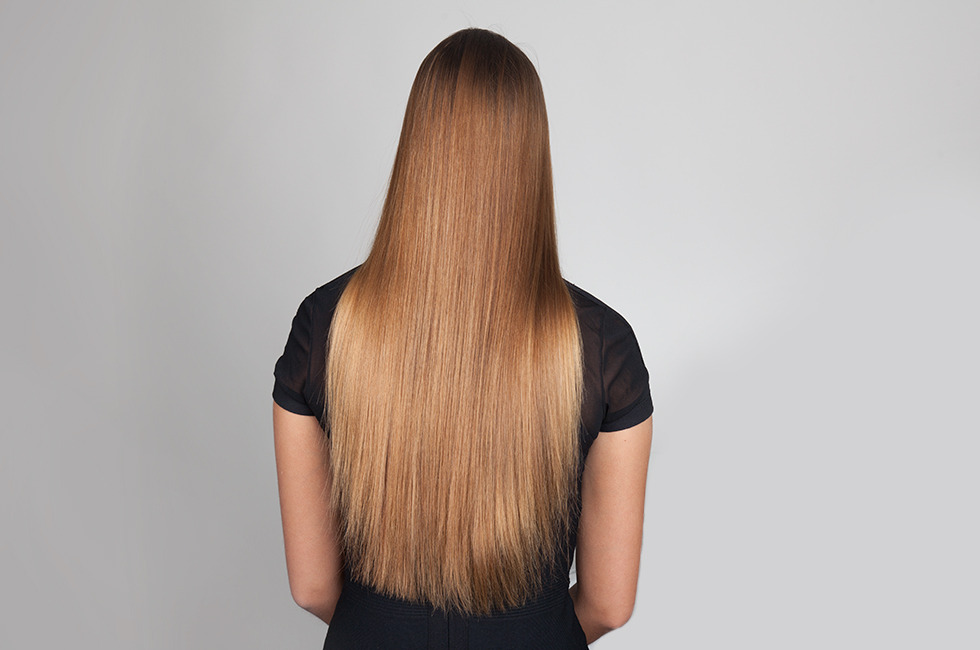 For me, hair color is a scary thing. This is because I’m extremely lazy when it comes to upkeep. The fact that I barely even use my blow dryer is one thing, but I'm even negligent about getting trims on a regular basis. People I know who have beautiful salon highlights and lowlights and everything in between seem to re-up every eight weeks or so. That level of commitment was never something that appealed to me, because my hair is extremely fine and impossible to deal with—so I usually just think, forget it!, and put on more lipstick.

Yet recently, I was craving a hair change, but not a chop. I decided to pay visit to Amanda Hoffhines, who is a master stylist and lead color educator at Luxelab in Santa Monica, California. When I asked Hoffhines about getting color that would grow out really well, like really, really well, she told me it was totally possible! Her plan was to give me something that would look even better over time, the more it grew out. The plan? Subtle, ombré-inspired panels of color that would compliment my natural dark brown. But, Hoffhines explicitly warned, this wasn’t going to be the usual ombré—a look she first saw several years ago. “Now, I’m a little bored with it!” she says. “But there’s a reason people love it. It grows out well, and you don’t have to come back every six to eight weeks.” If you're interested in something similar, here are some tips for communicating with your stylist about what you want.

Three Things to Ask For

1: “Low-maintenance and no more than two shades lighter”
Start by letting your stylist know explicitly that you’re after something that won’t require a ton of follow up. Hoffhines suggests highlights that are no more than two shades lighter than your natural color. “That way, it just sort of blends in and grows out less noticeably,” she explains. For this look, she mixed up a couple of different dark caramel tones using INOA by L’Oreal Professionnel, the first ammonia-free permanent salon color system. The product relies on oils instead of ammonia to open up the cuticle and get color into the hair. “Ammonia can really blast open the cuticle, which means hair can get frizzier. INOA is much more gentle and less damaging,” says Hoffhines. (Bonus: I also noticed that it didn't have that typical hair dye stink; there was barely any scent detectable.)

2: “Panels of color”
Instead of really linear highlights or ombré with a distinct gradient from dark to light, Hoffhines recommended “panels” of highlights, concentrated at the layer of hair just below the outermost layer. “It’s a more modern, updated take on traditional highlights, and it does take inspiration from ombré,” she says. “That way, your natural color is there, with the highlights peeking through. It keeps it from having that really distinct root line, and it will blend in and look great as it grows out.”

3: “Asymmetrical placement”
As Hoffhines painted on these panels of color—she eyeballed the placement instead of having the right and left sides strictly mirror one another. “I’m a fan of asymmetrical color,” she says. “Think about it: when the sun lightens your hair, it doesn’t happen in an orderly fashion!” The effect is really natural-looking, like the sun made it all happen. Since I have full bangs, Hoffhines also added a panel just below the top layer there for a little extra pop.

The Cut and After Care

If you’re getting trimmed up to go with your color, you might consider a few layers. To let my newly colored pieces shine through, Hoffhines added a few more layers, especially toward the front. Then she advised waiting a couple of days before shampooing, and then using a color-preserving shampoo thereafter (see Featured Products for a couple of picks). “When you wash, shampoo and water both can reopen the hair’s cuticle, and that can change the color a bit,” Hoffhines says. But, she explains, you should expect the color to change in the weeks—even the days—after you get it done. “It’s normal,” she says. “That is always going to happen. The sun oxidizes your hair, which will change the shade a little. Even if you’re only getting sun while driving in the car—that’ll do it.”

All the more reason to go with color that you anticipate to change a fade a bit, right? If you’ve experimented with color—subtle or bold—show us in the comments!