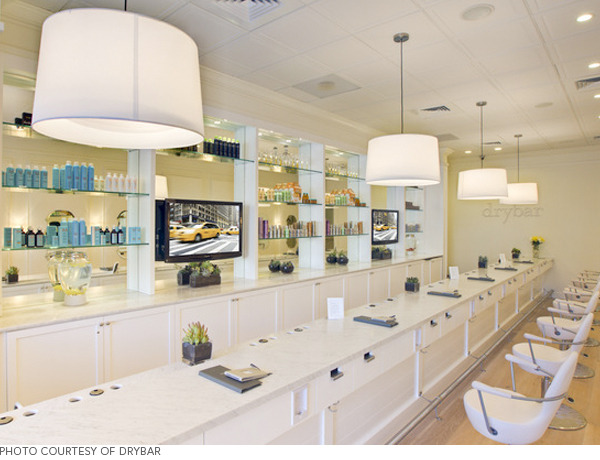 Blow-dry bars are sweeping the nation with a simple concept: Pick one thing and do it really well. In this case, salons are ditching the scissors in lieu of a perfect blowout.

“There are two things we know: Women care about their appearance, and they can’t style their own hair very well,” says Alli Webb, founder of Drybar, one of the most popular blow-dry franchises to launch in the past few years. In a normal salon, stylists are concerned with the cut and color—few really focus on the blowout. It's almost an afterthought, and a lucrative one at that. Drybar, which launched in February 2010, skyrocketed to popularity and is up to nine salons and counting in California, Texas, and New York (the Flatiron location in New York City opens on September 16).

With a variety of unique blowout styles, these salons offer the promise of fabulous hair in a fun, relaxed, and inviting environment. Walk into the San Francisco Drybar and you’ll instantly fall in love with the the clean and feminine decor. After a relaxing shampoo, your stylist lets you select your blowout style from a menu of options. You try “The Cosmo,” a wavy blowout with a few curled pieces. Iced tea in hand, a hectic day melts in your mind as The Devil Wears Prada plays on the flat-screen TV. It’s easy to see why women seek refuge here weekly. You’ll see a socialite off to an event, a soccer mom with little time to spare, and an executive on her way to a meeting. “I couldn’t afford to pay $60 for a blowout, but I could afford a $35 manicure and pedicure” says Alli. “You don’t feel guilty about coming here once a week.”

Express blowouts have also caught the eye of the Hollywood's elite. Celebrity clients such as Emma Roberts, Nicky Hilton, and Rose McGowan are Los Angeles regulars—McGowan loved the concept so much she became an investor. Most recently, Drybar even made a cameo appearance on HBO’s acclaimed show, Entourage. “When I asked Emma why she loves coming here so much, she she said she loves space and the comfort level,” says Alli. “It’s a girlie haven with no cameras in your face.”

What’s next for blow-dry bars? Blow NY, one of the first East-Coast bars to open back in 2005, has had huge success with its eponymous product line and continues to thrive as New York’s on-the-go grooming spot. Drybar is looking to expand to more locations in the U.S., and is beginning to develop its own hair care line. Brands like Phyto have even hopped the blow-dry bandwagon—Phyto is rumored to be opening its own space at Fred Segal in Santa Monica.

Blow-dry bars are popular and trendy at the moment, and it doesn’t seem like they’ll fade from the spotlight anytime soon. “The reason we’ve grown so fast is out of demand,” says Alli. “We opened our first location a year and a half ago, and we’re growing at light speed. It’s incredible. Women want great hair every day without breaking the bank, and we’re here to give it to them.”