Falling Forward: Getting A Head Start On New Trends 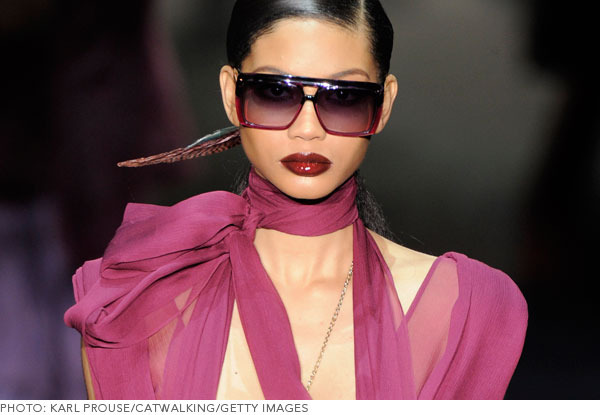 New York Fashion Week is just around the corner, and as I was booking my plane tickets, I thought it would be appropriate to take a look back at the trends that surfaced at the previous round of shows. But as I was flipping through the images of color-blocked clothes (yes, the color-blocking trend survives beyond summer, deepening into gemstone shades for fall), I just couldn’t muster up the same enthusiasm that I had in seasons past. It wasn’t that these pricey threads were any less beautiful than their predecessors or that the hair and makeup didn’t deliver on the theatrics. But now with the internet, access to all of next season’s looks are available to anyone with a wifi connection. And I had been seeing references to fall’s gilded eyelids, bold brows, graphic hair, and jewel-tone fabrics since February—on the street.

Like an overhyped movie that gives you the impression you’ve already seen it before it’s even hit theaters, overexposed fall trends can become passé before summer’s end. So does early access to all the collections just move us forward faster? As a magazine editor, I always felt like I was missing the present, working on holiday gift guides in September and testing summer bronzers in the middle of February. It was as if I could never stop and just enjoy the moment. And it seems like every budding fashionista is on the same fast track, trying on new trends one season early.

I get it—seeing a sneak preview of fall looks in February makes everyone eager to get a head start on what’s new. It’s hard not to covet the latest Gucci confection when you see Chanel Iman gliding by in it. That’s why early adopters started rocking deep burgundy lips (also seen at the Gucci show) as early as March. That berry Gucci gown may not be out yet, but Revlon makes their Super Lustrous Blackberry Lipstick all year long. And who doesn’t want to look like Chanel, regardless of the season?

That’s why beauty trends are especially vulnerable to premature eradication. While the new fall makeup collections of rich gemstone and metallic shades are still gorgeous, they just don’t feel as exciting as they did in years back. So what were the hues that really caught this editor’s eyes? Technicolor tones (such as Nars Single Eye Shadow in Outremer or Guerlain Mirror Mirror Écrin 4 Couleurs Eye Shadow Palette in Les Violets) that work just as well on a warm weather face. But maybe that’s because they’re really meant to recreate the new spring collections’ looks? We’ll see.