Spotlight On: Too Faced's Jerrod Blandino 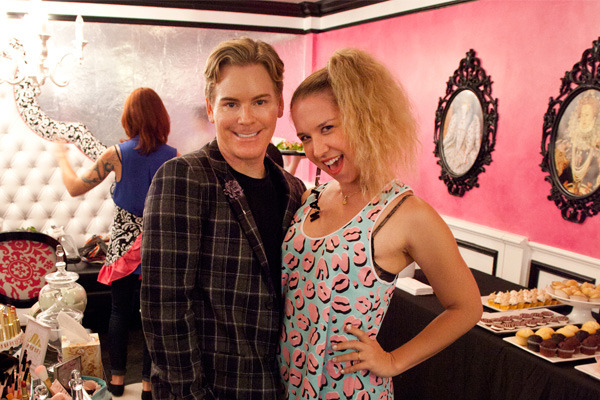 We traveled to the Too Faced "Glam Factory" in Irvine, CA to chat with co-founder Jerrod Blandino about everything from how to start a beauty company to pretty, prom makeup ideas.

B: How did you get your start in beauty?

Actually, I worked in animation before I went into makeup. But there wasn't enough freedom for me in animation. If I had to animate a ball bouncing, by the time it was at the end of the street, the ball was wearing a couture gown! So I went to work at the Estee Lauder makeup counter instead. But it was during a time when there was no creativity in makeup. It was all very boring and brown.

B: The Too Faced brand is anything but boring and brown. How did you go from selling makeup to having your own company?

An executive at Estee Lauder, who now runs MAC, noticed I was working with a lot of celebrities and asked me to consult on their products. I went into the lab and created the first glitter shadow on the market. I took silver shimmer from the lip gloss section of the lab and at first they told me it wasn't possible to press the glitter, but it worked! That black with silver glitter was the first shimmer shadow.

But Madonna and Drew Barrymore were calling and I thought, 'I have to quit my job and do my own thing.' So I started Too faced in 1998. I wanted to create the highest quality product wrapped in a fun, inspiring package. Too Faced Cosmetics is about you looking better than all your friends.

B: Glitter and shimmer, that sounds more like Too Faced. How did you come up with the name?

Too Faced is a term we had at the counter for women who would have meltdowns because we ran out of their favorite apricot lipstick. First they were sweet and nice, but then they were Too Faced!

B: Going back to looking better than all your friends, what are your suggestions for prom makeup?

I think girls should go more bold and metallic for prom. Play up the color and have fun. Break all the rules. Think of Vivienne Westwood and early "Sex and the City" as your inspiration. Like '80s punk meets the Care Bears.

There's a return to blooming, pretty color this year. Pastels and candy sheers are happy and optimistic. I call them Care Bear colors.

B: What's your ultimate prom look?

Slicked hair back in a long fake ponytail, like Madonna in her "Blonde Ambition" era and a thicker or more defined brow is so hot! I also love lots of lashes, a deep dark color smoked in the lash line, and a sheer fuchsia lip like you've been sucking on a lollipop, but with glitter in the center of the lip. You're like the girl who stole the Willy Wonka candy shop! Prom makeup should be feminine but fun. Bold sleek, not bold ugly. Think Lanvin and tulle—almost a tutu. You need to have a sense of humor with makeup. Put safety pins in your dress and rip your stockings. Don't try to be 30, be 17, but the coolest version of 17!