Real Talk: Beautylish Gets Down to Earth With Top Model Nicole Fox

Nicole Fox won America over after she claimed the title of America’s Next Top Model cycle 13 back in 2009. But lately, she’s been winning us over at Beautylish, bringing her laid back attitude (not to mention gorgeous set of ginger locks) to some of our most recent shoots with makeup artist Billy B. We caught a free moment with the inspirational actress, model, and former reality star on set to find out just what’s it’s like to be Nicole Fox. 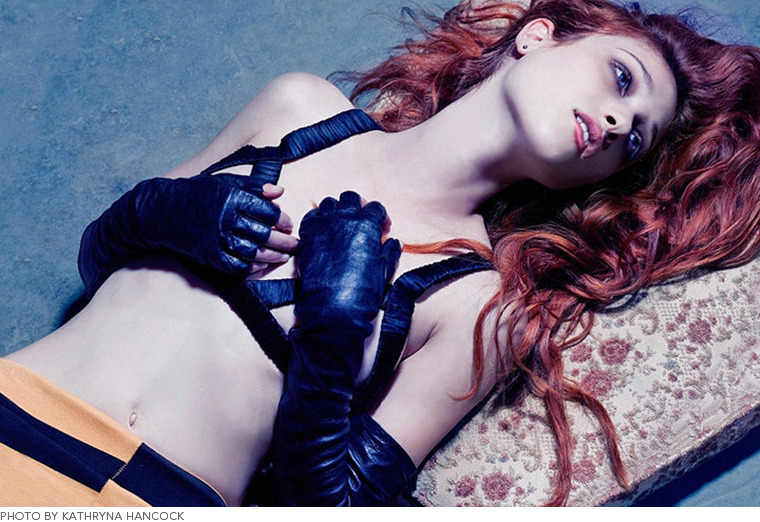 B: ANTM launched you into stardom so fast. Did it feel that way to you?

The process was actually kind of long. When I used to watch Top Model I always thought it was being filmed in real time, but in reality it took well over six months from the time I auditioned for the show in Colorado till the time that it aired. After the season ended, the weirdest thing was that I still really felt like a normal girl, but people just looked at me differently. It felt very weird to have all these people that suddenly wanted to talk to me or get to know me because of the show. I guess it was exciting, but it was mostly confusing. It felt like I was living a double life.

B: Is it still hard to juggle your work life with your personal life?

It’s three years later and I still feel like there are two sets of expectations in my life—
expectations of a normal twenty one year old girl and then the expectations of this girl who was on TV and everyone knew her name. I try and balance out the two but it’s hard sometimes, you know?

B: Was it annoying to be labeled as the shy and awkward girl on the show?

I didn’t like that, but who would? What’s funny is that people will recognize me from the show and say things like ‘Hey, you’re that awkward girl from ANTM!’ or ‘Oh wow, you’re not as weird as I thought you were!’ and I’m just like ‘Gosh, really?’ But back then, I was the youngest girl on the show, I had never been away from my family, and going on a plane to L.A. to be on reality TV for two months? I feel like that could make anyone feel shy! 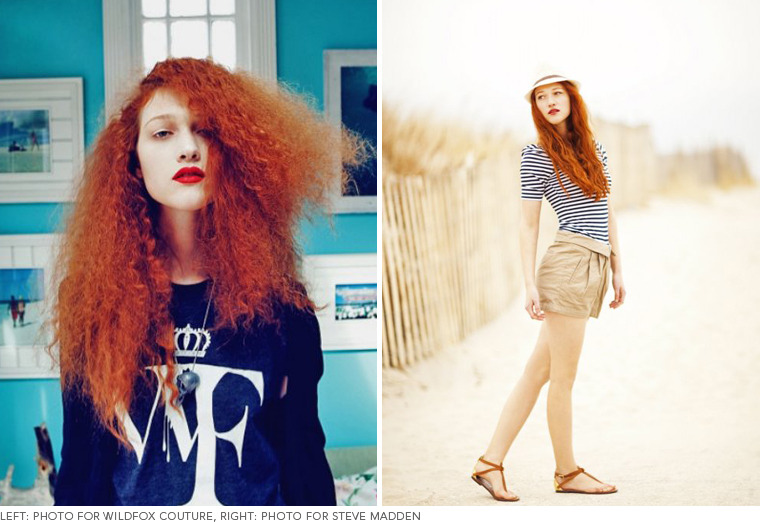 B: Has being in the spotlight pushed you to become more outgoing?

It’s interesting. Before the show I was always a wallflower in school and I was very shy, honestly. Once the show ended, I had to deal with a bunch of publicity and all these new situations. Sometimes putting on an extroverted personality for all those events felt like I was wearing different masks. It didn’t always feel genuine and like me. The truth is, I’ve been in the industry now for three years and many of the models I’ve met are actually very shy because the lifestyle can be very lonely with all the traveling and time spent alone, so a lot of models that I’ve known are actually not what you would think or expect. They’re shy, they’re introverted.

Billy B. is awesome. I’ve known him since I’ve lived in L.A., I think it’s been about two years now. I worked with him twice for Cover Girl and we’ve stayed in contact ever since. We’re actually neighbors out in Hollywood!

B: You must be a fan of his work then?

I feel like I could go out on a limb and say he’s the best makeup artist I’ve worked with. I mean, he’s just amazing! His attention to detail is incredible. I remember when we worked together on a Cover Girl ad for mascara, and he applied mascara to every single one of my lashes. He also really pays attention to the entire concept of the shoot—what I’m wearing, the market, the audience. He gets the big picture.

B: Your journey to modeling stardom is really inspiring. What advice would you give to aspiring models?

Treat it as a profession first and foremost. Second of all, have confidence in yourself. Make sure you know who you are before you go into it because the industry can make you forget pretty easily. It’s definitely not for everyone, that’s for sure. You’re selling yourself and you’re opening yourself up to judgement, and it can be hard to not take any of that stuff personally. Sometimes I wish the industry didn’t have the standards that it does. When I was modeling everyday I saw many unhealthy things, and unhealthy girls, and just shocking casting calls of the kind of girls they wanted–‘waif-like figures, 18 years old and under, at least 5’ 8” and no more than 110 pounds’. It was awful, you know? I wish it were different, but if the public keeps asking to see something different and buys publications featuring healthier models—then, maybe we’ll see a change. 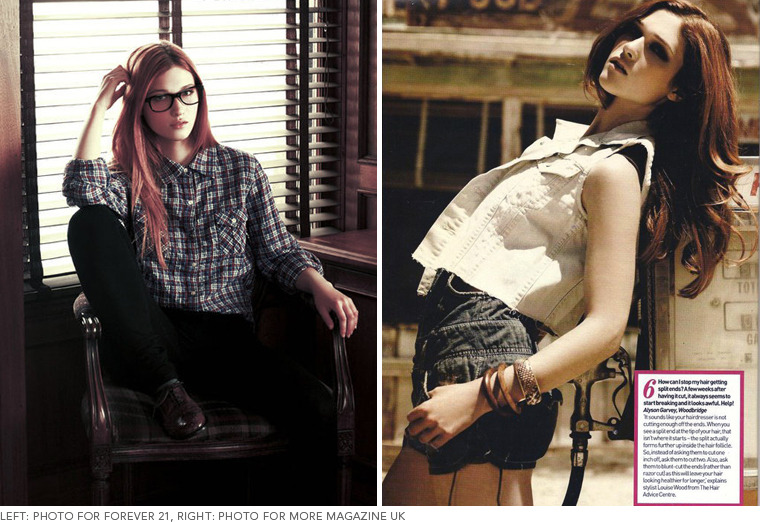 B: We heard you don’t normally wear much makeup in your everyday life. What’s it like for you to have to work in it?

I’ve gotten used to it. I had to learn things like how to spend a really long time between blinking [laughs]. The makeup artist’s used to have to hold my eye open so I couldn’t close it! On occasion I’ve have bad reactions to makeup. The makeup artist will spend hours on one eye and by the end I’m tearing up, and I can’t stop, and they’re horrified! I mean, you think ‘how could you get in trouble for having watery eyes?’ but something like that could get you fired from a shoot. Before I really started modeling I did wear makeup, but now dressing up is just a job. I love looking amazing when I’m on a shoot, but otherwise I just wanna wear flip flops and you know, be messy!

B: What qualities in a makeup artist stand out to you as a model?

I don’t know if I can speak for other models, but in my experience, everyone is always trying to make an impression or get noticed. People will try to be the loudest, or say the most obnoxious thing—and that’s what makes me uncomfortable on set. I appreciate makeup artists who talk to me on a real level. We chat about the shoot and I feel like we’re on the same team. That’s what makes you memorable and that’s what gets you hired. I think the person who wins in the end is the person who will work the hardest, and Billy B. has told me the same. It’s not like Billy just woke up one morning and was this makeup star, you know? He spent years building his career. Just be as professional as possible.

B: What are you working on now?

I’m still modeling when an opportunity presents itself but right now I’m really focused on acting. I finished up three independent films this year and one of them entitled Sprawl just had its premiere in Hollywood. I shot the other two films a couple months ago. One is called No Other Country directed by Brett Leonard which will be released in the upcoming month, and then another film called Redlands that should be in out next month. 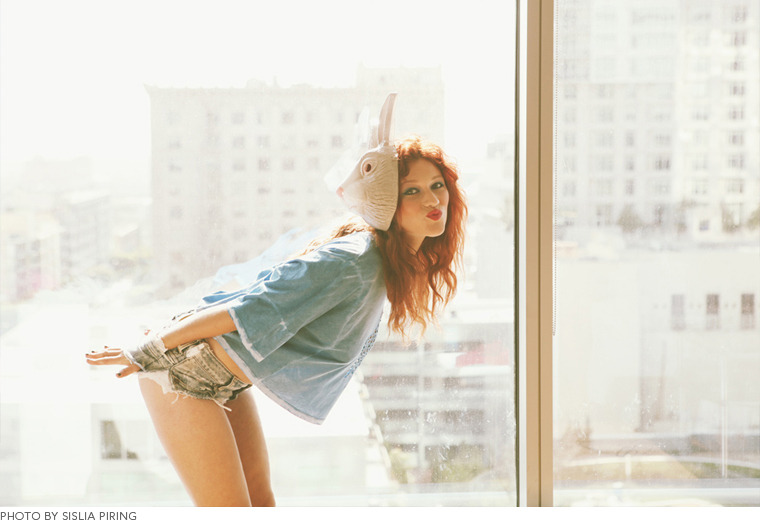