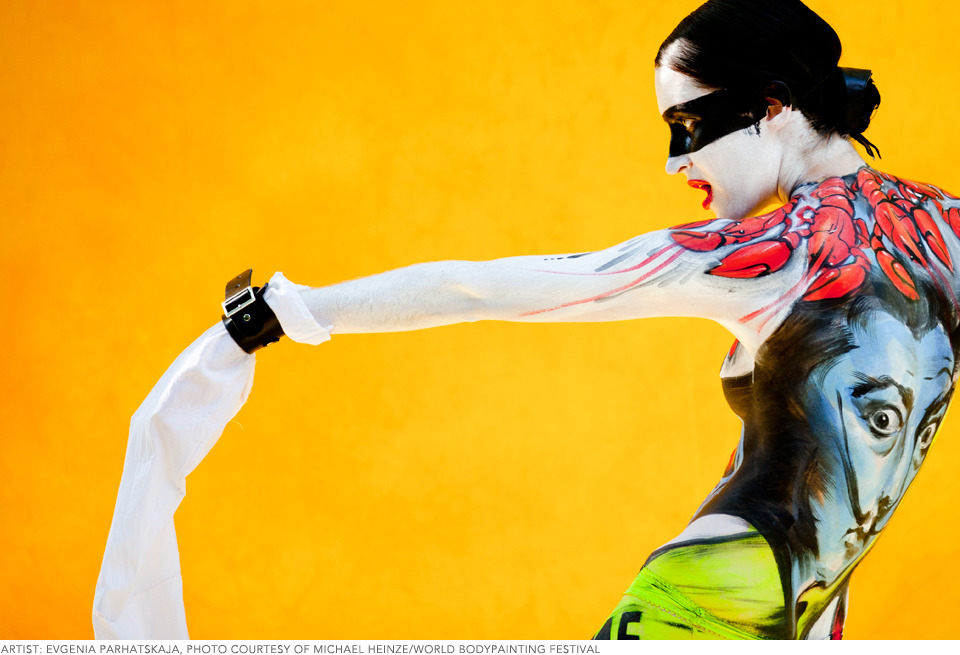 The Austrian town of Pörtschac, set against the stunning Lake Wörthersee, is quite the Bavarian tourist attraction. Transparent turquoise waters, greenery as far as the eye can see, and Eastern European charm make this an ideal summer destination for tourists. Juxtaposing this natural backdrop once a year? A sea of artificially painted nudes.

The World Bodypainting Festival has called Pörtschac its home since 2011, but the international celebration of body art, now in its 15th year and with over 25,000 visitors in attendance, is growing by the minute.

Bodypaint city, as the festival’s Burning Man-esque footprint is referred to, is a flurry of activity come July. Among a list-long program of music performances, fashion shows, world-class academy workshops, and even a “Body Circus” set within a real castle, founder Alex Barendregt has stealthily transformed a small local gathering of artists in 1998 to a world-class epicenter for body painters and their spectators. Over the years, he’s teamed up with the best in makeup, from Berlin-based Kryolan to MAC Cosmetics, delivering a week-long destination full of artistry, innovation, and sometimes scandalous body design.

With the world bodypainting championships as the main attraction, over 200 artists from 40 nations make the journey to compete in the fields of fluoro and UV, airbrush, special effects, face painting, and brush/sponge techniques. Winners are chosen based on technique, application, originality, and composition. The talent is eye-popping, jaw-dropping, and body-shaking.

Just as nails and the face are unique canvases, the the human figure presents a whole other world of artistic and technical challenges to explore. Now relaxed after July's festivities, we caught up with Alex to discuss how his festival has evolved in 15 short years from local gathering to the global authority on bodypainting. 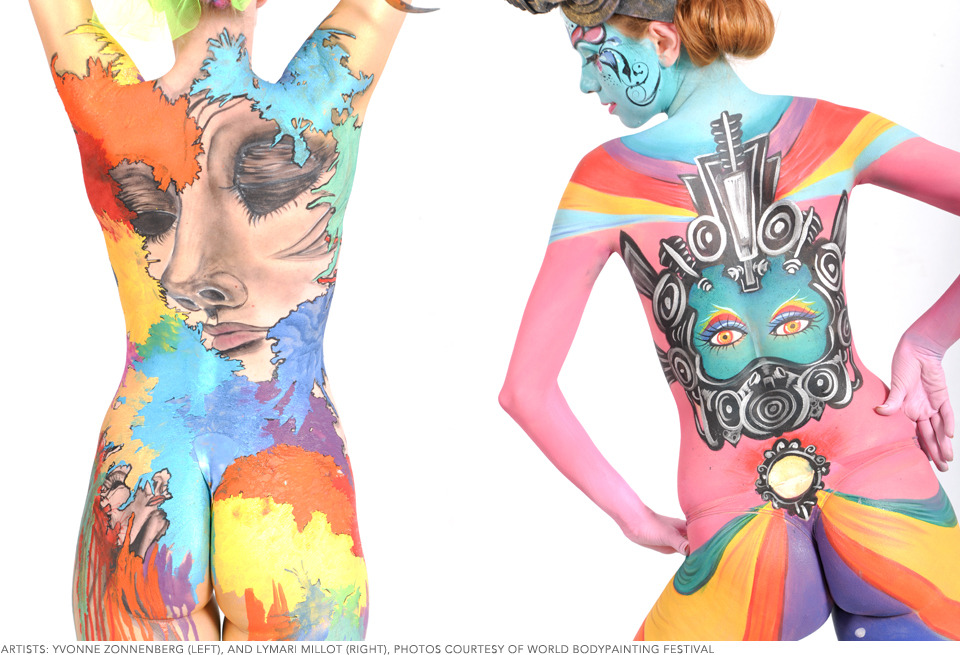 B: You’re not a makeup artist by trade, yet you’ve created the world’s first bodypainting festival...

I studied tourism management in Austria. I like to create an atmosphere for people to have a great time. When I got a job for the local tourism industry, I did some small events throughout the year. Nothing special—events that are happening everywhere. But I was looking for something special, unique, a bit provocative, and something that does not exist.

B: Why choose bodypainting?

A big inspiration of starting the festival was simply some bodypainting photos. A university art teacher showed me these amazing images and I got fascinated by it. After two years, I found the images again and then I got to know the source, the artist, the model behind it—‘70s German model Veruschka von Lehndorff.

B: And it had that profound of an impact?

Her images...the inspiration of creating an artistic world outside of museum walls. Something in nature, something to connect with our environment. It was so special to see how bodypainting can be used with the human body in focus, and to see and have the option to move the artwork however you feel like. It’s changing perspectives, provocation for the very countryside people in our town. 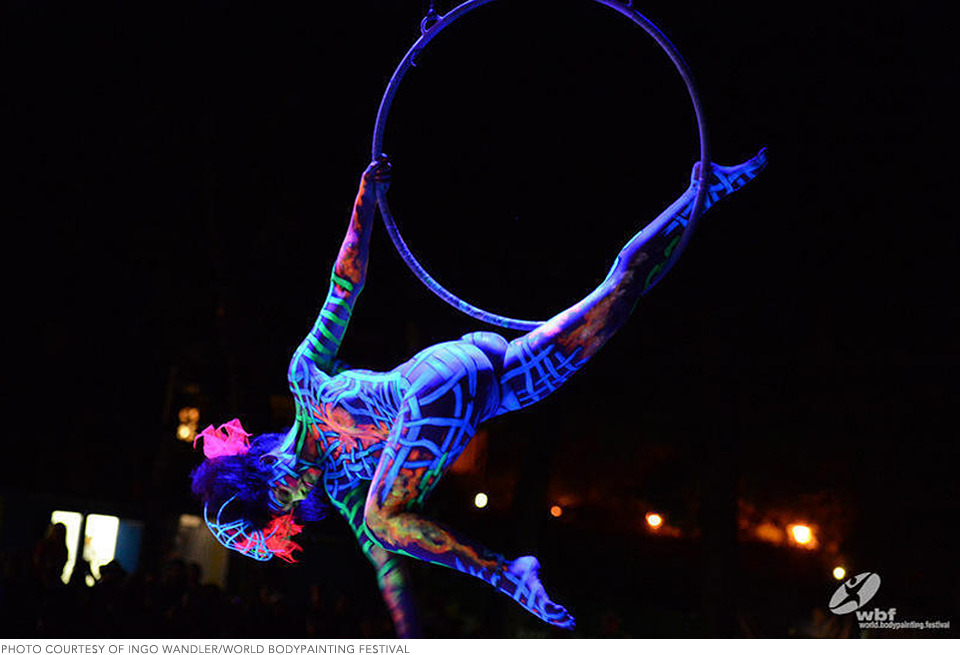 B: Did you have any obstacles when you initially created the event?

The festival was tiny in the first year. I invited eight artists to paint in a park. There was no idea of a competition in the beginning, it was to create a get together for this special interest group. The inspiration for a contest followed the year after. The media pushed the contest concept, but after the idea was put on paper, the artists did too. The internet was not very developed at that time, I couldn't find bodypainting contacts back in 1998, so I registered the first domain and started to build my website.

After the first year, I knew that this event could be something very special, very unique—and every year I was just obsessed by it. I was only 21 years old at the time, and tried to look at other events and see how I could improve my festival—staging, infrastructure, bars, photo areas, press areas, etc. It took a long time, especially because there was not a lot of money, we barely had sponsors, and no ticket sales at all.

15 years later, there is of course a routine, but we add new ideas every year from the feedback we get. I still plan most of it, but I have a great assistant.

B: The festival was held in Seeboden in the past, but in 2011 you relocated to picturesque Pörtschach at Lake Wörthersee. Why the move?

The move was simply caused by local politics. 2010 was a new party with a new mayor in the town hall, and they just didn't like the event. It was too loud, too big, and cost the town hall too much money—they said. Without thinking of the benefits of what income the town had, they tried everything to kill the event. I told them it’s easy for me—I can quit my job and take the event somewhere else. So I did, and put the event in my new company ‘WB Production.’ The search for money to create such huge infrastructure keeps me busy most of the year, and it doesn't get easier, especially in times like now. 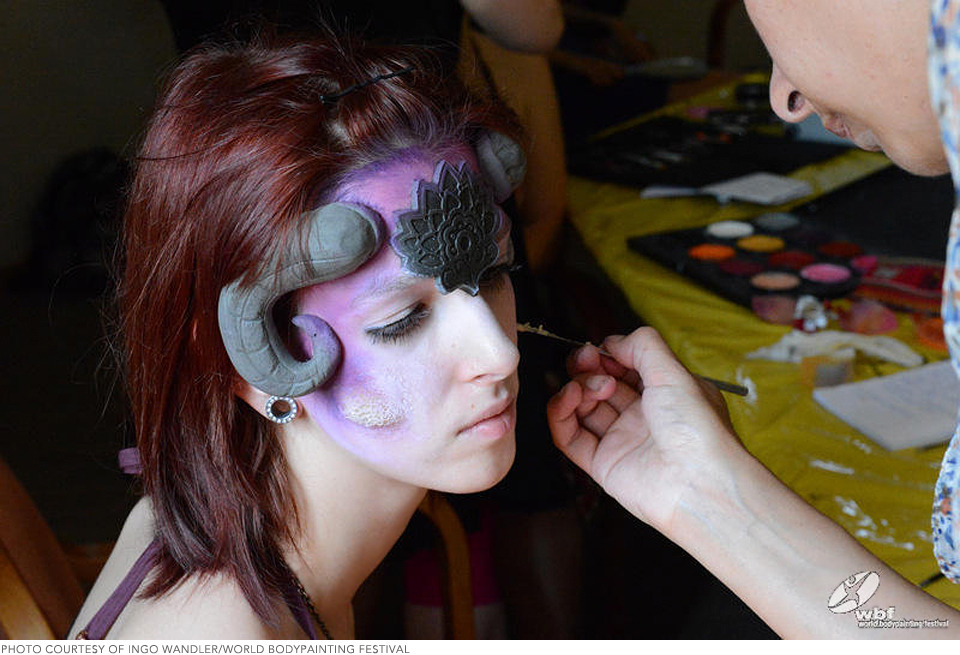 B: The WBF Academy is an amazing opportunity for artists—how did you go about crafting the curriculum for classes and finding artists to teach?

The WBF Academy is a development. We put more and more artists on the program every year. I simply look on the feedback we receive from the year before and I am always happy to add new ideas with the classic workshop program. Light bodypainting, bodypainting and body awareness, model workshops or fashion and decoration, and so on.

Sometimes we have also requests from companies to provide workshops, which we are happy to include. That gives us also the opportunity to lower costs for the participants.

B: I notice WBF places huge emphasis on the interaction of music, dance, and fashion—do you think makeup in general should be celebrated as part of a cohesive performance?

Including performance art and fashion in the festival was a natural step. If visitors should stay and watch the artists all day, they also need some entertainment. Working with big music groups, great fashion designers, or celebrities has given the festival and the bodypainting platform a bigger attention in the media. It was great feedback for the whole industry.

B: 2012's themes were "Inner Fears—Battling the invisible" and "Avant-garde, innovative provocative"—why those?

Very often the themes are chosen with feedback, or when I sit together with some artists and have some drinks. We speak about what could be different from the year before. For example, I chose the 2011 theme ‘Rebirth’ because Pörtschach was a new venue, and the festival almost died the year before. Inner Fears was the follow up this year—my personal fear that the festival should not fail. But also, the fear and pressure that you get as an organizer, battling the critics, the feedback, and of course success after a very difficult year. Avant-garde was a compatible theme within the fashion aspect of the festival, but also for its artistic point. It’s a topic that pushes expression of an artist’s idea. Johannes Stötter from Italy, this year’s winner in the brush/sponge category, pushed the provocation pretty far. 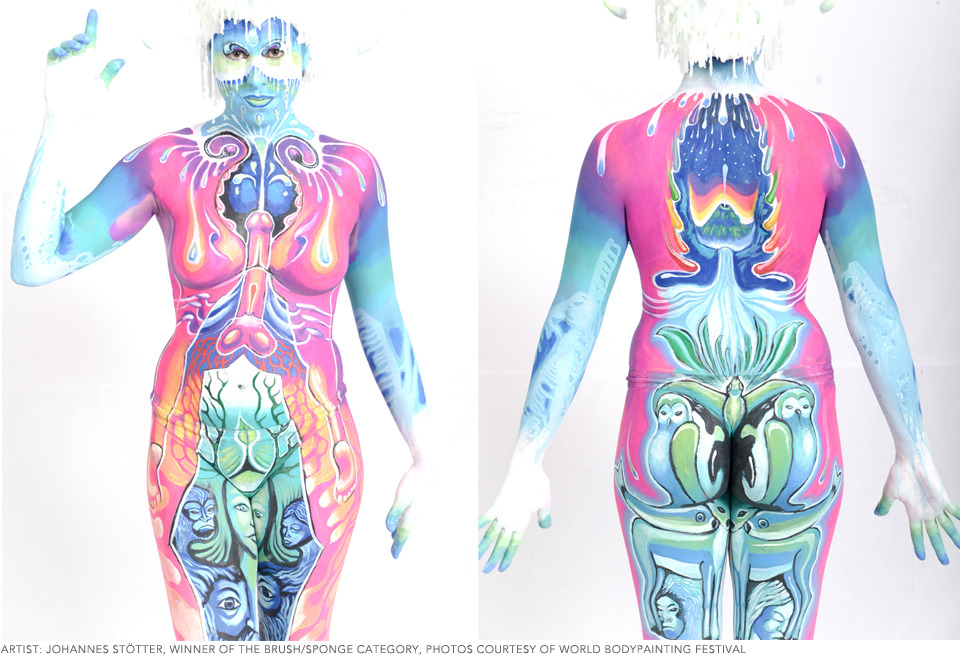 B: You have huge sponsors now like Kryolan, Snazaroo, and MAC. What role do they play in the success of the World Bodypainting Festival?

They’ve been supports for quite a long time already, and I am very happy to fulfill the expectations of our partners. The WBF is the world's most important event of the industry, and the partners see and feel it. Sponsors supply budget for the marketing but also products for the prices and participants. MAC Pro gives out 240 goodie bags for every participant!

B: Did you ever feel it would grow to be this big 15 years ago?

I am surprised how big it got and the effect it’s had on the bodypainting industry. In 1998, I was working with eight artists—no competition, no stage, no nothing. I was the only one there putting some podiums together, playing DJ, and selling drinks. If there were 100 visitors, it was a lot. Now we have 150 setting the festival up alone. This year we had almost 26,000 visitors and 240 competing artists. We have many news and ideas. Details are coming up over the next months—participants and visitors will get many more surprises. 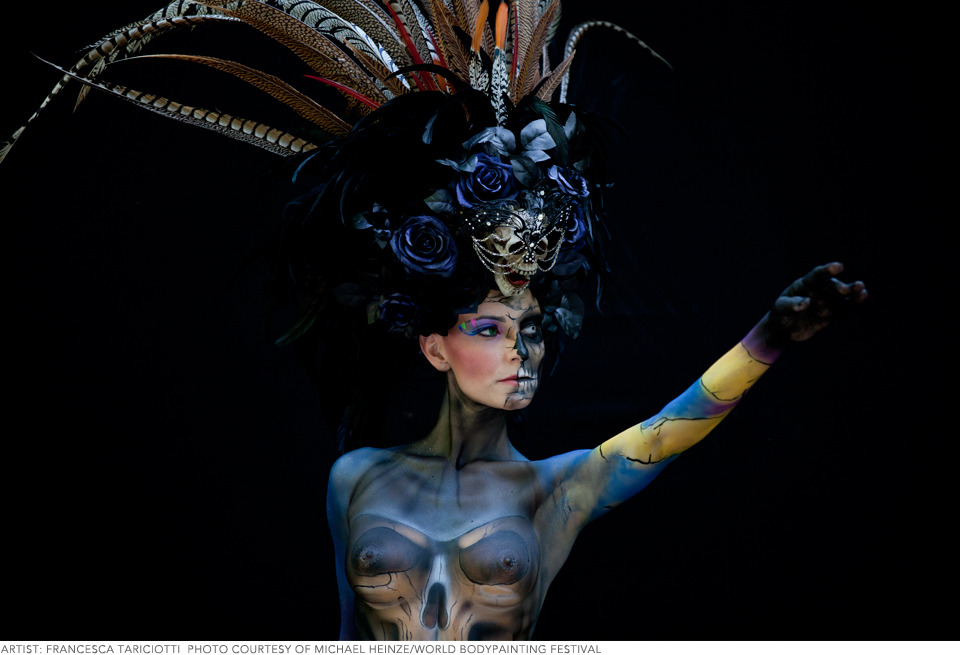 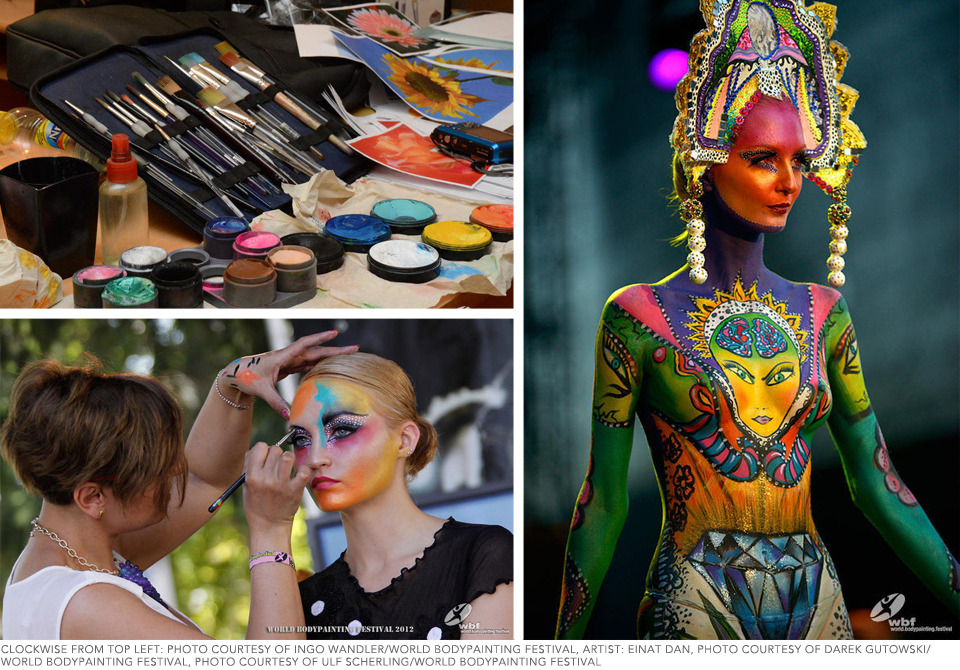 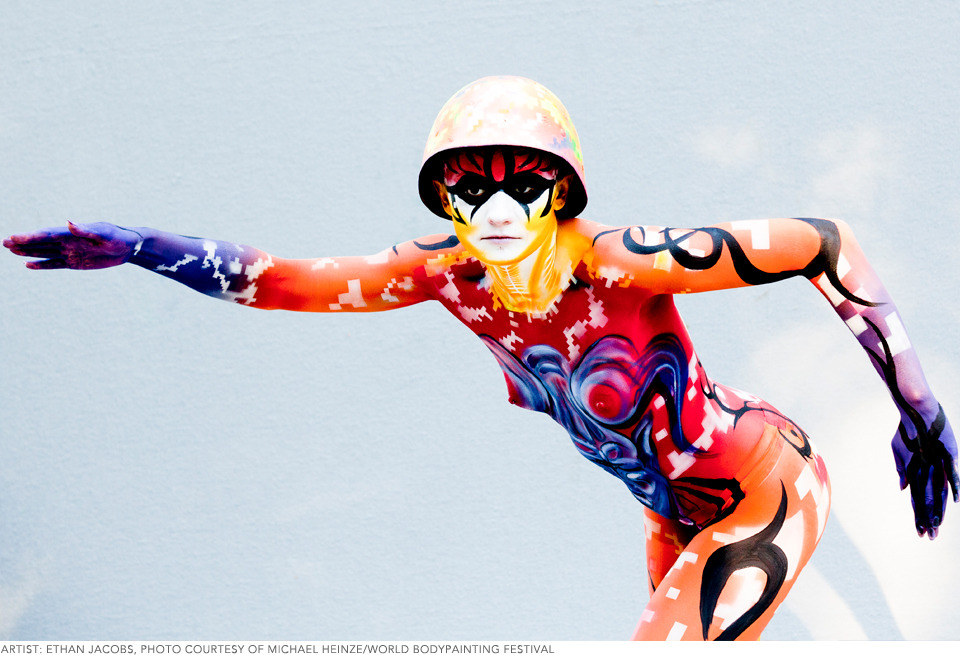 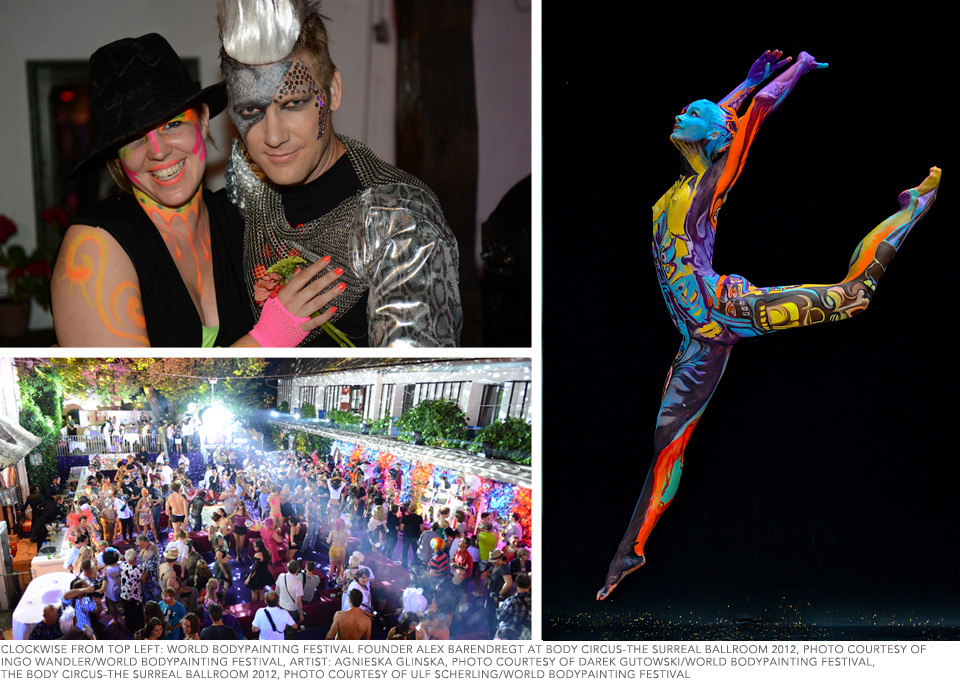 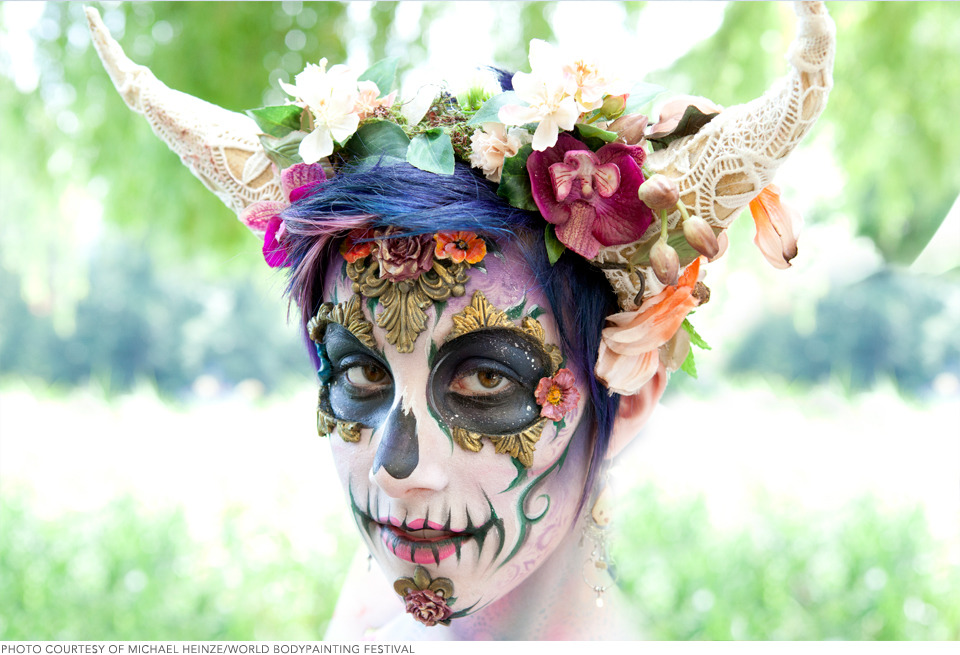 For more info on the World Bodypainting Festival, check out bodypainting-festival.com/en!