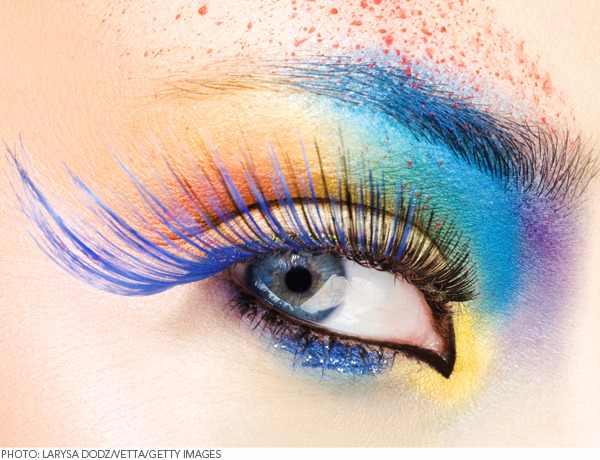 It’s not hard to find rainbow beauty inspiration on Beautylish. What’s not to love about ROY G. BIV? From religious, social, scientific, or just plain creative perspectives, the striped, happy hues resonate for a lot of different reasons. But with June’s month of pride shining bright and San Francisco’s own parade ready to march this Sunday, we started thinking about rainbow color culture in the LGBT community. Why is the rainbow flag the symbol of gay pride, and what makes this palette so distinct from the rest? Turns out, it all began right here in the city by the bay.

The rainbow flag, sometimes called the freedom flag, has officially been associated with the LGBT community since 1978. Designed by San Francisco-based artist Gilbert Baker, the flag was originally a response to a call for a community symbol. Baker dyed and sewed the first flag himself—comprised of eight multicolored stripes—and first flew it in the 1978 Gay Freedom Day Parade. Pink symbolized sex, red for life, orange for healing, yellow for sun, green for nature, turquoise for art, indigo for harmony, and violet for spirit. However, hot pink wasn’t easily available to mass-produce, so the flag dropped to seven hues. Later, Baker removed turquoise to keep an even number and changed indigo’s stripe to royal blue, and the six-hued flag flies as the symbol we know and love today. Color order matters, and the flag always starts from red to violet. So whether you’re celebrating pride this month or just simply adore color, recall the chromatic history of the banner when working on your next rainbow eye liner or manicure designs.