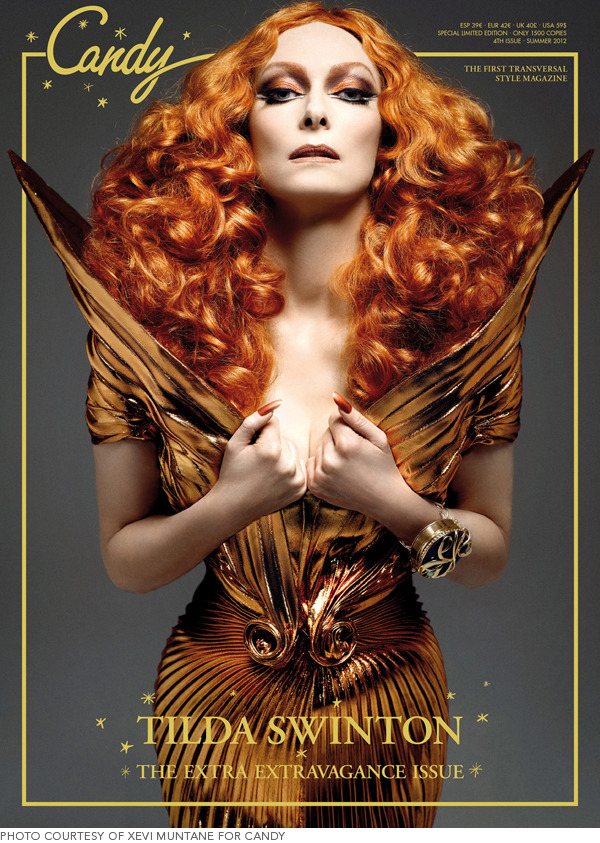 “Woah! It’s Tilda Swinton?!” Those were the words heard at Beautylish when we spotted the latest cover of Candy, a transversal magazine. The normally pale, ice-maiden-esque actress who is known for her incredible acting skills in films such as Narnia and We Need to Talk About Kevin, looks anything but herself on the cover of Candy. And while we were shocked, we loved how completely un-Tilda she looked. Complete with auburn wig, dramatic golden cat eyes and long, stiletto shaped nails, the actress was almost unrecognisable, a feat that the magazine, which “celebrates transvestism, transexuality, crossdressing and androgyny in all their glory,” often bestows upon its cover stars. In the following pages, the campaign—titled ‘The Transformer’—further proves both Tilda’s ability to take on any persona, and the awesome transformative powers of makeup. Shot by photographer Xevi Muntane and styled by Candy’s creative director Jerry Stafford, the incredible images are testament to fashion and beauty’s powerful metamorphosis—whether it be for a day, a moment, or the rest of your life.