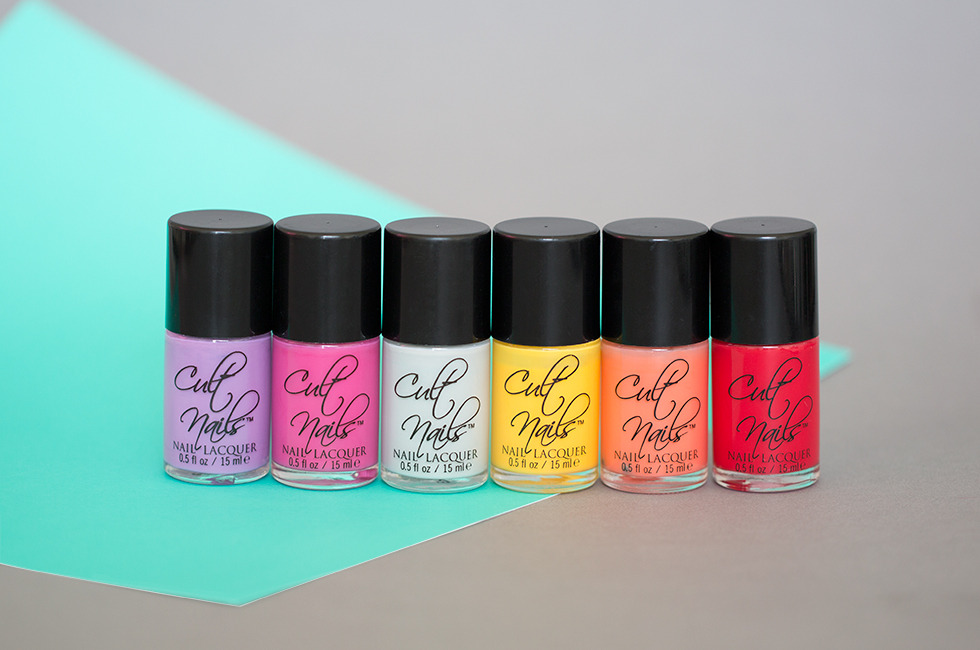 A small, satellite island off the coast of Cocoa Beach, Florida is perhaps the last place you’d expect to produce one of the most exciting burgeoning beauty empires of the moment. But that’s where Maria Morrison, founder of Cult Nails, makes both her homebase and her home. And aside from an outside lab that develop all of the polish, the operation remains remarkably small: just two people, plus an assistant who Morrison calls in “when we need her.” Still, Cult Nails is thriving, with sales doubling every month since launching two years ago. “I keep wondering—when is it gonna end?” says Morrison, with a laugh, of her incredible success.

For lack of a better term, Cult has a cult following, counting everyone from professional manicurists to popular nail art bloggers among its loyal fan base. And beyond the ever-evolving selection of inspiring and distinctive colors you can’t quite find anywhere else, its Morrison’s way of working that gets people really hooked. Through her blog, she actually gets her readers and customers involved in the color- and product-development process, which we learned all about during our recent chat with Morrison. Read on to hear about Cult’s humble beginnings, and shop the line—available now at Beautylish Boutiques!

How did Cult Nails come to be?

About 5 years ago, I started writing a business plan to open a salon when my husband was sent to Greenland for a year. He’s in the Air Force, and I had always figured that’s what I was going to do that whenever we settled down, whenever he retired. But at the time, I was working as a human resources executive and hating every minute of it. So I just started planning, and while doing research online, I started to come across so many nail blogs. It was a whole new world for me, and I just thought What is this?! So I started a blog to see if I might be able to develop a following. And the blog took off pretty fast.

I’d mix my own colors and post them, and people just really liked and responded to what I was doing. I kept having literal dreams that I’d started a polish line. And eventually my husband said—dude, you should go for it!

And so you just started a line? It can’t be that simple!

It wasn’t easy. This industry is very tight-knit. It took awhile to find labs that could develop product, and then it took even longer to get them to work with us, because we didn’t have a line established or brand established. The labs told us nail polish lines were usually started by people who’d been in the beauty industry for years—and that at least 50 to 100 new brands launched every year. I remember someone saying “Of those, 10 per year might survive. And two years from there, one of those 10 might be doing well.” We didn’t let that discourage us. The update is that our lab has since told us that we’re doing a lot better than many companies that are approaching the 10-year mark (Cult has been in business since 2011).

How was your approach to developing product with the labs different from the usual?

The lab we settled on agreed to work with us on developing colors in small batches, which is something they hadn’t done before. Usually, in terms of creating colors, the labs put out the forecast. They say, “Here are the trends for the season. Here’s what we made. What do you want to buy?” And I thought, I don’t want to buy what everyone else is buying. I want to create original stuff—the stuff I want to make. And because we talk with bloggers as part of our product development, we can actually offer intel from our customers to our lab. We go back to them and say “Here’s what bloggers want, here are the colors nail artists want.”So we help [the labs] out.  It’s a give and take. 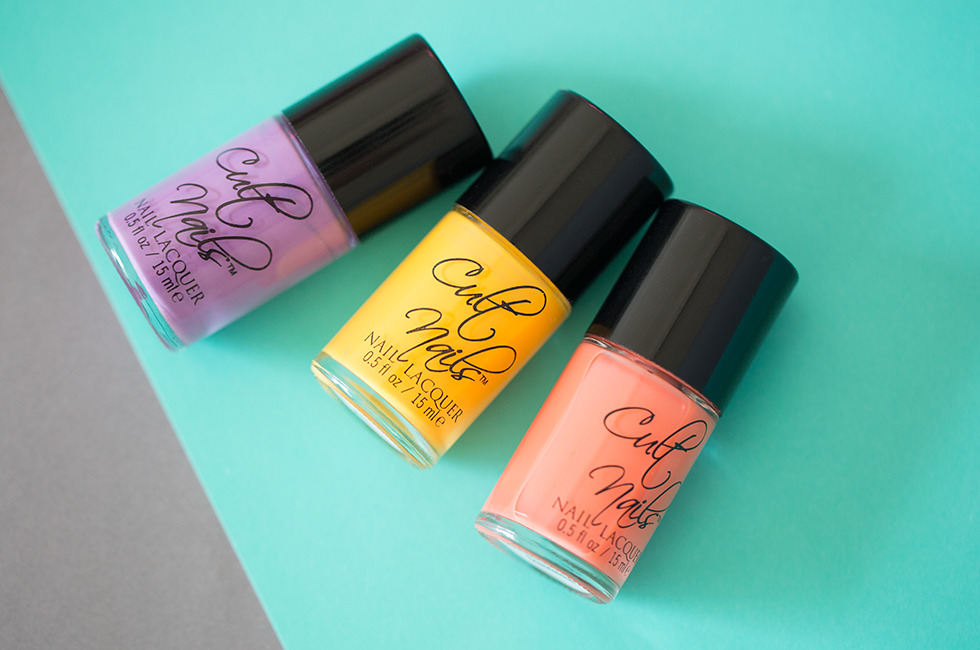 You said you wanted to start a salon. But were you always a nails person?

I’ve always been a nails person. When I graduated high school, I wanted to learn to do nails. My mom said, “No, you’re going to college.” In her mind, becoming a nail tech was something that people who aren’t able to go to college do. I went to school, and eventually started my career in HR, but life sort of took over first. I met husband when I was 18. When we were 20, he joined military. That was 18 years ago. Another reason I had to put everything on hold for his military career was because I got pregnant on the wedding night! I still went to school, even though it took me awhile to finish. But the agreement he and I had was that I’d follow him for the first 20 years, and then once he retired, it’d be all me. And despite my mom and everything else, I just kept thinking, I am going to do nails.

What was missing from nail polishes you were using? What didn’t you like about them? Were you seeing a lack of inspiring colors?

When I was doing the blog, I was getting a ton of nail polish sent to me to review. And it was the same old, same old over and over. Say I got blue glitter from companies B, C, and D—none of them was any different from the next. It was starting to get sort of boring. And because I was bored, I started mixing colors and making my own shades. And when I started showing those on my blog people really responded. Everything grew from there.

What considerations aside from color did you have in developing a line of polish?

I wasn’t too concerned about formulation initially, except for one key thing—I wanted it to last. I like to do my nails on Sunday night, and Sunday night only. So I wanted my polish to last and look really good for the full week, with no chips. Almost the type of finish and duration you get from an acrylic or gel mani—that’s what I was after.

As we started researching and working with the lab, we learned a lot. That’s where the idea to do a 3-Free line came from. And because my daughter and I are both vegetarians, it made sense to do vegan-friendly polish. Before that, I’d assumed all nail polish was vegan! There was so much to learn, and so much trial and error. I have really bad seasonal allergies, and we discovered that camphor—a common ingredient that helps polish look better in the bottle for a longer period of time—is made from tree bark, and can really irritate those with allergies. So I said, let’s remove that along with the formaldehyde, and the toulene, and the dibutyl phthalate (also called DBP). And we also still made it a priority to come up with a thicker formula that gives good coverage in one to two coats. (Read more on 3-Free polish here.)

Cult has so many amazing colors that you can’t find anywhere else! How do you develop colors and decide what goes in each collection?

I still play around with and mix my own colors. But I also get suggestions from other bloggers and their followers. They tell me what they want (that doesn’t exist yet). And I’ll post initial swatches and photos online and ask my readers for a “yay or nay.” I get requests from fans, friends, and family. My kids help. Their friends help. We have such an open mind about it, and it leads to great stuff.

People will mix colors at home and mail them to me, or they’ll send me paragraph-long descriptions of colors they envision. Or they’ll send photos and say something like, “How about this flower, but not quite that dark?” Whatever it takes to get their ideas across—It’s quite amazing. Our followers and customers are, hands-down, the best. And I’ll actually send samples back to whomever gave me the initial idea and get feedback. I’ll say, “What do you think?” And once I incorporate the feedback, then I’ll send it to the lab for production. I love getting them involved like this!

What’s the best piece of advice you got along the way?

I was still doing human resources for the first six months after the line launched. And I got a big break when Cinnamon Browser, founder of the mobile nail tech service Nail Taxi, decided to use Cult in a show at New York Fashion Week a couple of years ago. I was so excited, and I went out there for the show on a Sunday, but had to fly back in time to go to work the following morning. I said to Cinnamon, “I’ve gotta get back to work.” And she said, “Work??? What work?!” And then she told me to quit. She said, “You’ll find a way to make it successful if this is what’s going to pay your bills. As long as you have the career to fall back on, you’ll keep falling back on it.” She was right, and my husband agreed. I went into work the next morning, and told my boss I quit. That was it. There’s been no looking back since then.

What’s next for Cult Nails?

Right now, we’re 5–6 collections per year, or about every six weeks. If we can squeeze in another one, we do! We do have plans to expand the line within the next six months and want to tackle all things hands first—so we’re working on developing a formula for remover, and after that, we’ll think about hand cream. Eventually, we’ll go international. We’re looking into distribution in England, France, Singapore, and Australia. And we’re happy to be selling at a company like Beautylish, so that we can focus more on innovating new products and new colors!