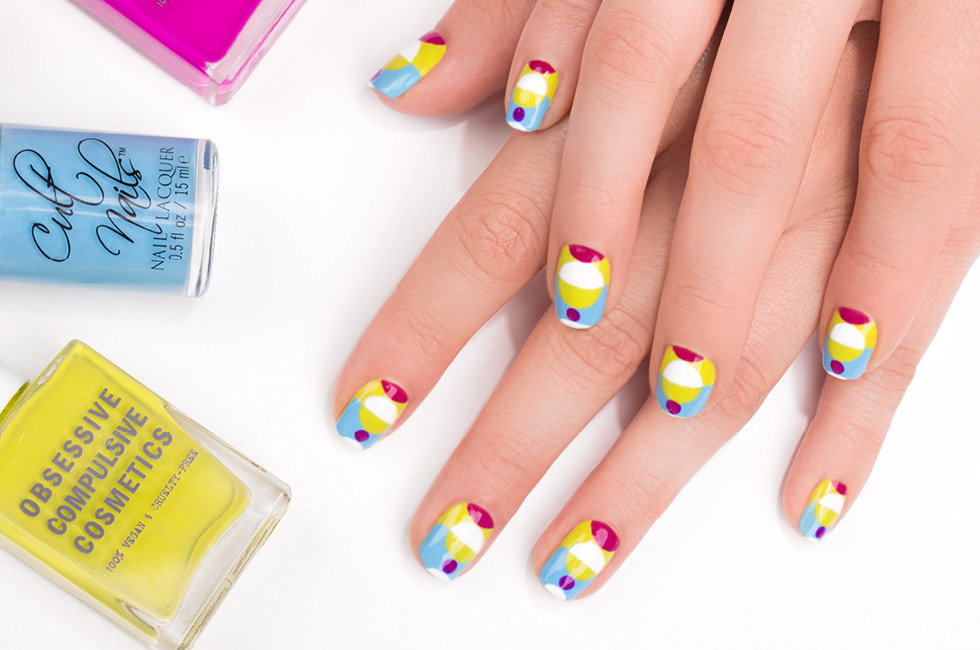 We can’t think of anything better to wear during the bittersweet transition from summer to fall than this graphic mani, designed by master nail artist Chelsea King. It’s a totally cool geometric motif in a color palette that toes the line between both seasons. Grab your supplies and follow along.

The inspiration: When Chelsea first spotted this Marimekko dress, she was drawn to the shapes and contrasting colors (see the original hand-painted design she did on her own nails here). For us, Chelsea recreated the look in a fresh, unexpected mix of lime green, sky blue, neon magenta, and white.

1: Start with clean nails, and do your base coat.
2: Paint a base layer of the green polish on every nail, then do a second coat.

3: Next, take your blue polish and paint a horizontal stripe halfway down the nail. Then fill it in to the tip, so that half the nails is blue (and the other half is still green), as pictured. Repeat on every nail. “Don’t worry if the line isn’t perfectly straight,” says Chelsea, “you’ll be painting a circle over it later.”

4: Dab some green polish on the palette. Dip your brush in and paint a half circle that curves down toward the tip, starting from the top of the line you just painted, as pictured. Then fill it in and repeat on every nail. “If your polish is going on thicker and feeling difficult to work with, be sure to clean your brush in between every nail,” says Chelsea: fill a small cup or bowl with remover, dip the brush in and swirl, then blot on a paper towel.

5: Dab some white polish on the palette. Dip your brush in and paint a half circle to mirror the one you created in step 4. The two should form a full circle now. Finish by perfecting the edge between the two with a thin, straight horizontal line in white down the middle (as pictured below, right). Repeat on every nail.

6: Dab some magenta polish on the palette and dip your dotting tool into it. Make a dot on the blue half of your nail, right in the center, next to the large circle, as pictured. Repeat on every nail. 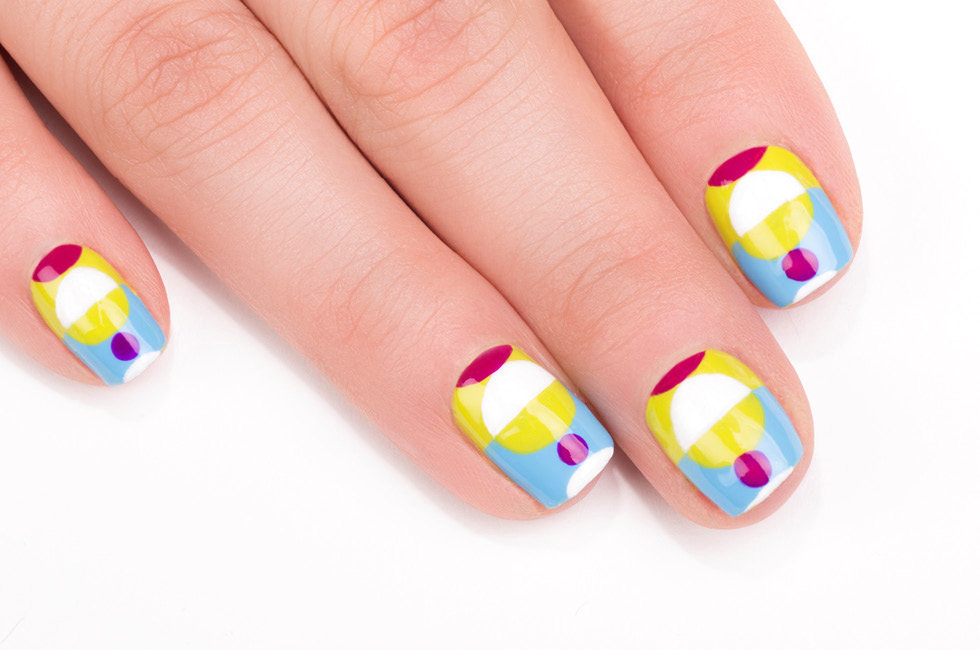 Chelsea King (aka Chelsea Queen) is a nail artist based in Southern California. She fell in love with painting and fashion early on, and started painting her nails as a hobby. After sharing her work on her blog and Instagram, her following took off and she was tapped to create tutorials and designs for Huffington Post, MTV.com, and other sites. Chelsea was featured in the 2012 documentary NAILgasm, about the rising popularity of nail art all over the world, and her work has appeared in Nail It! magazine and People StyleWatch among others. Follow her on Instagram and Twitter @chelseaqueen.