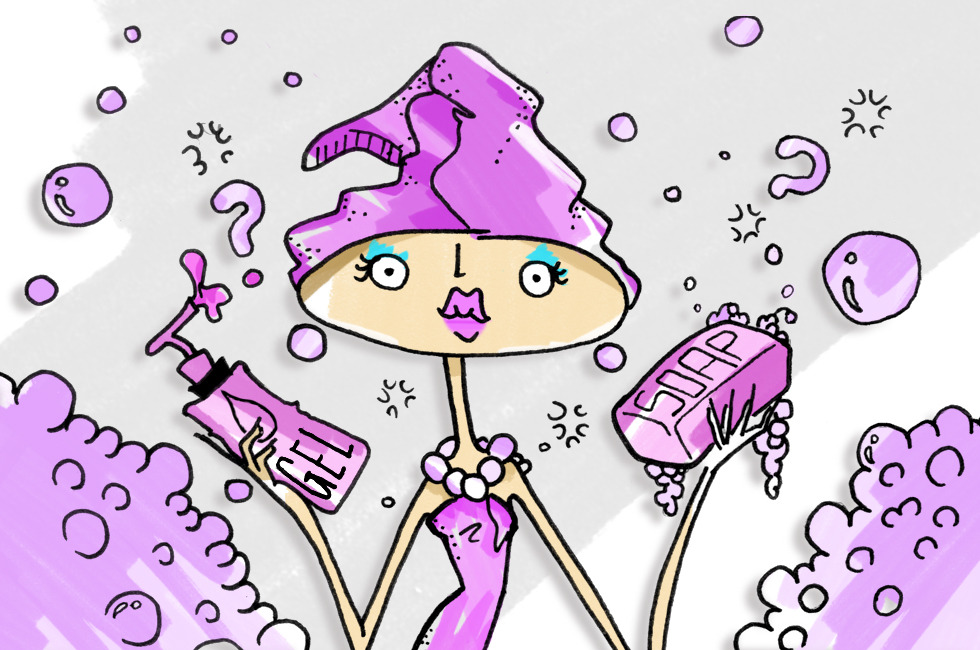 While you’re beauty shopping, trying to figure out which products to buy can be a daunting task, even for basics like picking a body cleanser. Selecting a shower gel or a soap isn’t exactly rocket science, but there are advantages and disadvantages to using both depending on your skin type. The right formula can mean the difference between super soft, balanced skin and skin that’s less-than-stellar. We spoke to Dr. Craig Kraffert, M.D., dermatologist and president of Amarte Cosmetics, and Jonathan Dubuque, creator of Level Naturals, to learn more.

Bar soaps are made by combining liquid fats (like vegetable oils or animal fat) with an alkali like sodium hydroxide (also called lye). The process is called “saponification”; the definition of “saponify” is literally “to turn fat or oil into soap by reaction with an alkali.” Liquid soap is made similarly, but with potassium hydroxide instead of sodium hydroxide. Even though “lye” or “sodium hydroxide” might sound scary, don’t worry. “During the curing process, the sodium hydroxide and water evaporate out of the product, leaving behind just awesome soap,” explains Dubuque. When you see an ingredient like “saponified coconut oil,” that means it’s coconut oil that’s been turned into soap. The structure of the ingredient has changed, so it’s safe for your skin. A good rule of thumb: the sudsier the soap, the less cured it probably is.

You’ll see a little variation in different products designed for specific purposes. “Superfatting,” which refers to the process of adding liquid fats to soap after saponification, is popular for its rich, moisturizing effect. Clear soaps will add glycerin and sorbitol (a sugar alcohol with emollient properties), and products labeled “antibacterial” usually rely on triclosan, a substance that kills bacteria and helps prevent fungus growth.

Shower gels, on the other hand, generally contain the same basic ingredients: water, a foaming ingredient (often sodium laureth sulfate, or SLS), and betaines, the chemical components that help it all stick together. SLS is a bit of a controversial ingredient lately, with more natural brands eschewing the foam-maker in favor of a less sudsy formula (this is the principle behind sulphate-free shampoo, too!). And while SLS has been rated non-carcinogenic by the U.S. Occupational Safety & Health Administration (OSHA), the International Agency for Research on Cancer, and the National Toxicology Program, it may irritate skin if not washed off properly. Some people are more sensitive than others; if that’s you, go with SLS-free shower gel (we like Yes To Grapefruit Rejuvenating Body Wash, a natural product that smells delicious—it’s just $9 for a giant bottle, too.)

So, Should You Use Soap or Shower Gel?

Bar soap is great for removing dirt, debris, and oil from the skin, and it’s easy to apply, either alone or with a washcloth. If you’re an athlete or have a tendency to sweat a lot, bar soap ideal. We love Level Naturals bar soaps for their odor-busting, skin-purifying abilities. For those who are really sensitive, Dr. Kraffert recommends Sebamed Cleansing Bar, which is filled with vitamins, lecithin, and amino acids to keep the skin hydrated.

However, if your skin is super delicate, dry, or eczema-prone, you might want to stick to shower gel. Since shower gels are water-based, it’s easier to get those good-for-you moisturizers in them. “They’re often enriched with extra calming and soothing ingredients,” says Dr. Kraffert, who likes Fresh Citron de Vigne Shower Gel, which has vitamins C and E. The National Eczema Association recommends non-soap cleansers, like Cetaphil Restoraderm Body Wash, for itchy-skin sufferers, and also suggests skipping cleansers altogether during a severe flare, to avoid possible irritation.

Some people might not want to limit themselves to using one or the other, says Dr. Kraffert, especially those that live in climates with weather extremes. “In North America, people do tend to have significantly drier skin during the winter,” he explains. So if you have exceptionally dry and sensitive skin when it’s cold, but oilier skin when it’s hot, you may prefer shower gel during the winter months and bar soap during summer.