Deadly Lipstick and Other Fatal Beauty Practices Throughout the Ages 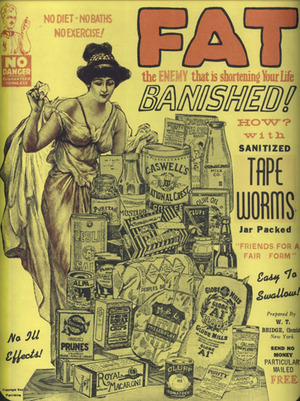 Makeup has been around for thousands of years and until recently, ingredients used in cosmetics haven’t been regulated … at all. Here’s a look at what some unlucky beauty victims have used throughout time.

In the early 1900s, there was one diet craze more extreme than a year-long Master Cleanse: tapeworms. Tapeworms are parasites that can reach lengths of 20 feet and live for years inside your body. Deducing that a tapeworm, if ingested, would grow inside its human host and absorb nutrients that the human eats, quack medical “doctors” marketed tapeworm pills as a diet aid. In her book Seabiscuit: An American Legend, Laura Hillenbrand writes that jockeys likely resorted to this method in order to lose weight before a race. “The pounds would peel away like magic. When the host jockey became too malnourished, he could check into a hospital to have the worm removed, then return to the track and swallow a new pill.” Horrifying, but safer than liposuction? Not quite. The critters may make you lose weight, but can also rob you of vital nutrients like vitamin B12, cause brain damage, blindness, and death. Let us not try this. 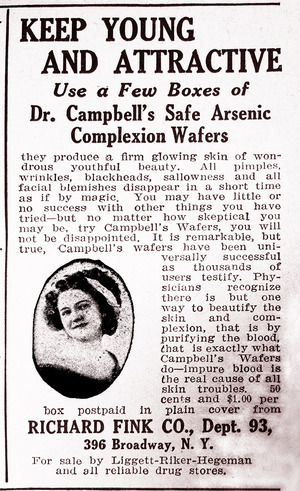 Would you eat something called Dr. MacKenzie’s Harmless Arsenic Complexion Wafers? Well, plenty of people in the 1880s and early 1900s did. It was a multi-tasking product, touted as both a skin lightening (it worked by killing red blood cells) and blemish and freckle remover. The wafers were also known to blind and kill regular users.

Today, we use serums and BB creams to even out our complexions and improve skin tone. But in ancient Rome and Egypt, through to the early 1900s, it was common practice to use pigment-altering concoctions containing dangerously high amounts of lead. Pale skin was fashionable for Roman royalty and nobles—a look that screamed “I’m rich, and never have to go outside!” Their preferred skin lighteners contained cerussa, a white lead that was ground into powder and applied to help erase freckles or make skin smoother and paler. Another common ingredient was minium, a red lead, which gave the cheeks a hint of rosy blush. Many of them did actually achieve the dead-white look they were after … by dying. Not so pretty. According to The New York Times, Nefertiti and other ancient Egyptians also used lead, arsenic, and other metals as cosmetics—it made sense, because the color pigments were beautiful, and they were easily ground into powders. Strangely, scientists think that the lead may have acted as an antibacterial, and fought infection. Sounds divine, but using these metals on the skin also caused infertility, madness, and, eventually death.

Lipstick has been around since ancient Egyptian times, and commonly has contained hazardous levels of lead, arsenic, and mercury. You know, just your average highly poisonous heavy metals that can build up in your system over time, gradually causing blindness, nausea, paralysis, muscle atrophy, and even death. Today, high levels of lead and heavy metals in cosmetics are outlawed by the FDA, but routine testing shows that on occasion, traces of both are still sometimes found in common makeup lines. 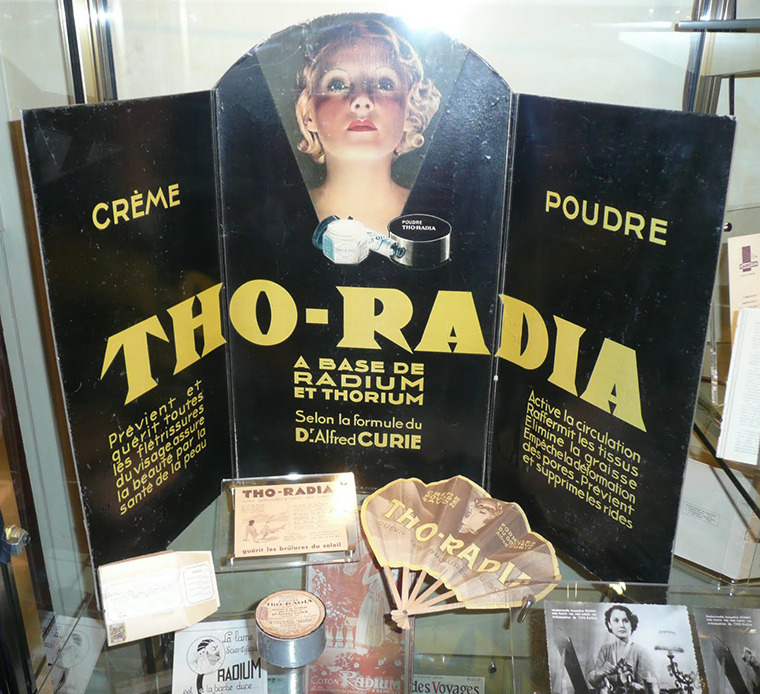 The public’s imagination grew strong when X-rays and radioactivity was discovered around 1895. And following was the discovery in 1903 that many hot mineral springs contained radioactive water. Sick people often visited these “curative springs,” in the early 20th century, as the common medical opinion was that radium (a highly radioactive and luminescent chemical element) could cure cancer, arthritis, gout, and give you a healthful glow. Next came Radium Emanation Bath products, that were, you guessed it, treated with radium. After tossing them into the bath, you were to emerge refreshed and invigorated by radiation … and possibly sick. Once it was in your tub, it stayed there. And of course, radiation can actually cause cancer. Relaxing bath, no?

Have you suffered for beauty? Hear of any other crazy makeup practices from long ago? Share in the comments!