I Do What I Want: Theo Kogan for Armour Beauty 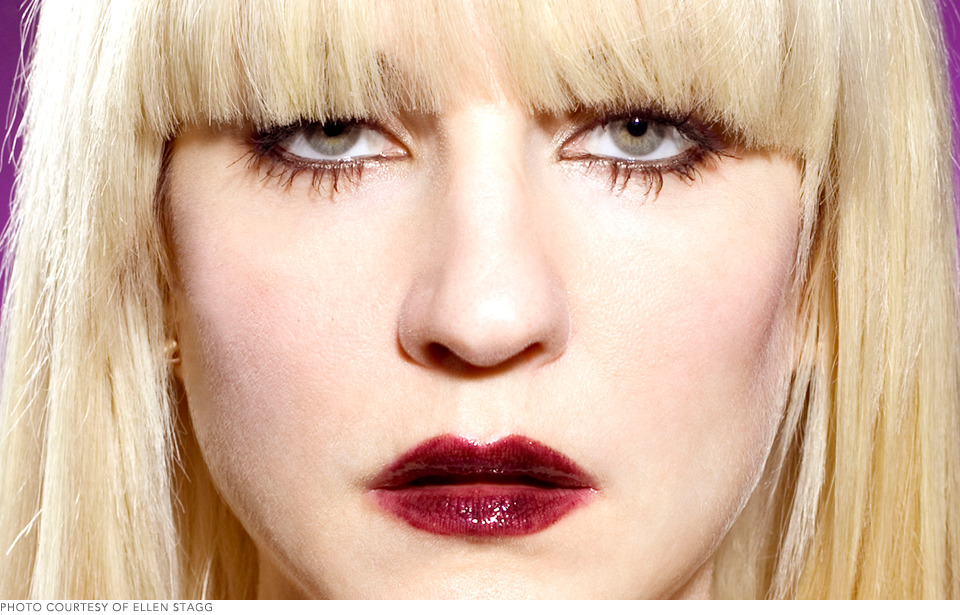 One of the first people that come to mind when I think of the crossroads of art and beauty is Theo Kogan, CEO of the lip gloss empire Armour Beauty. Theo is a native New Yorker who studied art at the “Fame” school until her band The Lunachicks took off, establishing her firmly as a punk rock icon pretty much right from the tender start of her performance career. Theo was the first tattoo-sleeved “outsider” model, photographed by such greats as Testino, Avedon and Meisel. As an actor, Theo has been directed by Scorsese and Jane Campione… etc. etc. Let’s just say this lady is experienced.

I know firsthand about the ferocious spirit of this woman and cheered when she threw herself headlong into the world of makeup, both as a creator and artist. Theo navigated through music and modeling in such a tough yet gorgeous way, none of us were surprised at the success of her equally tough and gorgeous brand.

Stars like Eva Mendes, GaGa and Karen O are fans of Armour Beauty. I was happy to meet her in Brooklyn to hear her beautyDish on where she’s at these days. 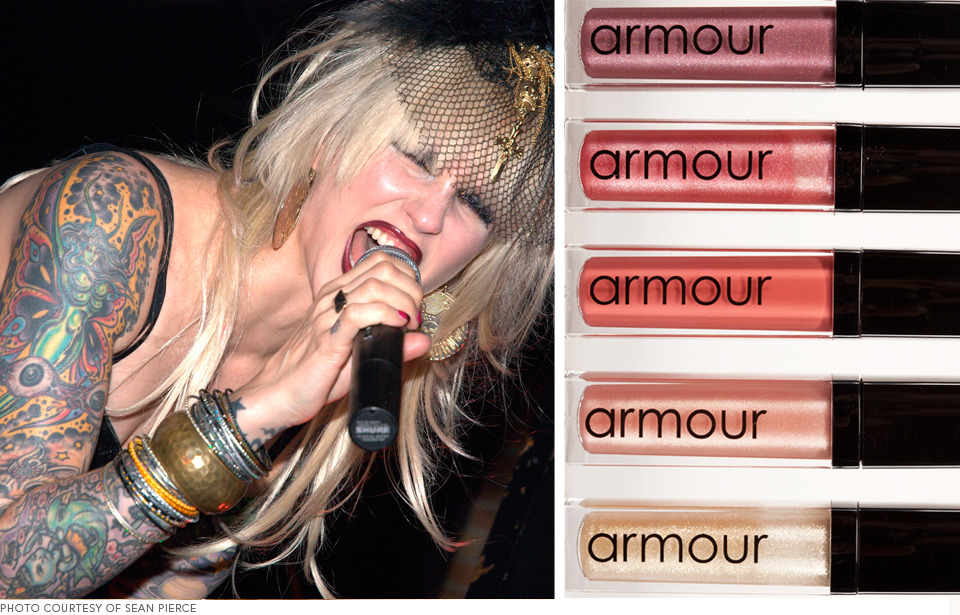 B: Can you tell us how your path went from music to makeup?

I’ve done my own makeup through the years for stage, of course. Originally the punk looks were Manic Panic, Brucci and Wet n’ Wild. As my looks got bigger, I learned so much from my drag sisters and mothers—people like Miss Guy taught me how to make my own lashes. I always watched Lady Bunny’s looks, they were so BIG.

I was acting in a play I co-created called Screen Test in 2006, and just got this light bulb moment about a lip gloss line. I called a friend who was in the business, and I was off to the races. The line launched in 2008 with a solo relaunch in 2010. I jumped into the fire from a bungee cord; the craziest thing for me was that I didn’t know much about the business before I started, so there were definitely learning curves. When I first started the line I went to every store that had makeup—from highest to lowest, makeup supply stores to Barney’s. I looked and looked and tested, saw what was there, and saw that I wanted to make something with more of an alien edge to it, but with natural ingredients. No animal testing, something that was accessible and yet also felt like luxury, this was something I felt was missing in all I was seeing. The vision for my brand was to create a rock ‘n’ roll Chanel.

It's always been so much fun to create these colors. Having been a model and performer, I knew there were products that tasted bad, that slipped right off, and I wanted something that was going to feel good, stay on, and not dry out your lips. Each Armour gloss has its own personality; some are sheer on the lips, some thick, each different. Each color is named after an iconic woman or song or nightclub. The latest two colors are Lucy, for Lucille Ball, and Marilyn, for Ms. Monroe. A vegan formula is in the works as well. 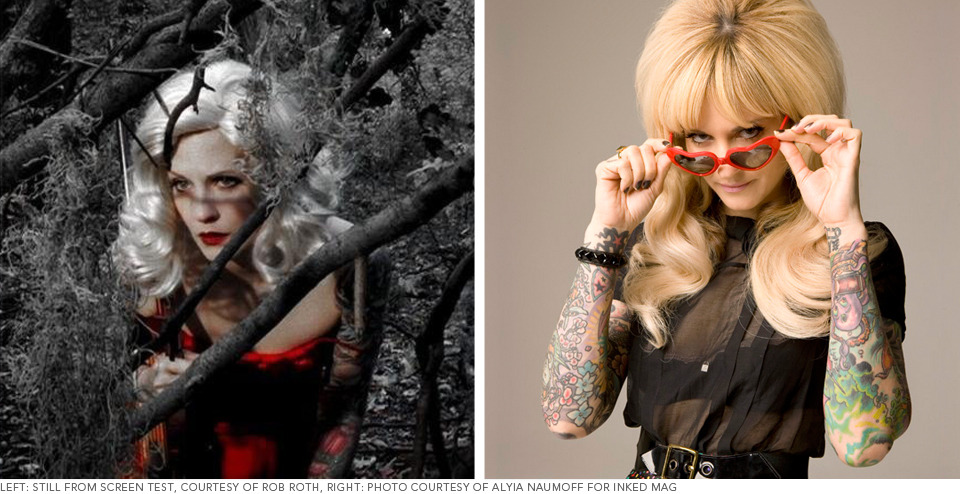 B: So the makeup line came first before you became a makeup artist?

Yes. I had always done makeup on myself, but when I launched my line it made sense for me to start taking my own skills to the next level. When I started to do makeup for other people I learned so much from artists like James Vincent and Mike Potter, and found that the makeup community as a whole is very open and sharing—very community-based, everyone helps support each other. It’s like ‘how do you do that trick’ or ‘what’s the best mattifier’. It’s not like a cooking scene where people refuse to give away their secrets, or like my grandma said, she had a friend who would leave out an ingredient when sharing recipes.

Ha! But it’s not like that, I’ve found that makeup artists always want to help each other. The first airbrush course I took was with OCC and Orlando Santiago, who is a great company as well.

B: How does the independent spirit come through the makeup line?

I do what I want. I pick the colors that I want to see, and balance that with what other people want, but it’s all from my perspective. I see the beauty in all women, these glosses really show up on all skin tones, intentionally, which makes me happy that they’re really for all women.

I want people to feel beautiful and feel empowered wearing my products. The name Armour Beauty is about feeling empowered by your own beauty—meaning accentuating what you already have. Sometimes you can have a shitty day and then you put on a lip gloss and you act as if ‘I now feel fierce because I look good,’ and the day can change. I’ve gone through that. When I feel down in the dumps and I’ll put on a face and go out, it feels good. Change your face, and your mind may follow. 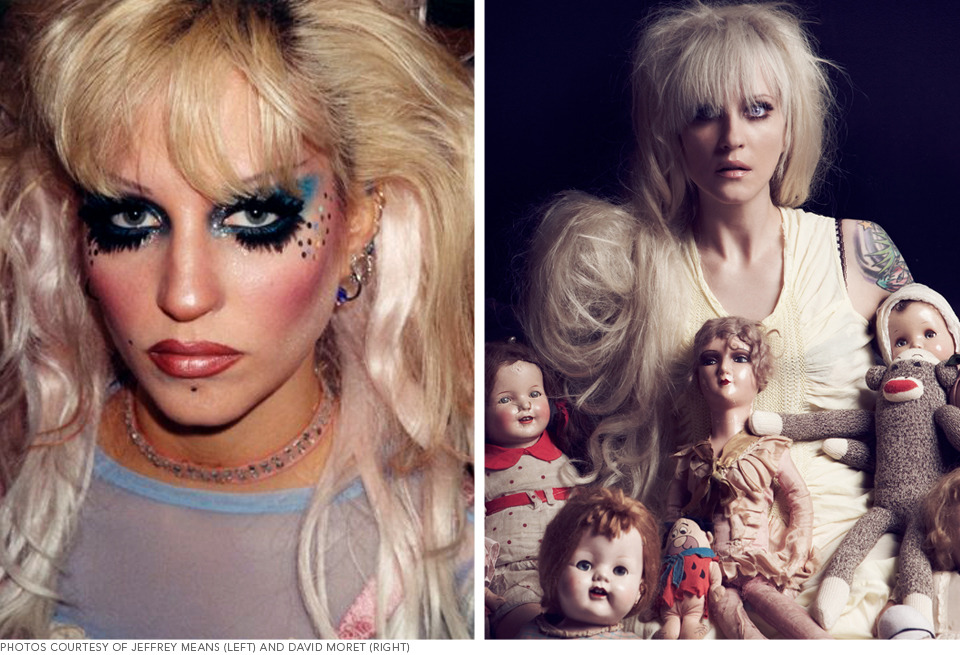 B: Let’s talk about individualism, which to me is something you truly exemplify.

Where is it? I always love to know. It makes me so happy when I see it. Now online, I see young people are changing so much. The makeup tutorials you see online are really shaping the stories in the world of fashion. I have all these interns working for me and they are like ‘I will not buy anything that doesn’t have a tutorial review on YouTube.’ It’s much better than looking at a picture in a magazine as a way to check out products. Young women like Queen of Blending for instance—she did an amazing Armour swatch review which got over 20K hits! These women at home who are amazing makeup artists are the ones who are making it happen, who are making a difference, shaping and changing the market. They are the beauty experts of tomorrow, this minute, today, without going into a corporate office once. That is totally DIY!

B: What do you have to say to these ladies?

Thank you! And I always tell them to write to me and I will send you gloss. 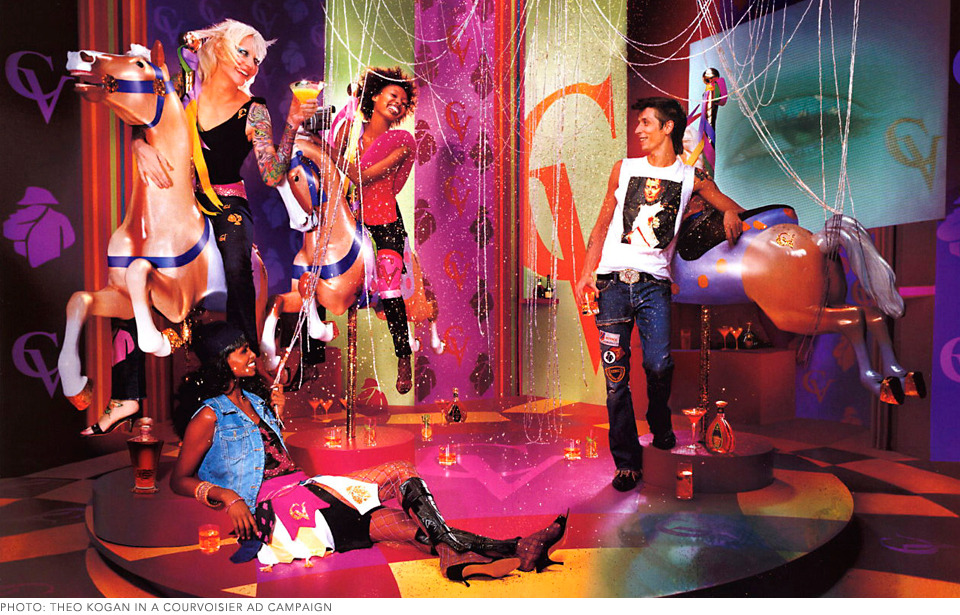 TAGS:    Features   Behind the Brand