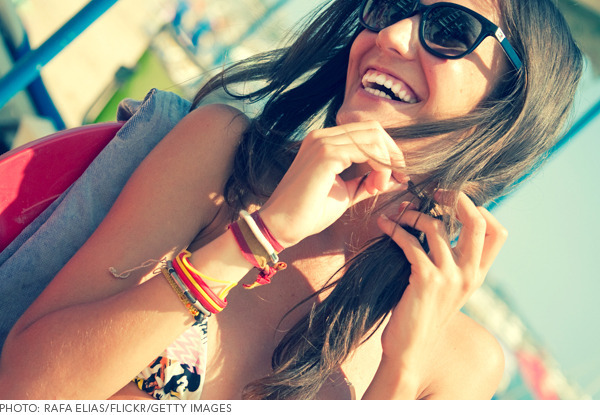 In my baggy sweatpants and sweatshirt, hair pulled up in a messy bun, I flipped through the pages of my favorite fashion magazine. One by one, I absentmindedly turned the thin, slippery sheets until I came to a dead halt—I stared at a photo of an incredibly thin and tall model, draped head-to-toe in designer clothing. Her hair was frozen perfection, and her assured gaze pierced right through me. I scanned the photo, top to bottom: Chiseled cheeks. Thick gold jewelry. Not an ounce of fat. Behind her was a white modern couch that looked as though it had never been touched—yet was somehow so inviting—and floor to ceiling glass walls that practically kissed the ocean outside.

The model herself was, apparently, a force to be reckoned with. The article’s writer discussed her cool, unfettered demeanor, her slightly defiant laugh, and the subtle awkwardness that made her downright lovable and, simply put, completely entrancing.

“I want to look just like that,” I thought to myself.

I ripped the page out and put it in my desk drawer for safekeeping, along with other photos. I always did this. For years I had been ripping out magazine photos that were a source of inspiration. Pictures that captured a moment of how I wished my life to be. I would use them as reminders of how I wanted to look, and I would post them all over my house—on my bathroom mirror, on my fridge, and by my front door.

Pictures of extremely thin women living an incredibly glamorous and fashionable life. Pictures of a life that I did not have, but so desperately wanted.

As a fitness expert, my health tips and workout routines have often been featured in magazines using images of tall, willowy models to illustrate the moves. But I will never forget the first time I got the phone call that I was getting a huge spread in a magazine, and I was going to be the model. At first, I was overwhelmed with complete gratitude and joy at the news, but it was short-lived as I held the phone and looked at the spread of the rail-thin model loosely taped to the back of my front door. I remember looking down at my hips, thighs and slightly descended stomach, and immediately being awash with feelings of unworthiness and shame. 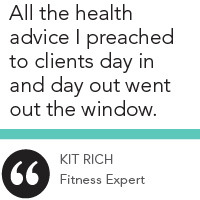 I had one week until the photo shoot and, suddenly, all the health advice I preached to clients day in and day out went out the window.  I went on a plan of fad diets and torture. NO eating after 4 p.m. NO carbs. VERY small servings. NO wine. NO sugar—including fruit. ONLY vegetables and lean protein. 100 ounces of water a day. I worked out twice a day and wore clothes that made me sweat all the excess water weight out of my body. I finished each day in the sauna to lose even more water weight. I had my plan. It was all set. I was on my path to thin, thinner, and thinnest.

What happened next was completely unexpected. My need for control backfired, and suddenly—I had none. I was eating and drinking everything in sight. Cookies, pizza, martinis…you name it. I ate and drank myself into oblivion, and my workouts were less than motivated. As much as I was fighting my body, it fought me back twice as hard. And it won.

The night before the photo shoot, I was nowhere near my goal. If anything, I was slightly bigger, completely and utterly disappointed and ashamed of myself. My heart hurt from embarrassment. Who was I? How could I have let myself do this? I felt like a hypocrite—I didn’t deserve to be a model—especially a role model for health. I remember falling onto my living room floor, feeling the river of tears running down my face and staring at the photo of the model on my front door.

“Of course you didn’t lose weight, Kit,” I thought. “You don’t deserve to be that happy.” 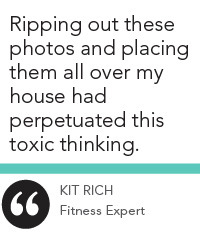 Then, like a bolt of lightning striking my body, the realization hit me, and I jumped up and ripped the photo off the door. These magazine photos had been reflecting a deep inadequacy that I had been feeling my whole life. The pictures were glamorous indeed. They represented a life of opportunity and success. But the price of admission was being model thin. If only I were this thin, I would get this life and be this happy. And all the years of ripping out these photos and placing them all over my house had perpetuated this toxic thinking.

It was a false advertisement for happiness. And I realized that I was about to be one of the models that some young woman would stare at thinking she wanted this life too. And here I was, an insecure mess on my living room floor.

That night I faced three realities. 1) The photo shoot was happening regardless of how many pieces of pizza I ate, 2) that I booked the job for reasons that had nothing to do with my looks and 3) that I had the opportunity to be a different kind of inspiration.

A few months later, the issue was published and on the stands. In my baggy sweatpants and sweatshirt, hair pulled up in a messy bun, I flipped through the pages. One by one, I turned the thin, slippery sheets and came to a dead halt at a picture. But this time it was of me. There I was. By no means model thin. But there I was. Strong and healthy. In photos taken the day after that fateful night—when I pledged to myself that I, for no other reason than just because, deserved to be happy.

Kit Rich is Los Angeles-based fitness trainer with endless exercise and nutritional know-how. Hollywood's hottest stars are addicted to Kit's unique, multi-disciplined approach that combines cardio, yoga, Pilates, and weight training. Kit's clients are immediately taken by her funny and honest approach to health and fitness. She treats her clients as she treats herself, "with a hard challenge, sensibility, sensitively, and a good laugh." Follow Kit on Twitter @kitrichfitness.