Juice Your Way … to Workout Energy! 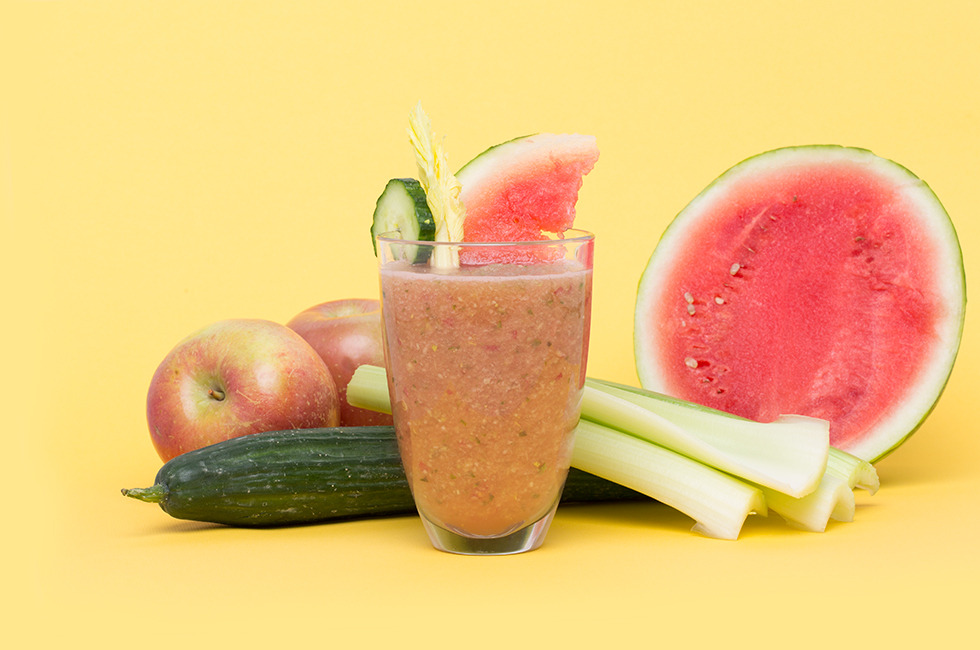 I know you’re supposed to like the gym because it makes you feel good. But between you and me, when I’m in a spinning class dying and there’s still 45 minutes left and the instructor is wearing a Janet Jackson–head microphone and yelling at me while his techno music mix kicks into high gear, it can be kind of hard to remember why I paid money to do this.

To help me get through the wall of “why am I here?", I need a little more energy during workouts. And my post-workout recovery snack has be dee-lish, or I’ll “forget” to eat it. After all that effort, it has to be something I want to eat, something that isn’t shaped like a banana or protein shake.

So, I came up with this, a pre- and post-workout raw juice that’s tasty and full of stuff that provides both a boost of energy and helps muscles recover. Here’s the trick with this juice: you drink a little bit of it (say, four or five ounces) before your workout, and you get a little rush from the naturally-occurring sugars inside. After exercising, you drink a bigger serving (around eight to 12 ounces), and you get mega-hydration, plus vitamins. And you never have to go near Muscle Milk. If that doesn’t sell you, nothing will.

Juice for Pre- and Post-Workout Energy

Note: If you don’t have a juicer, this will work in the blender. The juice will come out a lot thicker, but the raw nutrients will still be there.

1 large whole cucumber
Cucumbers are a great source of potassium, one of the major electrolytes that is lost when we sweat. They’re super hydrating!

4 large celery stalks
The humble celery is actually a wonderful source of live and soluble sodium, the other major electrolyte we lose during workouts. Celery is also an anti-inflammatory, helping to keep muscles calm and digestive tracts happy.

2 apples, any kind
Apples have naturally occurring sugars that give us a boost of energy, and because they’re high in fiber, you won’t get hungry during exercise. And you’ll feel sated when drinking the juice post-exercise.

2 cups (roughly; eyeball it) watermelon
Watermelon is the new darling of the workout world—recent studies have shown that watermelon juice contains high levels of the relatively rare amino acid L-citrulline, which prevents sore muscles after an intense workout.

Wash everything, then toss in your juicer or blender, and hit the “on” button. If you’re blending, add a cup of water to help liquefy your fruit. The mixture will start out light green but, thanks to the watermelon, will rapidly turn a (sort of fugly) green-pink-brown. But looks aren’t everything when it comes to juice! This one tastes like candy, and I don’t lie about anything candy-related.

This recipe will make roughly 30 ounces of fresh juice, which you’ll need to keep in the fridge in an airtight container (stir before drinking). Drink it all up within two days, and then … make it again! Finally, you’ll be able to beat that person who picks the treadmill next to yours and spends the entire time going slightly faster than whatever speed you’re on.