Works with the 3 step.

I started using this in February because I had some dark spots from acne scars a long my jawline and on the side of my cheek that I usually sleep on (go figure -__-) I was upset because I didn't think that it was working and I had spent a lot of money on it, although it was less then what others seem to have paid (bought on military base) anyway, after a few weeks I didn't notice much, maybe because they were pretty dark but then I went back online and read up on it and saw that It said I should use it with the 3 step system. I had never used there 3 step so I was iffy but I went back to the store and found they had a trial pack (yay!) it was 10.00 so I couldn't beat that with a trial cleanser, normal size toner, and trial moisturizer. I started using it and wow, I have to say the it really did help with the fading of the scars. Scars that I could see through foundation coverage can now be covered with even a lightweight foundation. It makes me so happy because when I take photos, which I have one up where you can see scars, they don't show up as much if at all. I really am glad I have been using this, and I got it mid February, it is May now and still haven't finished the bottle. I think it was well worth it and I am going to be purchasing it again. As far as what they say because it has some bad stuff about it, now a days, what doesn't have bad stuff about it. It seems like everything causes cancer and harm, most stuff is good in moderation, so I am fine with it because I have seen with my own two eyes it's done more good then bad and I am proof that it works. 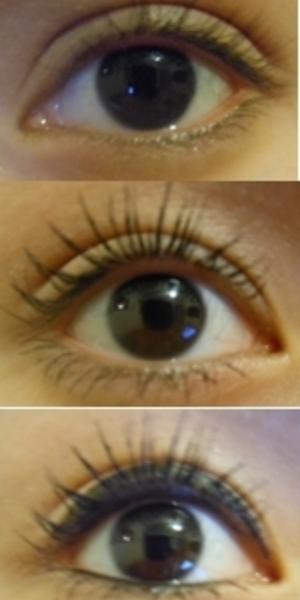 This is pretty much the ONLY mascara I buy from drug stores. For me, reading bad reviews kinda just shocks me because I love this Mascara so much. Whenever I wore it in school I would always get asked if I was wearing fake eyelashes, which I have never worn before. I like the brush because it isn't stiff, it does what it says "Defines a lash" and the formula isn't automatically thick so you can choose whether you want a light application or a heavy application of mascara. It lasts a really long time, and for me it pretty much never clumps.

The picture is my eye with no make up, just mascara after one application, and with full eyeliner

I like to try out a lot of different nail polishes from expensive to "cheap" Forever 21's Love and Beauty has such a wide variety of colors I love them. I like the simple packaging that makes the colors pop. They usually take 3 coats, but most nail polishes do. I don't think they chip easily either, unless you are a dishwasher 7 days a week at work and at home I don't think you are gonna have trouble with chipping.

I love this, it's so light and not greasy, I can apply it before and after foundation as needed. It doesn't smell, and i think it is just perfect for my skin. Sometimes I get dry spots, especially after a breakout that is going away, and I just dab a little on and I don't have to worry about it causing more breakouts! I use the whole 3 step routine and this moisturizer is the icing on the cake because it dries fast which is what I was looking for.

I got Sky, it was 4.00 at Wal-mart. I expected it to be good, I had never used them before, But I heard Hard Candy was a good brand. I am using it for the third time, I have been painting my nails for a stretch of 3 hours because the coats streaky and the nail polish kinda dries goopy? It takes 4 coats or more, but 3 coats definitely doesn't produce the full color, I have some parts of the nail lighter -__- My nails are usually pretty easy to paint, lots of room and I have a steady hand, but this nail polish gives me trouble. Probably won't buy a pastel again. Maybe a brighter color or a glitter, just to try it out. I can say I have bought better nail polishes for $4 or less.