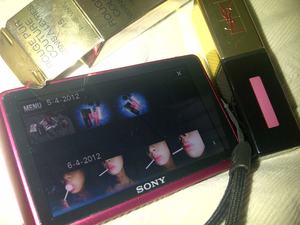 awesome product, but not all the shades are suited for what it does. do not purchase this product online.

i got this on St. Patrick&#39;s Day and it&#39;s Easter now, so i think i&#39;ve had it long enough to review. YSL must be employing some really awesome scientists at their R&amp;D labs. :3

but i&#39;m a little dissapointed that it&#39;s a bit sticky (instead of sleek and water-like like Dior&#39;s lip stuff). it&#39;s kind of like the stickiness that i get from my NYX SoHo Glam Collection&#39;s lip colors--which i love. the staying power makes it worth €27. the staying power is almost scary, i needed to use eye &amp; lip make-up remover--which i&#39;ve only ever used for mascara before this. but i do trust that this won&#39;t be any more dangerous than getting your lips orange from eating popsicles. because it&#39;s very pigmented and you can&#39;t just wipe it off you if get too much on, so i use it sparingly. i actually just dot my lips with the lip of the applicator and smudge, that&#39;s the only way to get a natural look.

another thing is: i got the #15 one (Rose Vinyl) which is an awesome shade. i don&#39;t regret getting it at all. BUT! the product is meant to be used as anything from a stain, lipstick, to lip gloss. but i think #15 only works best as a lip stain after smacking a full layer off some Kleenex (it&#39;s a very natural/fleshy pink as a stain). i attached a photo of what it looks like as a stain. my zero photography skills and i tried our best to play with lighting to take an accurate picture of the shade (i apologize for the exaggerated nostrils, i blame the lens). it does look like a dusty-pale pink with gray undertones on the applicator and in the bottle, but its true color comes out after you press your lips together.

as a gloss it&#39;s terrible. after a couple of layers, you end up with a rather milky/creamy gloss, which is super icky-looking. TBH, i don&#39;t mind at all because i just wanted a stain/a more subtle look anyway. i&#39;m just saying this in case anyone wants to buy #15 as a gloss (and not a stain). i&#39;m not saying it doesn&#39;t do what it claims it does, but some colors aren&#39;t suited for doing everything it claims it does--which it does (i think colors like #7 or #11 would work in as all three). even as a stain, it&#39;s still a bold color that&#39;s good for the evening.

also, DO NOT purchase online! you NEED to walk into a department store and swatch them. for instance, i tried out the #12 which looks very pretty on the brochure YSL dropped me and online (official YSL material and blog reviews alike). it was supposed to be a &#34;coral&#34;, but it left a light tangerine stain on my hand, it&#39;s darker than i thought, and there&#39;s nothing pink/coral about it. 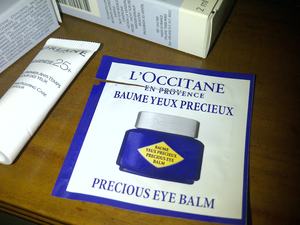 will not be purchasing the full-size version, very rich, not very moisturizing/helpful...

the &#34;Eye Balm&#34; is precisely what it says it is, it&#39;s a balm. it&#39;s very rich, even richer than The Body Shop&#39;s Wise Woman Eye Cream. but unfortunately, it doesn&#39;t absorb as well. instead, it just kind of dries off on your undereyes, it actually reminds me of Elmer&#39;s glue. i mean it&#39;s okay when Clinique Acne Solutions Clearing Moisturizer does that because it&#39;s an oil-control/anti-acne product, but if a product does that on your eye area, that&#39;s just bad for ageing, right? instead of hydrating my eye area, it kind of made it tight and dry. and i&#39;m upset that the dark circles Orlane Anagenèse 25+ got rid of are back now. :(

i don&#39;t hate L&#39;Occitane. in fact i LOVE their solid perfumes: best travel items ever (with European TSA&#39;s silly liquid rules and all). but this is their first skin care product i tried out and i&#39;m really unhappy with it and i will not purchase the full-sized pot. sorry. :( 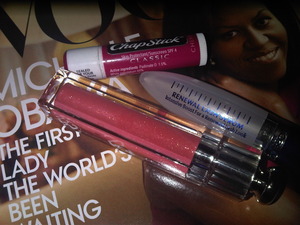 i love it! i bought it because i had a try at the counter (they&#39;re super friendly at the counter) and i love the way it feels on my lips. all slippery and not sticky and it doesn&#39;t dry my lips. the color is also very pretty! the make-up artists at the counter suggested it and i love it. i came back to get one after. it also has the sweetest light rosy-tea (and maybe grapefruit) scent ever! it&#39;s sort of faded off (i think i bought this in August 2011 and it&#39;s March 2012 now) but i can still smell it. :3

my only complaints are: the brush is too big and it picks up too much product for me (and my lips aren&#39;t even tiny) and i could do without the glitter bomb. sometimes my lips will look like a disco ball, which is kind of annoying, but i can live with it because it&#39;s such a pretty color.

the truth is, i was just discovering make-up at charm school and i didn&#39;t know what i wanted at the time, this wasn&#39;t even on my wishlist. and i would never have considered Dior. so this was an unplanned purchase. but i had Chinese New Year gift cards, so why not? zero buyer&#39;s remorse. i&#39;ve never owned anything from Dior before this (although Miss Dior Cherie is on my wishlist and i love their Sofia Coppola ads) so i didn&#39;t know what to expect. but i&#39;ve come to a point of trusting them so much that i purchased Dior Addict Lip Glow from Sephora ONLINE without ever test-driving first. thankfully, i wasn&#39;t disappointed either. J&#39;adore Dior. :) 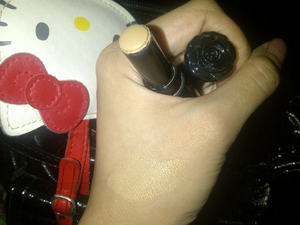 covers my pimples and dark spots from acne well, sometimes it smudges off when i use blotting film/paper if i'm not careful...

i&#39;ve been using this for those hyperpigmented spots you get from acne (because they take a while to dissapear) and it&#39;s not bad. i like that it&#39;s not like cake icing at all and it doesn&#39;t show, because i typically don&#39;t wear any foundation/make-up. it&#39;s okay. i think i&#39;ll try another brand next time. i just ordered a 3 dollar concealer from ELF (it comes in 4 shades in case you get tanned/paler too) and i&#39;ll see how that works out. if it&#39;s not as good as Anna Sui&#39;s one, i might get this one again. sometimes it smudges off when i use blotting film/paper if i&#39;m not careful... :(

also, it happens to be the perfect shade. can you even see that i put some on my hand on the photo i attached? i can&#39;t even remember how many shades there were, because i got it with my little Anna Sui Mini Rouge in around 2008-ish. the make-up artist at the counter just tried this on me and worked fine so i bought it. :)

awesome, but i also still use alternative brands...

i love this blotting film. so ALWAYS have these things in my purse (or another film brand that&#39;s manufactured by a Japanese pharmaceutical company called Rohto-methol-something&#39;s acne-care line and it does the exact same thing except they come in minty-turquoise and i like that color better). also... because this is affordable but IMHO not reasonably-priced, i only have this in my purse for going out when i don&#39;t want to smudge powder (that&#39;s translucent anyway), but i have cheaper type of blotting paper that&#39;s made of rice paper that i use at home. so i&#39;d say i DO love it and it does a great job, but it still isn&#39;t special/different enough that i&#39;d exclusively stick with Johnson &amp; Johnson or always use it non-stop.

PLUS: the rice paper ones are more environmentally-friendly. 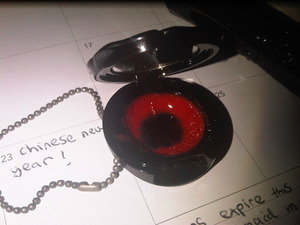 this smells wonderful and also fits nicely in small purses and coin purses, but i hate how it dries my lips (even with Chapstick on). it like, sucked the life out of me like a Dementor&#39;s Kiss, okay? not cool. :| 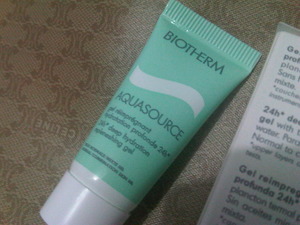 makes my skin feel velvety and nice, my oily-combination skin loves it, doesn't clog pores, smells nice, but too pricey!

a lady at the Biotherm counter at the department store gave me 5ml tube a while back, but i&#39;ve only started trying it out now (because i wasn&#39;t too excited about it). i suddenly remembered about it after reading this article here: <a href='http://www.beautylish.com/a/vcycr/moisture-101' rel='nofollow' target='_blank'>http://www.beautylish.com/a/vcycr/m...</a>. and i dug it out to try it. it came in the cutest teeny-tiny Tiffany&#39;s blue tube ever (it&#39;s so cute, i can&#39;t bring myself to throw it out, LOL). so, i just tried it out and it made my skin feel really velvety and soft. love, love, LOOOOOVE!!!! it also didn&#39;t make my skin greasy or make my acne worst. it also has the nicest, freshest smell ever. :3

i really want to give this a 5, but it&#39;s so expensive. AND it doesn&#39;t even have any SPF in it. when i realized this, i was really dissapointed--because if it had SPF in it, i would have saved up to buy a full-sized version of it (i mean seriously, what&#39;s the point? putting sunblock on top of this would spoil it anyway). :(

so i&#39;m giving it a 4+ instead. but i&#39;m still glad i got that sample, though, because i might just buy something from Biotherm someday (i wasn&#39;t really that aware of them before).

it works, and i'm going to buy some more and until i can stop using mascara!

my main goal is to have skin and features so flawless and naturally beautiful that i will need very little make-up and be able to leave the house with ONLY moisturizer + SPF, lip gloss, and eye cream and this helps. the results started to show by the third week of using this twice a day (after morning shower and before bed after washing face + brushing my teeth).

it hasn&#39;t actually made me grow NEW lashes, but it has kept them on for longer periods of time and less lashes fall everyday (sometimes none falls out when i&#39;m cleaning my mascara off--but then again i use a gentle oil-based remover). it HAS made my lashes longer, though. like i was at the department store the other day and the shop assistant at the MaxFactor counter actually said that i don&#39;t need the type of mascara they have for lengthening lashes because &#34;your lashes are long enough already&#34;, instead she recommended the type they have for keeping my lashes from clumping together (because i told her i&#39;m really bad at putting on mascara). i was so pleased! :3

also, it means that i get to stop wearing mascara (when i wear mascara, sometimes my lashes crash into my glasses, not all of my glasses just one of them, but they&#39;re my most comfortable pair). i&#39;m half-way through my second bottle already and i think i&#39;ll get another 4 bottles for the entire year. i hope L&#39;Oreal doesn&#39;t discontinue this! :)