Not bad for a cheaper mascara

If you're on a low budget, this is a good mascara to go by. It does clump sometimes, but you have to expect that with a cheaper mascara. One thing I like is that it dries soft and not hard and crusty like some mascaras. It is great for the lower lashes, since the applicator is small, but not so much for the upper lashes. I probably wouldn't buy again just because I need a applicator that can fit to my upper lashes.

I would add the shade I own which is "Gusty Green", but they don't seem to have it on the list? Maybe it was a limited edition? I love this palette. I love the pigmentation of the colors and they blend very well. The only thing is I wish they would have at least one matte shade, possibly the darkest shade. But all in all, they give a great look, and it's very versatile. Would buy all the palettes! I would recommend for sure.

Chips too quick even with a base and top coat

I really love the shades a hues of China Glaze's collection, and I really want to like them, but after numerous times of wearing them (with a base and top coat) this stuff chips the next day. I don't even do much with my hands for it to happen. I've heard a lot of my friends saying the same thing, so I know I'm not the only one. I would buy this nail polish if it didn't chip so much,

The only thing this mascara does for me is lengthen, but I want volume too. This makes my eyelashes look sparse and skinny. It also clumped quite a bit, giving me spider lashes. It works great for my bottom lashes though. I'd rather stick with the Maybelline's $5 mascaras (Plush, Falsies, Rocket ect.) They always make my lashes longer AND thicker. Would not buy this again.

One of the Worst Eyeliners Ever

I have always liked Maybelline's products until this one. I do not like this eyeliner or anything about it. The only reason why I bought it was because they were out of the Maybelline Line Stiletto Liquid Liner, which is what I always get. The brush is not good with control, I mess up a lot more than I would with a sponge tip. The liquid dries into a crisp (probably because it's the waterproof ingredients, I have no idea) and when I apply to my upper lash line, I end up getting it on my eyelashes (no matter how hard I try to avoid them) and they end up clumping and sticking together ruining my whole look. It says it's waterproof, but I have never tested it for that. Don't really care to either. Never buying again! I'm only giving it a star and a half because it lasts a while. Not worth it though.

Love it Except The "Dewy" Finish

Basically it is one of my new favorites, because of the good coverage, yet it's very lightweight. Also makes my skin feel very smooth. Just don't care too much for the "dewy" finish it gives off. I have a blog post review about this with before and after pictures and more details of what I like about this cream. http://makeupblossom.blogspot.com/2...

Stila In The Garden Palette

Great palette for all eye colors

Here is my video explaining a bit about it: http://www.youtube.com/watch?v=nV2M...

I also have a blog review on this palette. http://makeupblossom.blogspot.com/2...

Great variety of colors & great pigmentation. A great palette for spring!! The eyeliner is great too, but it isn't black like everyone thinks...it's a dark olive color with gold flecks. Still a nice eyeliner & very pigmented.

First of all let me say, I love the smell of this product. It smells so refreshing, like grapefruit or some sort of citrus smell. I love the little scrubber that comes with this product, it really seems to help exfoliate a lot better & get deep down than just massaging with your fingers. My skin feels smooth and clean, without stripping all the oil from my face, so my face never dries out.

MAKE UP FOR EVER Aqua Eyes 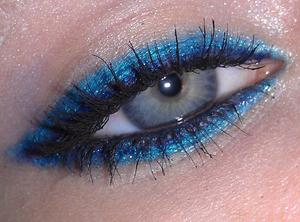 I love this eyeliner. Although I sometimes have to warm the tip of the pencil up with my hand/finger to get it to go on a little smoother. It is however waterproof, so that makes up for it. And it's very pigmented and bright as you would expect it to be. I've used mine up so much, now it looks like a mini travel-sized pencil :) 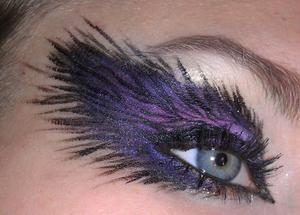 Pretty amazing for the price

I thought 10 bucks was an awful lot for a Maybelline eyeshadow (because usually some of their shadow palettes aren't the greatest), but it's almost as good as the $20 high end brands. I was actually pretty surprised. I own "Amethyst Ablazed" and love every color in the palette. Every shade is super pigmented. I love the glitter shade too. I've never seen a pressed glitter until I saw this and it's pretty opaque once I applied. I wouldn't mind getting all the shades in these palettes. Well worth it for the price!