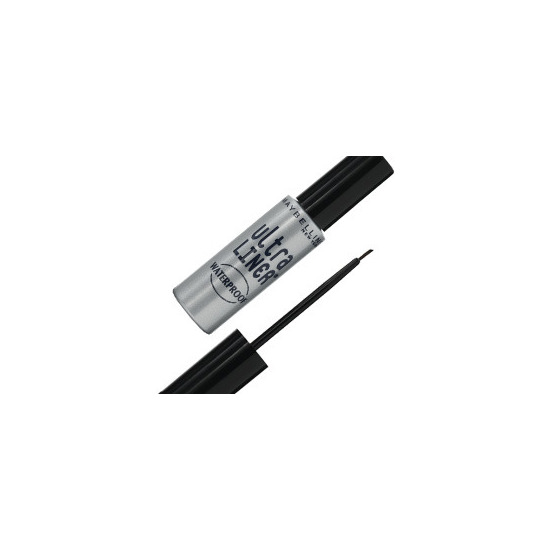 This is the only liquid eyeliner I have bought for the past three years. I LOVE IT. It's so so so easy for me to apply and with my urban decay eye primer, it stays on for however long I need it to. I've seen people don't like how it peels, but with the eye primer it doesn't. For only like six bucks, this little tube can last me ALMOST a year.

I don't like this product at all. I bought it a while ago and I was so excited about it. I used it and was automatically disappointed. It is a really thick formula and it flakes off really easy. I used it once around the house and a couple hours later I checked the mirror and I was missing a big clump of the eyeliner from my eyelid. It is really weird and I don't know what happened with this but I don't like it at all.

One of the Worst Eyeliners Ever

I have always liked Maybelline's products until this one. I do not like this eyeliner or anything about it. The only reason why I bought it was because they were out of the Maybelline Line Stiletto Liquid Liner, which is what I always get. The brush is not good with control, I mess up a lot more than I would with a sponge tip. The liquid dries into a crisp (probably because it's the waterproof ingredients, I have no idea) and when I apply to my upper lash line, I end up getting it on my eyelashes (no matter how hard I try to avoid them) and they end up clumping and sticking together ruining my whole look. It says it's waterproof, but I have never tested it for that. Don't really care to either. Never buying again! I'm only giving it a star and a half because it lasts a while. Not worth it though.

Used to buy this all the time

Then I realized it flaked, like wet flakes almost the word peeled off? accuracy is dead on, lasts a while, cute little bottle, it does burn now that I remember it. Thanks other reviews for helping me remember the pain =P

This liquid eyeliner takes entirely too long to dry. It burns badly if you get it into your eyes. After it dries it chips off during the day and you're stuck re-applying. I wouldn't suggest this product.

This eyeliner runs very easily while putting on and burns like crap when u get it in your eyes. After it finally dries it isnt very dark and flakes off in peices. The applicator brush is very difficult to use and i would not recommend for ppl without a very steady hand

I have monolids and wear contacts and this flaked as soon as I put it on, getting underneath my contacts and stinging my eyes. Although its quite black and dries fast, it doesn't work.

Warning: Do Not Buy

I have no idea why this product is still made. It flakes, the brush on the end is thin in width, but comes to a weird blunt end making any precise line impossible.

It's a waste of your money, in all honesty.

It looks fine right after you apply but flakes during the day. Very disappointing! Don't buy it unless you like wasting money. The Maybelline Lash Stiletto Liquid Liner is my favorite as of now!

This used to be the ONLY eyeliner I ever bought, but now it just seems to flake so fast! I can peel it off at the end of the day too. And the last few times i've bought it, it doesn't seem to be waterproof either.