I Tried Brain Dust for a Week—Here’s What Happened

As a freelance writer with an on-again, off-again relationship to coffee, I’ll try just about anything to help me focus when I’m working from home. I love my job, but the stress, tight deadlines, and odd working hours can cause major mental fatigue. So like any wellness-loving millennial, I turned to holistic chef and very pretty person Amanda Chantal Bacon and her brand Moon Juice for help.

Moon Juice makes a lot of adaptogenic elixirs, but the brand’s line of Moon Dusts might be its most famous offering. The finely ground blends of superfoods are intended to regulate the effects of mental and physical stress on your body, helping you to sleep better, feel happier, and maybe even have better sex. I opted to try Brain Dust for a week, which, according to Moon Juice, is a mix of “enlightening super herbs and super mushrooms” that may help “enhance focus and mental stamina, promote mental clarity, promote a positive mind and mood, and alleviate the effects of stress and tension.” 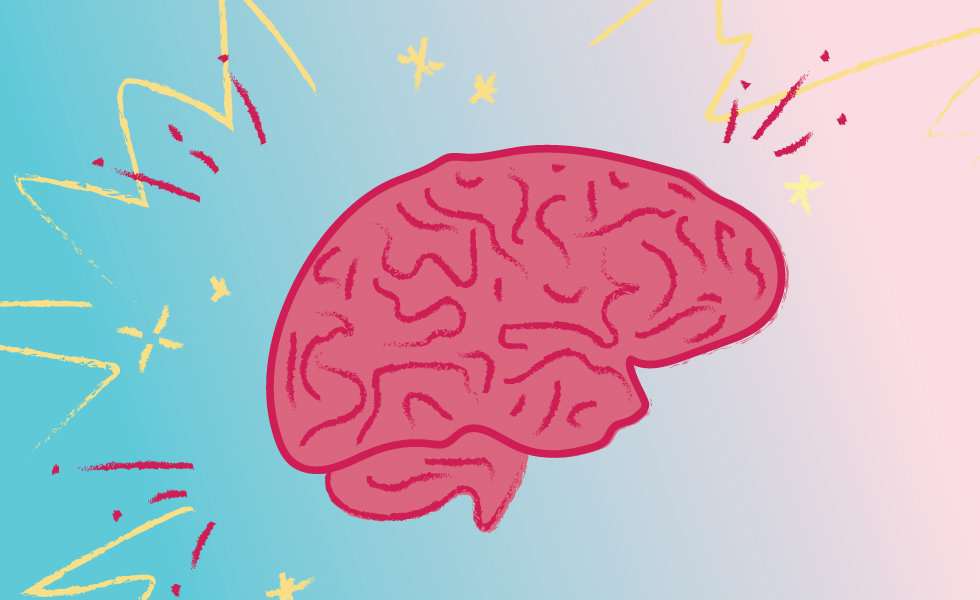 I woke up on Day 1 with a spring in my step, fully expecting to be a genius by lunchtime. I’d heard that Brain Dust had a noticeable taste, so I brewed a spicy ginger-turmeric tea to mix it into. I poured a whole sachet of Brain Dust into my tea, stirred, and sipped. The flavor was definitely noticeable—earthy, bitter and slightly sweet. It wasn’t gag-inducing, but it wasn’t exactly tasty, either.

I dumped the muddy concoction into a bigger mug, added more hot water, and forced myself to take tiny sips as I went through my email. I probably could have gotten through it, but I was up against a deadline, and panic was quickly setting in. Within about 15 minutes, I had given up and retreated to my neighborhood coffee shop for a cortado (you win again, coffee!!).

Verdict: The box says you can add Brain Dust to tea or water, but unless you like the taste of every herb in a hippie apothecary mixed together, I wouldn’t recommend it. Brain Dust: 1. Me: 0.

The next day, I was determined to actually consume Brain Dust, so I channeled my inner Amanda Chantal Bacon and made a smoothie with raw cacao powder, frozen banana, almond butter, almond milk, collagen peptides, and a sachet of Brain Dust. I could still taste the Brain Dust, but it paired nicely with the chocolatey bitterness of the cacao. 100% drinkable. Success!

Armed with my smoothie, I sat down to prepare some invoices, which is probably my least favorite thing to do in the world. Maybe it was the placebo effect, but I noticed myself feeling almost…cheerful? Usually, invoicing turns me into an irritable stress gremlin, but today I felt relaxed yet alert. I finished the invoices in record time. Was it Brain Dust at work?

Verdict: The Brain Dust smoothie seemed to help me be a less-crabby human. Things are looking up.

On Day 3, I tried the Brain Dust Iced Latte recipe on the side of the box:

My boyfriend makes an industrial-sized batch of cold brew coffee every week, so I siphoned off the requisite amount into a mason jar along with almond milk, a sprinkle of coconut sugar, a handful of ice cubes and a packet of Brain Dust. I shook the jar and took a sip. First impression: Brain Dust is naturally sweet thanks to stevia, so the coconut sugar was overkill. I also noticed that the Brain Dust never fully dissolved into the coffee, although that may have been my weak shaking skills.

I took the iced latte along with me to some meetings and was impressed at how “on top of it” I felt. The Brain Dust coffee was like an ‘80s power suit in a jar, giving me the confidence and mental agility to argue my point in a room full of male colleagues without breaking a sweat. After the meetings, one coworker told me that I was “kind of intense today,” which I decided to take as a compliment.

Verdict: I’m not a regular coffee drinker, so it could have been the effects of the caffeine, but the Brain Dust iced latte seemed to bring out my inner boss. 10/10 would drink again.

I had planned to meet up for coffee with a friend on Day 4, so I grabbed a Brain Dust sachet on my way out. At the café, I tried to casually mix the powder into my oat milk latte without attracting too many stares. Most of the Brain Dust coagulated at the bottom of my cup, but even so, I did detect a sense of focus that was a step above how coffee usually makes me feel.

The most surprising effect, however, came later in the day. I had another coffee meeting in the afternoon, so I cautiously ordered a second latte. Normally, two coffees in one day would be a recipe for a full-blown panic attack. Surprisingly, I felt energetic yet calm—no jitters, no shaking, no crushing anxiety. I chalked this effect up to Brain Dust’s adaptogenic ingredients, which are supposed to help your body resist stress.

Verdict: I didn’t turn into Anxiety Hulk after two cups of coffee today, so I consider Day 4 a success.

On Day 5, I decided to treat myself to a Brain Dust-infused chai latte. Here’s the recipe I followed:

I mixed the first four ingredients in a small saucepan on my stove over low heat, and then added the tea bag to steep. Once the tea bag had steeped for about 5 minutes, I removed it and used a milk frother (I have this one) to mix everything together. The texture of the chai was smooth and frothy, and the spices helped temper Brain Dust’s earthy flavor. This turned out to be my favorite recipe by far, and it seemed to help me stay focused and alert long past the point in the afternoon where I normally start to feel like a zombie.

Verdict: Brain Dust chai is delicious, and it may also have helped me through my usual 3pm slump.

The night before Day 6, I had prepared a chocolate chia pudding with Brain Dust. I followed my usual chia pudding recipe, which is roughly this:

I blended everything together in a blender, poured it into a mason jar, and let it sit in the refrigerator overnight. The Brain Dust flavor was barely noticeable, and unlike most breakfast choices I make (almond croissant, I’m looking at you), I didn’t feel hungry again until the early afternoon.

Verdict: Turns out you can eat Brain Dust too, and it doesn’t taste half-bad!

Day 7 was a drizzly Sunday, which I used as an excuse to stay inside all day. I started off the day with another Brain Dust chai latte, this time poured over ice. Maybe it was because the day was pretty unstressful to begin with, or maybe Brain Dust had a cumulative effect, but I felt calmer, happier and more clear-headed than I had all week.

I flew through all of my usual end-of-week chores—laundry, grocery shopping, finally cleaning my apartment, etc.—without succumbing to the Sunday scaries (i.e., that anxiety that sets in as you realize that you have to go back to work the next day).

Verdict: While Brain Dust probably didn’t make me much smarter, I think it did have an impact on my ability to concentrate and my general mood. Once you get a handle on the taste, it’s pretty easy to integrate into your routine. Brain Dust’s effect did seem to become more noticeable the more consistently I took it, so if you don’t instantly feel like a genius, don’t give up! Your smarter, savvier, more “enlightened” self might still be around the corner. 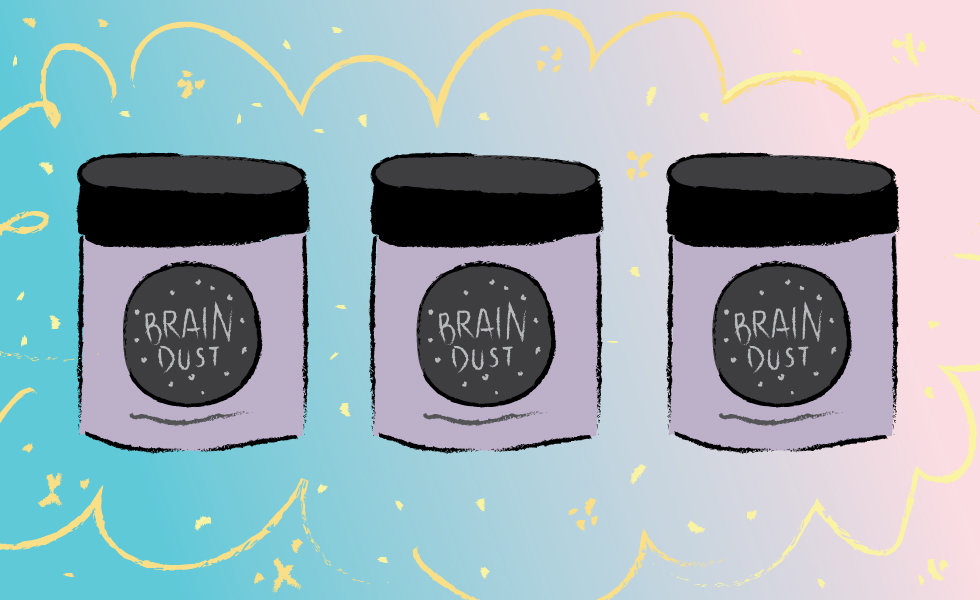