Celebrating the Fashion and Beauty of Anna Sui 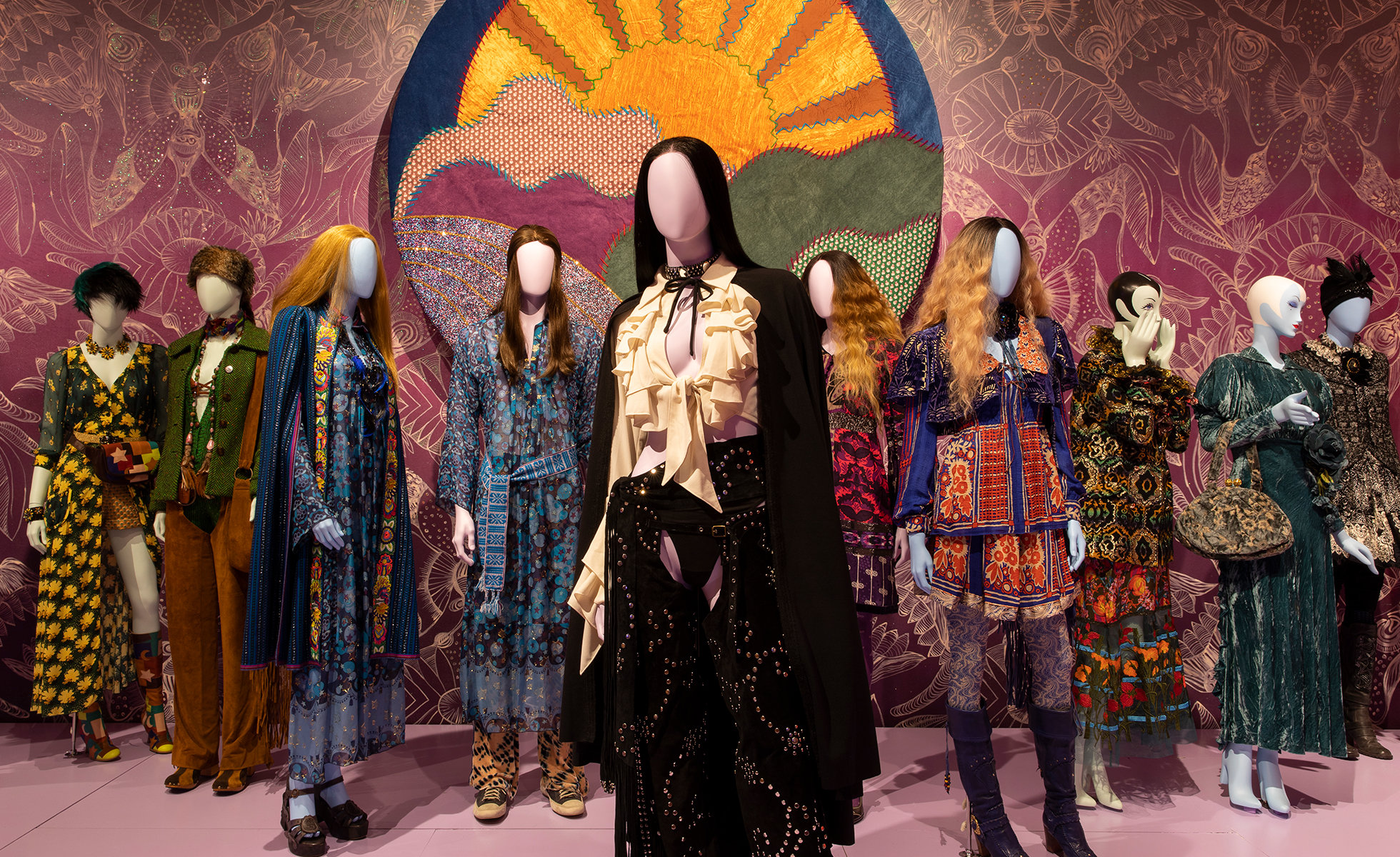 Last week, The World of Anna Sui opened up in New York City at the Museum of Art and Design.

Upon entering the huge, two floor retrospective of the legendary designer’s three decades of work, the first thing I noticed wasn’t the clothing, it was the smell — a floral, talcum powderpuff odor pervading the air. It was, according to a curator, “Fantasia”, Ms. Sui’s signature scent. A nice touch.

Since her first show in 1991, Anna Sui has been a fiercely independent NYC-based designer, harnessing the retro trend of the 90s to create a distinct voice in American fashion. Walking through the rooms, you see why this designer deserves a retrospective. Her aesthetic — the colors, the original prints, the sense of humor, the effortless bohemian cool — are all here. 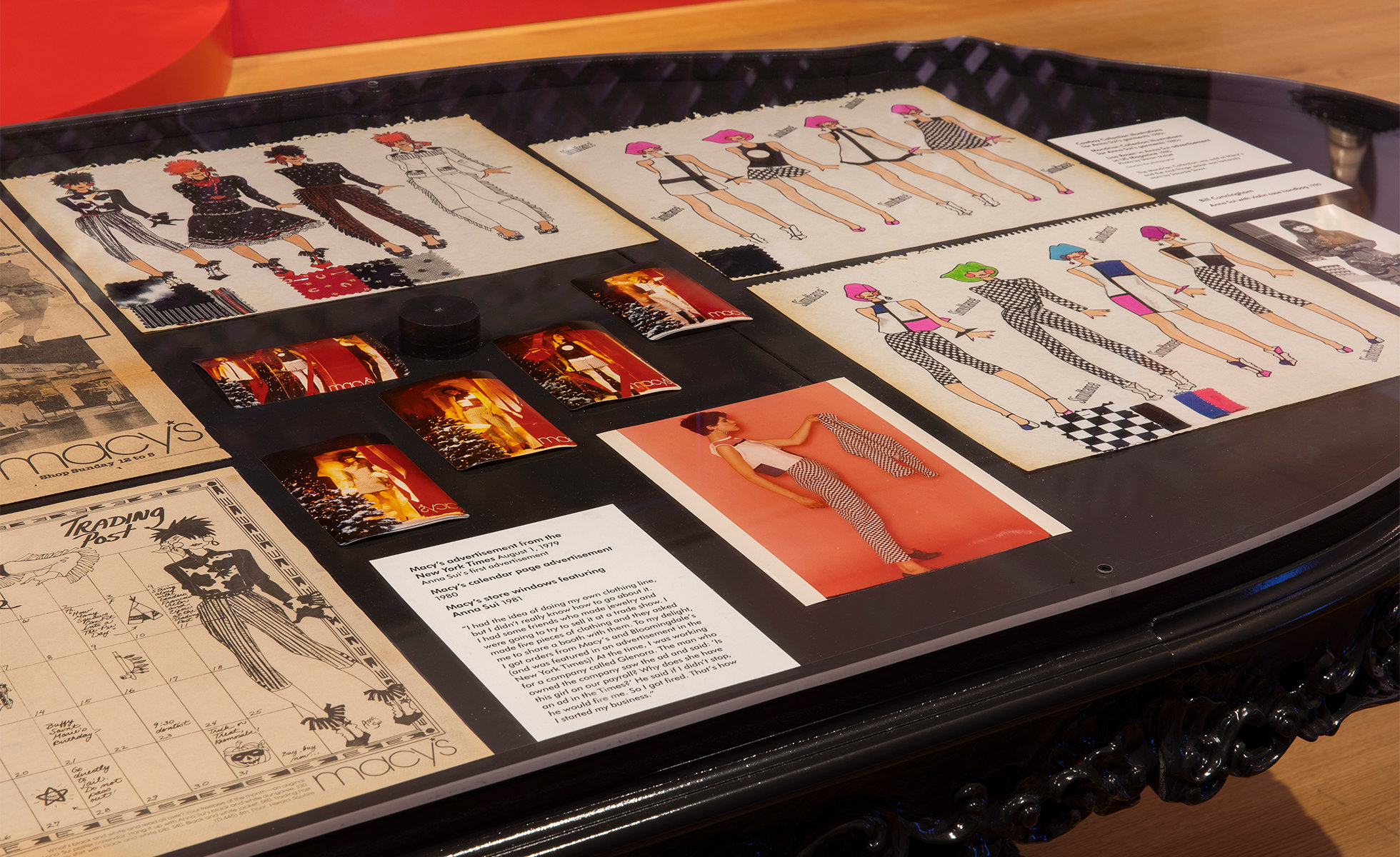 The show begins with a timeline of her beginnings. A first generation Chinese American growing up in a white suburb of Detroit in the 60s and 70s, she would go to concerts like the Stooges and Iggy Pop with her older brother in the city. She moved to New York to become a designer and attended Parsons, then was fired from her first job after her own designs were bought up by Macy’s and appeared in a New York Times ad.

Several looks from her most influential collections are presented in the exhibit, including “Fairytale”, “Nomad”, “School Girl”, “Americana”, and her first show “Carnaby Street” in 1991. Videos around the space screen her runway shows of the past, so you can catch all the supermodels who have walked for her over the years: Linda, Naomi, and one of my favorites, Kristen McMenamy. 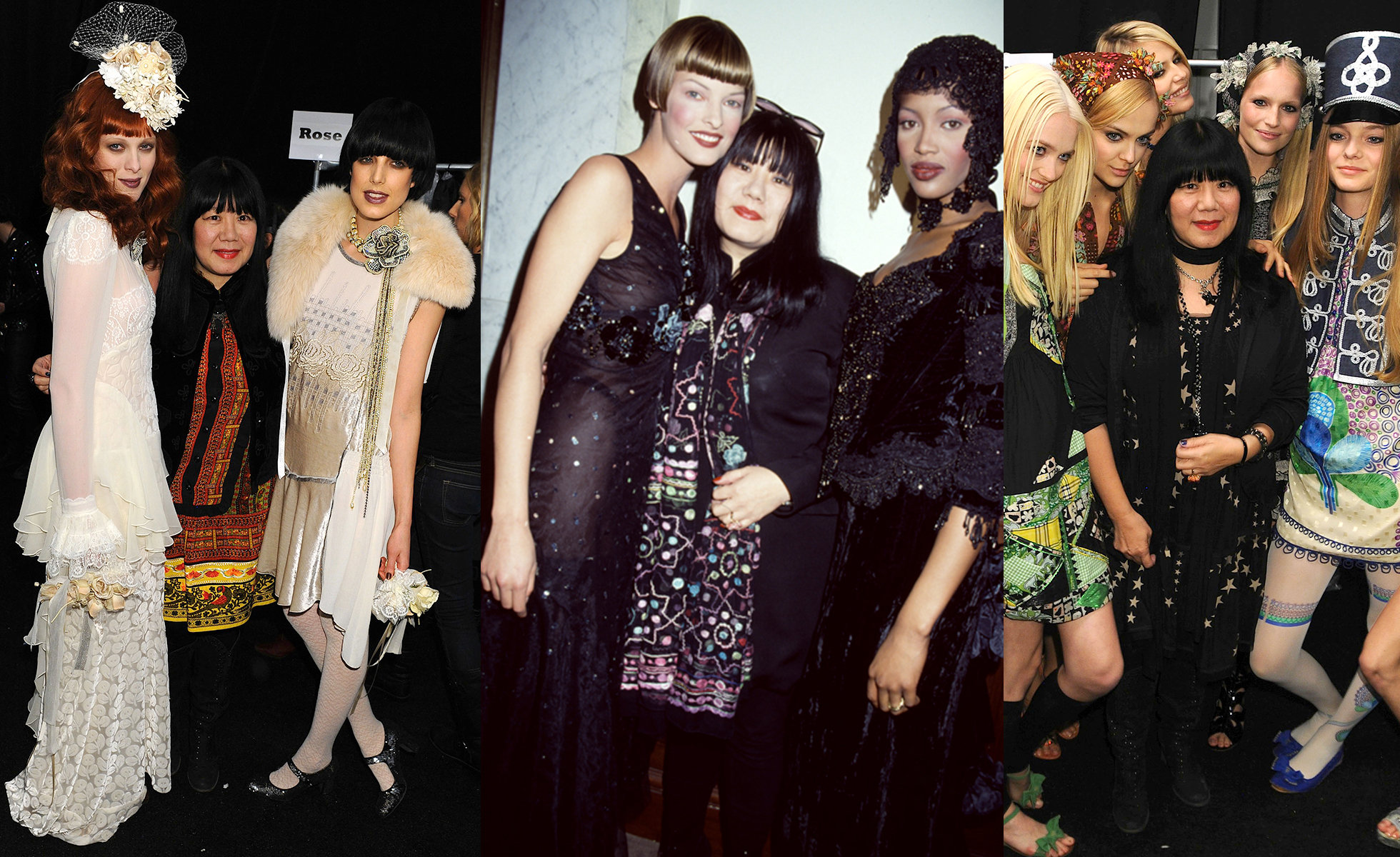 The show gives a glimpse into Sui’s creative process. Displayed are the designer’s mood boards from her recent 2019 collection, comprised of photos, fabrics, color schemes, and her own custom prints. 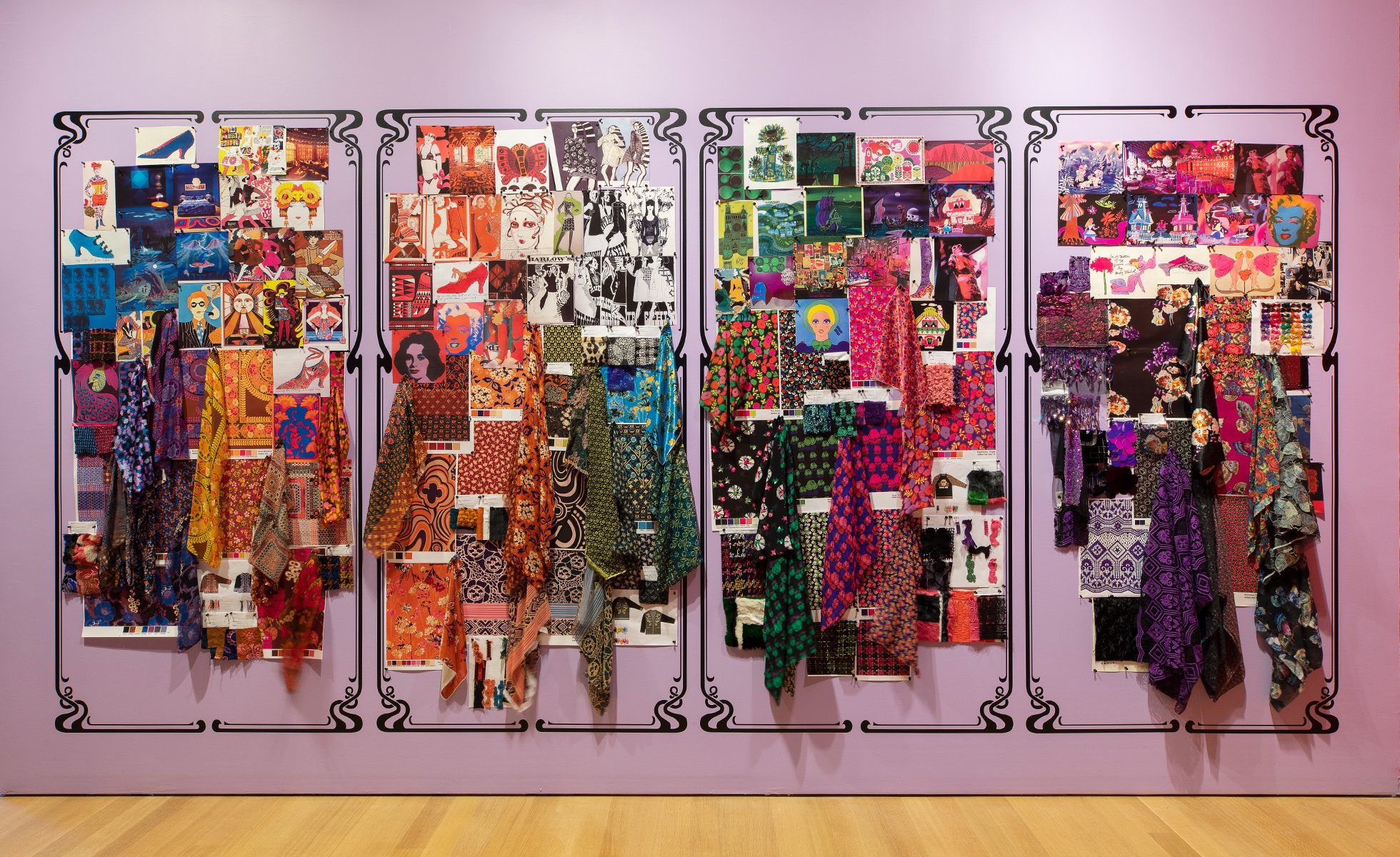 As you immerse yourself in Sui’s imaginative world, you begin to realize that for a someone whose voice is so steeped in retro, the designer was ahead of her time. 1993’s “grunge” show, for example, included androgynous dresses worn by both male and female models. Sui explained when creating that show, she was just exploring the expression of the moment — of Courtney Love and slashed babydoll dresses and rage and messy hair. 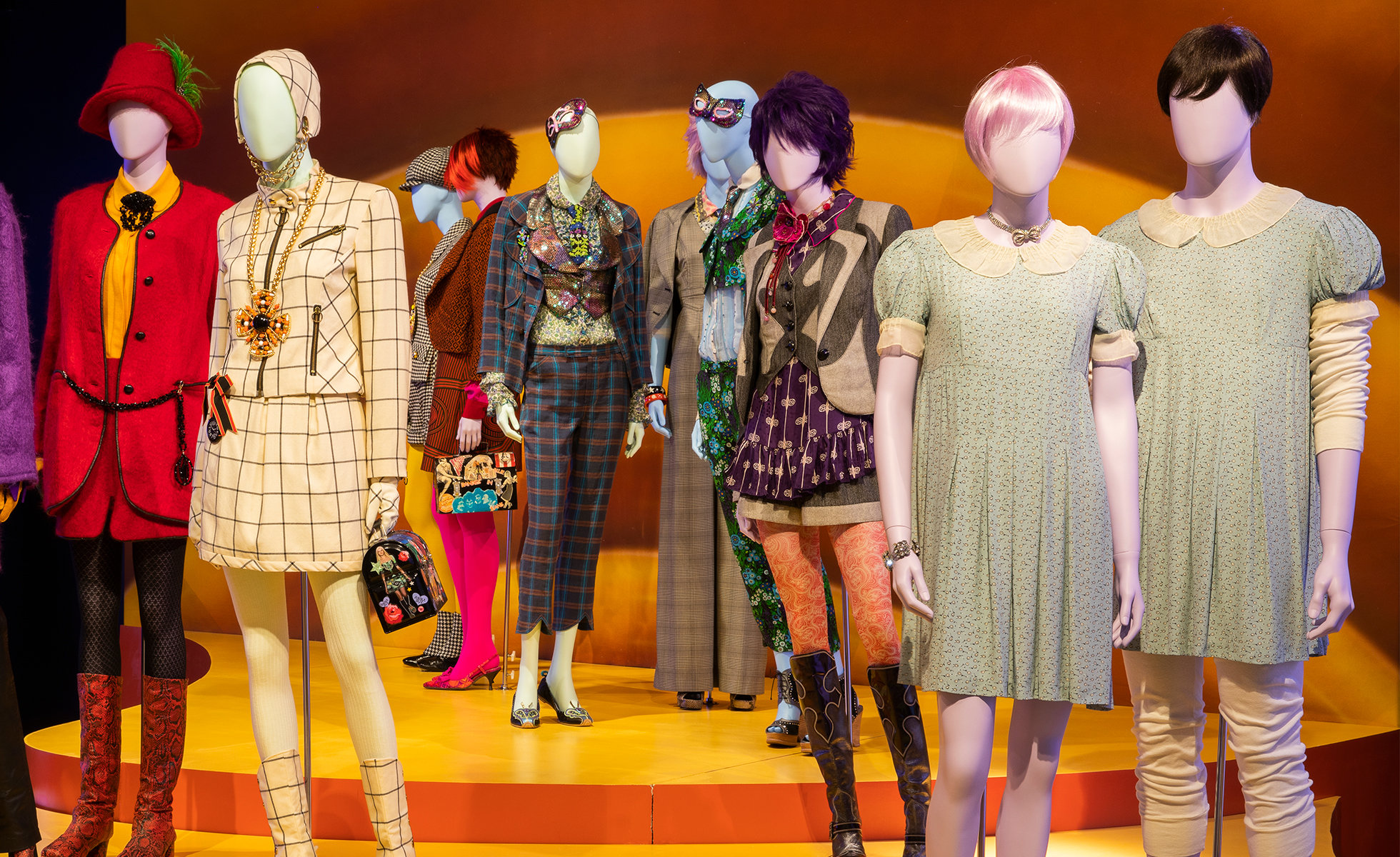 “That show in particular was more felt than thought,” Sui explained. (I was there the morning of the opening for a special press preview, and Sui, with her trademark black bangs, was walking through the exhibition, speaking confidently about her process as we reporters followed her around).

Ms. Sui remembers having a dream of paper dolls, and someone wanting to take them from her. “I am always really influenced by my dreams,” she said, “besides music.”

Music, of course, is Anna Sui’s greatest muse, and it blasts throughout the exhibit, as pervasive as Fantasia in the air. (When asked who she has been listening to recently, she mentioned The Raconteurs and neo-folk singer Jessica Pratt). 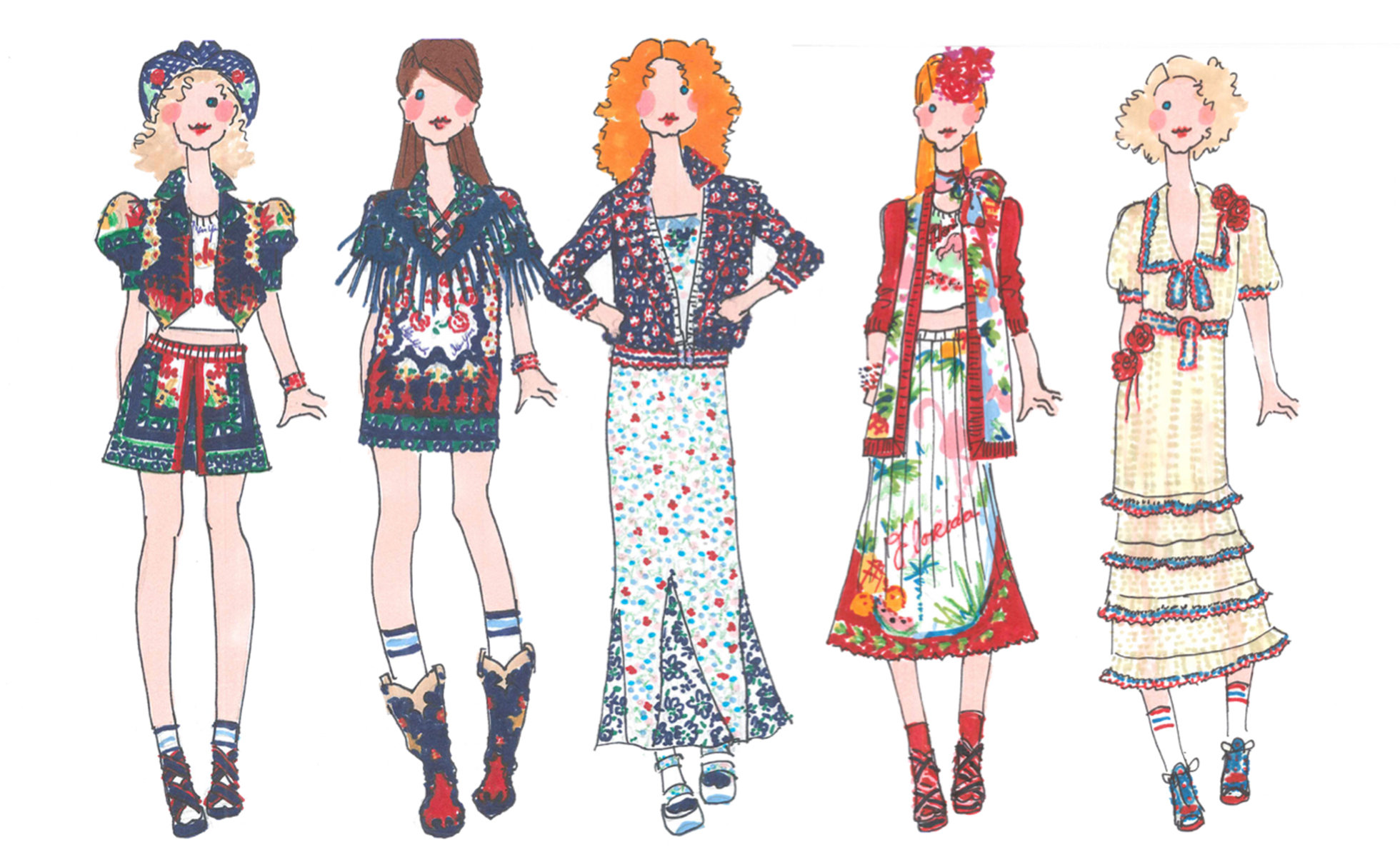 In a room dedicated to her collaborations, two large ornate cabinets present her original cosmetics — the lipsticks and compacts that, like her clothing, have become iconic in the industry. (Check out her magnificent makeup here!) An avid collector, Sui saved empty perfume bottles and makeup containers she loved over the years, and when conceiving the packaging of her own line in 1999, the goal was to create bottle and jars that were collectible.

“These designs were going against the time. Everything then was very simple and sleek. We put all my trademarks —roses, butterflies — what makes my brand unique.” 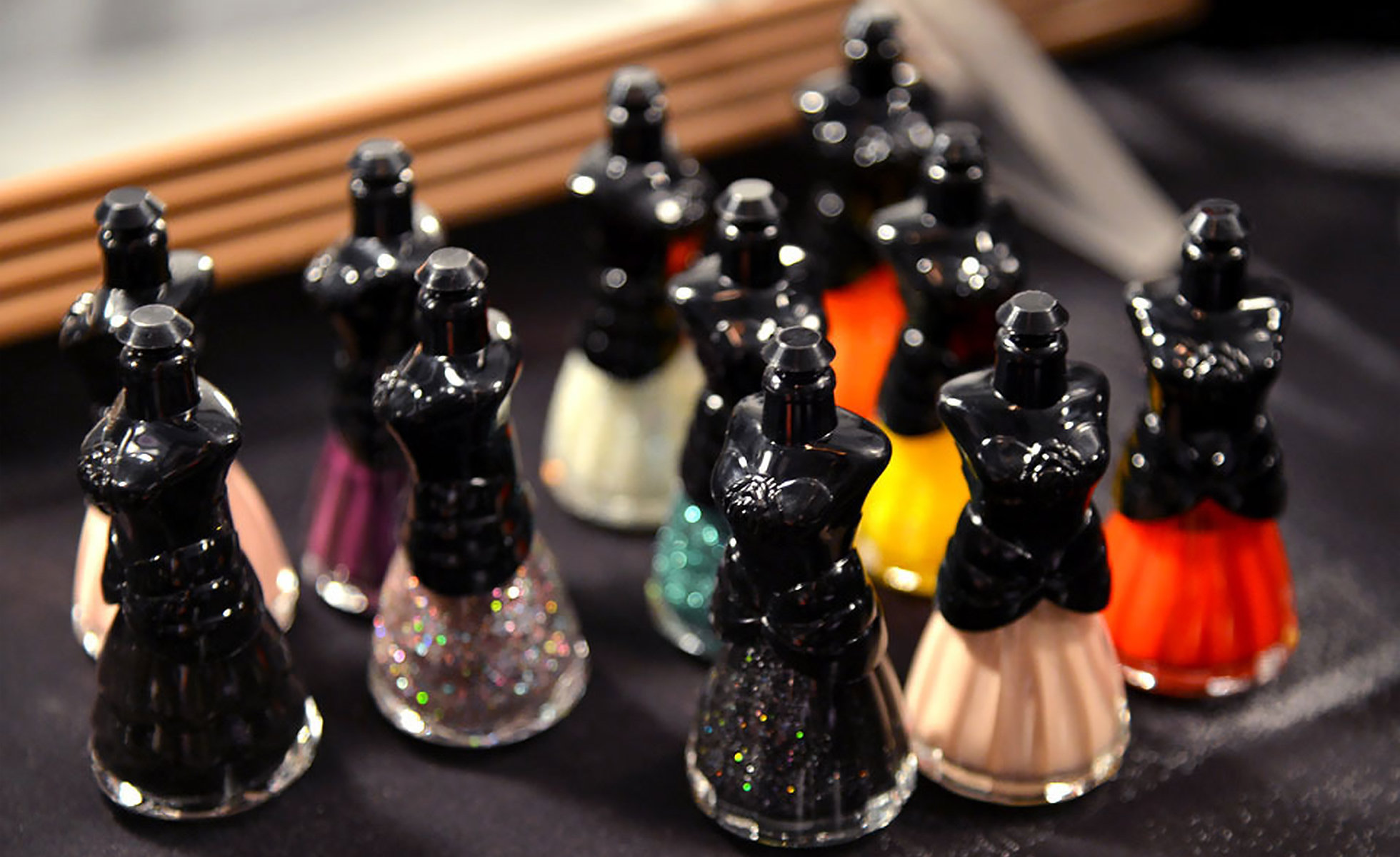 From the elegance of her nail polish bottles to the sultry strength of her backless chaps outfit from 1992 (famously worn by Naomi on the catwalk), Ms. Sui’s vision is in every detail here. Unlike some of her contemporaries, Sui has kept her company on the smaller side — you don’t see Anna Sui stores in every mall or her doing a special line for Target. “I have to express myself this way,” she said. “I tried the corporate thing, but it didn’t work. This is how it comes out.” 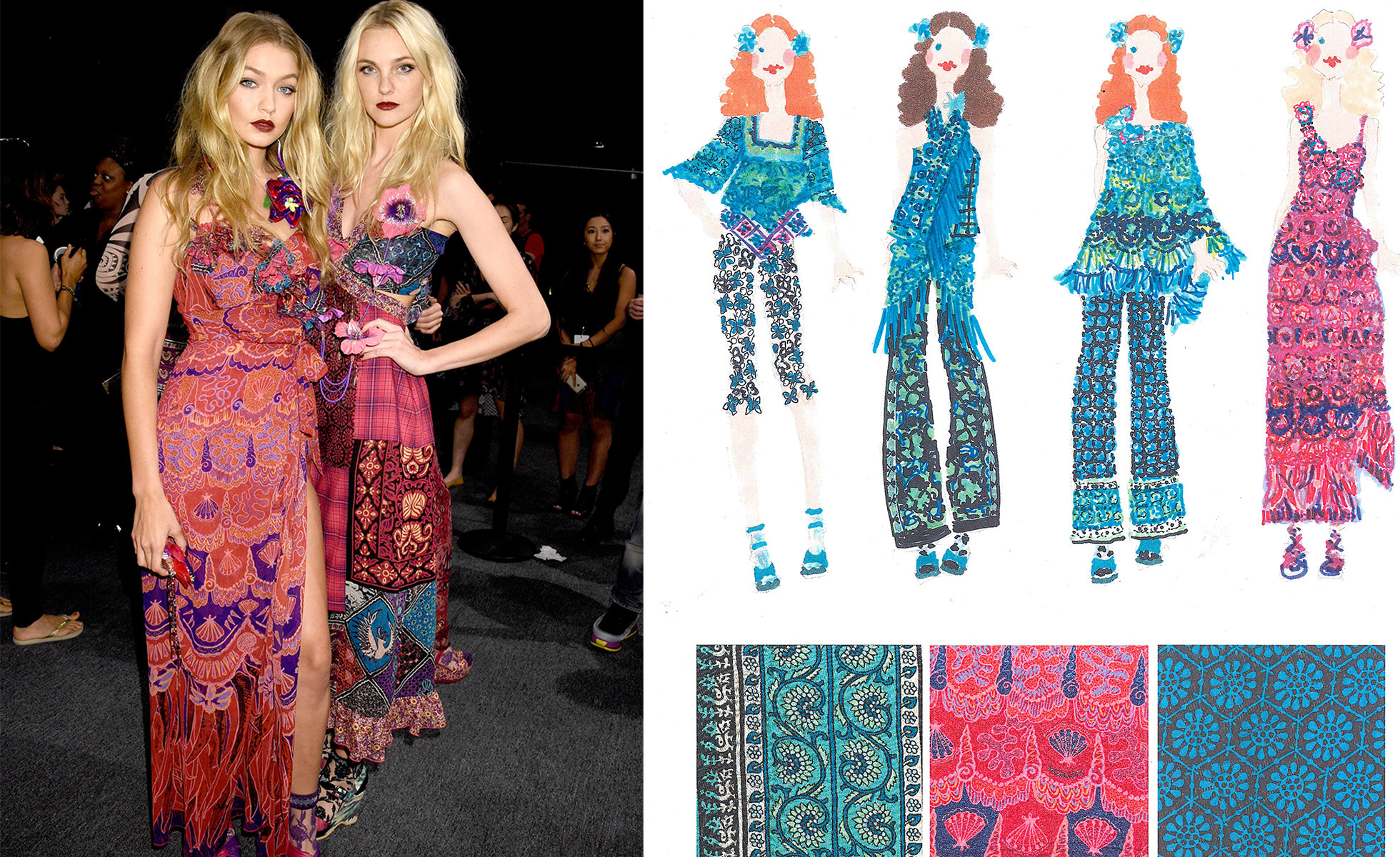 Her artistic independence rubs off on you. You walk away from the exhibition feeling encouraged to stay true to your own voice and listen to your dreams — as well as blast some great music.

The World of Anna Sui appears at The Museum of Art and Design in New York City until February 23, 2020. 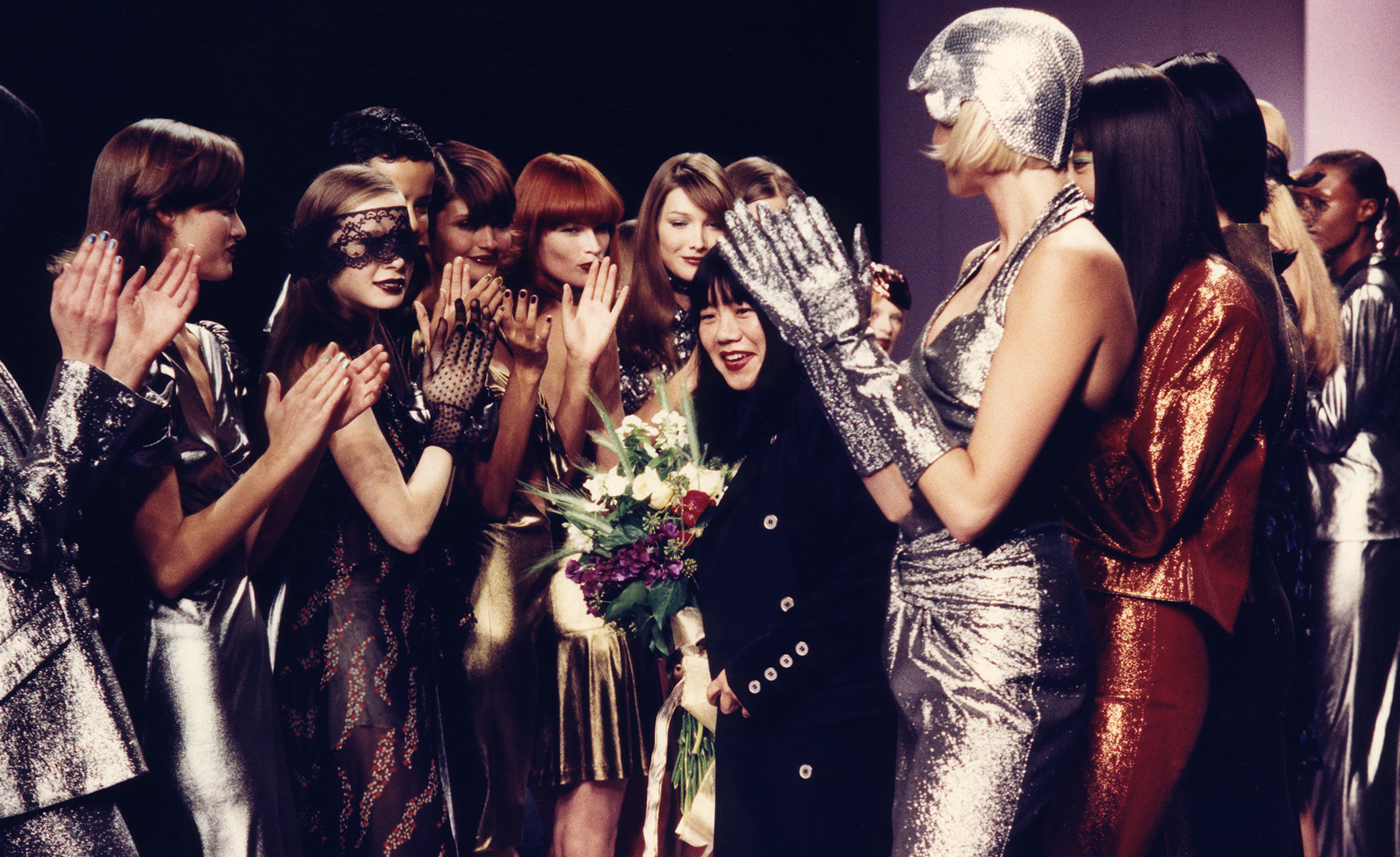 New to the world of Anna Sui? Try these!

Powder Blush, $31
Silky pinks, roses and tans to give your face the perfect flush of color.

Beauty Box, $35
A charming box containing a mirror and room for your makeup treasures.