Nothing says romance like making a homemade dessert for your loved one. But these aren’t just any desserts I’m talking about. These sweet nothings are made with pure homemade aphrodisiacs, are simple to prepare, packed with healthier-than-usual ingredients, and are therefore easier on the waistline. Now you might be thinking that there’s no such thing as “healthy dessert”. But with the help of two chefs, Vanessa Vanya, holistic health coach and nutritionist and Basile Bouhadida, pastry chef at Fred Segal Mauro Café in Los Angeles, I’ve proved it’s possible. Each came up with one dessert that fit within my criteria: easy, delicious, and healthier than most.

Vanessa decided to tackle panna cotta, which she describes as an adventure in texture, flavor, and all of the senses. “Panna cotta involves ingredients many people may haven’t experimented with before, like vanilla beans and cacao nibs, both of which happen to be some of nature’s most powerful aphrodisiacs,” she explains. Cacao in particular can elevate your mood by increasing serotonin production, partly because of an ingredient called theobromine. In addition, theobromine also acts as a natural energy-lifter. And according to Vanessa, the best part is making the citrus topping, which involves using kumquats and de-seeding pomegranates.

Traditionally, panna cotta is made with tons of heavy cream and refined white sugar; here, Vanessa swapped them for 2% milk, greek yogurt, and turbinado sugar. (Turbinado is much less processed and has fewer calories than white sugar, but Vanessa notes that you should always use sugar in moderation.) Greek yogurt is the perfect substitute for cream: it has far less fat and sugar, is low in sodium and carbs, and has double the protein of regular yogurt and probiotics, which help keep the stomach healthy.

Basile kept things extremely simple with his take on chocolate mousse. It’s incredibly easy to make, so much so that it’s kinda too good to be true. Dark chocolate, which is loaded with antioxidants, takes center stage—and it’s known to help elevate mood, increase blood flow, and regulate blood sugar levels. Basile also opted for egg whites in place of full eggs. That means you still get the protein, but no fat, and way fewer calories (one egg has about 78 calories, while one egg white has roughly 17!).

Convinced yet? Well, of course not. Just wait until you take a bite! 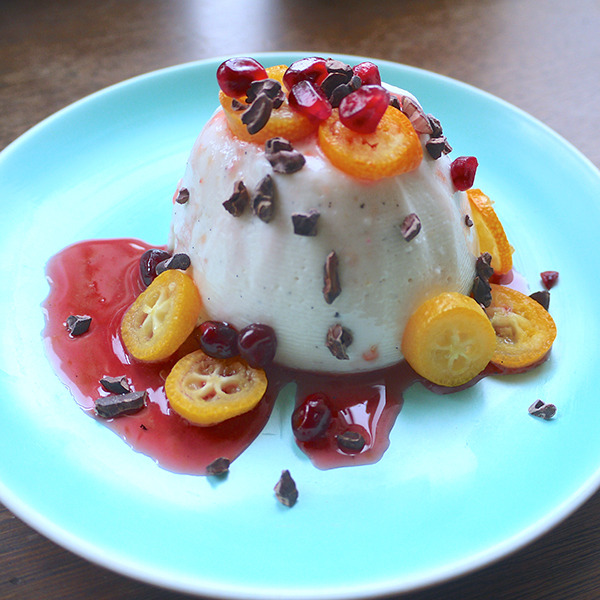 for the panna cotta:

Pour 3/4 cup milk into a medium size bowl and pour the gelatin packet on top. Let it sit for 15 minutes until it’s wrinkly and firm on top. Pour the rest of the milk into a saucepan and simmer on low/medium. Split the vanilla bean in half and use a spoon to scrape the seeds and pour into the milk. Add the sugar to the milk and whisk together until dissolved and mixture is simmering again. Remove from heat, and add the gelatin and milk mixture and whisk to dissolve. Let sit until cool. Add mixture to a large bowl, mix in the yogurt, and whisk until everything is smooth and thick. Lightly oil up 4 to 6 small bowls or cups (depends on how big you want your servings) with coconut oil. Pour mixture into each container and refrigerate for 2 to 4 hours.

Put the blood orange juice and honey in saucepan and heat on low. Simmer until the consistency becomes syrupy. Once the panna cottas have been chilled for at least 2 hours, plate them. Use a knife to loosen the edges, flip over, and lightly tap the bottom of the bowl over a plate. Drizzle with honey blood orange sauce and top with pomegranate seeds, kumquat slices, and cacao nibs. 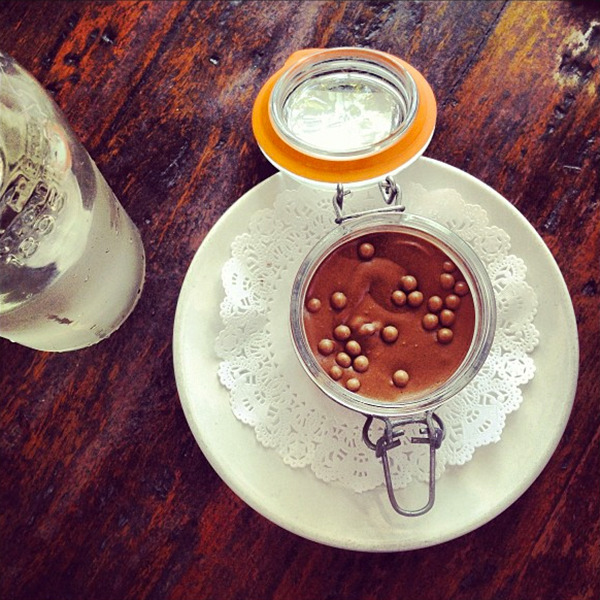 Melt chocolate in a saucepan over low heat, mixing occasionally until fully melted. Remove from heat and let cool. In the bowl of a standard mixer, whisk the egg whites on medium-high speed, until stiff peaks form. Mixture should be thick and smooth. Fold the chocolate on top of the egg whites, mix together, and refrigerate for 2 hours.

Kit Rich is Los Angeles-based fitness trainer with endless exercise and nutritional know-how. Hollywood’s hottest stars are addicted to Kit’s unique, multi-disciplined approach that combines cardio, yoga, Pilates, and weight training. Kit’s clients are immediately taken by her funny and honest approach to health and fitness. She treats her clients as she treats herself, “with a hard challenge, sensibility, sensitively, and a good laugh.” Follow Kit on Twitter @kitrichfitness.