Best Of The Best from the Paris Couture Shows

When it comes to seeing the most influential fashion of the season at its most grandiose, you can’t get any more on point than a couture show in Paris. That goes for the makeup looks that accompany the clothing, as well. And yet, so far this season, the styling has been more off-kilter than we could have anticipated. Wild? Yes. Out there? Of course! Fabulous? Always. But this season, it also looks like the unifying theme is: there is no unifying theme. From granny hair to bejewelled lips, the French designers are bringing us a little bit of everything. Take a look at some of our favorite beauty moments below. 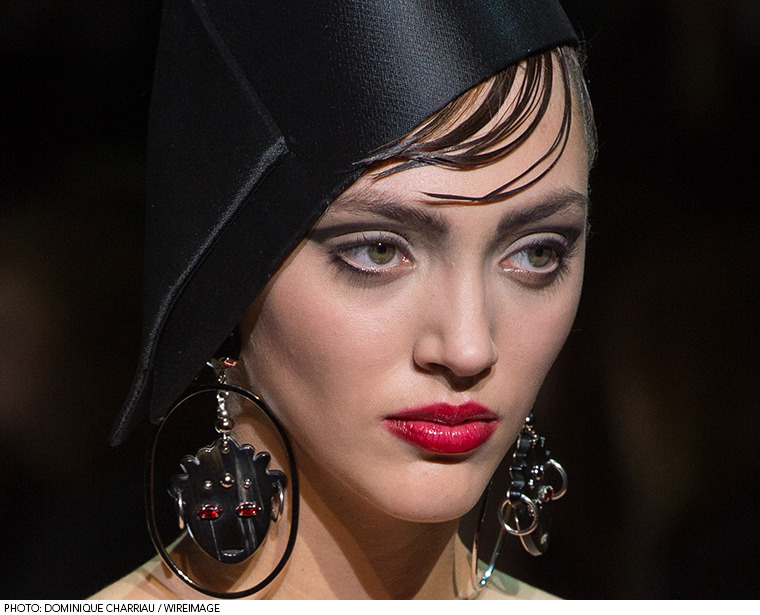 The cat eye is seemingly here to stay (or maybe simply had an upgrade) as models donned elaborate and exaggerated versions. The Armani Privé show featured a double liner look that felt both retro and modern and reminded us of a clipped wing. At Atelier Versace, neon green liner strips were applied over a smoky black shadow for a pop of color visible from even the back row. Avant Garde designer Charlie Le Mindu, however, took an even more over-the-top approach with winged white and black eye makeup to match the headpieces that accompanied nearly every garment. They looked ready to fly away. 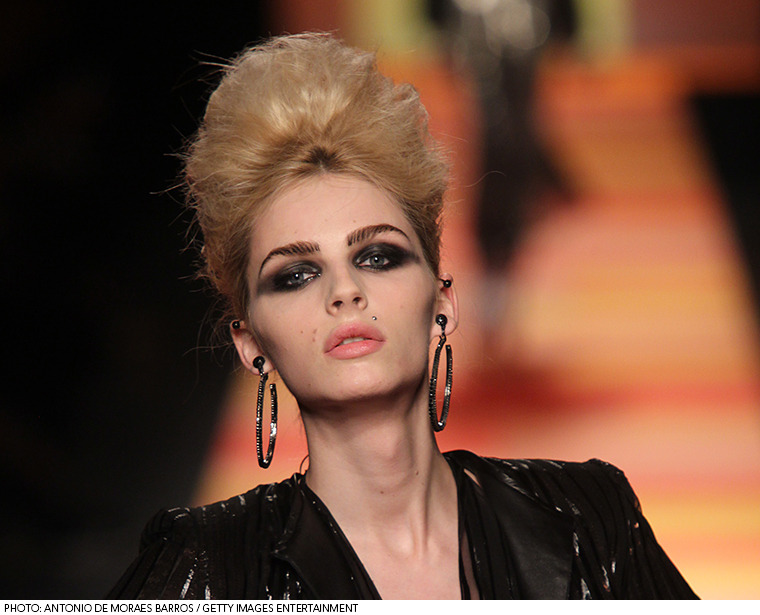 Gaultier can’t seem to get enough of the beehive hairdo. Last year, he sent a horde of rainbow colored bouffant 'dos down the runway. This year his looks took a sophisticated turn with a center part. It fancied up the dome-like hair just enough to keep it classy. On the flip side, Ulyana Sergeenko took us on a trip to Spain with down-brushed center parts that wove into chignons in the back. We loved the essential pairing of the style with an array of oversize black brimmed hats. Olé! 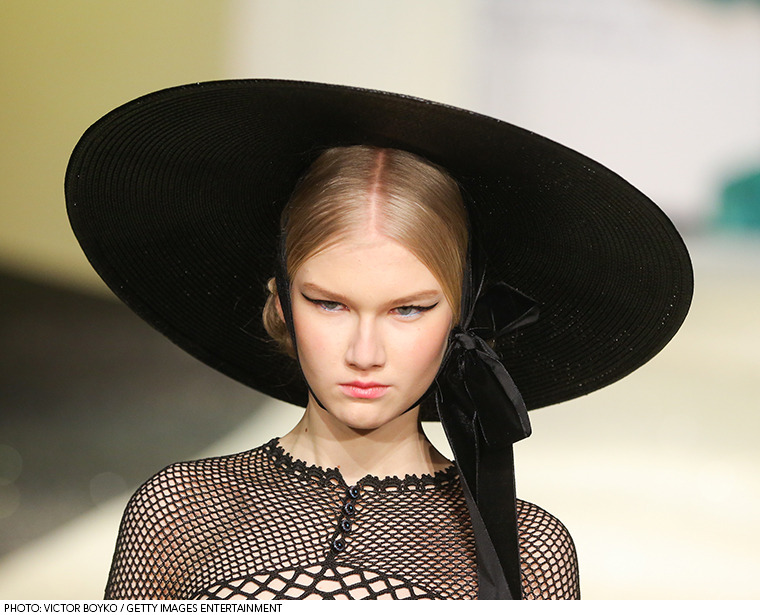 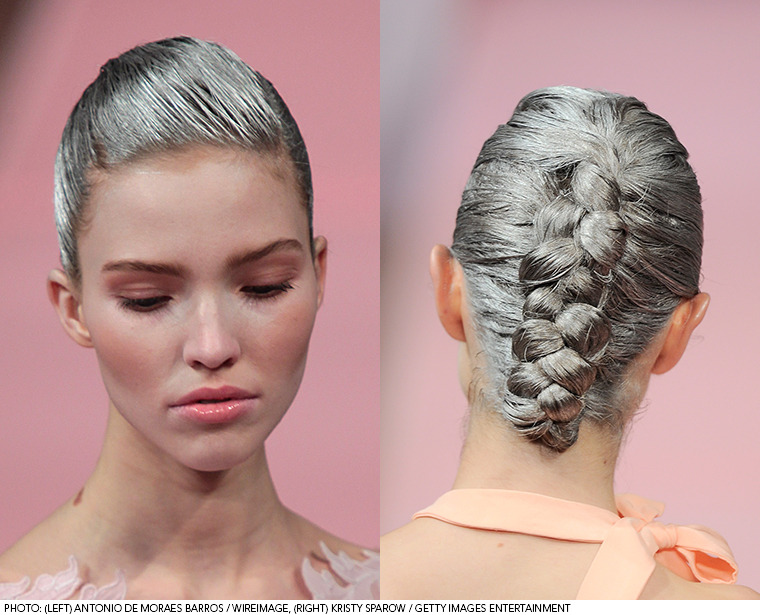 Designer Alexis Mabille has a track record of wacky runway hair and this season was no different. Actually, compared to the previous few seasons it was a bit toned down. Models floated down the runway sporting silvery metallic locks wound into tight braided updos in the back. The look was demure and even a wee bit androgynous. Above all, it was age defying. 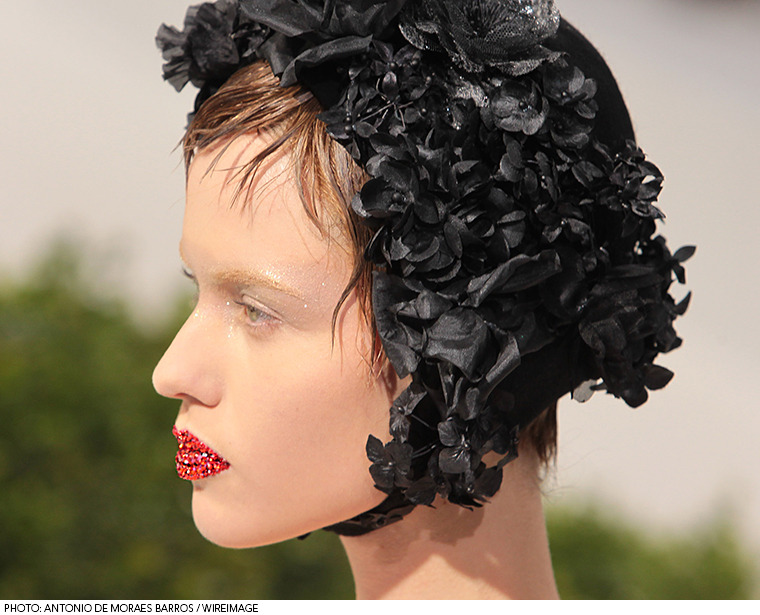 From afar we couldn’t tell what was so special about Christian Dior’s couture makeup until the lights hit and then — POW! — we saw a bedazzled pout that we’ve been obsessing over ever since. Red crystal rhinestones were applied individually to the lips, and delivered non-stop sparkle throughout the entire show. Similarly, the smoky, messy eyes at Chanel looked mysterious against a forest of a runway designed for the show. Yes, Lagerfeld seriously flew a forest into Paris. Tree by tree. I guess if you're Karl Lagerfeld you can do those kinds of things. Upon closer inspection, the eye look on the models was actually created by applying tiny shredded strips of black tulle fabric along the lash lines. It looked whimsical and reminded us of branch-like shadows. Wearable? Maybe not, but the glue-on crafty creations sure were pretty to look at. 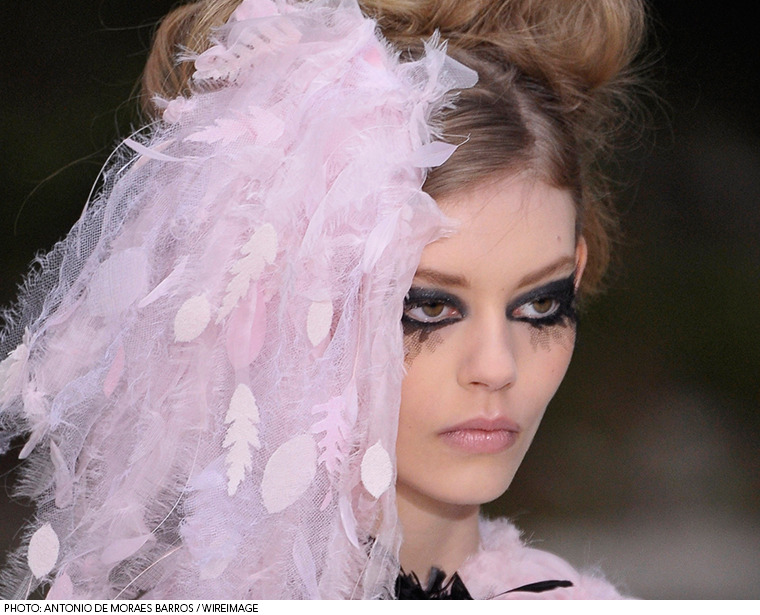