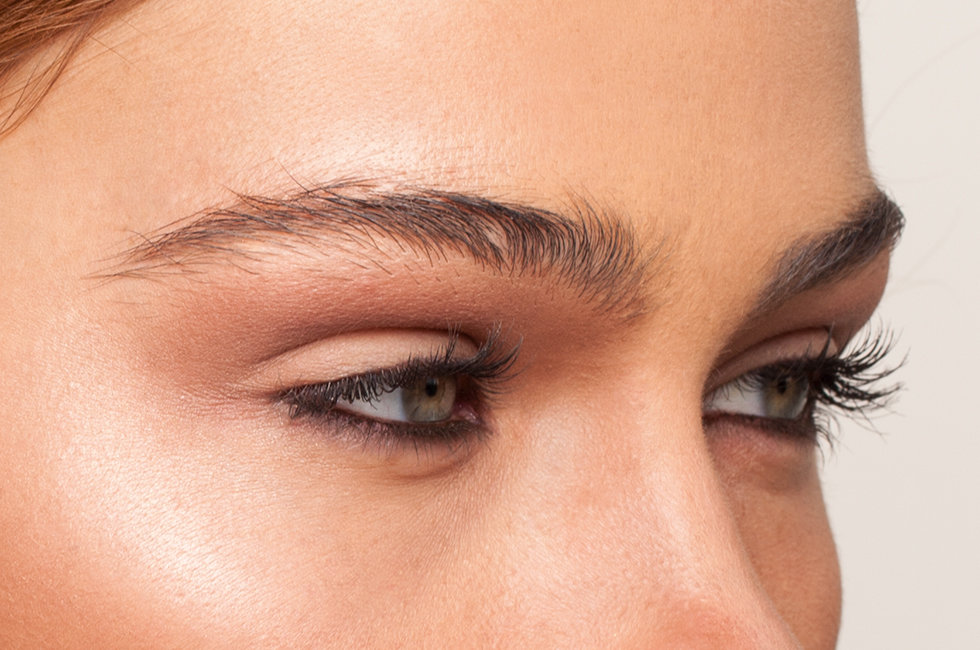 All my life, I’ve had crazy, fast-growing, unruly grandpa-type eyebrows. They were long, they covered more of my face than the magazines said they should, and they were an object of obsession for me. I waxed, I plucked, and I plucked some more. And then, about a year ago, I noticed something. I didn’t really need to pluck certain parts of my brows. Because hair simply didn’t grow there anymore. Is brow-hair loss a thing that could happen? After poking around online, it appears to be a common phenomenon—people claiming that, due to over-plucking and such, their brows weren’t growing back in as fully as they’d like. The new hairs coming in were wispy, thin, or, in worst-case scenarios, not there at all.

I realized if I’d spent a couple years plucking my way to exaggerated arches or repeatedly waxing that I could be in trouble. And, I wondered, could brows just start thinning or falling out on their own, naturally, due to normal aging? Perhaps. But there’s such a thing as an eyebrow transplant. Yes. People with thinning or non-existent eyebrows can get essentially the same procedure as a transplant that’s performed on the head! And even though it sounds almost space-age, eyebrow transplants are nothing new. Dr. Adam Scheiner, a noted laser eyelid and facial cosmetic surgeon in Florida explains, “Brow transplants were first done many years ago for reconstructive reasons, on patients who lost brow hairs from injury or illness.” In the years since, the procedure has started to evolve into a more cosmetic one. Dr. Scheiner gave me the whole scoop.

What is an eyebrow transplant?

Basically, a brow transplant is a specialized form of that much more well-known procedure, a (head) hair transplant. “With age,” explains Dr. Scheiner, “people can lose their normal brow hairs. And it can also happen because of tweezing, waxing, threading, genetics, thyroid, trauma, and laser hair removal.” So apparently what I feared is correct: for some people, it’s possible to pluck your way into permanent browlessness! WHOA. But, apparently a transplant can give you more natural-looking results, versus already well-known options like filling in your arches every day with pencil, or even getting them tattooed to appear fuller.

As with a regular hair transplant, a surgeon will get hairs to be placed into the brow area from a “donor area.”  Scalp hairs are often the best choice because of how regularly they grow; the back of the head is especially prime because the hairs there are less likely to go gray. Hairs from the chest and legs can work too, as they grow more slowly and require less-frequent trimming than those from the scalp. “After numbing the donor area, the surgeon removes a small strip of skin (approximately 2 mm by 5 cm), and then sews the area back together. And then she or he will carefully dissect the donor strip into multiple pieces with one to two hairs per transplant graft,” explains Dr. Scheiner.

Next, the surgeon will numb the brow area, and cut openings with a tiny blade and place the transplanted hair units into them. “The directions of these openings are important because different sections of the brow grow in different directions,” Dr. Scheiner says. When it’s all done, you can’t get your eyebrows wet for five days. Transplanted hairs start to grow in naturally, like the place on the body from which they came (I say be science magic!) in four to six months. Just like regular hair, they’ll need a trim every few weeks. “Usually 80 percent of hairs will survive the entire procedure,”  Dr. Scheiner says.

And no more overzealous plucking if you’ve had this done, folks! “Continued plucking of newly transplanted hairs could damage them and prevent growth in the future,” he explains.

Does it look natural?

Do eyebrow transplants ever look...fake? I had to wonder, picturing badly done hair plugs. According to Dr. Scheiner, not really: “It’s hard to tell who has them. However, if they aren’t placed naturally (i.e. in the same direction as natural hair growth) or trimmed regularly, they’ll look bushy and less believable.”

Who’s a candidate for this procedure?

Apparently anybody! “Any person who’s unhappy with the appearance of their eyebrows, whether sparseness stems from genetics, aging, injury, or anything else,” says Dr. Scheiner. That’s a lot of people, I’m guessing. And if you think the current trend for thicker, fuller brows is also a factor in who might want to have this done—you’re right! Dr. Scheiner says that, since media attention around celebrities with full brows has picked up over the last few years, he’s seen an increasing number of patients asking for this procedure.

How much and how long to recover?

A brow transplant will run you from around $4,000 to $8,000, depending on the complexity of the particular case. And it’s an outpatient procedure. “The recovery is easy, but the hairs need to be protected during the first few days. You have to keep them dry and refrain from removing the normal healing crusts that form around transplanted hairs,” explains Dr. Scheiner.

Well, I’m floored. FLOORED. I had no idea this procedure even existed. And while I very much hope that brow hair loss doesn’t happen to me, I know that, if it does, I can visit Dr. Scheiner, and explain that I want eyebrows just like Nadia Aboulhosn’s, and refuse to go away until he says yes.