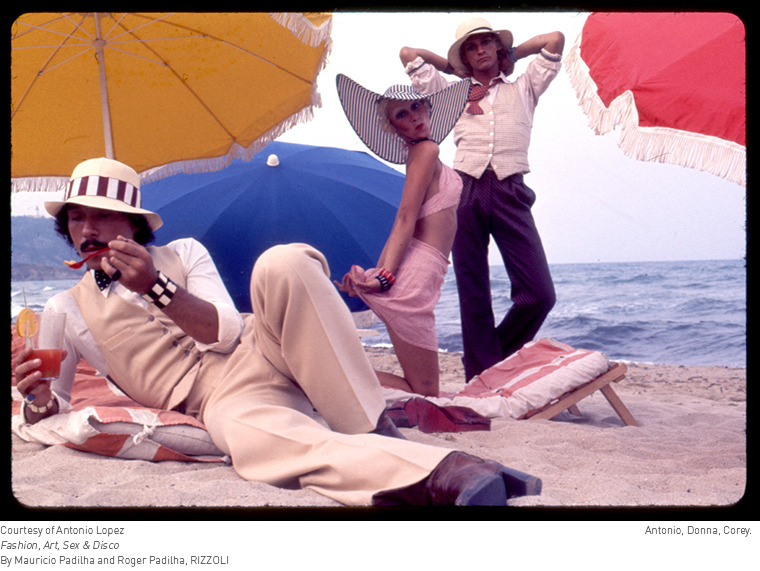 The ’70s, in Paris. A wild new high fashion scene of models and artists are moving in from New York and taking the city by storm. Corey Grant Tippin was there, an artist and muse working with one of fashion’s most important and enduring illustrators of the era, Antonio Lopez.

Working out of New York and Paris amid a collective of fellow creatives (including Warhol and several of his fashion-minded Superstars), Lopez changed the face of beauty and fashion by creating images both on paper and on film for countless major fashion magazines and designers, as well as for his own personal artistic exploration. Lopez’s fashion illustrations and photographs trace the wilder side of beauty culture from the 1960s to the 1980s, and have withstood the test of time. Alongside other fashion illustrators like Cecil Beaton and René Gruau, Lopez work has achieved canonical status, his works standing as icons of fashion-as-art. 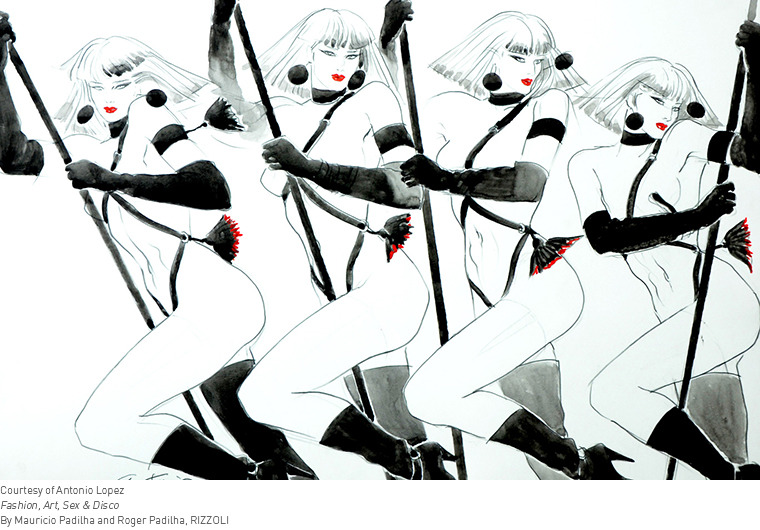 “Antonio is the one who told me I ought to become a professional makeup artist,” says Corey Grant Tippin, Lopez’s longtime model and the man behind the makeup looks in many of his illustrations and photos through the late ’60s and ’70s. Meeting Lopez while studying at Parsons, Tippin was whisked away to a life of luxury and artistic decadence with Lopez and his partner, Juan. Tippin found himself living the dream in Paris surrounded by Lopez’s infamous muses, including Donna Jordan, Jane Forth, and MAC campaign star Pat Cleveland, and without much experience, began working as Lopez’s makeup artist, creating inspired looks for Lopez to illustrate and photograph. 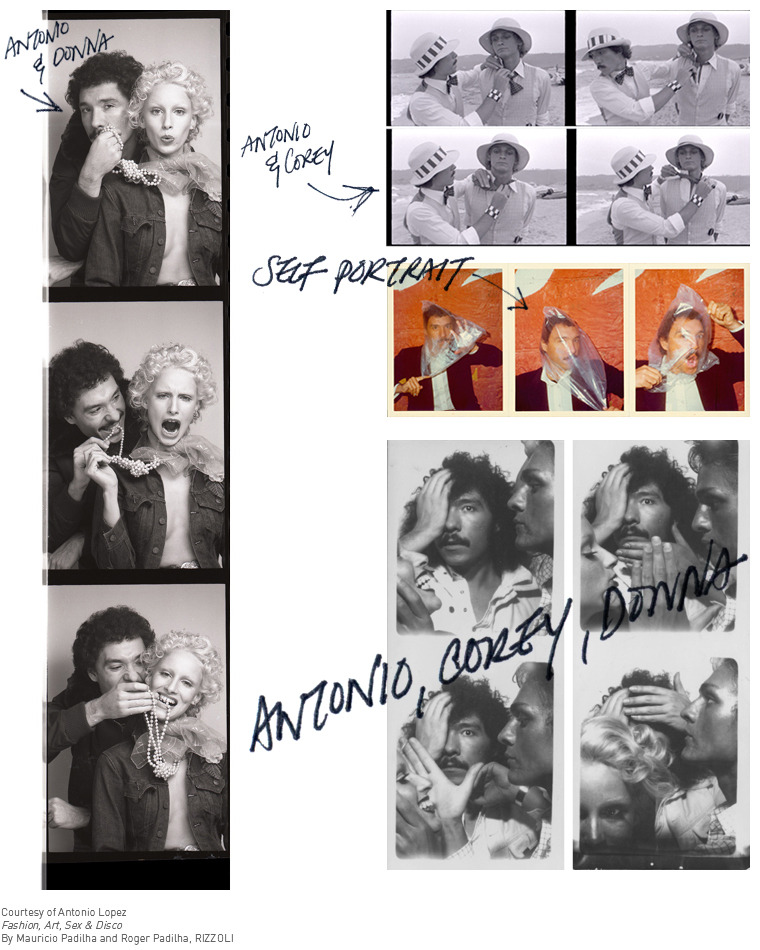 Little did Tippin know that, through Lopez’s work, his cosmetic experimentation would become such a sensation. Working with what few products he had, Tippin created unforgettable looks on Donna and Jane, as well as legendary stars like Grace Jones and Jerry Hall (Tippin himself also often modeled for the work.) Lopez passed away in 1987, leaving his legacy to be carried on by Tippin and his other creative partners. Now, 26 years after Lopez’s passing, MAC, with Tippin’s help, has released a tribute collection devoted to Lopez’s work:  a collection of eye shadows, lipsticks, cheek colors, and accessories inspired by the illustrations. It’s clear that the late, great artist is still making an impact on beauty influencers. 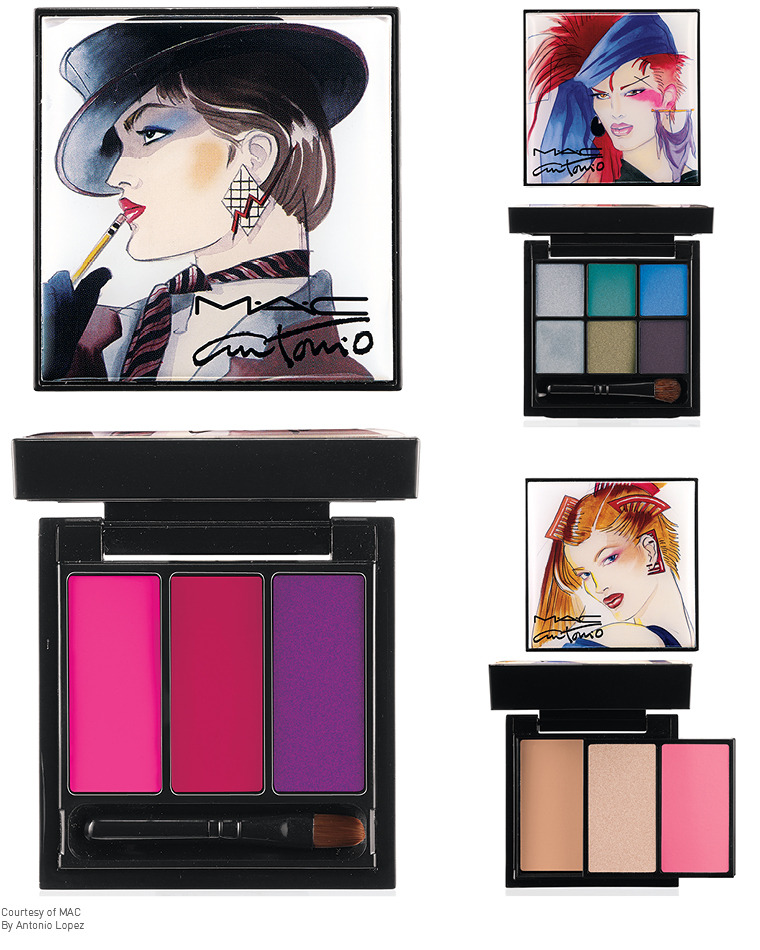 There’s so much more history to this collection than MAC fans might guess, and we’re thrilled to have been able to sit down with Antonio Lopez’s muse and beauty stylist Corey Grant Tippin to get an uncensored look at life with Lopez and the unforgettable personalities that surrounded them.

You were involved in quite a wonderful and hedonistic world of art and fashion with Antonio. What was that like?

In [the book about fashion in the era] The Beautiful Fall, the author [Alicia Drake] describes Paris in the ’70s perfectly in that it oscillated between utter euphoria and complete depression and desperation. We were driven by a constant anxiety of not being beautiful or desirable enough. We had such a freedom in youth and a sort of unbridled and uncensored creativity that allowed our opinions, demeanor, and observations to be taken completely seriously. Youth sprouts wisdom and ideas, and we were bent on becoming stars. At the same time we took a lot of abuse for it. If you have a look or a way of thinking that’s a little bit extraordinary, you have to be prepared for the consequences.

Did any of you enter Antonio’s world with a goal in mind?

A goal beside being famous? I mean, that was pretty much it! Some of the girls wanted to make money through modeling or acting, and looked at it more as a business, but I never thought about it like that. Antonio and Juan were certainly business-minded in the sense that they had deadlines to produce spreads for magazines or projects for department stores, and they knew there would always be money at the end of those jobs. Because we were part of Antonio’s entourage, we really never saw money. We were always taken care of, living in nice hotels and eating well, thanks not only to Antonio, but to Warhol, and then our friend Karl Lagerfeld in Paris. 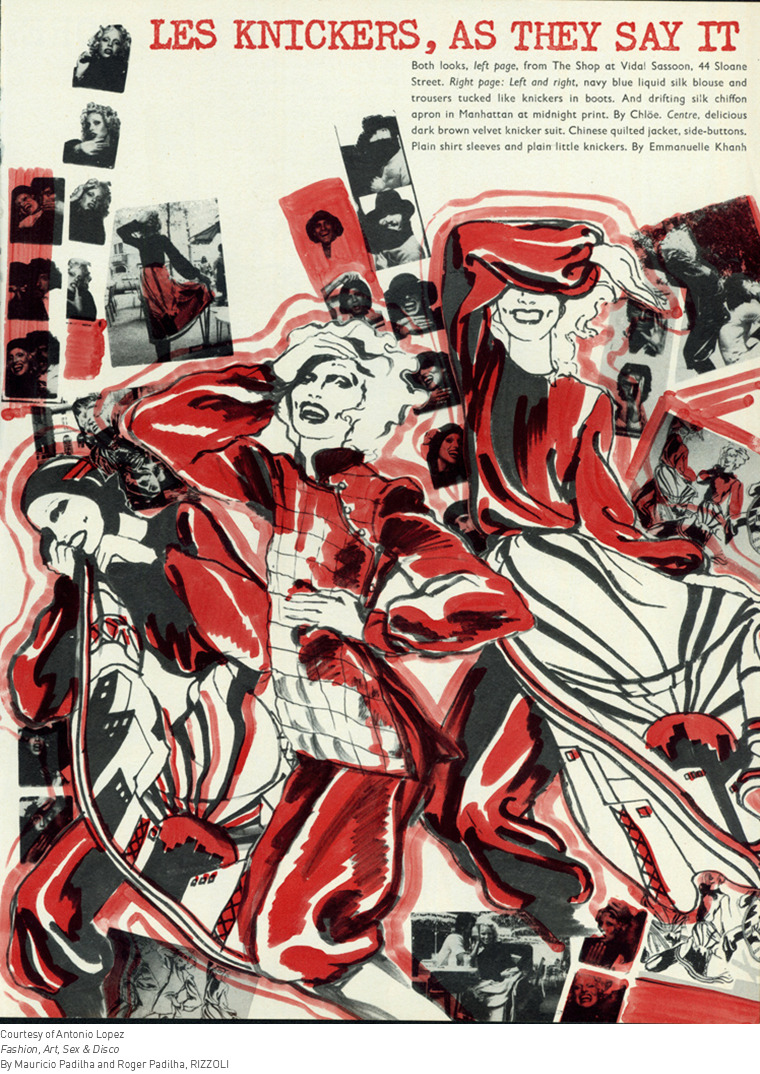 What inspirations were behind the art you created with Antonio?

We had a catalyst view of beauty. Our main beauty education had been films of the 1930s and as a group we studied them diligently. To this day I can name every single costume designer, set designer, actor, and hair and makeup artist from that era. We idolized old Hollywood glamour and our looks were very retro because of it. Donna [Jordan] looked just like all the blond movie stars and Jane [Forth]’s look was certainly not modern. The late ’60s into the early ’70s was very connected to the ’30s, culturally speaking, and we remained devoted to the styles of that decade. 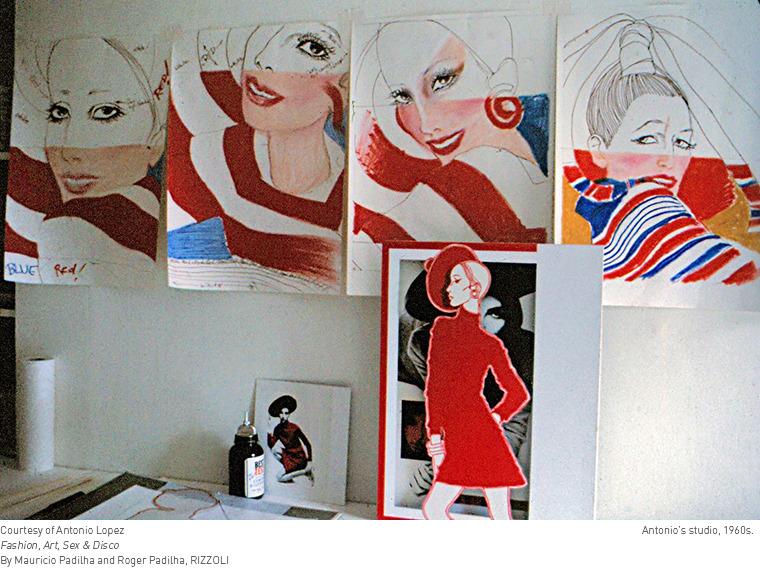 How did you dream up the iconic makeup looks associated with Antonio’s artwork?

We were so inspired by the highlighted and sculptured kind of a look that came from our love of black and white films. Another inspiration was 1950s technicolor, when suddenly blush had become the focus of on-screen makeup. I don’t know where it had been hiding before! Most people think of blush as a secondary part of the makeup application, but for us it was the primary! Jane’s blush looked like upside-down golf clubs on her cheeks. And Donna would create this arch of rouge that went all the way up her forehead, with no eyebrows! Antonio would then exaggerate the looks we created in his own mind. His technique and illustration was so specific and beautiful that it would expand our consciousness. 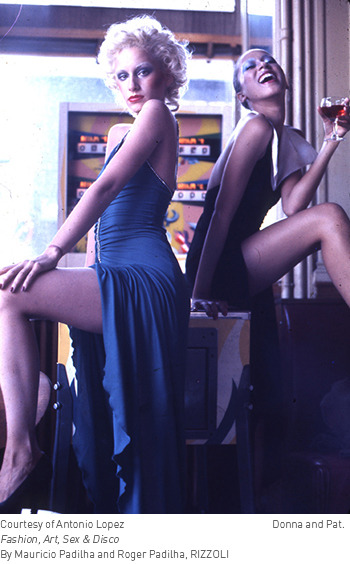 What beauty products did you use for the girls’ signature looks?

We mostly used really cheap makeup that we would find just about anywhere. We were big on highlighter and Candy Darling had told me about these 25-cent lipsticks that they sold in the subway; they came in really vivid colors intended for women of color. I bought a whole bunch of this frosted white shade, and we’d slick them over Donna’s eyebrows after we bleached them to add shine. Jane would just shave her brows off except for the inner areas, and we’d mix eye kohl with vaseline and she’d wear it as gloss on her lids.

Sounds like you really had to get crafty with makeup ideas!

It was barbaric! Jane used to use Wesson cooking oil on her hair. She would part it, oil it, and then pull it back really tight so it looked like patent leather. Another tip Candy gave me was to buy the kind of Maybelline mascara that came in a metal tube and heat it up on the stove and then apply the hot mascara to your lashes. That made it go on really thick and heavy, and when it dried we would take a straight pin and separate the lashes. Dangerous right? But it worked! Getting Donna’s hair bleached was always a challenge. It would take three or four processes to get it the right shade and most stylists refused to do it. “White like an albino,” I’d say, “like Jean Harlow!” And the stylist would tell me they couldn’t do another process without destroying her hair, and I’d say, “We don’t care if you destroy it!” I’d buy human-hair false lashes and dye them with facial bleach so Donna’s lashes would match her hair. There wasn’t a lot of beauty technology around at the time to meet our needs, so we’d really just work with whatever we had. 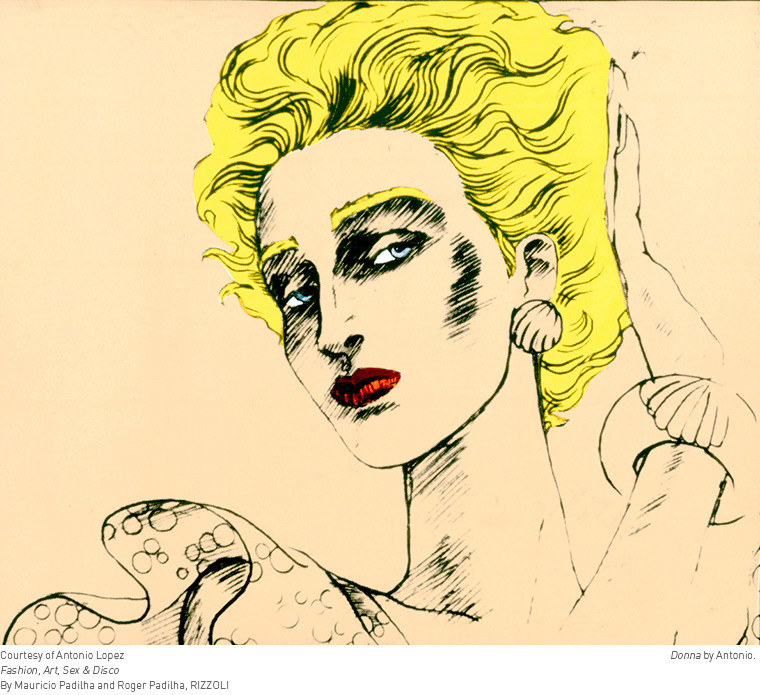 Has the fashion and beauty world really changed that much since Antonio’s era?

In the late ’60s, models often did their own makeup and there were really only about four or five well-known makeup artists in the industry. Models like Donna and Jane, or Peggy Moffitt, for instance, would style themselves and sometimes even bring their own accessories or shoes for shoots. With models like that, the looks would be so extreme that you really knew just what you were getting when you hired them. Each girl had a signature look and a makeup artist’s job was to help them maintain that look. When I think of makeup artists today, their job is really to make everyone look the same. 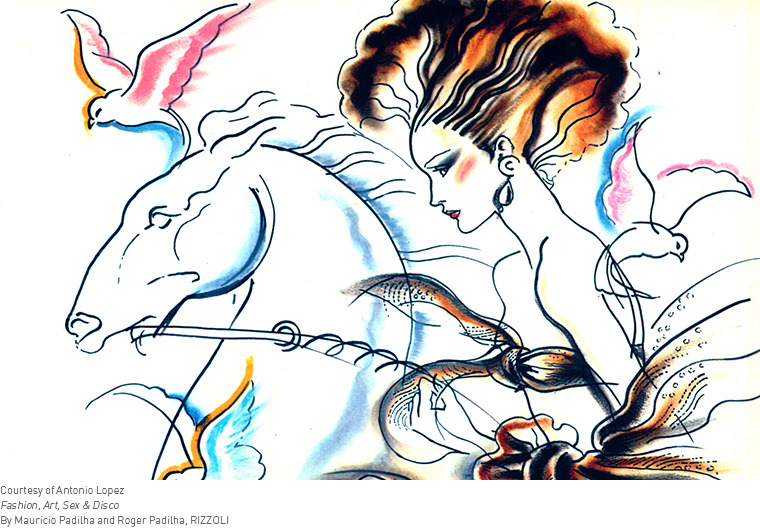 Do Antonio’s illustrations represent an accurate portrayal of your experiences?

Yes. I think he was totally inspired by the moment. He was super flexible and could work in any medium from pencil to watercolor to even modern collage techniques, and then he started to use photography. He was super inventive in his style, but his content was always reflecting some sort of social consciousness. For instance, when we all arrived in France, it was so weird to us to no longer be surrounded by African American culture, which was the source of so much music and entertainment for us. The black people in France were all African and so much of the black culture that we knew was kind of lost on the French. That’s a reason Grace Jones became so huge after Antonio discovered her. When Pat Cleveland arrived in Paris we would go out dancing with her to this nightclub that let us bring our own Motown records, and people would just stare at Pat in awe, as though they hadn’t seen anything like her since Josephine Baker! 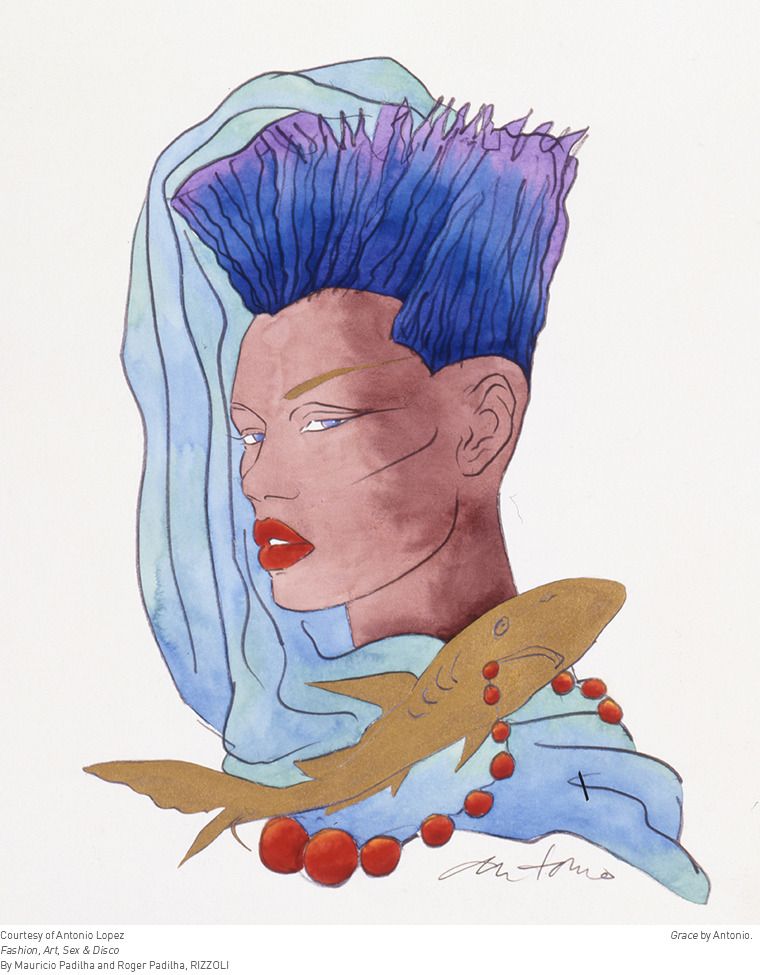 What excites you about the Antonio Lopez MAC collaboration?

I went to a big party recently and was approached by so many young people about Antonio, thanks to all the press MAC has been getting about the line. MAC definitely put their own spin on Antonio, and even though it will give customers a totally different view of his world than the one I have, the campaign is making people hungry for the history associated with Antonio. It’s an era that has yet to be overexposed. There’s still a lot to be discovered about what we were doing, who Antonio was, and the story behind the line. If it were me, I might have done things a little differently but it’s probably for the best. I would have been trying to market white brow gloss!

What would you like the world to know about Antonio?

Antonio was a very curious person. He was never a snob or elitist at all, but instead he was very ‘of the people’ and always ready to embrace outsiders. Warhol was similar in this fascination, but in time Warhol allowed himself to become more of a rich man’s artist by embracing wealth and high society. People are always chasing after status, but being rich and successful will alienate you from art because it isolates you from what’s really going on. Once you’ve made a lot of money, you no longer have a relationship the poor. Antonio, even in success, managed to stay curious and sensitive to the outside world for inspiration. Creativity and success don’t always come from having every advantage. We can certainly attest to that.