An Exclusive Peek at the New Season of “Face Off”

For host McKenzie Westmore, special effects reality TV show Face Off is a celebration of creativity, unique personalities, and exceptional skill in the makeup world. With a background in special effects makeup (her dad, makeup artist Michael Westmore, created the looks for Star Trek!), even she can’t believe her eyes when it comes to the contestant’s final looks. The actress/model/nutritionist has been the host of the show for three years, and much to our excitement, was kind enough to spill some beans about the upcoming season. We picked her brains about themes (oh boy, they’re good), the contestants (you could be on the show!),  her background (she studied special effects makeup too!), and the makeup (sponsored by Make Up For Ever!). Get excited guys, this season’s gonna be ah-mazing. 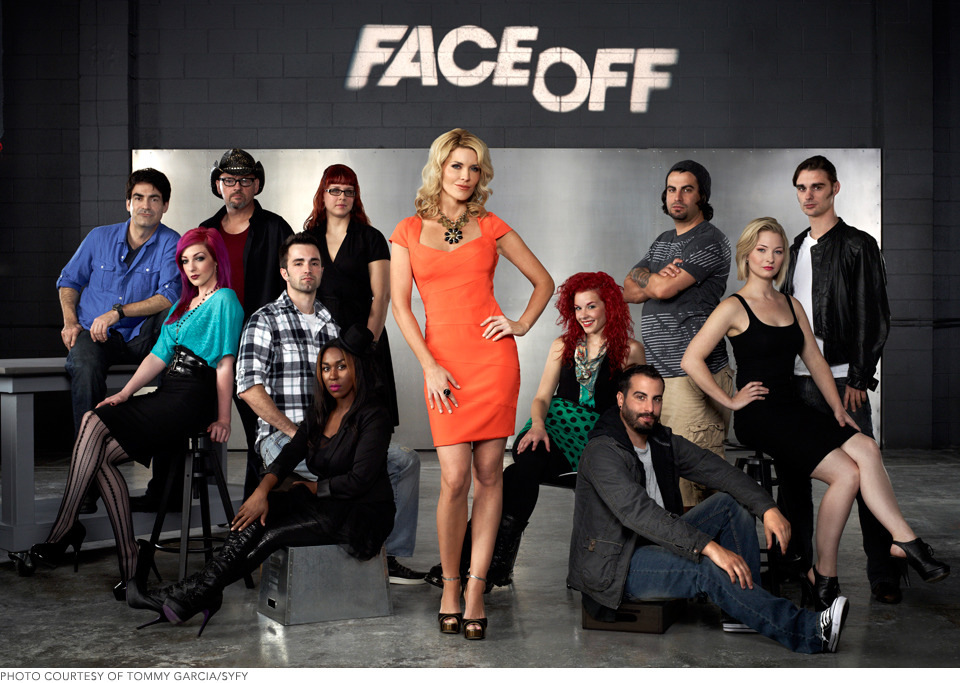 B: Face Off is about to begin its third season—you must be excited! How has your experience been hosting the show?

It has been such an incredible ride and I feel so blessed and so lucky. When I signed on with SyFy I knew what I was getting into with the hosting side, but the contestants I’ve met and the team that I work with have been amazing—beyond what I ever dreamed of. Creatively, it continues to surprise me. Sometimes I have to get up and look closer at the makeup the contestants create, it looks too good to be true! Honestly, it never ceases to amaze me.

B: Is there anything new and different from past seasons that we can expect?

Yes! If you don’t want to know anything about the new season, look away now! The premiere—which is 90 minutes!—is focused on a Star Wars challenge, which I think the fans will like. The contestants have to recreate the cantina scene, and we actually have the music and everything playing at at the end! We’re also going to have a super hero challenge, a Who-Ville episode, where contestants have to recreate Dr. Seuss characters, and my favorite—an episode that’s linked with a charity. We partnered with Kids Say Yes to the Arts, and we had all these kids draw pictures of monsters. The contestants then had to recreate the drawings, and the kids were the boss! They had full artistic direction. I loved seeing their creativity and imagination, it was truly inspiring and so heartfelt! We also have a Chinese Dragon episode, where the models come out and do the dance of the Chinese dragon. And a stunt challenge! Contestants have to create a look that can withstand stunts such as jumping out of a car window, dropping from the ceiling, etc. There are many more themes as well as these and there will be a big twist mid season that’s never happened before. 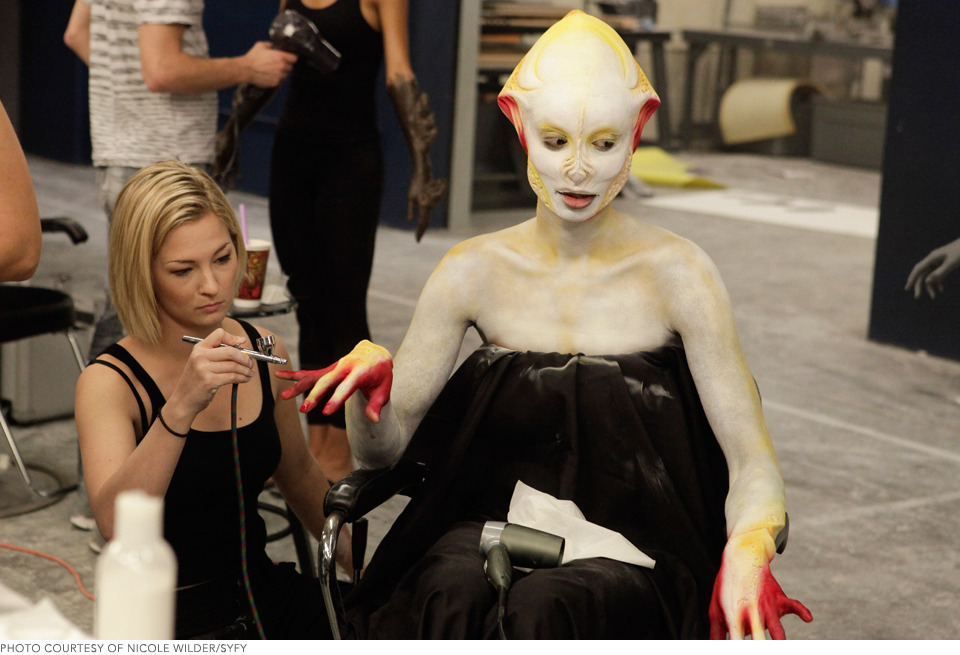 B: And how do the judges decide on these incredible themes and challenges?

The judges and I have nothing to do with the challenges. SyFy and Mission Control have a whole team that researches things, deciding what is doable and viable and what the audience will like. The judges and I are lucky, we get to sit back and see the magic happen.

B: Is it hard to judge a final look? Are there any specific things you look for when judging a contestant?

I have to keep very neutral as the host. I can give an opinion because I get to know the contestants and I have a love for them, but I leave the actual judging to the judges. They look at technique, coloring and concept—are the edges lifting, has the contestant actually followed through on the brief?

B: Coming from a family that was always into makeup, have you seen a lot of talent on the show? Are you constantly surprised?

Absolutely. My dad used to have a week to make an alien and these contestants only have 15 hours. There are ways and means of doing it and they aren’t always camera ready, but it always surprises me with what they can come up with.

B: Can you tell us about the process with candidates—how do they get chosen?

It’s an audition process where they have to send in a video about their personality and why they feel that they should be on the show, then they have to show us a makeup look on themselves. It definitely requires someone that has strength and team spirit. Growing up, I saw how my dad led a team in the lab, they had to be able to follow his vision. The contestants have to nicely tell their team what they want, then achieve it. 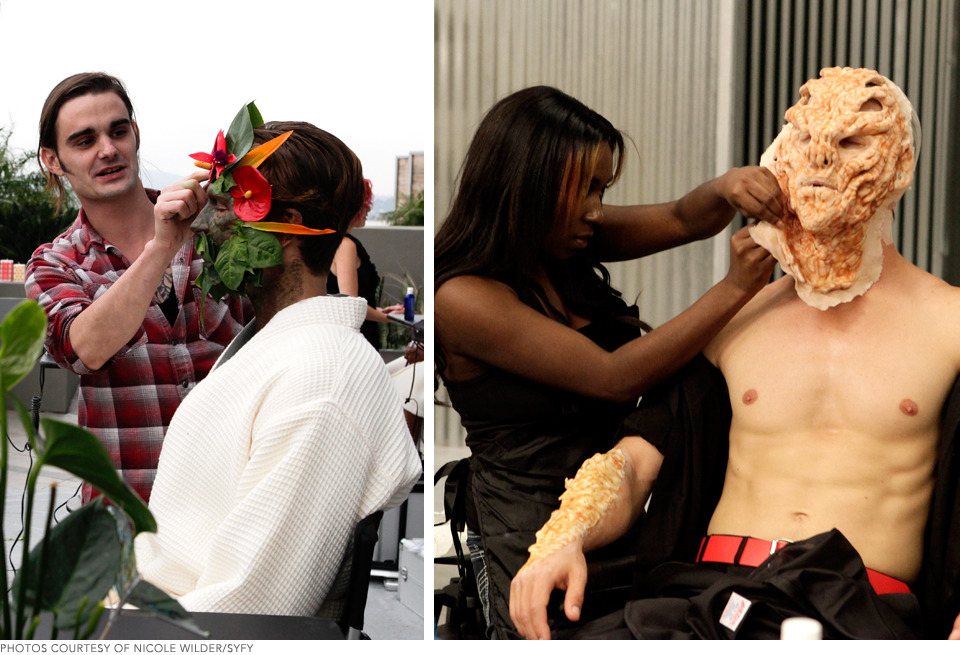 B: The show reaches a wide audience, do you think that younger people are now more interested in special effects makeup?

Absolutely. I can’t tell you how many fan letters I’ve received that say the show has inspired them to go in this direction. Yes, there is CGI but the one thing that CG has yet to perfect is skin. If you look at every computer-generated movie—they can’t get skin right! There will always be a need for a makeup artist—and it’s not as expensive or time consuming. So the two will always need to blend.

B: It seems that the special effects industry is dominated by men. Why do you think less women are inclined to get into it?

It’s definitely a male-dominated industry, but we are starting to see a surge of women and Face Off does give an equal opportunity. It used to be that men were in the lab and women are on set doing the makeup, that’s not the case anymore.

B: How has your family's history in the industry propelled you into this role? Did it fuel a love for makeup?

By trade I’m an actress, I did Raging Bull when I was three. But, throughout the years, I always loved what my dad did, so I did complete a course on special effects makeup and some other makeup courses—I turned myself into a man! But my real love is for acting, so this role, as a host and mentor but also being involved in the special effects industry, is the perfect combination.

B: What do you predict for the future of beauty? Do you think technology will make a huge impact on the way we apply makeup or look after our skin?

In some ways I think technology is destructive, but on the beauty side it’s so amazing. Every week there is something new that is developed that enables us to look better, fix our skin, and apply makeup in an innovative way. Just like the creations on the show, there is something new and incredible to look at and learn from every day. Our minds are always being opened. 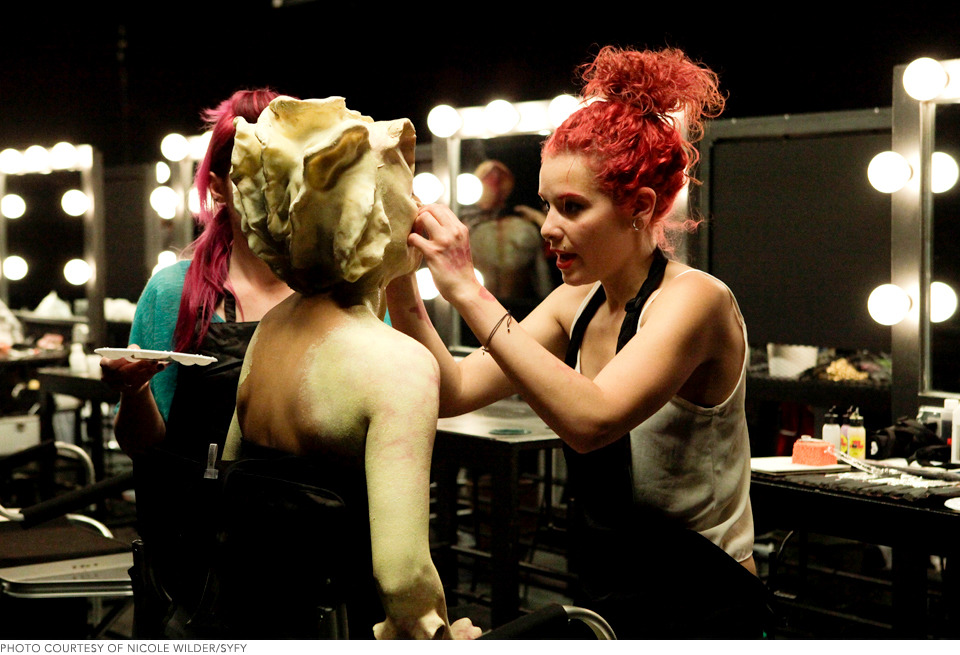