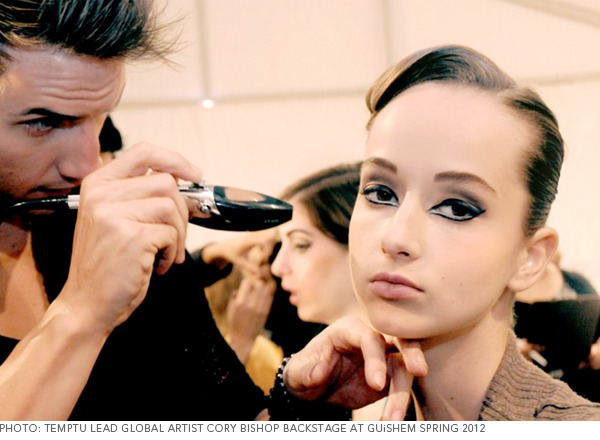 Long before the days of Hi-Definition anything, airbrushing was a secret technique saved for a lucky few. The first airbrush gun was created in 1876, and the spray technology pretty much kept to the automotive, decorating, and film industries for over 100 years (fun fact: Airbrush makeup was first used on camera in the 1925 film Ben Hur).

Over the past 20 years, however, camera technology has improved leaps and bounds. HD’s pixel-perfect tech is almost too real on screen—regular makeup has had a tough time keeping up with incredibly high-resolution displays, and you’ve probably seen the red carpet mistakes to prove it. “It’s not only professional photographers that take high-quality pictures now, it’s your friends putting photos on Facebook,” says Temptu lead global artist Cory Bishop. “Everyone wants to look flawless at all times.” Trained makeup artists backstage don’t have time to go over their work in detail (HD magnifies at six times!), so they use a tool that does most of the blending for them: Airbrush.

We gave a basic breakdown on airbrush makeup for brides, but there’s a lot more to know—especially if you’re thinking of investing in a kit for yourself, or future clients.

When you look at the lingo for airbrush makeup, there’s a lot to take in—and we could fill up pages and pages with technical info alone. Piston, oil-less, and CO2 tanks are examples of industrial-grade compressor types, not ideal for makeup application. Most airbrush systems designed for makeup are diaphragm compressors, which are smaller, less powerful, and more affordable.

The airbrush effect is created when air and pigment meet. Every gun houses a tapered needle which thrusts the air and pigment forward, and the needle rests on a nozzle that the user maneuvers. Some nozzles are “single-action,” meaning the gun sprays like an aerosol can—just push down to spray. Conversely, a “double-action” mechanism enables you to control the intensity and flow of pigment by moving the trigger back and forth. The double-action gun is more commonly used in makeup, and offers greater control in drawing both fine lines and wider strokes. 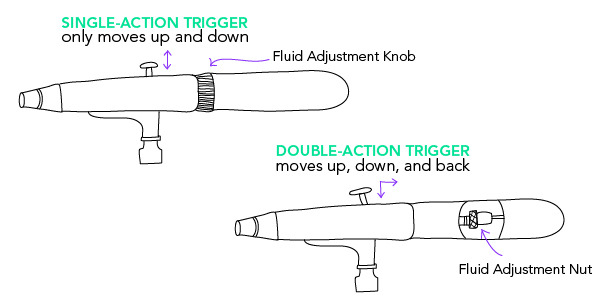 Airbrush makeup has three main formulas: water-based, silicone-based, and alcohol-based. Each have their own pros and cons.

“Alcohol-based formulas have amazing staying power,” says Cory. “Our alcohol formula can last five days! But it’s also 99% alcohol, so you don’t want to use it on the face daily. It’s really only for specific circumstances when you need ironclad makeup to stay on for days,” Shade ranges tend to stay color-true from the gun onto the skin.

“The technology is the same as pancake makeup, except a water-based airbrush formula is already mixed in the water,” explains Cory. The makeup appears matte on the skin, and it’s easy to build full coverage. People prefer this formula for work under bright lights where you can’t have shine—it’s even used for anchors on FOX news! However, water-based means water-activated. Tears and sweat can move and smudge the makeup around easily. Color-wise, since water-based airbrush has a matte texture, you need to airbrush the entire surface of the skin to make a match. “Imagine you have a white wall with a mark. You could go to the store and buy a can of white paint, but the next day you’ll see where it dries,” clarifies Cory. “Water-based makeup changes the texture of the skin, so you have to airbrush it everywhere.” Depending on the manufacturer, water-based makeup can sometimes darken from one to three shades.

Silicone-based formulas are slowly becoming more popular, and Temptu was actually the first airbrush system to use silicone in their formulas. “It looks like skin and has the same finish as bare skin. As long as the shade match is right, you can’t see where the skin ends and the makeup starts,” says Cory. Unlike water- or alcohol-based formulas, a silicone formula doesn’t dissolve. “Our skin constantly produces moisture to break down and protect the skin—it views makeup as dirt. We makeup artists do things to preempt that, but the pigment just doesn’t break down with silicone.” Color-wise, silicone is also more forgiving. A close shade match is always important, but you can get away with airbrushing a few parts of the face and leaving the rest natural. Silicone tends to deepen about half a shade. When in doubt choosing between two shades, select the lightest.

PSI, also known as pounds per square inch, measures pressure. In airbrush makeup, PSI controls how far the makeup projects out from the gun. Usually, you’ll need a bigger PSI the larger the canvas, otherwise time becomes an issue. “I had a friend that got a great deal on a compressor, but you couldn’t change the pressure of it,” revealed Cory. “It was set at 200 PSI—that’s what they use to compress sidewalk cement.” 30 to 40 PSI is normal for airbrushing on the face, while some body makeup artists use larger compressors at 70 PSI. 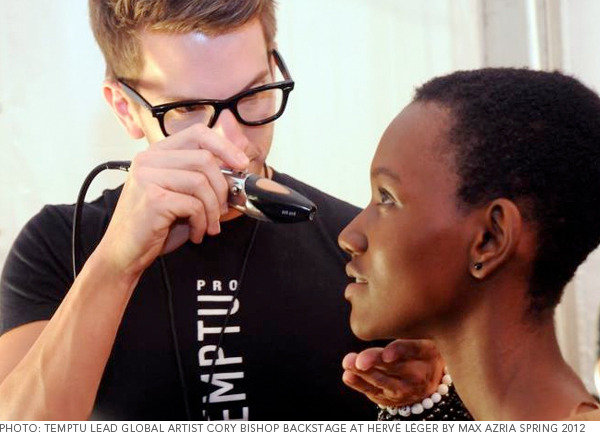 CHOOSING THE RIGHT AIRBRUSH MAKEUP FOR YOU

“If you’re venturing into doing airbrush for business, I recommend splurging on a professional system because they are universal,” says Cory. “You can buy a gun from Kett or Mehron or MAC, and all the parts fit together. But if you’re getting if for yourself, I love Temptu's Air Pod foundation—I use it on myself every morning. But it depends on what your needs are.”