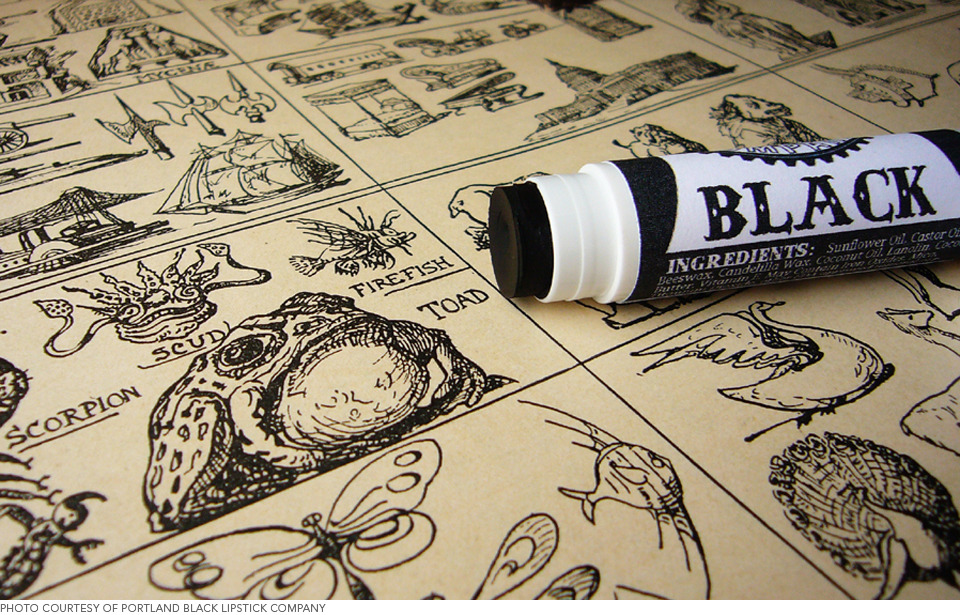 When the Mars Curiosity rover officially landed, and all Portland Black Lipstick Company founder Kim Damio could think about was the red and black iron oxides that color the surface of this uncharted planet—and her lipsticks. It's this kind of witty humor that she brings to her Victorian-inspired makeup line, but really, the brand starts and finishes with the most prized possession in Kim’s beauty wardrobe: the little black lipstick.

Her initial urge to start PBLC in 2011 came out of frustration with black lipsticks currently on the market; they were either too dry, too sheer, or too fleeting on the lips. With the northwest's heavy DIY movement as influence, Kim began developing and perfecting the formula for her potent onyx lip color (we’ve tested!), and expanded the line to include a shade range that reads like a mad scientist’s dream—complete with allusive and gothic monikers such as Undead Red, Metallurgy, Cyanosis, and Bug's Blood (which actually includes carmine). In fact, she often reverts back to the original 19th century formulations for inspiration, sans the stuff that can kill you, of course.

Now you all know we embrace a black lip with profound gusto and enthusiasm, and we haven't stopped experimenting with these rich colors for weeks. Thanks to the Lip Tar revolution, a mouth lacquered in black or blue isn't so out of the box anymore, and Kim's all-natural, ingredient-happy formulations make us thrilled to play kitchen chemist in the studio. So for those looking for the perfect black lip for fall, consider your search over—you've just met the expert on the matter.

B: Hi Kim! What made you want to start PBLC?

Back in the nineties, when I started getting interested in natural cosmetics, I couldn't find anything but relatively 'natural' colors. I remember that dark purples were usually the darkest shade I could find—a few browns maybe—but that was it. I ended up using natural black eye liners for lipstick until I decided to make my own.

B: Why black? What makes a good black lipstick?

Ah, my favorite lip color. Looks great on everyone and can be worn with everything—though perhaps I am biased? In my opinion, what makes a good black lipstick is lots of pigment. You can't get away with using low quantities of color, or the results won't be opaque, and opacity is really important if you are making a true black lipstick—not a tinted gloss or something. You also need a very moisturizing base or wearing all that pigment won't be very comfortable. 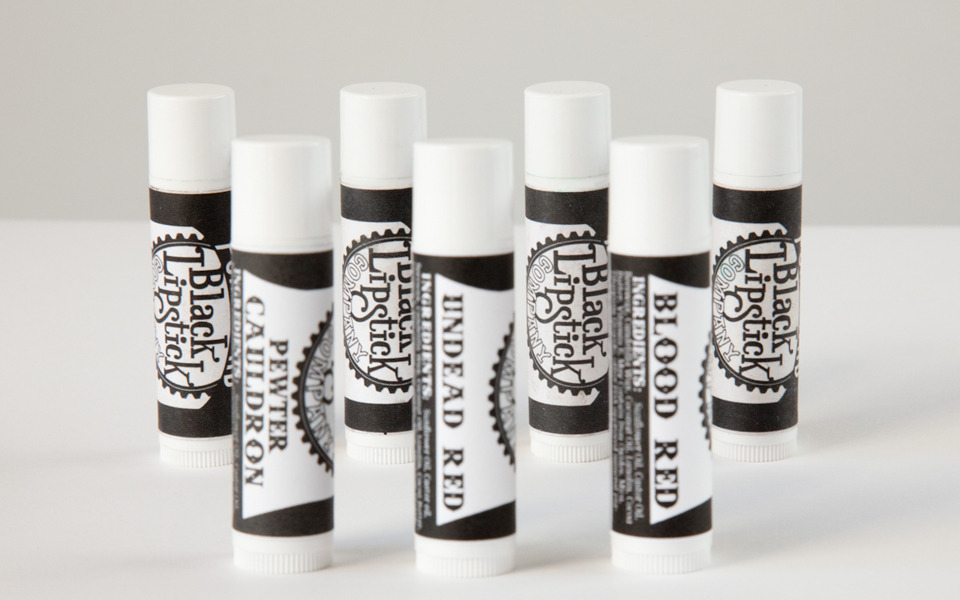 B: You’ve also got a roster of vibrant colors in your lip collection as well—Difficult Island (aquamarine), Gilded Lily (gold), and Chlorosis (bright mint) come to mind.

I try to have a wide array of colors, and I really love blues and greens! Lots of people really like the bright pastel shades. Current best sellers include: Black,—of course—Indigo Bridge, Lux et Voluptas, The Purple Cloud, Difficult Island, and Bug's Blood.

B: With the historical (and physical) nod to carmine in Bug’s Blood, what’s your take on vegan makeup?

My standard lipstick base is not vegan, since it includes beeswax and lanolin, obtained during the processing of wool. I have been working on a vegan version of my base for customers who would prefer that, but it is taking longer than I expected to get a consistency that matches my original formula. Meanwhile, my face powder, corpse paint, and glitters are vegan. I, personally, am not vegan, but I really like that customers are interested in the ingredients in their makeup, and are shopping in accordance with their own interests and beliefs.

I mean, before most cosmetics and toilet articles were mass-produced, many items were made in the home or made up to order by local pharmacists. At the risk of over-generalizing, mass production offers less in the way of personal choice. In America, before the 1980s, cosmetic companies didn't have to list their ingredients on packaging, so it was harder to be an educated consumer. These days, people can really pick and choose what they like, which harkens back a bit to those early cottage industry years, and is definitely an improvement in my opinion. The rise of indie makeup companies is wonderful, since it allows for a lot of options—something for everyone, really!

B: PBLC seems to have a decidedly neo-Victorian look and feel, how do you take inspiration from the era?

The neo-Victorian imagery really fits what I'm doing. The kinds of products I'm making are very, very similar—in some cases exactly the same—as the ones made and sold during the last half of the 19th Century and the early 20th Century.  I take some liberties, of course. Not a lot of blue lipstick in Victorian England, I think! But the basic techniques of making lipstick aren’t so far from making a fancy grease paint, so there are many commonalities.

I have been extremely pleased that my makeup appeals to so many different people. And, really, the important thing is that people are able to construct and celebrate their own identities and that they have fun while doing so. 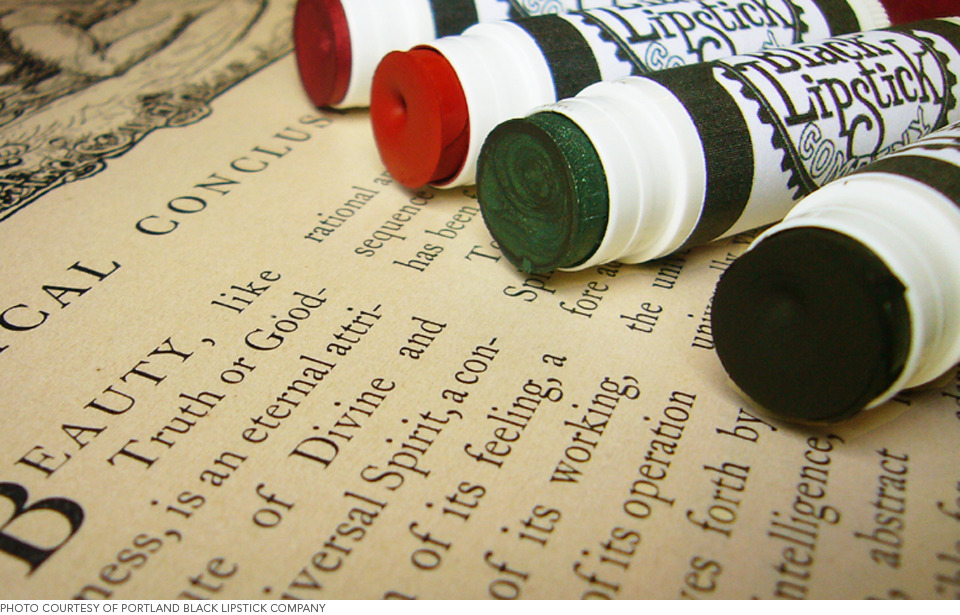 B: Portlandia! Did the brand's namesake town influence you?

I have lived in Portland for close to a decade now and I definitely think that my residency here has influenced what I do.  There is an incredibly strong DIY sensibility out here. If I tell someone that I make lipstick, or shaving cream, or liquid nylons or something, they might find it interesting, but they don't think it's really that strange. People are also very flexible in Portland. I've been invited to sell lipstick at vegetable markets here! I mean, that's pretty great!

B: You certainly have fun with the brand—tell us about the slogan “All-natural makeup for that un-natural look.”

It stems from my early years trying to find natural makeup in unusual colors that I mentioned before. What do you do when you want blue lips, but you don't want to use aniline [synthetic] dyes? There are still not a lot of options out there.

B: The site copy is awfully humorous as well. Do you write it yourself?

Oh, thanks! I do write my own copy, but I also get inspiration from my friends and from books I read for the names of lipsticks and other products. The Purple Cloud is a strange end of the world-type novel from the turn of the 19th Century and 'The Deeps' is short for Out of the Deeps, the American title for The Kraken Wakes by John Wyndham.

B: After Phantom Powder, Glitz, and Night Cream, what more would you like to develop for PBLC?

Hmmm. Well, you can never have enough lip colors, so more of those. I want to do more historical recreations, since those are always really fun to make. I have sold Bear's Grease Pomade at events before, and it's been quite popular, so I'll probably launch it soon. That one is vegan—no bears or bear-derived substances involved.

B: What’s the biggest obstacle you’ve faced since creating your line?

This might seem a bit cliche, but you really do have to obsessively love what you do. Running your own business takes so much time and effort that, if you don't love it, you'll probably end up hating it!

B: Any advice for those looking to start their own beauty brand?

It's great that so many people are starting up their own lines! The more the merrier, I think.
I started making stuff that I wanted, but just couldn't find. And I was able to make the products better over time by wearing them myself, and by having my friends and family wear them. If you make what you wear and what you like, and if you use your business as a way of expressing yourself—if it is your art project as well as your business—then it will always be interesting for you and your customers.