The Couple That Wears Makeup Together, Stays Together 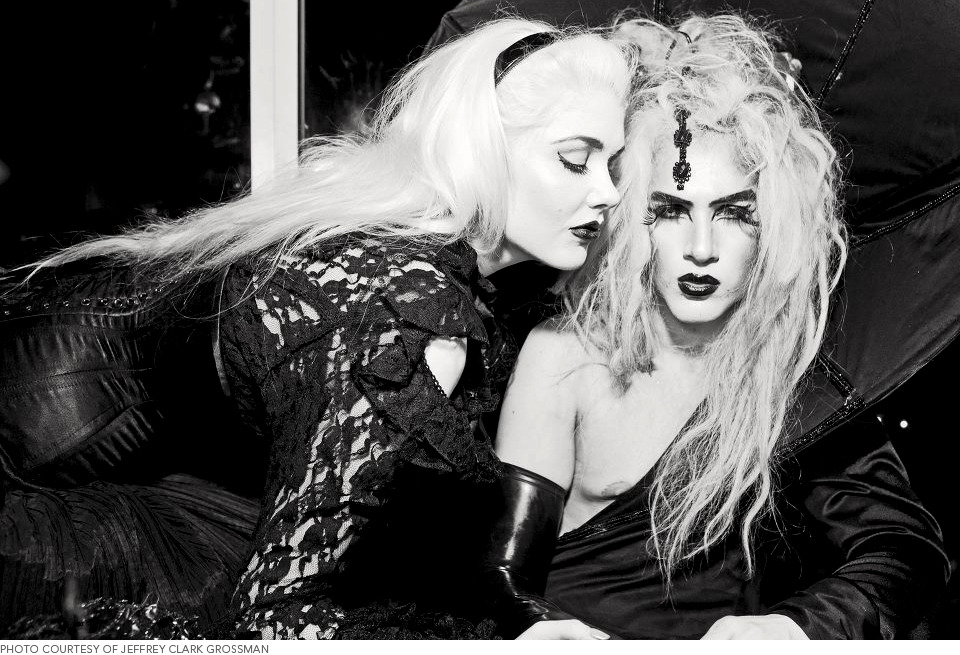 New York City club legends Kayvon Zand and Anna Evans are a team you have to see to believe. The real life couple is rarely seen separately and with a style this strong, it would almost seem wrong to have one without the other. The two have been creating living art together for almost three years, and have maintained a strong albeit unique relationship throughout. Anna, a self-defined sex symbol, fronts her famous figure at high class cabaret shows around the city while Kayvon, an accomplished electro pop musician and performance artist, finds inspiration for his over the top looks from the underground icons who came before him. The two make regular appearances at private parties and clubs and have even established The Zand Collective—an alliance of like-minded artists, models, and provocative personalities who host shows and exclusive events across town.

The remarkable thing about Kayvon and Anna is the strength of their style as a pair. Vanity is a key element of their relationship, but the artistic devotion they have to both beauty and personal expression comes off as anything but arrogant. Under the Illamasqua lipstick, beneath the hairspray, and beyond the his and hers vinyl dresses are two down-to-earth dreamers whose love of art is equal to their love for each other. We paid the delightfully dark duo a visit to learn more about the couple’s uncommon approach to beauty. 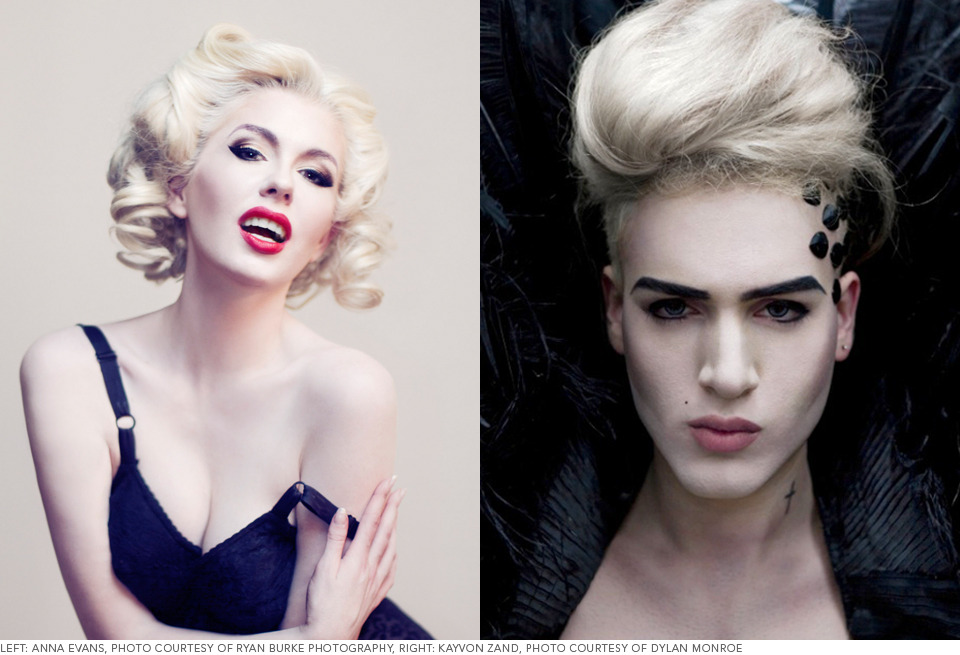 B: What was your personal style like before you met?

Anna: Before I met Kayvon, I was living in Philadelphia. When we met neither one of us looked ordinary. At the time I was wearing a sequin denim mini skirt with fishnets and five-inch heels. Kayvon had a black pompadour, and I was doing big teased asymmetrical eighties hair. We met in the basement of a goth bar, and we looked like we belonged there, you know?
Kayvon: I think at the time we were definitely living within the rules of the subculture that we identified with.
Anna: The stuff that we were wearing that night, we would now consider to be a day look only. I mean, today I would never wear denim—even if it were covered in sequins!

B: Kayvon, were you wearing as much makeup before you met Anna?

Kayvon: There were phases. When I started to get serious about being a musician I was going to club kid parties where the choice of dress was flamboyant and very over the top. I found it to be a really safe playground where I could be experimental with makeup and be whoever I wanted without worrying about being judged. Around the time I met Anna I was starting to get back into using makeup but in a totally different light...er, black light. I wear more makeup now than I ever did before, and I think at this point in time it’s the heaviest it’s ever been and I like it. I also like to wear body makeup. I view the process as killing yourself to look beautiful which is kind of a cultural commentary. I think a lot of people are killing themselves to be beautiful, but in a more commercial sense.
Anna: Like those people who use products to try to look like they’re not wearing any makeup! 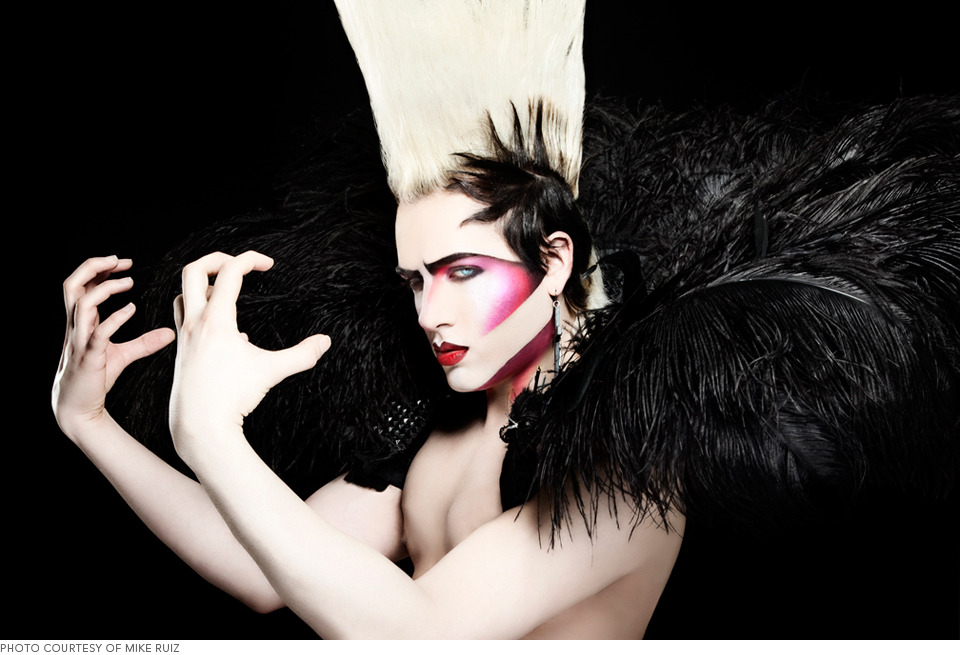 B: How did your style evolve after you started dating?

Anna: In the beginning I hadn’t really been exposed to anything in the city beyond goth clubs and burlesque shows. Kayvon helped introduce me to the fashion and nightlife world, so for me this relationship has really been an education in personal presentation. Since we met our style has become more refined.
Kayvon: And a little more glamorous. Our style has definitely evolved together. Our similar appreciation for culture brought us together but I think now we definitely cross lines. We’ve been exposed to a lot of the different aspects of fashion, and have morphed them into our own by taking bits and pieces of things that have influenced us and that we’ve learned to appreciate together. The base of our style was there before we met, but it wasn’t at the peak that it is now.

B: Anna, was Kayvon’s flamboyant fashion part of what attracted you to him?

Anna: Oh absolutely. I don’t date anyone who doesn’t wear makeup. I think there is something really attractive about a man who can embrace his feminine side. I like it when men play with the idea of androgyny, more so than when women do. But I also don’t believe in natural beauty.

B: Kayvon, does Anna’s personal approach to beauty inspire your own?

Kayvon: Anna is really inspiring to be around, and she’s definitely introduced me to new things both aesthetically and style-wise. I find it’s just very inspiring to be with someone who is always striving to be better, while working with what she’s got. She’s always wanting to take her personal style further and I definitely relate to that. 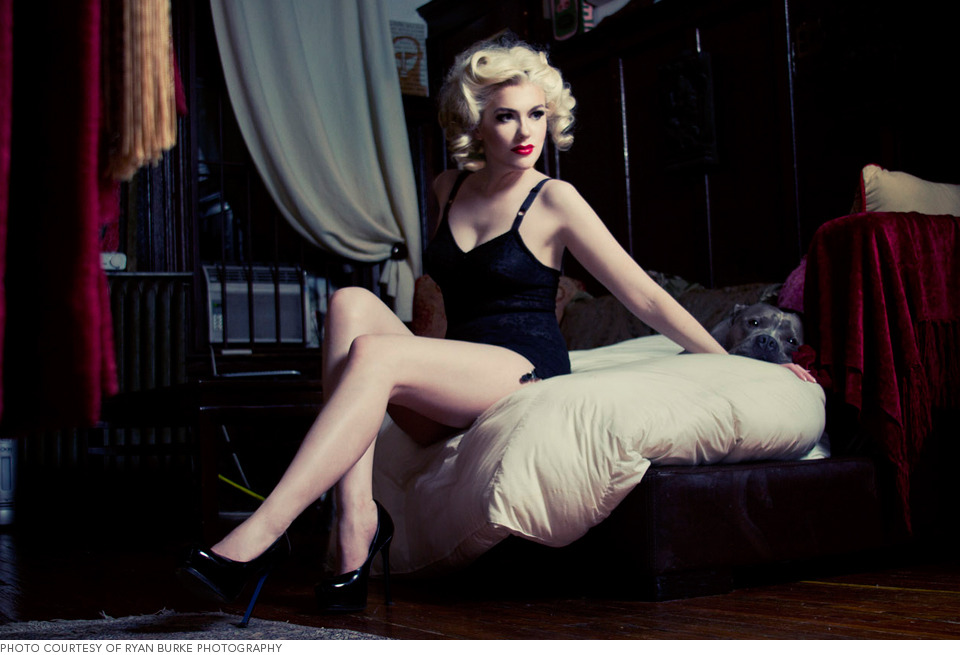 B: Where do you get the ideas for your many looks?

Anna: Honestly, a lot of my personal style comes from trying to impress Kayvon! It’s no secret that when we started dating I completely changed my hair. My fashion sense used to be a lot more goth, but now I tend to stick with a pin up look with lots of red lipstick because it’s his favorite.
Kayvon: I’ve always been inspired by the great musicians that came out of the New Romantic movement like Steve Strange or Boy George. What’s really interesting about that era was that at the time, people didn’t really know what to call it. That’s something we deal with all the time. People ask us ‘What is this style?’ ‘What is this called?’ I think that’s a sign that we’re on the verge of something new. I think truthfully, our approach is taking dark elements and making them glamorous and fun.

B: It’s interesting that you both tone your style up for each other. Usually it’s the opposite.

Anna: Instead of trying to fit myself into a lot of different fashion boxes I’ve narrowed in on one style and turned up the volume, really making it my own. However, I do feel like Kayvon is a huge inspiration for the way I choose to present myself on a daily basis.
Kayvon: But it’s more than just for each other. We dress up for the people we hang around with and the places we go. About a year into our relationship we started to notice people were really getting into our style. It felt like we were starting a movement here in the city and that’s when we established the Zand Collective. 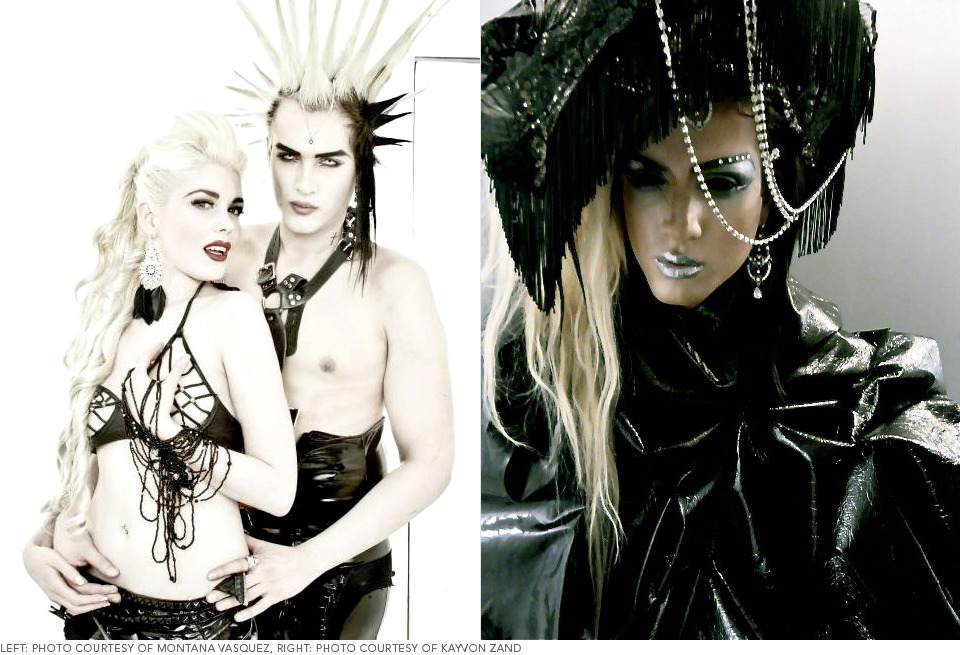 B: What’s your approach to gender roles in terms of beauty?

Anna: Playing with gender roles is a very big thing for our art. Personally I want to be just as feminine as someone who is transgendered. I think biological women are often much less concerned with beauty and femininity than they could be.
Kayvon: We definitely incorporate themes with gender and orientations. Those are both things that have definitely been a big part of our lives. Some people are surprised to learn that Anna was dating a woman before she was dating me. Just for reasons like that people might not take us that serious as a couple, and when I’m overly done up people might not take us that seriously either. I like to play with these ideas and let people see that we’re together. It just makes people open their eyes. What we’re doing isn’t drag. What I mean by drag specifically is that we’re not trying to impersonate anyone. This is a lot different because it’s a lifestyle.

B: You style yourself this way 24-7. What reactions do you get during the day?

Kayvon: We’ve definitely lost the day-to-day respect that normal pedestrians have and it’s very alarming at times. People come up to us constantly and take our picture or ask us questions, and they always think that if we don’t want to participate that it’s the rudest thing. They don’t realize how intrusive they are being. It’s one thing when we’re out at the club, but during the day I’m not looking to be approached and photographed.
Anna: I set myself up to be a sex symbol, but sometimes I become unconscious of the fact that I’m not like other women anymore. For instance I don’t wear flats. I don’t do it, flats are for boys. I don’t wear flats and I don’t wear pants. These are things that I do not do. I don’t think about it until I go places alone. Sometimes going out can feel unsafe. I don’t like attention when I’m not asking for it.
Kayvon: It’s a lifestyle that not many people have experienced, but it’s definitely one that can cause a lot of anxiety. At times it can make me feel like ‘Damn, I really don’t want to go to the corner store cause I don’t want it to be a whole production. I don’t want to deal with people.’ The normal things that other people may take for granted end up being a whole endeavor, but that’s just part of accepting this lifestyle. When you want to live your life as a walking piece of art, thats just something that you have to be ready to take on. 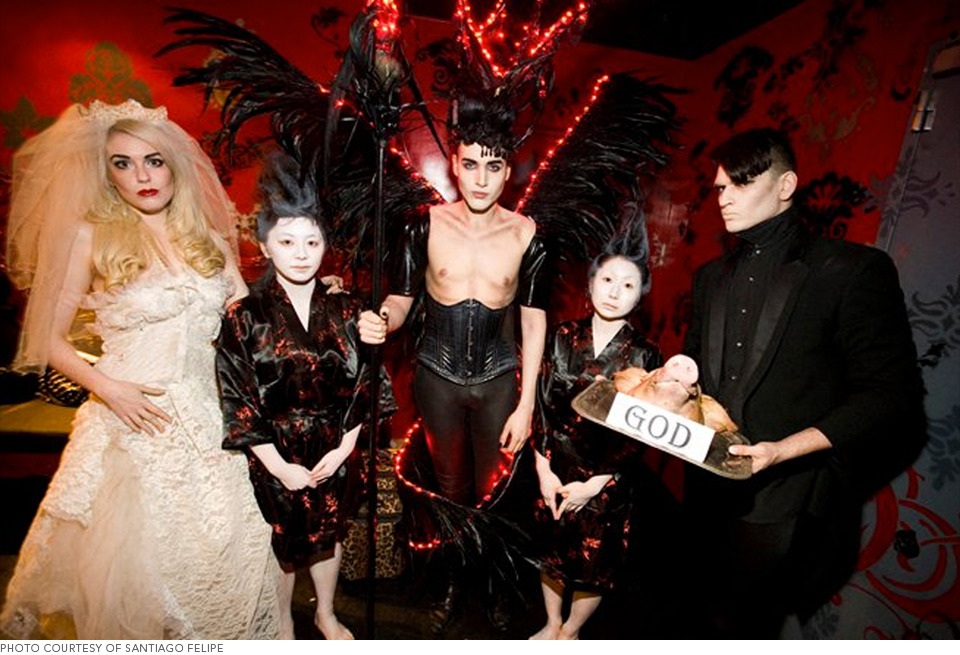 B: Do people tend to have any misconceptions about you based on how you choose to look?

Anna: I think people are constantly surprised that we have such a normal relationship.
Kayvon: I mean, we’re not normal but at the core of it we are. We’re kind of like a glamorous version of The Addams Family.
Anna: We’re monogamous. We have pets, we want children. Eventually we want to get married. We essentially want the American dream, just a lot better looking. I think people are very surprised when they realize that’s the way it is under everything.
Kayvon: And that’s good. It opens people’s eyes because at first I think they’re judging the book, but I don’t mind being judged. I feel like we need people to shake up society and make people think twice. My relationship, my family, my life can be a creation of what I want as opposed to having to conform. Creating something together is really the thing that makes this relationship live on and continue.

B: Just because you’re dressed in black doesn’t make you mean, scary people.

Kayvon: Yeah, exactly!
Anna: And we’re not miserable or listening to Morrissey.
Kayvon: We’re just creating together. It’s a good feeling. I feel like we are definitely putting a stamp on something. We’re just not sure what it is yet.