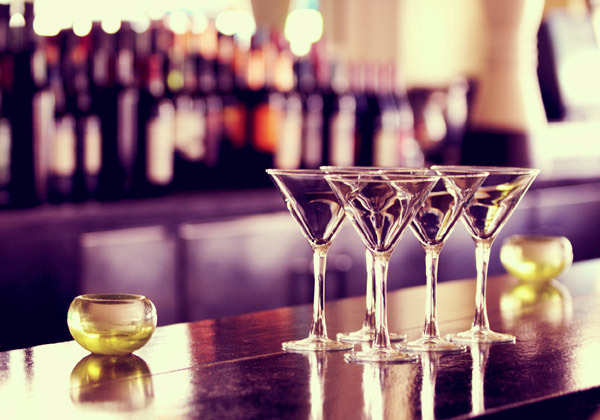 “Are you okay over there?” my date asked from across the table, sipping his bourbon on the rocks. I had just dropped my fork on the floor and, in an attempt to reach down and pick it up, had lost my balance and plummeted onto the sticky, food-stained carpet. My underwear was on full display. I quickly bounced back up and sloppily plopped back on the chair.

“Yess’hh. I’m f—fine,” I slurred, trying to pretend that had not just happened.

To recover, I picked up my martini glass and took a sip of air. Not a drop of vodka left. Damn.

I’m drunk, and you suddenly have two heads, I thought.

I looked around the restaurant at the decadent decor. The floor-to-ceiling, deep purple velvet curtains didn’t appeal to me, and neither did my blind date. He legitimately grossed me out. Somehow, he hadn’t gotten the memo that the *NSYNC boy band look had died about 10 years earlier. The only thing in this godforsaken place that did appeal to me was the martini that helped numb the disappointment of yet another dating disaster.

About two sips into my first drink, I immediately ordered another.

“I like your style. I’ll take another as well,” he smirked, as he winked and whipped the summer-weight scarf that coiled around his neck. He probably thought he was going to get some action, and he was mistaken. Plus, I thought I had just spotted a hoop earring in one of his ears. Another faux pas. 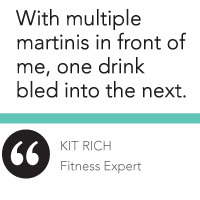 I blinked really hard, hoping the earring was just my imagination and that I was seeing things. Yup, still there and, yup, still seeing double. With multiple martinis in front of me, one drink bled into the next. By the end of the first one, I was definitely tipsy. But by the end of the third, my perceptions had changed—*NSYNC was now my absolute favorite band ever, and did I tell you I loved purple velvet?!

As the night progressed, my date proceeded to down bourbon as though it were water without ever catching a buzz, while I was on the other side of the table waving the surrender flag. Not to mention that I totally forgot about dropping my fork on the carpet and proceeded to eat with it again. Let’s just say I was on another level. 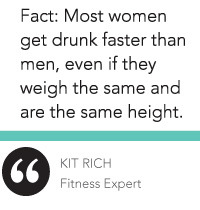 Now, I know there are some women who can drink any guy under the table. But have you ever noticed that most women tend to get drunk faster than men? This is actually not speculation but a scientific truth. Fact: Most women get drunk faster than men, even if they weigh the same and are the same height. There are two main reasons for this.  The first is body composition. Women have a higher ratio of fat to water than men do, and without as much body water, the alcohol gets diluted at a slower rate. Think about it like this: If you had a huge glass of water and dropped a shot of vodka into it, the vodka would be diluted much more than if you put the shot in a glass only half full of water.

The second reason stems from an enzyme called Alcohol Dehydrogenase (ADH), a compound in the body that breaks down alcohol in the stomach. In women it is found in smaller amounts, (on average, about half of what is found in men), causing a larger proportion of the ingested alcohol to reach the bloodstream.

It has also been suggested that before menstruation, a change in hormones may make women more susceptible to getting drunk faster.

Although this blind date happened a long time ago, and although I wasn’t as aware of my drinking limitations as I am now, what I did that night was just plain stupid. I didn’t know this guy at all, and I created a situation for myself that could have been potentially very dangerous. Luckily, as cheesy as he was, he was basically a good guy—and, luckily, I wasn’t driving that night either. The evening ended with me in a cab, sleeping in my bed safe and sound, and waking up to a horrific headache. I’m so grateful that that was the worst of it. There was no excuse for my behavior. But I can say that I learned from it and never did it again. 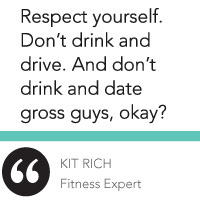 Years later, I am now what you would call a “cheap date.” Whoa! No, it’s not what you’re thinking. What I mean is, when I go on a date I only have one drink. That’s it. And I sip it very slowly.  One drink, and I’m still me. One drink, and I can still gauge the guy across the table from me properly. In retrospect, I could have avoided so many awful guys if I hadn’t had alcohol to cloud my perception of them. Please be safe out there. Love yourself. Respect yourself. Don’t drink and drive. And don’t drink and date gross guys, okay?

I would love to hear your stories! Please post below!

Kit Rich is Los Angeles-based fitness trainer with endless exercise and nutritional know-how. Hollywood's hottest stars are addicted to Kit's unique, multi-disciplined approach that combines cardio, yoga, Pilates, and weight training. Kit's clients are immediately taken by her funny and honest approach to health and fitness. She treats her clients as she treats herself, "with a hard challenge, sensibility, sensitively, and a good laugh." Follow Kit on Twitter @kitrichfitness.