Would Your Man Rock Nail Polish? 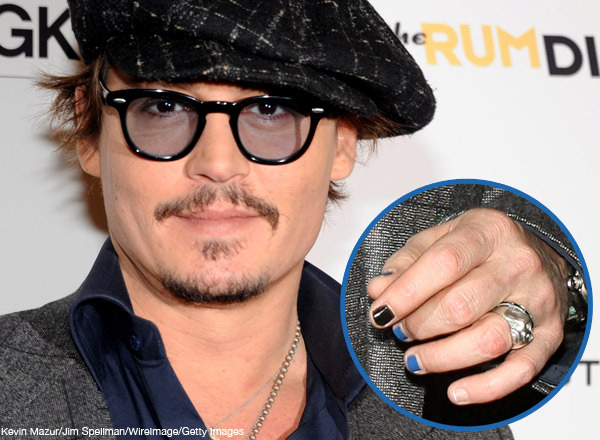 Rockstars, celebrities and fashion designers sport colorful manicures (we’re looking at you Johnny Depp!), so why can’t a normal guy take the polish plunge? “Male” polish, nail lacquer designed for men, is fast becoming a trend amongst style savvy guys, and with importance of male grooming nowadays, it’s nothing to be ashamed of! Sure, a clear lacquer is probably the preferred finish choice, but brands like Alpha Nail are launching fashion-forward colors and finishes (Burnin’ Rubber anyone?) for the trendsetting gentleman in mind. Beautylish decided to explore the trend from a man’s perspective, so we sat down with three of our favorite dudes for their take on the man-icure. 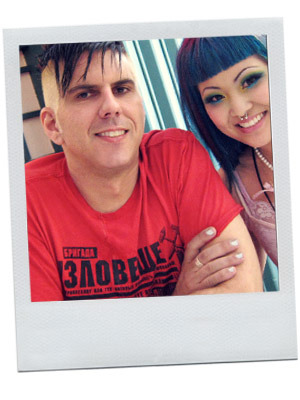 Kevin Marburg, co-founder and creative director of Sugarpill Cosmetics, has consistently worn polish for over 15 years. “I’m an artist and work in the cosmetic industry, so I’ve always had jobs where it’s not seen as strange or unexpected to wear nail polish,” says Kevin. His favorite bottle of choice—and the only hue he wears— happens to be silver (OPI’s discontinued shade Kyoto Pearl is his all-time favorite formula). “It has the right amount of shine without being overbearing.” For Kevin, nail polish is just another way to express his personality, and adds “a little bit of bling without putting in too much effort.” And besides, why should girls have all the fun? Kevin also credits his band days as a confidence booster. “Being on stage lends itself to dressing over the top. You want to show yourself off and look your best. An eccentric haircut or cool makeup and nails are all part of the experience,” he says. 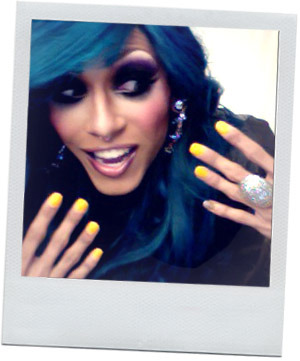 Josh Plock—also known as YouTube guru Petrilude and drag queen Misty Maven—prefers deeper, more vampy varnish. “I prefer things to be on the darker side—with my clothes and makeup,” says Josh. “Most of the time [my nails] look black, but in sunlight reflect dark green or navy blue. Either that, or it's bright neon.” For Josh, colored fingertips have never been a point of contention. “The only time I get negative attention for my nails is online through my YouTube videos,” he reveals. Surprisingly, he wears nail polish more often as himself than as the commanding diva, Misty Maven. According to Josh, many venues require drag queens to wear colored nails, whether they be press on, acrylics, or regular polish. His favorite formula? “I love Manglaze,” reveals Josh. “The matte polish dries quickly, so it’s easier for me to apply!” You can find one of his tutorials here! 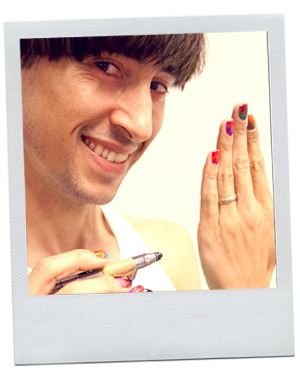 From performance artist Malcolm Stuart, anything goes in the art world. “I wear nail color all the time!” exclaims Malcolm, who expresses himself through a  continuum of painting, costume, makeup and performance. Unlike Kevin and Josh, Malcolm wears nail polish practically every day. “People don’t expect a man to wear nail polish, so I get a lot of attention when my hands are colored. Probably more than any woman!” he says. Rather than stemming from a need to groom, Malcolm’s devotion to his digits comes from an experimental, creative mindset which reflects in his art. “I don't do it out of rebellion, I do it because it's fun. My style comes from a desire to play and not take life too seriously.” While he approaches nail art from an aesthetic frame of mind, Malcolm’s love of enamel has been the topic of cultural discourse. “My favorite moment wearing polish was when a young child disapproved upon first glance,” he recalls. “I asked her if she liked to wear color—she nodded—and I told her I like wearing color as well. Then, something just clicked, and she got it. It felt like a moment of connection, where she saw the world in a way that was just a little bigger and a little bit more accepting.”

Male polish isn’t for everyone, but there’s nothing stopping a little gender-bending glamour now and then. While the reactions may be mixed, don’t let anything stop your self-expression.