With clinically proven Total Soy Complex and natural light diffusers, this daily moisturizer evens out skin tone and texture and immediately reflects light to bring out skin's natural radiance. Its fast-absorbing formula leaves skin soft and smooth and is clinically proven to improve skin tone and texture in as little as 4 weeks. Gentle enough for sensitive skin and daily use, this moisturizer is also oil free, hypoallergenic, noncomedogenic and contains SPF 15 UVA/UVB sunscreen. 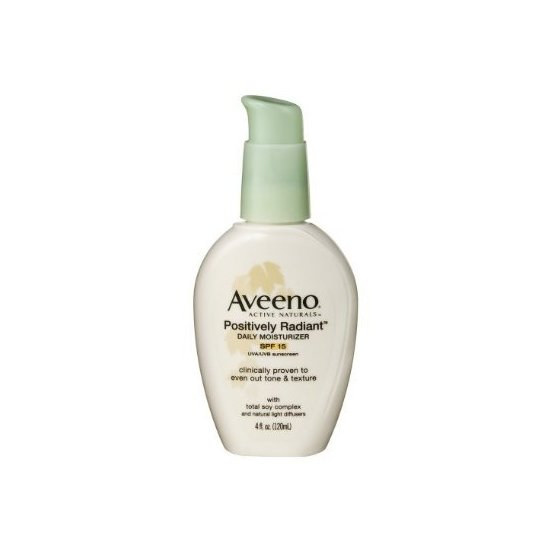 I've been using this daily for years. I absolutely love it. Doesn't leave my face greasy, and gives me an amazing glow. Don't know what I would do without it.

It’s got plenty of potential.....but ONLY for the right person.

I have oily skin, so the odd drama when it comes to finding a tinted moisturiser that is suitable for my skin concerns is not unheard of, especially when it has sun protection on board, because most sunscreens just don’t gel with my skin and bring about even more oil. Presented in a sturdy lockable pump top dispenser, the Aveeno Positively Radiant Tinted Moisturiser comes in two shades, 'Fair to Light' and 'Medium'. I opted for the later, which turned out to be a perfect match to my skin tone. I was a bit concerned that the formula, with its texture being thick like a foundation that included light-reflecting particles would only accentuate my oily skin even more…..and unfortunately it did!

Along with the makeup-like consistency, which actually blended like a charm, the first thing I noticed was the sunscreen-type fragrance that I am not overly partial to. It is quite subtle though and the scent soon fades away to nothing after it's applied to the skin. It initially promoted a sheer, natural-looking coverage that impressed me, as it evened out my skin tone considerably, masking any flaws, particularly the usual redness and blotchiness that my skin manifests during the hotter months. So, as well as hiding the ‘bad bits’ it complimented my personal skin colouring exceptionally well to achieve a ‘barely there’ existence and a refined, polished-looking complexion. The finish felt nice and lightweight on my skin, which I was thinking has to be a good sign, as whilst the dewy, glow looked acceptable after I had finished setting it with my normal translucent powder, those instant admissible results were sadly short-lived.

After going about my normal morning activities, I stopped to reflect on my appearance in the mirror and at first, I couldn’t tell if my skin was starting to look shiny or if it was just the shimmery Mica particles that were included in the ingredients. Although, before the morning was over, I touched my skin and this time, it was well and truly feeling greasy, so in hope, I applied some more translucent powder to try and help reduce the shine. By mid afternoon, with the day getting warmer, that coincides with the addition of humidity, I was looking like I had just jumped out of the deep fryer, covered in an oil slick of sorts. To top it off, as well all that the excess oil, my face was literally glistening (think shimmer, eww ) that also emphasised my problem. My face also looked quite patchy and the majority of the original flawless coverage had basically just separated and settled into any lines and crevices or had melted away entirely. Some of the remnants clung onto a couple of dry patches on my skin that I didn’t even know existed until they were brought to my attention by the unsightly flakiness that highlighted the fact.

Not one to give up so easily, I tried it again the following day, this time with a primer underneath. While it didn’t make a 'huge' difference by the end of the day, I did notice that the coverage lasted longer and wasn’t as greasy as the previous application. I continued using the tinted moisturiser (only collaborated with a primer) for a period of five days, however on the third day, I noticed a small pimple surfacing on my cheek, followed by two more the next morning and finally on the fifth day there was another one, this time right on my nose. That was the last straw! I found it to be quite overwhelming, because it certainly wasn’t ‘that time of the month’ when I AM inclined to get the odd hormonal blemish and considering other than this Tinted Moisturiser and the associated Cleanser, I have not added anything else or changed my standard, particularly strict skin care regime. I immediately ceased using the products, but when I am feeling braver, I might try introducing them one at a time, to determine which one or if both could possibly be the culprit. Even though I am convinced, knowing my own skin very well and not being one who breaks out too often, that most likely this particular formulation is just too rich for my oily skin. Whilst the product claims to be noncomedogenic, because my skin wound up so greasy, it’s my opinion that the excessive oil production is what also contributed to my breakouts. It’s not all bad though, as while I do have oily skin, I am also blessed with sensitive skin and I can ensure that these products didn’t cause any irritation or skin flare-up’s, so it is gentle and didn’t upset my skin at all.

With its mediocre price range, this product comes up trumps in terms of being economical, seeing as I only needed one pump per application, I dare say it will last for ages. Taking into consideration my skin is already oily and the weather is rapidly heating up, it would be safe to determine, these were the contributing factors to my ‘not so pleasant’ experience and the overall performance of this product in my case. While, I wouldn’t feel comfortable recommending this to anyone with oily skin, we are indeed, all different, therefore what works for me (or what doesn’t work in this case, LOL ) could actually be pleasantly surprising for other oily skinned beauties, so take it in your stride and if you are comfortable to give it a shot then go for it. I am of the belief that the Aveeno Positively Radiant Tinted Moisturiser would be more suited to those with normal to dry skin types, as the initial results I encountered, would have a far greater possibility of endurance to prevail a flattering, dewy, radiant-looking complexion, rather than one that resembles a luminous, disco ball.

Feels great on my face, so gentle. The smell is good also. Great light weight formula. My skin is dry no matter the season so this is perfect. Would most likely purchase again!!

I love this moisturizer. It makes your skin feel soft and helps to soothe irritation. I use it every morning and even mix it with my foundation to help keep away dry spots and cracks.

My skin is super sensitive. Put anything it doesn't like on it, and BAM. Angry acne straight up next morning. So over the years, I've collected a plethora of cleansers, moisturizers, skincare that just fail to work. Until I found this one. And ever since, I've been using it without fail every single day. It has a lovely smell to it. The cream is also light and absorbs quickly. It's gentle, and isn't sticky at all. Moisturizes even in the winter. The SPF is also handy, and brightens my complexion. Holy Grail product. Nuff' said.

The best moisturizer I've ever had

I have some major issues with my skin on my cheeks where I have issues with my rosacea. So rosacea causes redness and some stubborn acne in the places affected by it. So because of this condition I need to be very careful on what moisturizers I use. So I turned to aveeno because I know they have good and gentle products. This moisturizer is amazing! It really helped even out the redness on my cheeks. They're still a little red but no where near as bad as usual. It also did not irritate it like my last one did. It also took away all of my dry areas unlike others I've tried. There is sparkles in the product but I really liked that. After I apply my foundation it makes my skin look vibrant and almost flawless. The product does have a scent but I found it very pleasant. It has a light baby powder like scent that goes away once you rub the moisturizer in. The scent isn't overpowering at all which is great.

That was true for a while. However my skin got used to the moisturizer and I had to find another one. I recently tried this moisturizer again and within a week my skin was dry and flaking. It was good while it lasted, but I can't use it any longer.

This moisturizer is awesome...more so if it is used right after using the positively radiant face wash. The product comes in a small bottle however I only need one pump to get full coverage on my face and neck. Moisturizes all day( and I live in 30degree C everyday). Also my skin does feel like its breathing after putting this moisturizer on. Ive been using it for over a year now, and tons of people have told me how soft and smooth my face LOOKS(it definitely feels that way too) since then. My skin glows and most accurately is positively radiant!

I have very sensitive skin and very dry and have had problems with lotions breaking me out or not keeping my face moist enough. This lotion kept my face feeling moisturized all day and the SPF is a benefit as well. And not one pimple from this stuff. I had no problems whatsoever with this, and did repurchase it when I ran out.

I've been using Aveeno positively radiant daily moisturizer for 2-3 years now, and I am not going to change this product over anything else. It's AMAZING! My skin tends to be really dry and sometime oily as well, and when I first started using this moisturizer after I washed my face with the Ultra-Calming Foaming Cleanser by Aveeno I fell in LOVE!. So i bought other products that came from Aveeno and now i'm addicted!! I am recommending the Aveeno Positively Radiant Daily Moisturizer SPF 15. It's good for all skin type, it helps restore your skin in so many ways, and leaves your skin feeling smooth!

This product never settles into my skin completely, so sometimes under foundation it causes problems, but in the summer i like to just use this because it has SPF and it does improve the look of my skin a bit.