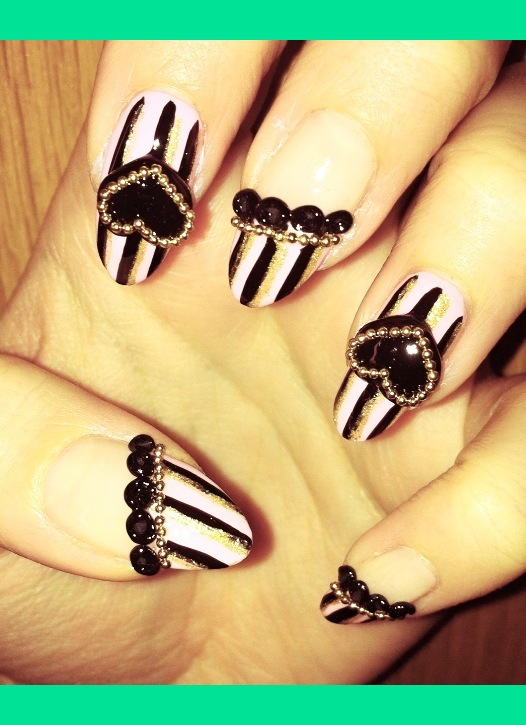 These nails are so cute.

Thank you so much sweetie! :D xoxo.

I admit I love makeup but when it comes to nails, I am terrible at doing my own :) I will take pic to nail tech see what she can do!! They are great though:)))))

Haha same here! I loove make up but I'm just very bad at it! I have like 3 looks I can do, that's it:D That's sweet, such an honor:) I wish u a nice weekend:) xx Sarah

Thank you soo much! They are very easy to make! U just need some clay:) xx Sarah

these are effin cuteee

Your nails are pretty, I like to look at them but I think I clean too much and wash my hands too much (germ freak -__-) to actually wear them

Thank you Sherry! Yes that's true! I still live with my parents so I don't have to a lot of stuff which could damage my nails:) Haha, you're totally right! I wash my hands also very often and if I have chunky pieces on them it can be annoying to get them dried... xx

You're welcome. I am still gonna have to watch that video you spoke of below. Haha yeah I would be super sad if I spent time doing that to my nails and then I messed it up by cleaning. -__- where did you learn to do this stuff?

Yes I have some of the videos linked to this page:) I think roses are so cute and easy to do! I don't have a video how to do roses for the nails but I have a video on DIY rose earrings.. For the nails you have to do them simply smaller^^ Yeah I accidentally ruin my nails very often, because I like to do them late and then I get tired and mess them while sleeping-.- I learned some stuff from japanese nail magazines.. Some basics like doing a clay rose I learned from youtube.. Often I have a main idea, like a color or a deco piece.. I then built a design around it:) But if you want to do such chunky nails without wearing them, you could to them on fake nails:) It is fun and you won't ruin them:D xx

love at first site , i luv these nails !!! mind writing a toturial ?

Thaank youu! No, I would be very honored if you write one:D Or do you mean I should write one? :D I have posted a video tutorial on it, if you'd like to check it out^^ xx