Hair Secrets From "The Hunger Games" 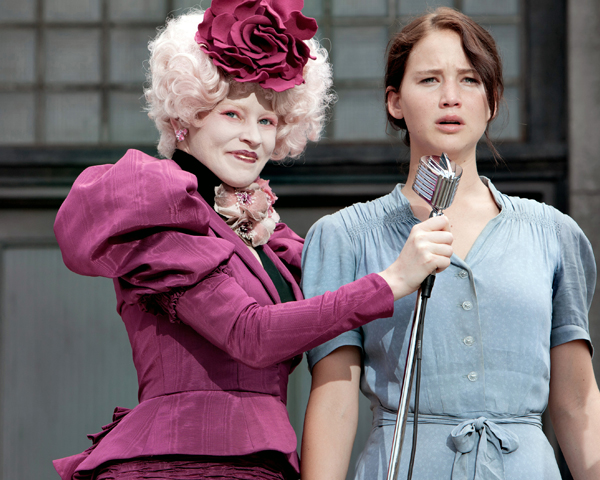 Lime green locks, a blue bob, and a helmet of braids! These are just a few of the wild looks The Hunger Games fans can expect to see when the first part of the epic book-trilogy-turned-movie hits the silver screen in March. But not to worry, all of these outrageous 'dos are done with taste. "One of the biggest challenges was including all of the Capitol characters’ colors without turning it into a Halloween party," says lead hairstylist on set, Linda Flowers. "We wanted it to look couture." An important trick in pulling it off? Balancing the futuristic shades with retro styles. "I used a lot of classic hair shapes from the '30s, '40s, and '50s," describes Linda. But that wasn't her only trick! From Katniss' signature side braid to an A-list actor’s long blonde surfer wig, keep reading as Linda reveals a lot more behind-the-scene beauty spoilers.

Q: How did you decide on Katniss' side braid style?

I thought about her character's reality—she’s a hunter who is active and very physical. So I wanted something easy that an athlete would wear and most importantly wouldn't get in the way of her bow and arrow. That's how I decided on the side braid. I also wanted the braid to be visible from all camera angles, so I had it start on the left side of her head and wove it around to the right.

Q: How did you create the look?

First, I started by prepping her hair with the TopStyler to give it texture and movement. Once the curls cooled, I French-braided the hair from the left side—hugging her head all the way around the nape of her neck—and ended on the right side.

Q: Will braids be part of Katniss’ signature style?

Yes, during the scene when she rides a chariot in the Capitol wearing the dress that’s on fire, we mixed in ten different plait styles into her updo. It was like a headdress of braids!

Q: What was your favorite hairstyle for Katniss?

During her interviews in the Capitol we did a '50s inspired look with loose finger waves that were brushed out. It was soft and glamorous.

Q: What can you tell us about the rest of the tributes?

We chose to create very simple hairstyles for the rest of the tributes because we wanted them to seem sympathetic. For Fox Face we did sort of hair pom poms on the sides, like very cute ears as a play on her nickname.

Q: What can you tell us about Elizabeth Bank's transformation into Effie Trinket (top, left)?

Effie has two wigs: lavender and lime green. I wanted to keep her classic but contemporary, so first I created a '30s-inspired finger wave bob, brushed it out, then I layered in a few fuzzy pieces for more texture. I used a lot of fuzzy texture for all of the Capitol character’s looks.

Q: What were some of your other favorite looks?

Stanley Tucci plays Caesar Flickerman and he is like the Ryan Seacrest of The Games. He wears a navy blue wig that's very Karl Lagerfeld-esque. He also has over-laminated fake teeth and lifts on his eyes that make it look like he's had a lot of work done. Watching him be so animated was really funny! Also, Woody Harrelson—who plays Haymitch Abernathy—is in a blonder surfer-like wig.