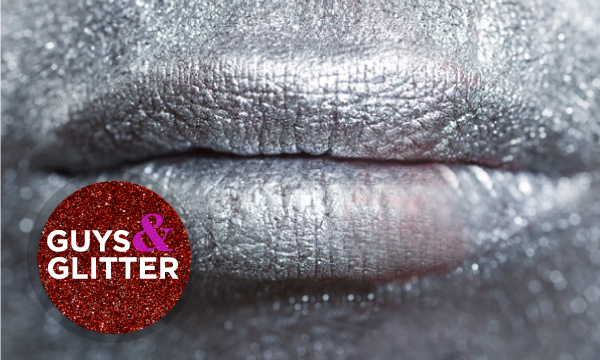 Three movie theaters can be found within a few blocks of the department store I work in and, The Twilight Saga: Breaking Dawn Part 1 movie release has been keeping my counter busy. Plenty of movie-goers have come in for quick makeovers. It’s always great to have customers who are excited about something, but nothing quite compares to one boyfriend who wanted to do something special for his Twihard girlfriend.

When boyfriends visit the counter, they’re typically waiting around. This one wanted to do something nice for his girlfriend, so while she made a quick restroom run, he sat and asked me to turn him into Edward Cullen. 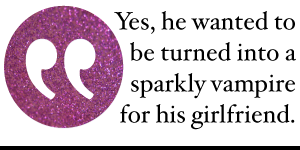 I started by adding more shadows to his face. Vampires tend to have dark circles and contoured cheeks, so I thought adding some darkness to his face would be enough. But he really wanted to go all out to surprise his girlfriend and told me he wanted glitter.

Yes, he wanted to be turned into a sparkly vampire for his girlfriend. It posed a challenge for me because we don’t keep spray glitter at the counter, but I improvised. I used the only cosmetic body glitter we had and mixed it with body moisturizer.

I added the glitter to his face, neck, and arms. He looked a little paler than usual because of the moisturizer, but this was perfect. He had a nice subtle shimmer, but he wanted more. To enhance the look of glitter, I added an illuminating powder, which also made his pores smaller. A flawless face is essential when you’re a 110-year-old vampire.

I was adding the last touches to his makeup when his girlfriend saw him. She was practically in tears from laughing so hard while I added a red lip stain for that “just bitten” look. Girls, it may not be such a bad idea to take your boyfriend to the makeup counter once in a while. You may be in store for a great surprise.

Undercover Beauty Agent is just an average makeup artist at your local beauty counter who's reporting true stories exclusively for Beautylish: "I love what I do because I get to make people feel beautiful on a daily basis. I'm a beauty advisor in New York City by day and a secret beauty agent by night, totally ready to share all my insider secrets and gossip."