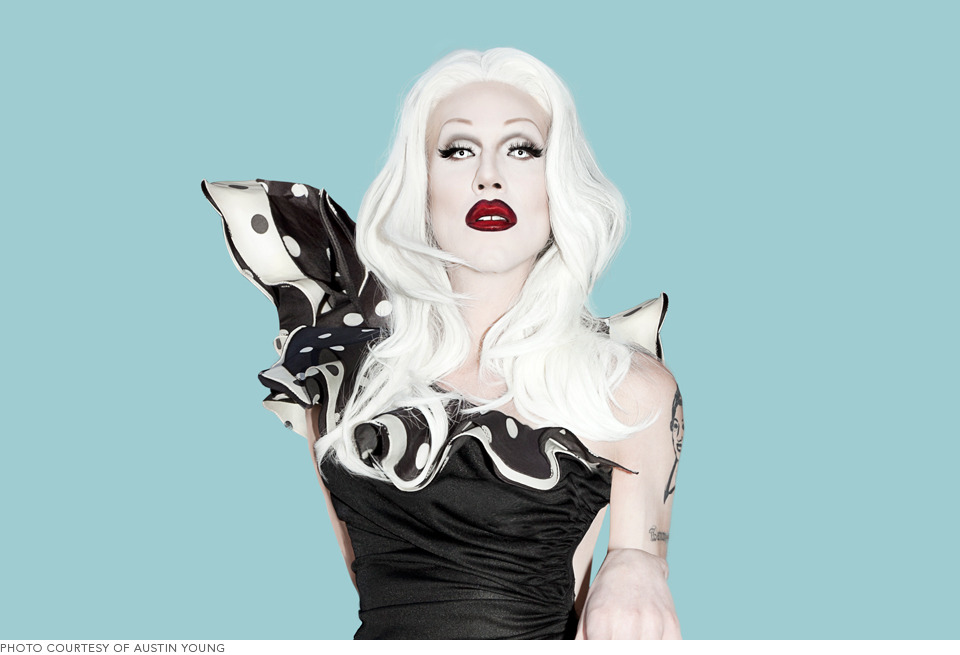 After Sharon Needle’s big win on RuPaul’s Drag Race, the entire country has been introduced to scary-sexy drag. With her flawlessly painted face and goth-vamp style, Sharon’s stint on national television raised the bar not only for drag queens, but for anyone who wants to turn heads and look different. Her eerie antics and punk rock persona keep fans lining up for post performance photos with her, but it’s her edgy approach to beauty that really inspires us here at Beautylish.

Since crowned this season’s Drag Race Queen, Ms. Needles has become a cover girl for beauty’s dark side. We’re seeing gothic imagery not only in the clubs, but in day-to-day looks as well. It’s still a far cry from average, but creepy couture is officially “in.”

Sharon wears her morbidly unique with exquisite confidence. With her influence, Marilyn Manson-style mismatched eye contacts are now seductive, and she can be credited as one of the leaders of the black lipstick movement. She’s come out with her own line of Halloween latex face masks, modeled in her likeness, to keep even her least makeup savvy minions looking Needle-sharp at any costume party.

Take some devilish downtime with us as we talk with Miss Needles about her journey in drag, her makeup secrets, and her favorite holiday—Halloween! 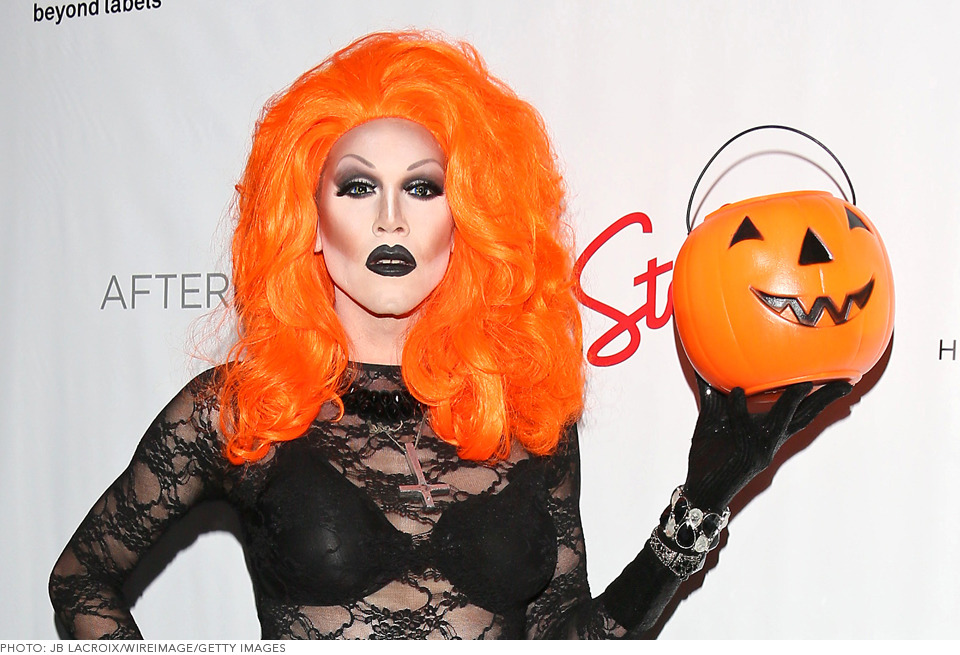 B: How did your obsession with Halloween begin?

The reason I love Halloween so much is because growing up, it was the only time I was allowed to dig in the makeup boxes and hide behind this sort of fantastical creature that I would create. I think a lot of drag queens can attest to that as children.

B: What was the inspiration behind your signature look?

I was really inspired by horror movies. But the idea behind Sharon Needles also mixes in the Eighties semi-misogynistic exploitation of women, which was called The Bimbo Generation. Sharon is very much a mixture of Peggy Bundy and Elvira with a little bit of Rhonda Shear to keep you up all night.

B: How did you come up with your name?

B:You exude confidence in drag. How did you gain the courage to become Sharon Needles?

I think my confidence came not necessarily from courage, but from child-like innocence. I grew up in Iowa and started dressing in drag at fifteen. I’ve always liked shocking people and getting attention—I even like negative attention! I think the true art of drag is to always push buttons and be a piece of social commentary. For me it’s also about being a punk-rock brat so I kind of feed off negative attention. 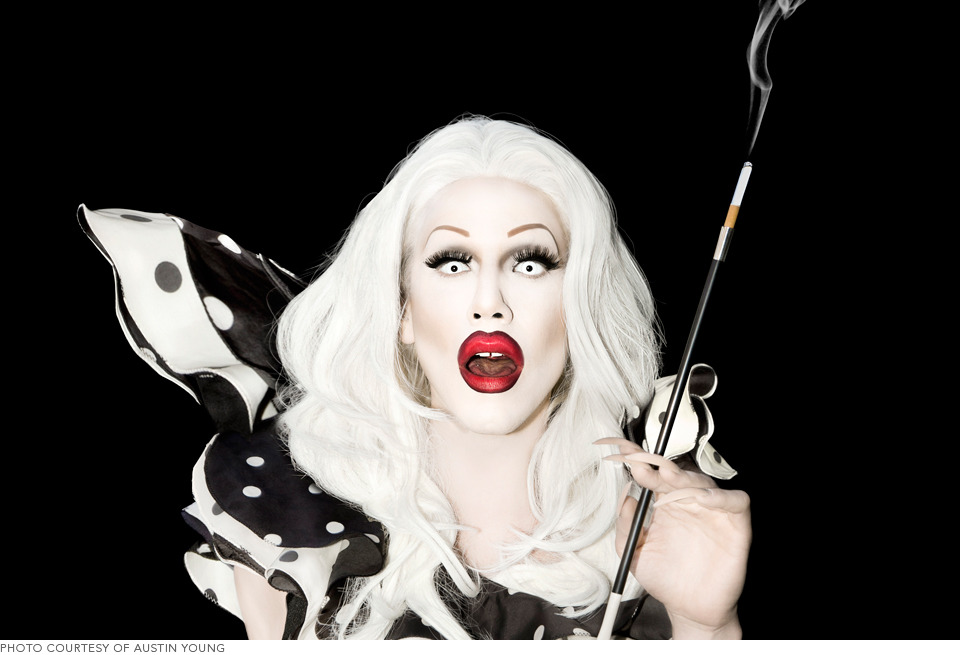 B: Have people’s attitudes toward your look changed since winning "RuPaul’s Drag Race?"

Of course! No matter what city I’m in, they are always sold out of white contacts! I’m not sure whether or not I had a part in it, but there definitely seems to be a revival in macabre drag aesthetics and I like that. Some people call it “goth” but I think it’s more macabre and death-oriented. I mean, no one ever calls Alexander McQueen “goth”.

The way I look at it is: if gays are the minority in that we don’t have the same rights that other minorities have sought after and achieved, then we should look like monsters. We shouldn’t look like tanned over-plucked faggots, we should look scary. If we’re going to be feared we should definitely look the part.

B: What on earth are you going to dress as for Halloween?

Halloween season is really busy for me so I have to consider where I’m going to be working and performing when it comes to dressing up. I’m toying with dressing as Vincent Price. I love to dress as a boy on Halloween since I never get to develop a male character. In previous years, I’ve gone as a clown as well as Pee Wee Herman! I also have this idea of dressing as Bride of Frankenberry which I imagine would involve a pink beehive with pink pointy eyebrows and a lot of distressed gauzy pink fabric. My other idea is to be Latrice Royale.

B: That would be hilarious and potentially offensive.

Well, you know me! 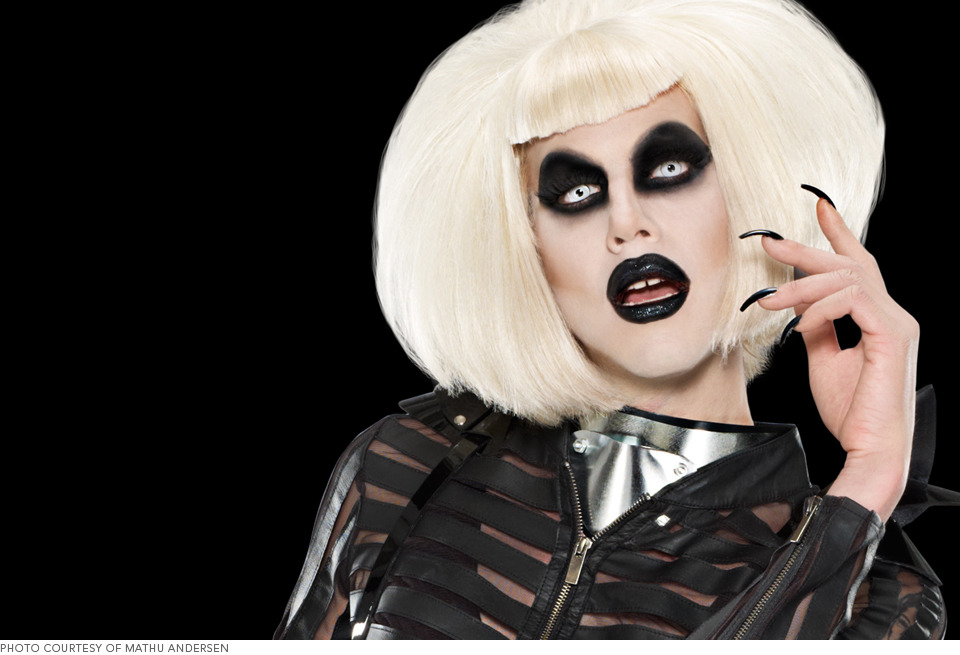 B: Do you have a favorite black lipstick?

No, I hate black lipstick! I can never find one that works well. My black lips are lined with MAC Pro Liner and filled with Ben Nye Cream Full Color Black Foundation. Depending, I sometimes go over them with Obsessive Compulsive Cosmetics Lip Tar in Tarred and set them with Make Up For Ever black glitter dust. I take black lips very seriously!

B: As you should! What products do you use on the rest of your face?

I love MAC Studio Fix in N2. It’s the best foundation for girls who need to have it done quickly with full coverage. I also has the best foam sponge applicator in the world that will never crumble. Really though, my foundation is a process. I do a mixture of the lightest cream color foundation by Ben Nye mixed a combination of N2 MAC under eye concealer and CM4 Dura Color tattoo cover foundation. I set the whole thing with the Mac Studio Fix foundation and highlight with Ben Nye Clown White loose pigment.

Being on stage causes you to sweat more than the average person and this combination is a true formula for sweat-resistant foundation. In the old days it didn’t matter if I began to fall apart on stage because no one would see me afterward, but now I conduct meet-and-greets after I perform. I’m expected to look flawless for these photographs with my fans, and this formula makes it possible. I can basically swim in it, sleep in it, and then wake up and be ready for a show. 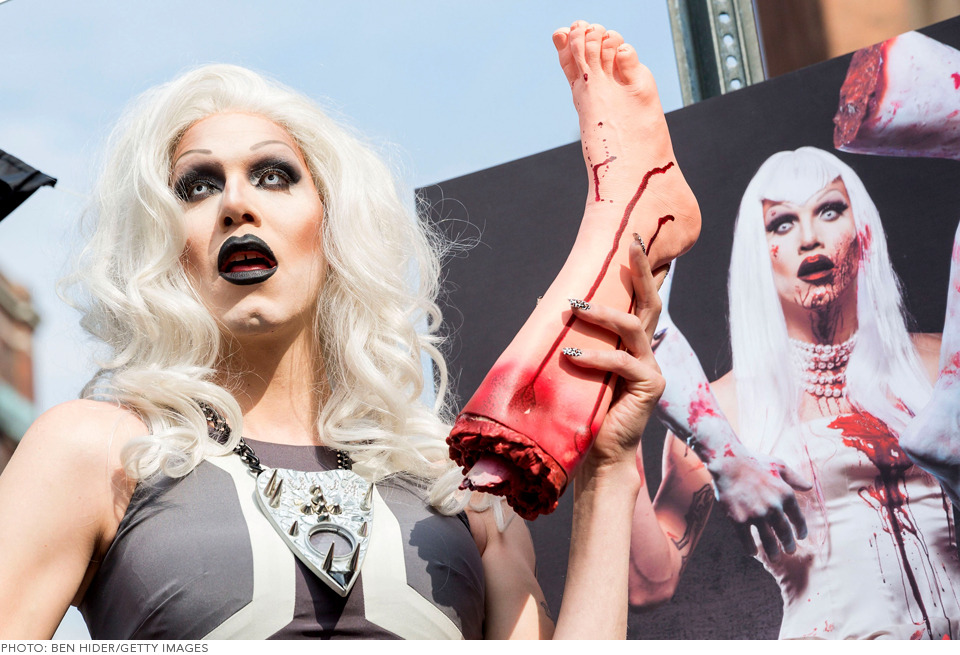 B: How can Beautylish readers get a spooky look fast?

Nothing in beauty should ever be fast. Though I think women look the most beautiful without makeup, I say if you’re gonna wear it, wear it—and wear a lot of it. Also never be afraid to look around the house for items you can use as makeup. My dad works at a maximum security prison and he tells me all the trannies make cake eye liner out of cigarette ashes and lipstick by letting Kool Aid evaporate until it becomes a gel. It just proves how resourceful the LGTBQ community can be in a pinch! 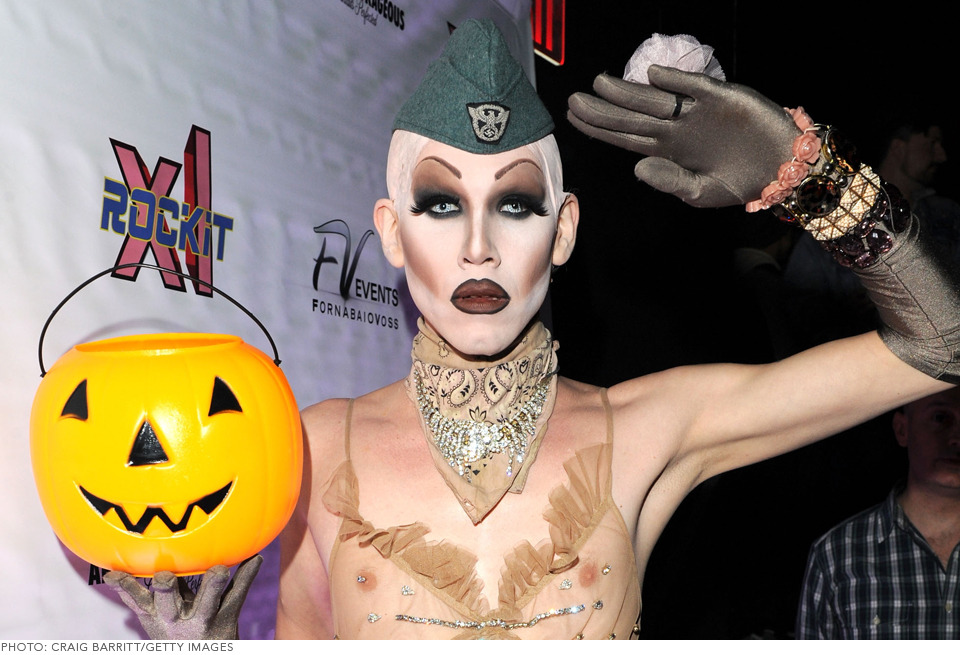