Karl Lagerfeld Gives the Commander in Chief a Makeover 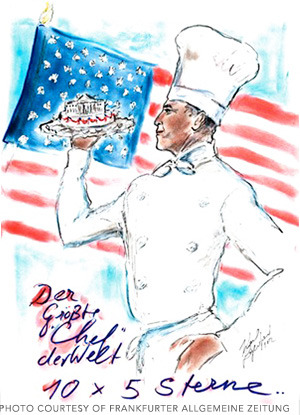 He's known for highly acclaimed collections, his distinctly Deutsch look, and a social media savvy kitty, but last week Karl Lagerfeld played the part of politico, lending his artistic skills in honor of Barack Obama's reelection. After discovering the president won at six in the morning his time, the creative dynamo got to sketching—using of course, his trusty shu uemura makeup. The illustration of the president, which appeared last Thursday on page nine of national German newspaper Frankfurter Allgemeine Zeitung, depicted Obama as the "The Biggest Chef in the World," decked out in full kitchen regalia. We're just wondering which of shu's patriotic palette made the cut.